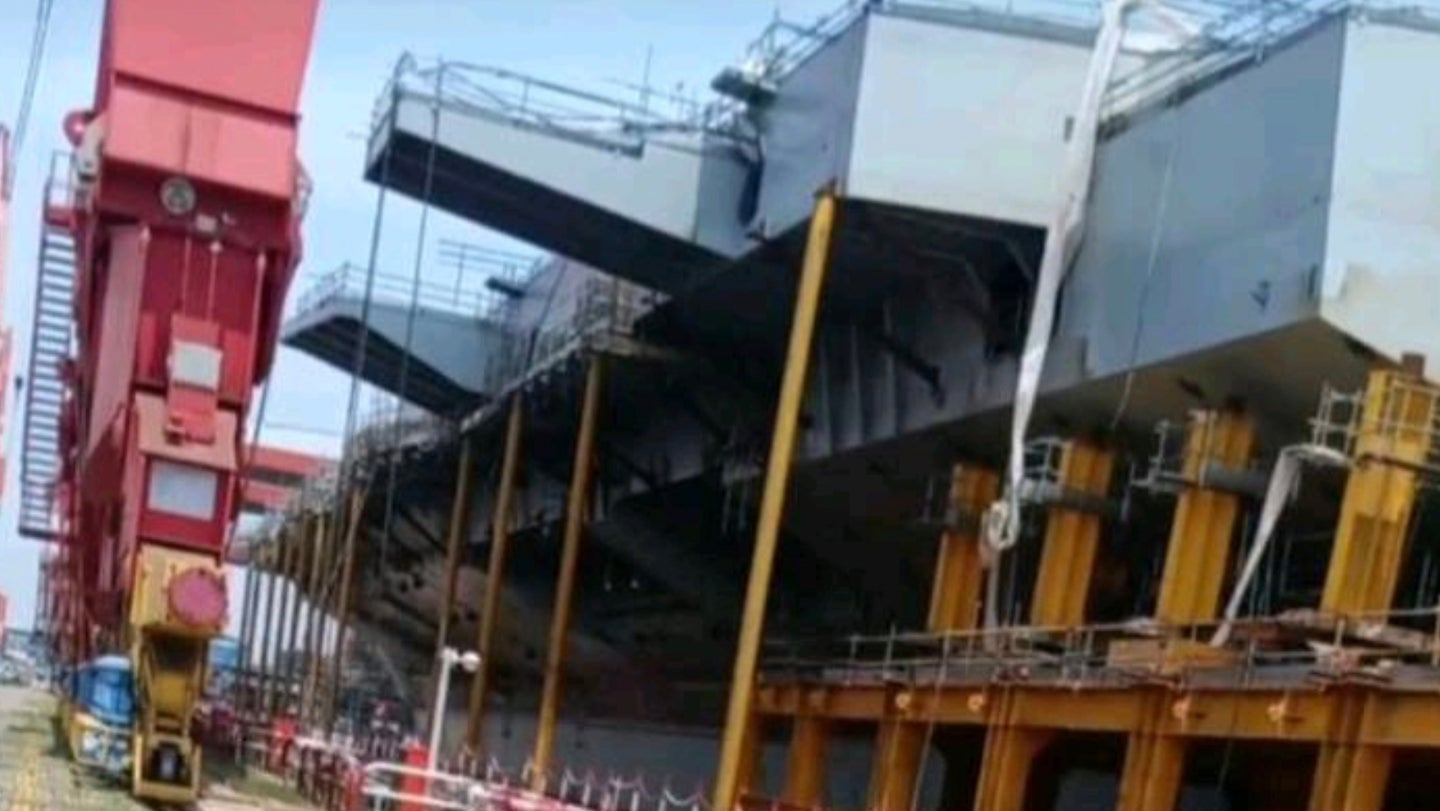 Work is well underway on the next aircraft carrier due to join China’s fast-expanding navy. A leaked photo now brings us our closest view yet of the vessel, which is set to provide the People’s Liberation Army Navy, or PLAN, with a significant leap in capabilities, including catapults for launching aircraft, a major advantage over the service’s previous two, smaller aircraft carriers with their “ski jump” takeoff ramps.

The as-yet unnamed new carrier, currently known by the designation Type 003, has been under construction at the Jiangnan Shipyard outside Shanghai since at least late 2018. Earlier this week, it emerged that a Tik-Tok user had managed to take a very close-up photo of the vessel, shot from drydock where it is being built, and upload it to that social networking service. The image was deleted soon after, but not before it had been saved and shared elsewhere online.

Although not conclusive, the image seems to quash recent speculation that the carrier would feature a third aircraft elevator on the port side toward the stern, to complement the two starboard-side elevators. The elevators are necessary to move aircraft between the hangar and flight decks; the more lifts available, the greater the capacity to move planes around. In comparison, the U.S. Navy’s Nimitz class design has four elevators. At the same time, more elevators can actually complicate how space is used on the flight deck and the U.S. Navy decided to have three aircraft elevators on the latest Ford class carrier, with the size and position of these lifts intended to enhance operations. The two previous PLAN carriers have two elevators each, on the starboard side.

To date, most imagery of the new carrier had been limited to satellite and other aerial imagery of varying quality. The three huge modules that make up the bulk of the Type 003 were in position in the drydock by July last year, with most of the keel and lower parts of the hull joining them by September.

Using this earlier imagery, some observers have extrapolated that the warship will likely have a displacement greater than the figure of 80,000-85,000 tons originally projected. This would bring it closer to the U.S. Navy’s own supercarriers, which have a displacement of around 100,000 tons.

What’s more, the Type 003 design is expected to be equipped with an electromagnetic aircraft launch system (EMALS), rather than relying on the “ski jump” ramps used on the PLAN’s two in-service carriers, the Liaoning (Type 001) and Shandong (Type 002). The use of EMALS could potentially boost sortie-generation rate on the new carrier, despite it apparently not featuring additional aircraft elevators.

Introducing an EMALS is a significant technological challenge, one that has faced its fair share of problems in the United States, but if perfected will allow the PLAN to operate larger and heavier carrier aircraft, such as fixed-wing airborne early warning (AEW) platforms, and to launch and recover existing J-15 multirole carrier fighters at heavier weights, with a significant increase in the number of sorties the carrier can generate. EMALS would also permit the carrier to launch lighter drones, a prospect that we have examined in detail in the past.

Even if the Chinese EMALS fails, or if the equipment is not ready in time for the Type 003, the alternative conventional steam catapults that have also been tested would also present a big advance compared to the “ski jump.” Unlike the U.S. Navy’s supercarriers, the Type 003 is expected to use conventional rather than nuclear propulsion.

Overall, the Type 003 represents an optimized original aircraft carrier design that will incorporate lessons learnt during initial operations with the Liaoning and Shandong. The first of these is the former Kuznetsov class carrier Varyag, which was transferred to China by Ukraine, entered service in 2012, and declared initial operational capability in 2018. The second, Shandong, while built in China, follows very similar design principals to the Liaoning and entered service in late 2019. On at least one occasion, the first two carriers have taken part in joint operations.

What’s clear, above all else, is the speed with which Beijing is developing its aircraft carrier capabilities. Progress on the Type 003 build has been impressive, despite the effects of the COVID-19 pandemic. Some reports predict the Type 003 could be launched next year, which would tally more or less with an unclassified February 2020 report from the Office of Naval Intelligence anticipating that that the carrier could enter service in 2024.

While the Type 002 project was less ambitious, it’s still noteworthy that it was only around five years between laying the keel for the future Shandong and that vessel’s commissioning into service. Just as important as the speed at which this was achieved is the experience that will have been gained by the China’s shipbuilding industries that are now working on the Type 003 and which will surely build more carriers in the future, too.

Unconfirmed reports last year suggest that work on PLAN’s next carrier — the Type 004 — was due to start soon, possibly at Dalian Shipyard in Liaoning. There are persistent rumors that this vessel will be both larger than its predecessors and will be nuclear powered, but other assessments suggest it will utilize the Type 003 design. Ultimately, however, it seems likely that nuclear power will be the PLAN’s goal.

Western reports have frequently speculated that the PLAN may eventually build a force of six aircraft carriers. On the other hand, other observers claim that Beijing ultimately plans for “10 or more” carriers, which would clearly be a much longer-term ambition.

While the carriers themselves seem to be proceeding at an impressive pace, developments within the PLAN’s burgeoning carrier aviation branch are a little less clear.

Production of the original J-15 carrier fighter, suitable for non-catapult operations from the decks of the Liaoning and Shandong has so far yielded at least 36 production aircraft, Chinese military aviation expert Andreas Rupprecht told The War Zone. Since the allocation of serial numbers is somewhat confusing, the actual total may be greater, but Rupprecht expects that production could eventually yield as many as 60-70 J-15s to serve the first two carriers’ air wings.

A catapult-capable version of the Chinese naval Flanker, sometimes described as the J-15T, has also now been tested from land bases and there are meanwhile also reports of a so-called J-15B version equipped with advanced radar, avionics and weapons. It would make sense, of course, if all these features were brought together in a production version of the catapult-capable Flanker to operate from the Type 003, as well as the Type 004 and potential future carriers. Rupprecht considers it likely that the J-15T — two of which have so far been identified — are essentially intended as demonstrators for the future, catapult-compatible J-15B.

The ultimate fate of the J-15 may also depend on progress made with a widely rumored carrier version of the FC-31 stealth fighter, possibly designated J-35, although this is unconfirmed. Since the basic design of the J-15 dates back to the Cold War-era, Soviet-designed Su-33, and it has come in for criticism on more than one occasion, it does seems likely that China is already be working on a more capable successor, although, despite plenty of rumor, so far there is no firm evidence of a navalized FC-31.

The introduction of catapults on the Type 003 also opens the door to embarking a fixed-wing AEW aircraft, a prototype of which is already under test, a fact initially confirmed by photos that appeared last summer. The twin-turboprop KJ-600 is analogous to the U.S. Navy’s E-2 Hawkeye and appears superficially similar. Once fielded aboard the Type 003, the KJ-600 promises to revolutionize the way the PLAN carrier air wing operates, providing long range surveillance against air, sea, and land targets as well as battle management and networking capabilities. The PLAN already has some experience with carrier-based AEW assets, in the form of the Z-18J, a derivative of the Z-18 heavy-lift helicopter with a retractable radar antenna attached to the rear ramp.

All in all, the PLAN’s burgeoning carrier capability reinforces the great lengths to which Beijing is going to match the U.S. military in the region and to develop its power-projection and true blue-water capabilities. Inevitably, this is seen against the ongoing tensions between China and the United States, especially in the flashpoints of the Taiwan Strait and the South China Sea.

In its 2020 report to Congress on the Chinese military, the U.S. Department of Defense pointed to the Type 003 in particular as a major development within its planned multi-carrier force:

“China’s next generation of carriers will have greater endurance and a catapult system,” the report reads. “In particular, China’s aircraft carriers and planned follow-on carriers, once operational, will extend air defense coverage beyond the range of coastal and shipboard missile systems and will enable task group operations at increasingly longer ranges.”

The PLAN clearly has ambitions further afield, too, evidenced by its decision to establish a new naval base in Djibouti, in a strategic position close to the entrance to the Red Sea, which U.S. officials consider will be suitable for supporting aircraft carriers. There are also two new Fuyu class fast combat support ships that have been specifically tailored to support aircraft carrier operations.

On the other hand, it has to be remembered that China is still very new to the aircraft carrier game. Few other countries that have operational carriers regularly embarking fixed-wing aircraft and while the PLAN may be the latest to join this elite club, it will still require many more years of experience before its carrier arm reaches its full potential.