One of Iran’s most important naval vessels, previously the biggest in its fleet, the Islamic Republic of Iran Navy replenishment ship Kharg has caught fire and sunk in the Gulf of Oman, with the cause of the blaze still under investigation. The fire reportedly broke out in the engine house at around 2:25 am local time today and the ship sunk around 20 hours later, after efforts to put out the blaze failed.

Reports from semi-official Iranian news agencies suggest that approximately 400 crew were on board as part of a training mission. All were apparently evacuated by other boats and helicopters before the 679-foot ship went down around six miles from the Iranian port of Jask, near the Strait of Hormuz. A spokesman from the Iranian Navy said the fire was so intense that half of the ship’s hull melted and broke off. Around 20 sailors apparently received minor injuries during the incident and some received treatment at the naval hospital in Bandar Abbas, a port city in southeastern Iran that is situated along the strategic Strait of Hormuz that is home to the Iranian Navy's main base of operations.

The IRIS Kharg was ordered during the rule of the Shah and completed in the United Kingdom in 1977 as a modified Ol class fleet replenishment oiler. Post-revolution, it was finally delivered to Iran in 1984 after protracted negotiations. The vessel served in the Iran-Iraq War, but since then, it has been increasingly used to support operations further from Iran's own shores, including venturing as far as the Asia-Pacific region, with a visit to China in 2013. Other high-profile actions included anti-piracy missions in the Arabian Sea and the Gulf of Aden.

Although completed as a replenishment ship to support other vessels underway at sea, the Kharg has also been used to transport cargo and as a helicopter platform, with both a helipad and hangar facilities. For many years, the Kharg was essentially the only Iranian naval ship capable of longer-range operations and as such its capabilities were regularly talked up to an absurd degree, with it frequently being described as a ‘helicopter carrier.’

The cause of the fire is unconfirmed, but so far there are no indications one way or the other that the incident might have been the result of hostile action. However, the loss of the vessel comes after a period in which there has been a series of explosions aboard other ships in the Gulf of Oman, although, so far, none have apparently sank. The U.S. Navy has blamed Iran for targeting vessels with limpet mines and has presented footage showing members of Iran’s Revolutionary Guard removing an unexploded example of one of these devices from a ship. Tehran has consistently denied these accusations.

There have also been apparent tit-for-tat operations by both Iran and Israel targeting shipping, including reports of Israel conducting clandestine attacks on Iranian ships carrying oil, as well as weaponry, to Syria, where it is supporting the regime of Bashar Al Assad. According to the Wall Street Journal, Israeli began this campaign against Iranian shipping in late 2019 and has since targeted at least a dozen ships with weapons including naval mines.

In April this year, the M/V Saviz, an Iranian government widely believed to be a mothership for the country’s Islamic Revolutionary Guard Corps, seen in the video below, was also the victim of an attack in the Red Sea. The ship is though to have been used to assist Houthi rebels in Yemen and conduct other types of clandestine operations in the region.

Meanwhile, Iran and its regional proxies have been blamed for a series of attacks on tankers sailing in the Gulf of Oman in the past year. Last November, for example, a Maltese-flagged oil tanker was the victim of an apparent naval mine, or perhaps a limpet mine, in the Red Sea, an event that we discussed here.

Once again, there is no indication so far that the Kharg may have become a target for one of Iran’s rivals and it would not be the first time that a naval disaster has struck the country. Last July, an Iranian missile mistakenly hit a friendly vessel during a military training exercise, also near Jask. On that occasion, 19 sailors were killed and 15 wounded.

In 2018, meanwhile, an Iranian destroyer, the IRIS Damavand, sank in the Caspian Sea, after hitting a breakwater in an incident that claimed the lives of two sailors.

There is also no evidence that the Kharg was in any way related to an ongoing mission involving apparent Iranian support for Venezuela. The Iranian Navy’s recently commissioned forward-basing ship, IRINS Makran, a converted oil tanker, left its port in April carrying seven high-speed missile-attack craft on its deck. Reports suggest that the vessel is heading to Venezuela, although Iranian officials have neither confirmed nor denied this.

While the Makran offers some of the same capabilities as the Kharg, today’s incident represents a significant loss for the Iranian Navy, especially in terms of its capacity to conduct operations further afield. While there are two Bandar Abbas class fleet oilers available, these are much smaller and altogether less capable.

Whatever the reason for the fire aboard the Kharg, its loss will surely be felt by the Islamic Republic of Iran Navy as it increasingly looks to operate further from its traditional operating waters in the Gulf of Oman. 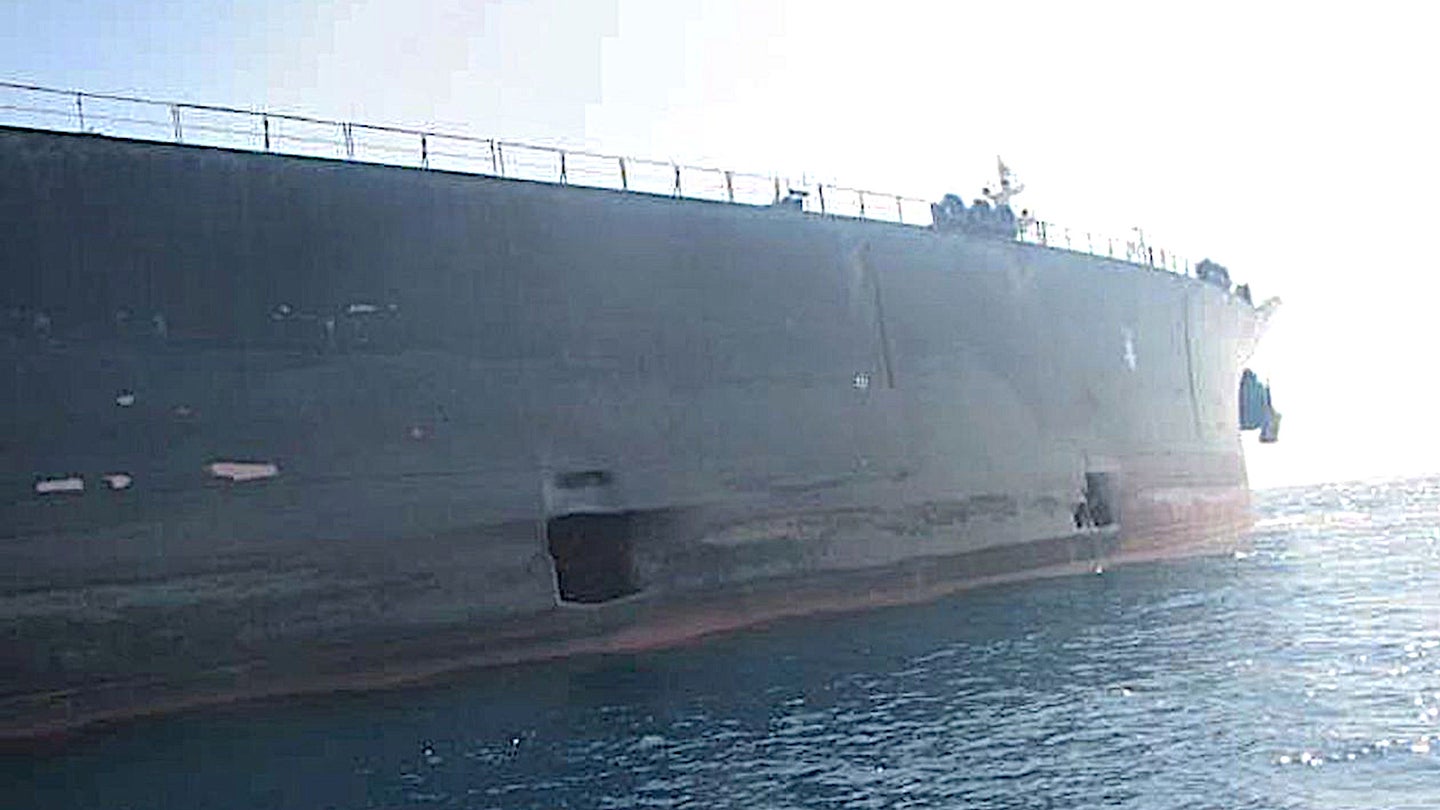 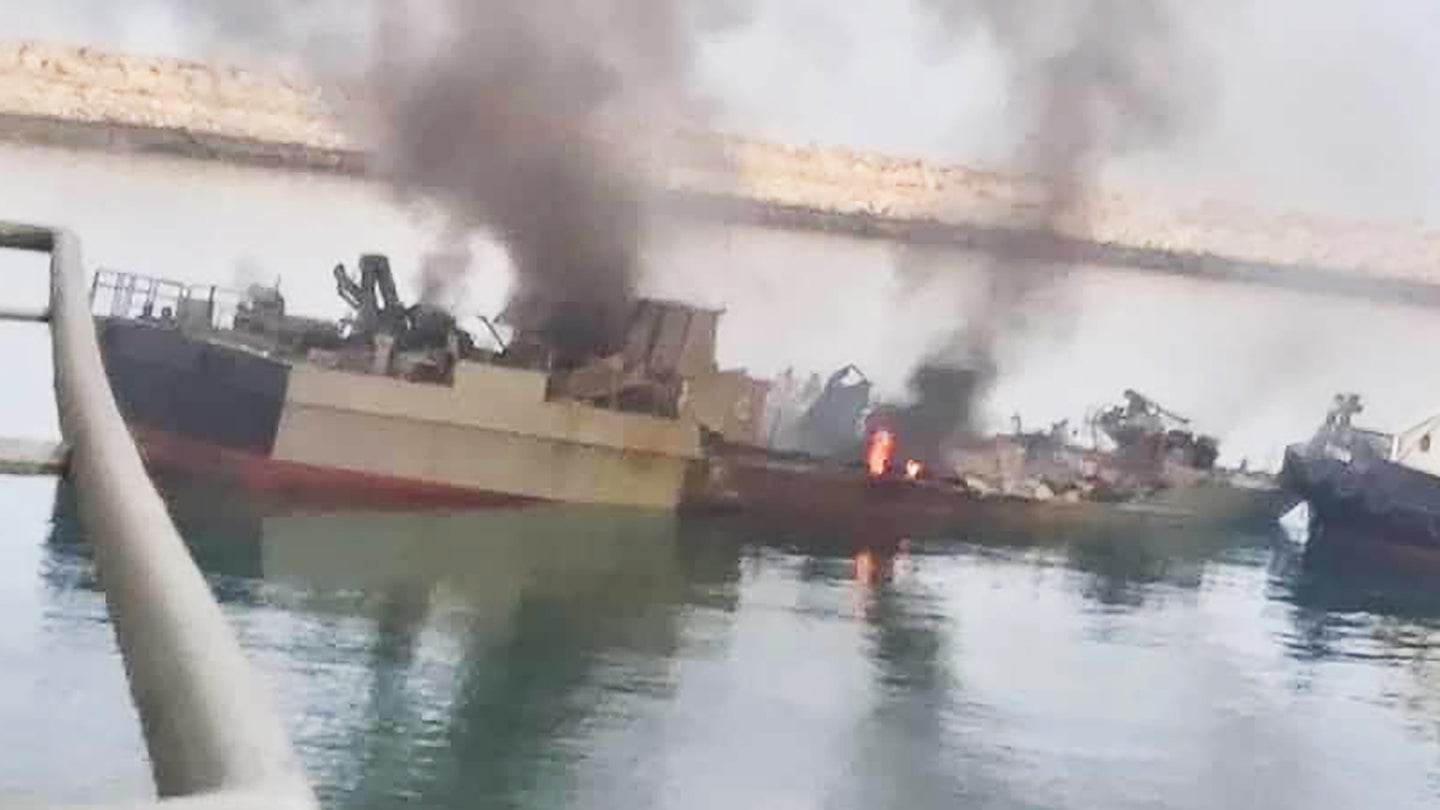