Next year, the Air Force wants to test a way to move a C-17's worth of cargo, and potentially personnel, extremely quickly to any location on Earth. 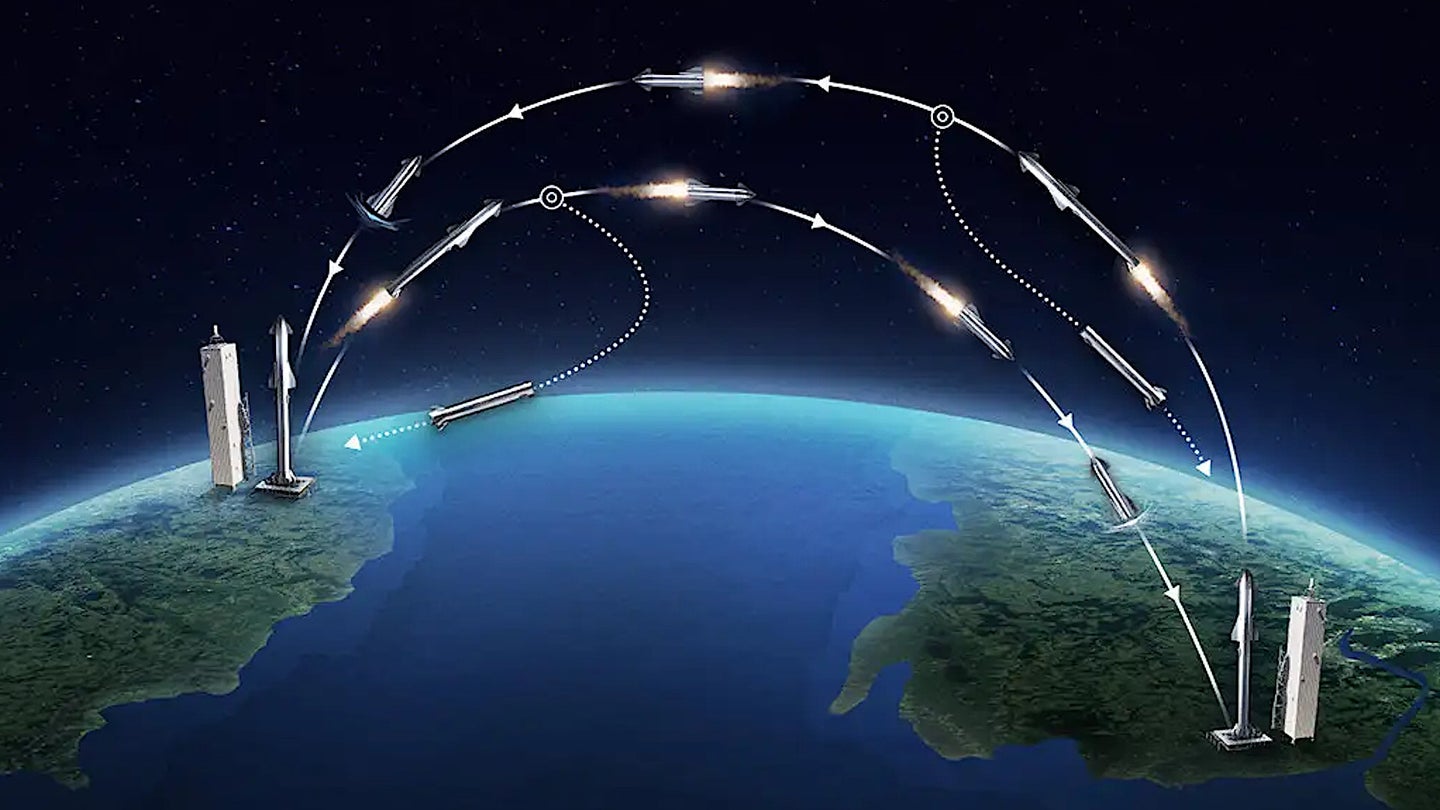 The U.S. Air Force has released new details about its questionably ambitious plans to develop a capability to send payloads weighing up to 100 tons, including cargo and potentially personnel, roughly equivalent to the maximum load of a C-17 airlifter, anywhere in the world within one hour via a space launch rocket or derivative thereof. The service now wants to demonstrate the basic feasibility of this concept in a real end-to-end test next year.

This and other information is contained in the service's proposed budget for the 2022 Fiscal Year, which includes a request for nearly $48 million in additional funding for this program. This is an almost five-fold increase over the funding it received for this project for the current fiscal cycle. The Air Force 2022 Fiscal Year budget request, which was released on May 28, 2021, as part of the larger proposed budget for the U.S. military as a whole for that fiscal cycle, also identified the blandly-titled Rocket Cargo program as one of the service's "Vanguard" efforts. The service first unveiled the concept of Vanguard Programs, a way to identify advanced research and development efforts of particularly high interest, last year. Rocket Cargo is the fourth Vanguard, with the others being the Skyborg initiative to develop an artificial intelligence-driven "computer brain" able to fly various types of future unmanned aircraft, the Golden Horde networked swarming munitions project, and the Navigation Technology Satellite 3 (NTS-3) effort.

"The Department of the Air Force seeks to leverage the current multi-billion dollar commercial investment to develop the largest rockets ever, and with full reusability to develop and test the capability to leverage a commercial rocket to deliver AF cargo anywhere on the Earth in less than one hour, with a 100-ton capacity," the service's budget documents explain about the main goal of the Rocket Cargo program. "The Air Force is not investing in the commercial rocket development, but rather investing in the Science & Technology needed to interface the capability with DoD logistics needs, and extend the commercial capability to DoD-unique missions."

This is roughly in line with how U.S. military officials have described this concept in the past. In October 2020, U.S. Army General Stephen Lyons, head of  U.S. Transportation Command (TRANSCOM), talked about the potential to move "the equivalent of a C-17 payload anywhere on the globe in less than an hour." The official Air Force fact sheet for the C-17 Globemaster III cargo aircraft says its maximum payload capacity is approximately 82 tons.

At that time, Lyons had announced partnerships with SpaceX and Exploration Architecture Corporation (XArc) to further explore this concept. SpaceX has been a pioneer in the development of reusable rockets for space launch purposes, while XArc is a consulting firm offering primarily space-related design services. Artwork associated with the Rocket Cargo program that the Air Force has previously released, seen at the top of this piece and below, has depicted what appears to at least be a derivative of the SpaceX's Starship spacecraft, which the company is developing now to carry cargo and passengers for commercial purposes.

The Air Force's latest budget proposal talks about using traditional, as well as non-traditional contracting mechanisms, such as Cooperative Research and Development Agreements (CRADA), to support the Rocket Cargo effort. The Air Force also appears to have formally started the Rocket Cargo program as its own distinct project outside of any broader advanced research and development initiatives last year. The service received just over $9.7 million in funds for the project, which it also describes as a "major thrust," in its 2021 Fiscal year budget.

Almost all of that funding was reallocated from a general "Future Transformational Capabilities" account that provides money to "identify game-changing transformational Science and Technology investment opportunities through the WARfighter-TECHnologist (WARTECH) process," which "brings together technologists and DAF [Department of the Air Force] requirement officials to assess the best intersection of technology readiness and DAF future force design priorities."

In the 2022 Fiscal Year budget request, TRANSCOM, with its strategic airlift mission, is one of two commands the Air Force has identified as being potentially able to make use of the Rocket Cargo capability. The other is Air Force Special Operations Command (AFSOC), where it could allow special operations forces "to perform current Rapid-Response Missions at lower cost, and meet a one-hour response requirement," according to the budget request.

The Air Force says that to "utilize modeling, simulation, and analysis to conduct operational analysis of Rocket Cargo concepts, trajectories, and design considerations and verify military utility, performance, and operational cost" is part of its plans for the program in the 2021 Fiscal Year, which ends on September 30. The service also intends to "gather operational data from on-going commercial large-scale, instrumented, reusable launch events."

The service's plans for the 2022 Fiscal Year are significantly more ambitious and include finishing "initial AFRL [Air Force Research Laboratory] wind tunnel testing to assess novel trajectories needed for air-drop capability, and high-speed separation physics" and completing "industry outreach for loadmaster concepts including novel container designs, load/unload concepts, and testing the compatibility of AF cargo with rocket launch and space environments." Beyond that, the Air Force actually wants to "test and demonstrate an initial one-way transport capability to an austere site" and "perform an early end-to-end test to fully identify the technical challenges."

From what we've seen already, the Air Force has been looking at one concept of operation for Rocket Cargo that involves sending reusable rocket-boosted vehicles, such as SpaceX's Starship, via space or at least extremely high altitudes within the atmosphere, to forward locations. They would then land at those sites, be unloaded and/or reloaded, and then sent back to their initial departure point. The 2022 budget request mentions an "air-drop capability," which indicates that the service is also interested in the potential for a vehicle flying in space, or at least close to it, to release payloads over a designated drop zone. In addition to prior public discussions of the Rocket Cargo concept, there has also been talk about the possibility of prepositioning cargo in space for rapid deployment in a crisis or other contingency.

The immediate benefits, at least in general principle, of having any combination of these capabilities are obvious. The ability to very quickly deploy forces and other equipment and supplies to respond to rapidly developing situations on the ground could be valuable in a wide array of scenarios, ranging from high-end conflicts to humanitarian missions.

At the same time, the potential pitfalls of the concept, which has been explored to varying degrees since the beginning of the Space Race in the 1950s, are equally clear. There are many unresolved questions about the basic operational practicality of employing something like a reusable spacecraft to send cargo, let alone personnel, to forward locations, not to mention trying to then get those vehicles ready for a return trip in any sort of austere environment. On top of that, it's not clear how survivable this general concept of operation might be given the potential difficulties that could be involved in concealing these kinds of launches and shielding the noisy craft from enemy attacks during the landing procedure. A launch from a forward site would have to involve a rocket booster full of fuel, which could only make it a very attractive target, as well.

The Air Force does say that "rapid launch capabilities from unusual sites, characterization of potential landing surfaces and approaches to rapidly improve those surfaces, [and] adversary detectability" are among the things that the Rocket Cargo program will explore. How the service might seek to solve any of those problems remains to be seen.

Beyond these operational considerations are underlying cost questions, as well. At the time of writing, SpaceX says on its website that a launch involving its reusable Falcon 9 rocket costs around $62 million, while one using its larger Falcon Heavy is approximately $90 million. These prices are, of course, dependent on various factors, including the need to get objects into orbit rather than move them along a suborbital route, and are based on payload weights significantly larger than the Air Force's stated 100-ton goal for Rocket Cargo. Last year, SpaceX said that the average Falcon 9 launch cost was closer to $28 million. The company's CEO, Elon Musk, has also said he hopes the cost of future Starship launches will be as low as $2 million.

Regardless, none of these figures are lower than the cost to send a C-17 to virtually anywhere in the world. The War Zone has previously estimated that it would cost around $540,000 to get the job done with one of these planes. This is just over a quarter of Elon Musk's cost goal for Starship launches and exponentially lower than the price of an average Falcon 9 launch, according to SpaceX's figures. Globemaster IIIs also have a well-established capability to land in very austere locations, refuel, and depart.

Speed is, of course, the central difference, with this notional C-17 flight taking around 18 hours. At the same time, unless the underlying operational and other practical issues surrounding the Rocket Cargo concept can be resolved, the benefits of being able to reach any locations in an hour or less may not be something the Air Force can exploit to its full potential. There are certainly possibly niche missions, such as the rapid reinforcement of facilities overseas, a U.S. Embassy under attack, for instance, a scenario where the dramatic landing of a spacecraft-like vehicle might actually be beneficial from a psychological warfare perspective, where this could still be valuable capability. However, it's not clear if this would justify the cost to develop and field this capability to any significant degree.

As already noted, this is hardly the first time that the U.S. military has explored this concept without being able to turn it into a practical capability. One of the most recent efforts, known as Small Unit Space Transport and Insertion (SUSTAIN), which the Pentagon's National Security Space Office and U.S. Marine Corps worked on in the 2000s, was stated to be "doable" by the end of the next decade. This clearly turned out not to be the case.

The hope is definitely now that reusable space launch technologies, such as those pioneered by SpaceX and that are also being developed by other companies, are game-changing enough to help Rocket Cargo succeed where previous programs have failed. The Air Force is certainly eager to demonstrate the feasibility of the concept now and it will be very interesting to see how any such real-world testing in the next year or so goes.