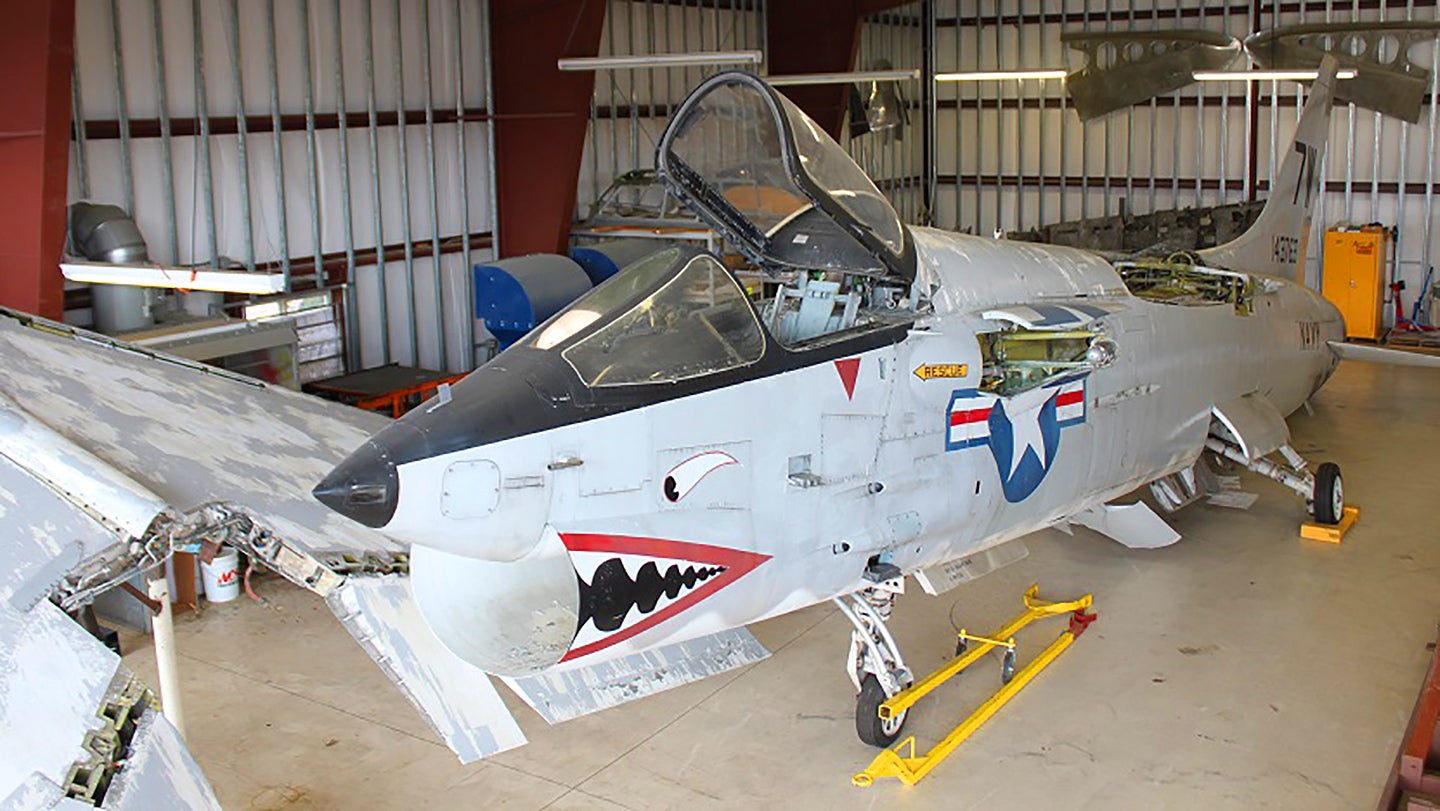 The aviation legacy of the late Paul Allen, the co-founder of Microsoft, entrepreneur, philanthropist, and vintage aircraft enthusiast, continues to offer up more potential treasures for those with deep pockets. While the world-record breaking Roc satellite-launcher aircraft and Allen’s personal MiG-29 Fulcrum fighter jet have since found new owners, now a small squadron’s worth of warbirds are up for sale, too.

The one caveat is that the aircraft up for grabs are all in serious need of work if any of them are to be restored to airworthiness, but that’s by no means impossible for at least some of them. The planes in question are all former restoration projects acquired by Allen as part of his extensive historic aircraft operations, which included the Flying Heritage & Combat Armor Museum at Paine Field in Everett, Washington.

What set that fabulous collection apart was the painstaking efforts that went into restoring its aircraft, with no effort spared to maximize their authenticity and replicate their original appearance where possible. But not all of its projects were completed, which brings us to the aircraft now available via two different warbird brokers, Platinum Fighter Sales and Courtesy Aircraft Sales.

So, say you have some space in your hangar, and time and money enough to plow into a project of this kind, here’s what’s on offer:

Probably the jewel in the crown among the planes for sale is this 1942 example of the legendary World War II heavy bomber. One of only a few surviving Seattle-built examples, the bomber, N12355, is partially dismantled but in very good condition — reportedly a full 80 percent of the structure is fully restored, with just the nose and cockpit needing substantial work.

Originally handed over to the U.S. Army Air Forces in May 1942, the bomber soon ended up with Honeywell, who used it to test an autopilot system, the C-1, which could be combined with the revolutionary Norden bombsight for accurate high-level bombing. Honeywell used the bomber to test a range of other systems as well, including an electronic turbo-supercharger control system and blind landing equipment, during 1,800 hours of wartime test flying.

In the immediate post-war years, the aircraft passed through the hands of various civilian owners, spending time as an instructional airframe at the University of Minnesota, which acquired it for all of $350.

In 1952 the Flying Fortress went onto the U.S. civil register and it then spent a period based in Canada where it was used for aerial survey, a growth industry in the country at that time, including time spent flying out of Thule in Greenland.

In 1964 the aircraft changed owners again, now headed for Bolivia, where it operated as a cargo transport, including carrying refrigerated meat. The B-17 went into storage in Bolivia in 1980 and remained there until bought by World Jet, Inc. of Fort Lauderdale, Florida, to where it was flown in 1990. Paul Allen bought the aircraft in 1998 and had it flown to Seattle where it resides today.

The vendor claims this has the potential to be the “the finest B-17 restoration in the world,” and, judging by the available photos, that looks entirely possible. It would be a welcome addition to the small number of B-17s that can be seen flying today.

Rarer still than a B-17 is this 1943 example of the Imperial Japanese Navy’s iconic World War II fighter, the Mitsubishi Zero. Described as a “time capsule,” this remarkable fighter, construction number 1303, has the potential to be rebuilt to an airworthy condition but is just as valuable in historical terms as it is now, despite decades of wear and tear, together with its original Sakae 21 radial engine.

The Model 52 version of the Zero was introduced in 1943 in an attempt to address the appearance of advanced new Allied fighters that had by now seriously eroded its combat prowess. Diving speed, for example, was increased through a number of changes including a reduced wingspan.

This example was built by Nakajima under subcontract in March 1944 and served in the Mariana Islands, probably doing battle with U.S. Navy aircraft during the carrier air raids on Peleliu. It was finally captured by U.S. forces on Saipan the following July and then brought back to the United States by aircraft carrier for technical evaluation. Both American and British pilots flew the Zero and it was also demonstrated together with a B5N Kate torpedo bomber as part of the ‘Victory Squadron,’ to encourage people to buy war bonds. After a ground looping accident in October 1945, the Zero was abandoned for scrap at Naval Air Station Atlanta, Georgia. Fortunately, it was retrieved for display at the privately owned Atlanta Museum. After many years left out in the open, the fighter was acquired by Paul Allen in 2000.

This asking price looks like a relative bargain for an example of the U.S. Navy’s classic carrier-based single-seat jet fighter of the early 1950s. First accepted by the Navy in May 1951, this Panther, Bureau Number 127147, is also a veteran of the Korean War, sailing to the war zone in September that year aboard the carrier USS Antietam. By October, the fighter was operating as part of Carrier Task Force 77 off Korea’s east coast, assigned to VF-837. The jet flew multiple combat missions, mainly in the interdiction and armed reconnaissance roles, and it took damage from ground fire on two occasions. The Panther was then turned over to the U.S. Marine Corps in Japan before returning to Korea for mainly close air support missions, this time flown from the airbase at Pohang, assigned to VMF-115 and then to VMF-311.

After 756 hours of combat the Panther returned to the United States and to a training unit at Naval Air Station Kingsville, Texas. The fighter was then transferred to the Argentine Navy, with which it served from around 1959 until 1971. This was the only Argentine Panther to return to the United States, when it was sold to a private owner in Texas in 1995. It’s unclear when the Panther ended up in Paul Allen’s care, but it seems it has received little in the way of restoration work since.

While the Republic Thunderjet may be well known for its U.S. Air Force service and its role as a fighter-bomber in the Korean War, less well known is the fact it also served in communist hands during the Cold War. This F-84G, U.S. serial number 51-11126, originally flew with the Air Force’s 54th Fighter Interceptor Squadron at Rapid City Air Force Base, South Dakota, from December 1952, as part of Air Defense Command. Once the unit began replacing its Thunderjets with F-86 Sabres, the aircraft went to Strategic Air Command’s 407th Strategic Fighter Wing at Great Falls Air Force Base in Montana February 1954. Later that year it was handed over to Air Materiel Command at Hill Air Force Base in Utah and was then prepared for transfer to Yugoslavia under the Mutual Defense Assistance Program. Over 200 Thunderjets were delivered to Yugoslavia in this way, after that country’s broke off close relations with Stalin’s Soviet Union.

Thunderjets served with the Yugoslav Air Force from 1953 until 1974, after which this aircraft was stored at the Museum of Aviation in Belgrade. It was one of two bought by a U.S. individual in 1990. It passed through the hands of several other private individuals before ending up at the Flying Heritage & Combat Armor Museum in around 2001. It’s currently stored with wings and tail removed, pending restoration.

One of three of these supersonic Cold War naval fighters on offer, this is the earliest, an F8U-1 model, delivered to Miramar, California, in November 1957 and first assigned to VF-143. Bureau Number 143769 also flew with the Marine Corps, under VMF-334 and VMF-323 at El Toro, California.

By 1960 its frontline career was put on hold, and it served with VU-7, a utility squadron, providing target towing.

After a period in storage, it was reworked in 1966 for service with another Marine squadron, VMF-511, at Willow Grove, Pennsylvania.

In 1968 it was loaded to Boeing and continued to be used by the manufacturer for support and test duties including variable camber wing research.

After Boeing’s use for it came to an end, the Pacific Northwest Aviation Historical Foundation attempted to acquire it, but this fell through and it eventually ended up with Paul Allen.

The improved F8U-1E added a limited all-weather capability to the Crusader and this example, Bureau Number 145527, was delivered to the Navy in April 1959. Early service was spent with VMF-232 at Kaneohe Bay, Hawaii, and then VMF-251 and VMF-312 at Atsugi, Japan. The latter squadron took the aircraft to sea aboard various aircraft carriers in the Asia-Pacific region.

In 1962, the Crusader returned with VMF-312 to El Toro, California, and after time with VMF-232 at Kaneohe Bay and VMFAW-122 at El Toro, it took on a training role, most likely with the Marine Corps Air Reserve.

By 1967, the Crusader had undergone an overhaul for service with VMFAW-212 at Kaneohe Bay and a year later it was at Iwakuni, Japan, with VMFAW-235.

The Crusader was then operated by a Navy squadron, VF-194 aboard the USS Oriskany before being upgraded to F-8L standard, including new wings that could carry more fuel and ordnance. Thereafter, the jet was used for training before being struck off charge in 1970.

Its history then becomes unclear, but by 1987 it was acquired by Thunderbird Aviation, Inc., which provided support for military and commercial aviation research, development, and testing efforts, although it’s not clear if the Crusader was ever flown under this company’s charge.

When Thunderbird went bankrupt, the Crusader was sold in 1997, passing on to a new owner in 2001, and then being sold to the Flying Heritage & Combat Armor Museum a year later.

Last of the three Crusaders is this F8U-2, Bureau Number 145592, which was handed over to the Navy in July 1959 and first assigned to VF-103 at Oceana, Virginia. The jet then transferred to VX-3, an air development squadron, at the same base. After a spell with VMF-333 at Beaufort, South Carolina, it was back to VF-103 at Oceana and then a period in Europe, with VF-11 at Rota in Spain.

The 1960s saw the Crusader make carrier cruises aboard USS Forrestal and USS Independence, with VF-103 and VF-84, respectively and, in 1963, in the wake of the Cuban Missile Crisis, the jet was at Key West, Florida, on behalf of Southern Air Defense Command.

Next was a period with VU-4, a fleet utility squadron, training pilots at Oceana and Cecil Field, and with VU-10 at Roosevelt Roads, Puerto Rico, and Guantanamo Bay, Cuba.

In 1967, the Crusader transferred to VF-62 for deployment aboard USS Shangri-La in the Mediterranean before going back to VC-4 at Cecil Field.

Before the decade was out, the jet had been upgraded to F-8K standard, with new underwing pylons and updated cockpit.

Several more Navy and Marine Corps squadron postings followed, before a final transfer to long-term storage at Davis-Monthan, Arizona, in 1975.

This aircraft, too, was acquired by Thunderbird Aviation, Inc. and its flight trials work included cluster bomb tests for the Air Force. The jet also made several air show appearances in the late 1980s and into the 1990s before Thunderbird wound up its operations.

The aircraft was also acquired by Paul Allen in 2002 and, superficially at least, appears to be the best preserved of the three Crusaders.

No doubt, whoever buys any of these aircraft will be embarking on a seriously ambitious project and one that will likely require a budget to match. However, if one or more of them does end up being restored to its original glory, or even taking to the air, it would be a more fitting tribute to Paul Allen, whose enthusiasm brought so much to the historical military aviation scene.

Hat-tip to Warbird Digest for alerting us to this story.