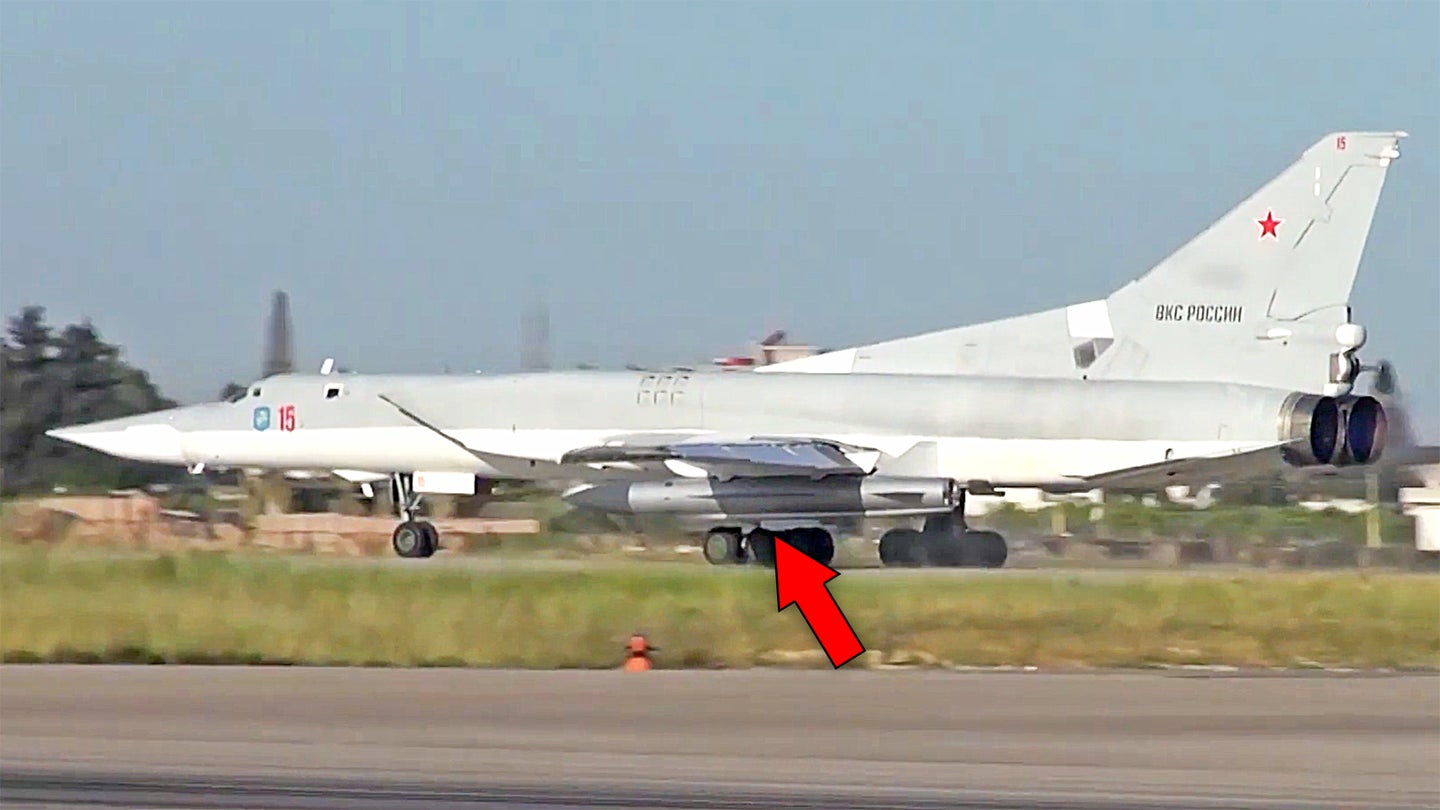 The Russian Ministry of Defense has released new video and photos showing the current deployment of three Tu-22M3 Backfire-C swing-wing bombers to Khmeimim airbase in Syria, the story of which we were first to report on Monday and followed up on a day later with additional details. Now, as we expected, one of the jets has appeared toting a single example of the enormous Kh-22 series standoff missile. Known in the West as the AS-4 Kitchen, the weapon is now primarily used for anti-shipping strike, in keeping with the maritime mission that Moscow has said the Backfires will undertake while in Syria.

A video published today by the Russian Ministry of Defense’s official television station, TV Zvezda, shows crew strapping into one of the four-seat bombers at Khmeimim, with an example of the A-50U Mainstayairborne early warning aircraft visible on the ramp in the background. An unarmed Russian Aerospace Forces Tu-22M3 is shown departing the airbase, while another is shown flying, with a single Kh-22 (or possibly a modernized Kh-32) carried asymmetrically, under the port wing. There is also an inflight sequence onboard one of the bombers, revealing the non-upgraded cockpit and one of the pilots studying a paper map. Additional footage published by the same source also shows Su-35S Flanker escort fighters departing to accompany the bombers.

The two bombers that can be identified while loaded with missiles are ‘Red 15,’ wearing the Russian registration RF-94149, and thought to be homebased at Shaykovka in western Russia, and ‘Red 50,’ RF-34091, from Belaya in the Russian Far East.

There is also a series of photos taken of the bombers at the Syrian base, showing a missile-armed aircraft landing, and again on the hardstand, as well as shots of ground crew wearing desert-colored summer flying suits. The caption to this series is “Crews of Tu-22M3 long-range bombers have begun to perform missions in the Mediterranean sea zone.”

Since this is the first deployment of Tu-22M3s — or any Russian long-range bomber —to the Syrian base, it wasn’t guaranteed that they would have brandished any weapons. So far, it’s not possible to confirm if more than two missiles are available to the three bombers at Khmeimim and it’s even possible that only these two rounds are on hand to provide for training — and media opportunities of this type.

Theoretically, each Tu-22M3 can carry as many as three of these 38-foot, liquid—fueled missiles, although a single example is a far more common payload. These missiles are best known as high-speed ship-killers, for which they can be armed with a nuclear of conventional warhead, but there is also a nuclear-only land-attack version that can be used to attack high-value stationary targets, such as airbases or ports.

Since the Backfire-C is the only aircraft in the Russian inventory that currently carries the Kh-22 or Kh-32, having examples of the missiles in Syria is significant, as there wouldn’t have been stockpiles of them at the base to begin with.

The appearance of the Backfire and anti-ship missile combination is also fully in line with the Russian Ministry of Defense’s description of the current deployment as fulfilling “the tasks of mastering the airspace in the maritime zone of the Mediterranean Sea.”

We have already examined how a Tu-22M3, armed with a single Kh-22, can range across the Eastern Mediterranean, over the Black Sea, and even the Red Sea, from Syria, presenting a serious threat to NATO shipping. In its anti-ship version, the Kh-22, while positively antiquated, would still provide the defensive systems operators of any surface warships with a serious headache. Launched at Mach 1.5, the missile accelerates to a cruising speed of Mach 3 after flying for around 14 miles. Then, when approaching the target, the missile dives at an angle of around 30 degrees, accelerating to a terminal speed of Mach 4.1. Maximum range of the anti-shipping Kh-22 is over 300 miles, while the improved Kh-32 is said to extend this to more than 500 miles.

Ahead of the Tu-22M3 deployment to Syria, Russia undertook extensive renovation work at the airfield, extending one of the two runways as well as resurfacing and adding new lighting and radio communications aids on both of them. At the time, The War Zone postulated that this was to accommodate bomber operations of the Mediterranean, to NATO’s chagrin. You can read more about that effort and its other potential implications for Russian airpower in this previous story.

So far, the inaugural Tu-22M3 deployment to Syria has played out much as we predicted. Now that it’s confirmed that the bomber will operate in a maritime role, and potentially carry anti-ship missiles, too, it will be fascinating to see where they venture next in the Mediterranean theater and what NATO's response to their presence will be.