British Carrier Joins U.S. Amphibious Forces In North Atlantic In A Vision Of What’s To Come

For the first time, the flagship of the Royal Navy is working with a full-size Amphibious Ready Group. 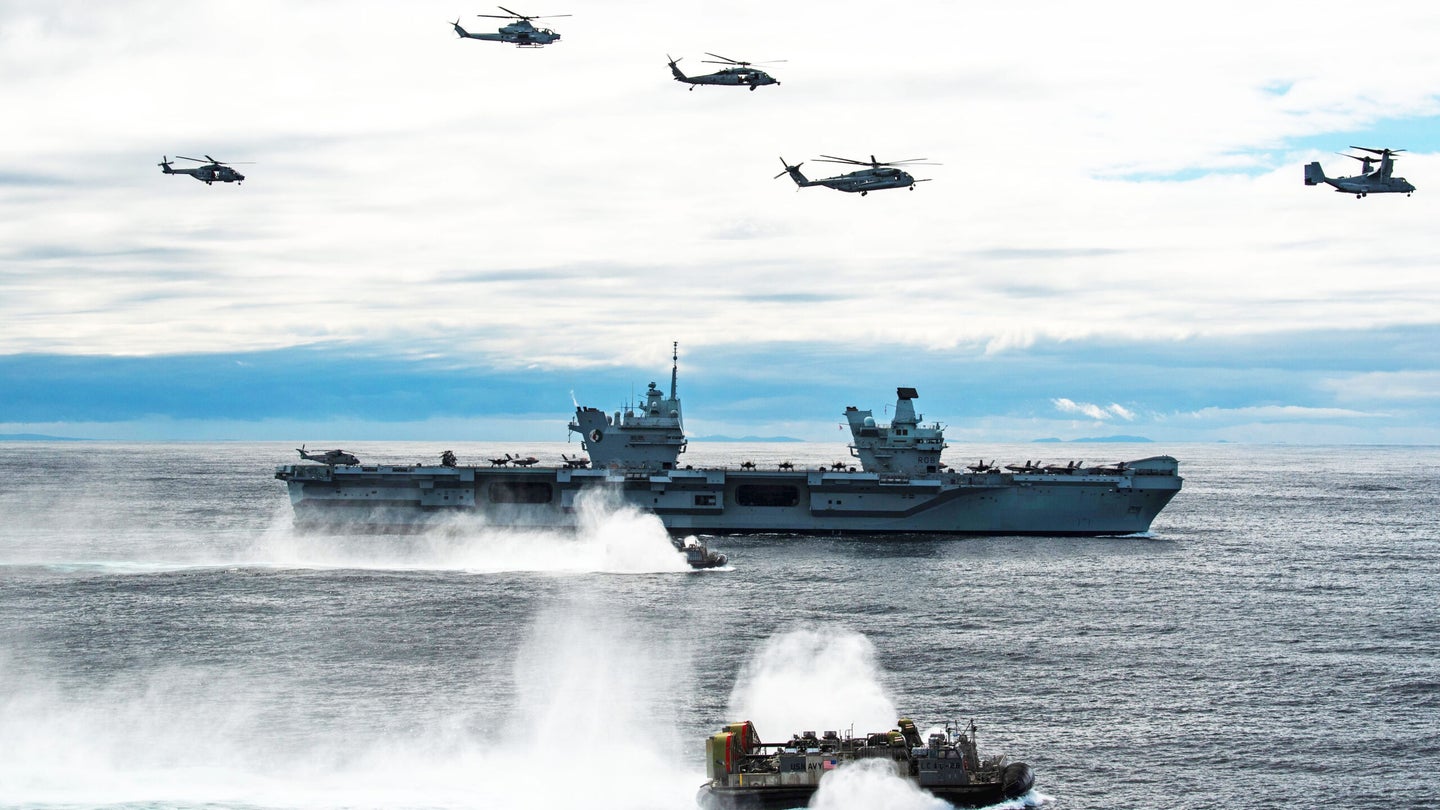 Some truly impressive photos have emerged documenting recent joint exercises in the North Atlantic involving the British Royal Navy and U.S. Navy, as well as forces from the U.S. Marine Corps. As seen in the image at the top of this story, warships, aircraft, and Landing Craft Air Cushions, or LCACs, deployed from the Iwo Jima Amphibious Ready Group, or IWOARG, teamed up with the Royal Navy’s flagship, the aircraft carrier HMS Queen Elizabeth, as well as vessels from other navies.

Also involved in these maritime drills, which were dubbed Exercise Ragnar Viking, were vessels from the French Navy and the Royal Norwegian Navy — an NH90 naval helicopter from one of those forces is also visible in the image above. The centerpieces of the maneuvers, however, were HMS Queen Elizabeth, which is working up for its first operational deployment within Carrier Strike Group 21 (CSG21), and the U.S. Navy’s Wasp class amphibious assault ship USS Iwo Jima. That amphibious assault ship is the flagship of the IWOARG, which also includes other elements of Amphibious Squadron 4, the Harpers Ferry class dock landing ship USS Carter Hall and the amphibious transport dock ship USS San Antonio, as well as the embarked 24th Marine Expeditionary Unit (MEU).

The involvement of both F-35Bs and AV-8Bs in the maneuvers is notable, with the former rapidly replacing the iconic jump jet on the decks of U.S. Navy amphibious assault ships. Manwhile, integration of Marine Corps F-35Bs aboard the HMS Queen Elizabeth is now well established and, as we have examined in the past, the American jets are likely to be a regular part of the air wings of the two British carriers for the foreseeable future. As well as boosting the British Joint Strike Fighter force, and lending valuable combat experience, the presence of Marine Corps F-35Bs on Royal Navy carrier decks should also mean that Marine Amphibious Ready Group working with them in the future could have a higher degree of interchangeability. There is also potential for British F-35s cross-decking — operating temporarily from the decks of U.S. Navy assault ships.

Furthermore, with the U.S. Navy and Marine Corps having been experimenting with employing Wasp class ships as ‘Lightning carriers,’ there is the potential for American and British flattops to work together to bring a more considerable number of F-35Bs to bear. The Queen Elizabeth class can potentially carry as many as 36 F-35Bs, although 24 Lightnings are described a “credible complement” for the Carrier Strike role. Meanwhile, the Marine Corps has said it wants to be able to deploy between 16-20 F-35Bs on each assault ship.

CSG21 came into these maneuvers as part of the Royal Navy’s own Exercise Strike Warrior in the North Atlantic, a separate effort involving 15 ships from four NATO countries. The two-week Exercise Strike Warrior, running from May 8-20, is bringing together more than 20 warships, three submarines, and 84 aircraft from 11 nations and is intended as a final test for CSG21 before it heads off on its first operational deployment to the Mediterranean, the Indian Ocean, and the Asia-Pacific region.

By introducing Ragnar Viking to Exercise Strike Warrior, the aim was to prove that NATO forces can run both Carrier Strike Group and Amphibious Ready Group/Marine Expeditionary Unit activities simultaneously.

“HMS Queen Elizabeth and the USS Iwo Jima represent a substantial concentration of maritime-based airpower,” said Royal Navy Captain Angus Essenhigh, commanding officer of HMS Queen Elizabeth. “With the involvement of warships from four NATO members, including HMS Albion, our rendezvous in the North Atlantic demonstrates the collective strength of the alliance.”

Without a doubt, Ragnar Viking provided valuable training opportunities for the participants, especially for HMS Queen Elizabeth and its supporting CSG21 vessels, and their aircraft, which have not been to sea together in such significant numbers.

“The fact that the Royal Navy is able to deploy a Littoral Response Group and a Carrier Strike Group simultaneously is also significant,” Captain Essenhigh added. “Very few other navies can do this, and it underscores the United Kingdom's substantial and enduring commitment to the security of Europe and the North Atlantic.”

That last point is of particular relevance at a time in which Russian Navy activities in the North Atlantic are on the increase, especially in regard to long-duration, deeply submerged operations by its increasingly sophisticated submarine force.

According to the U.S. Navy, Ragnar Viking was intended to showcase “high-end NATO cohesion, solidarity, and credibility in the Norwegian, North, and Baltic Seas.” Specific elements of the drills included a demonstration of long-range strike capabilities from the North Atlantic into Lithuania, amphibious landings in Norway, plus anti-submarine warfare and surface action group operations in the North Atlantic.

All those scenarios would seem to be clearly predicated on potential Russian military activity in the wider region, with the Baltic States (including Lithuania) and Norway, which shares a long border with Russia, identified as critical flashpoints of any future possible confrontation between Moscow and NATO. As such, the North Atlantic is also a critical springboard into the Arctic region, the strategic importance of which continues to grow. It is notable, too, that the submarine USS New Mexico, before it joined Ragnar Viking, had made a rare and high-profile port visit to Tromsø in northern Norway, an event described as a signal of deepening U.S. security cooperation with Norway in the Arctic region.

Finally, while the focus of CSG21 has been on the Carrier Strike role, the British carriers are also intended to operate in amphibious warfare scenarios as well, and also with scalable air groups that can cover both those missions, if required. An amphibious assault capability is especially important in the Baltic and North Atlantic, where the Royal Navy would be expected to operate alongside NATO allies, including U.S. Navy assault ships, as in Ragnar Viking, should Russia make a move, for example, on one of the Baltic states or Norway. Increasingly, too, the Arctic is being viewed as a potential theatre for amphibious operations, a fact that both the United States and Russia have noted.

Although the Royal Navy is expecting new warships as part of a modernization drive, it is still clear that most large-scale operations would likely require significant support from NATO, and from the U.S. Navy, and Marine Corps F-35Bs, in particular. With that in mind, Ragnar Viking is likely a pointer to how the British carriers will be expected to operate in the future, whether in wartime or peacetime sceanrios.

There will surely be more photo opportunities once CSG21 begins in earnest later this month — including potential first combat missions over the Middle East. In the meantime, these images provide a dramatic demonstration of NATO cooperation in the alliance’s traditional backyard.