Without U.S. technicians, the fall from grace of the Iraqi Air Force’s Viper fleet could be complete. 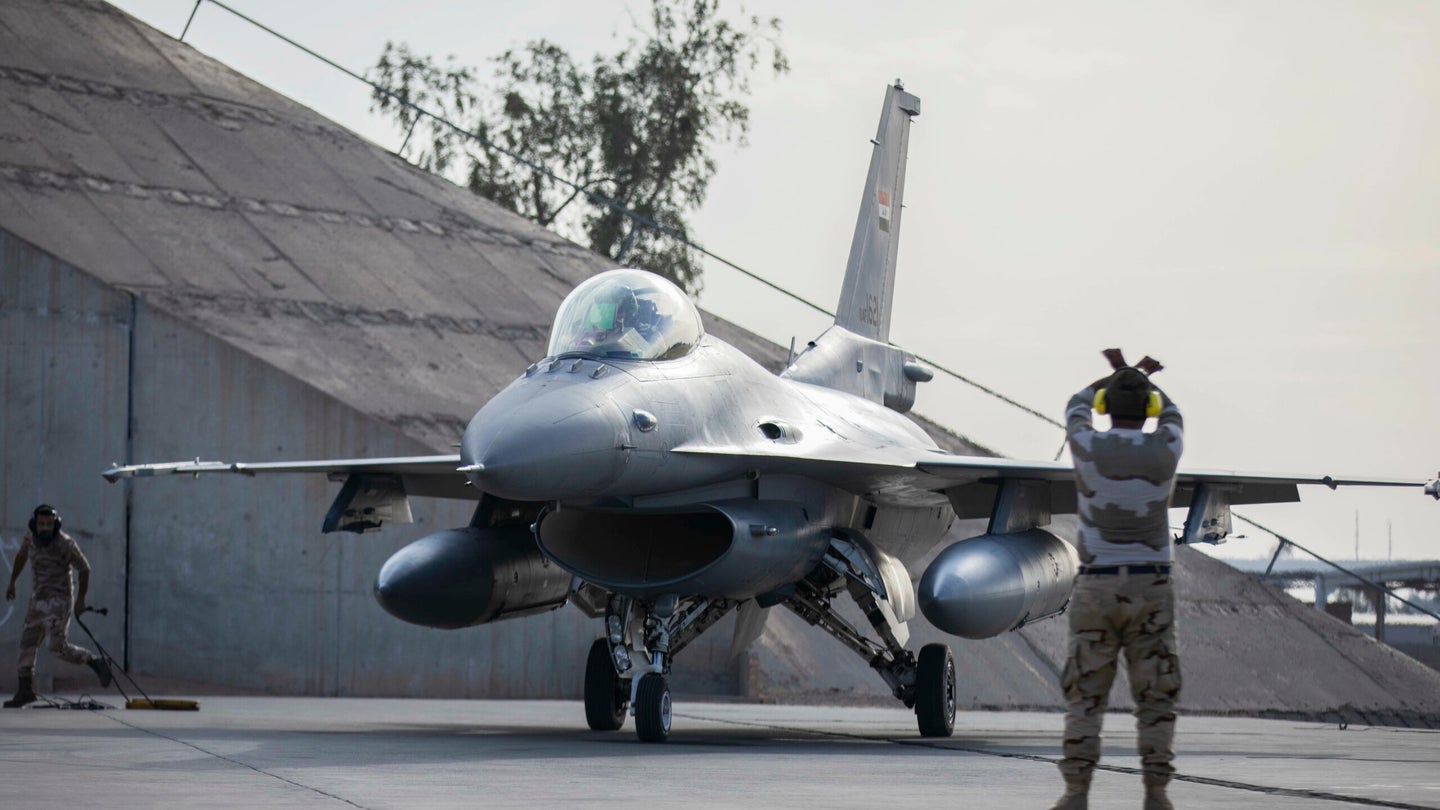 The saga of the Iraqi Air Force’s troubled Lockheed Martin F-16IQ Viper fighter jet fleet has taken another turn for the worse, with the announcement that manufacturer Lockheed Martin is to withdraw its maintenance teams supporting the jets from the country. The move has been taken amid continuing concerns for the safety of foreign contractors working on behalf of Iraq and the U.S.-led coalition in Iraq, where Iranian-backed militias are still waging a campaign of violence.

The New York Times reported the latest development and published a statement from Joseph LaMarca Jr., Lockheed Martin’s vice president for communications. “In coordination with the U.S. government and with employee safety as our top priority,” LaMarca explained, “Lockheed Martin is relocating our Iraq-based F-16 team.”

There were no details provided by the company about how many technicians will leave the country and whether or not there is any contingency plan to keep the F-16s active, although Reuters reports that a remote team will be set up to provide virtual support to the Iraqi Air Force. An unnamed Iraqi security official told the newspaper that there were 70 Lockheed Martin employees at Balad, around 50 of which would return to the United States, while the remainder would move to Erbil Air Base in the Kurdistan region.

The news follows soon after the release of the latest report to the U.S. Congress from the Lead Inspector General for Operation Inherent Resolve, covering the first quarter of 2021. This provides details of Iraqi F-16 operations, including a total of 299 sorties in this period, 295 of which were for training. The limited number of operational sorties used primarily GBU-12 guided bombs and occasionally Mk 82 unguided bombs. While Iraqi F-16s and attack helicopters were reported conducting “dynamic strikes against high-value targets while also responding to support [Iraqi Security Forces] units in combat,” no more than four combat sorties actually took place in the last quarter. “With continued U.S. contractor support,” the report noted, “Iraq’s F-16 program aims to reach eight training sorties per day.”

As The War Zone has explored in the past, these aircraft are, on paper, the Iraqi Air Force’s most capable combat assets, but have suffered from serious readiness problems in the past.

Earlier this year, the Iraqi Air Force succeeded in getting 23 F-16s airborne over Baghdad for a military parade to commemorate 100 years of the Iraqi Army. Previous accounts had suggested that less than 20 percent of Iraq’s remaining 34 F-16s were fully airworthy. The latest New York Times report states that “few” of these jets are now still operational.

Regardless, this same story concludes that, without Lockheed Martin’s assistance in Iraq, the remaining F-16s are likely to be grounded. Returning them to airworthiness would likely be difficult, if not impossible, without renewed assistance from the United States or potentially another country with established F-16 support infrastructure. Even if that could be arranged, it would also require U.S. approval. Either way, there remains the possibility that Baghdad instead chooses to invest its limited resources elsewhere in its military, perhaps in its Czech-made L-159 attack jets, currently flying but non-operational, or its AC-208 Armed Caravans that can deliver AGM-114 Hellfire missiles. However, the subsonic Su-25 Frogfoot attack jets have been grounded for the first quarter of 2021 due to a lack of spares.

The new report also points to the particular security concerns surrounding Balad Air Base, home of the Iraqi Air Force F-16 fleet, which is located around 40 miles north of Baghdad in the so-called Sunni Triangle, one of the areas that were overrun by ISIS when it made significant gains in 2014. Delivery of the jets to Iraq was delayed as Iraqi security forces took on ISIS, but after the aircraft arrived, they began to be used to fight the insurgents as part of the Operation Inherent Resolve coalition, striking targets both in Iraq and in Syria.

More recently, however, militias have stepped up their activities again in northern Iraq. As well as targeting local security forces, these attacks have been directed against individuals associated with oil fields and other energy infrastructure, humanitarian organizations, and U.S. interests.

Two other Iraqi airbases with a U.S. military presence came under ballistic missile attack from Iran’s Islamic Revolutionary Guard Corps (IRGC) last year. Al Asad and Erbil were both hit by IRGC missiles after the U.S. assassination of General Qasem Soleimani, then-commander of Iran's Quds Force, in a drone strike in Baghdad in January last year. In all, 110 U.S. service members were injured in those attacks and Lockheed Martin personnel were briefly withdrawn from Balad in response.

However, rocket attacks against Balad have continued, with Iran-backed militias also deemed to be the culprits. On May 3, a rocket attack hit the compound of U.S. military contractor, Sallyport, at Balad Air Base, killing and injuring some Iraqi contractors, although their U.S. counterparts were apparently unscathed.

The New York Times report indicates that Iraqi officials tried to persuade the U.S. contingent to stay at Balad, while simultaneously putting pressure on the militias to stop their attacks, but the United States rejected this. Now, according to Iraqi officials, a return of U.S. contractors is only possible if adequate protection can be insured. So far, at least, the Iraqi security forces have not proved able to achieve this.

The timing of all this is also unfortunate for Baghdad, where pro-Iran militias are applying pressure on the government to negotiate a withdrawal of U.S. forces from Iraq. While Lockheed Martin employees are not explicitly part of this equation, it's no secret pro-Iranian groups want them gone.

Meanwhile, the head of U.S. Central Command General Kenneth McKenzie told members of the House Armed Services Committee last month that he didn’t expect to see a complete withdrawal of U.S. troops from Iraq in the near future.

Iraq acquired its F-16IQ jets — equivalent to the F-16C/D Block 52 — under a 2011 Foreign Military Sales deal, but there have been repeated questions about their airworthiness and even their use in combat. As for their capability, it’s also worth noting that they fall below most equivalent Block 52 jets, being provided with less sophisticated armament to secure export approval.

A report published online last December by the Iraq Oil Report, which specializes in news from and about Iraq, stated that the Iraqi F-16 fleet was no longer flying missions as part of the international coalition. Soon after, the Combined Joint Task Force-Operation Inherent Resolve (CJTF-OIR) offered a statement confirming the Iraqi F16 pilots had “demonstrated their readiness in the Defeat Daesh mission,” using the colloquial name for ISIS.

However, the fact that the F-16s have been challenging to keep in the air has most recently been acknowledged by the Iraqi prime minister himself.

“The lack of experts to maintain aircraft according to the agreement signed with the American companies when buying them is a problem,” Prime Minister Mustafa al-Kadhimi told Iraqi television channels recently.

The temporary loss of Lockheed Martin technicians last year led to a downturn in F-16 availability, and this has been compounded by mismanagement and alleged corruption, including air force commanders allegedly fabricating logbooks to exaggerate the number of training flights taking place, and the reported illicit sale of jet fuel.

While the security situation in the country has been the most obvious cause of disruption, there is an argument to be made that the advanced F-16 was not the right choice for the Iraqi Air Force, or this type of counterinsurgency warfare, anyway. These are issues you can read more about in this previous article of ours.

Since the last U.S. combat troops withdrew from Iraq in 2011, the country has been on a slow and frequently painful path to military self-sufficiency. If Lockheed Martin can’t be persuaded to return to the country to support its F-16s or another arrangement doesn't come to pass, these jets may end up as little more than a footnote in the reestablishment of the Iraqi Armed Forces.