China Wants To Revive A Strategically Located Airfield Deep In The Pacific: Report

The airstrip in the country of Kiribati is positioned just 1,800 miles from Hawaii, which isn't that far in terms of the distances in the Pacific.

By Thomas Newdick and Joseph Trevithick May 6, 2021 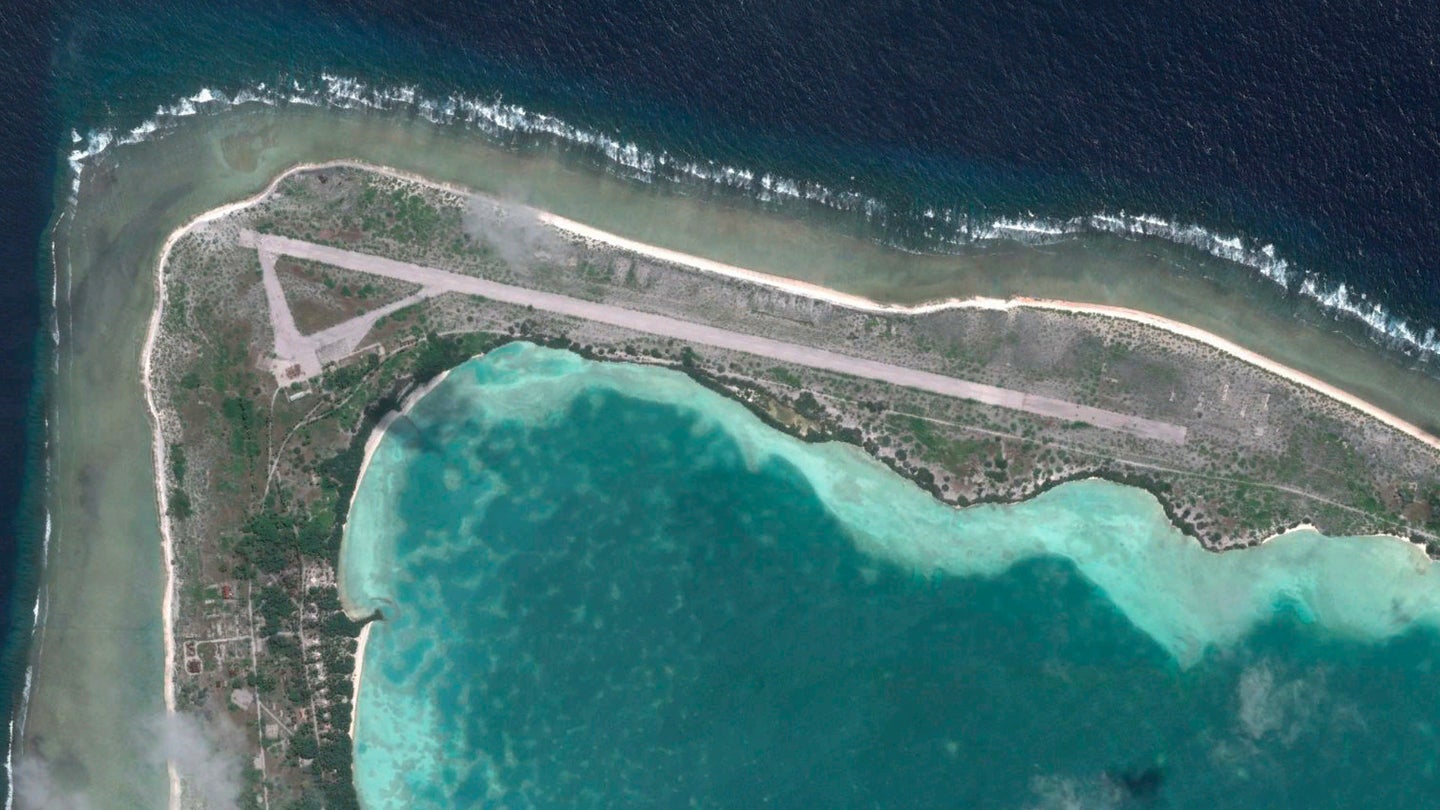 The Chinese government reportedly has plans to refurbish and expand an airstrip on the island of Kanton, also spelled Canton, part of the archipelago nation of Kiribati in the central Pacific Ocean. If true, this could give Beijing an airbase in an incredibly strategical location, between North America and New Zealand, potentially giving China's military much greater reach throughout a critical and increasingly tense region.

Reuters first reported on Chinese developments in Kiribati, which also included improvements to a bridge associated with the airstrip, on May 5, 2021, based on information from I-Kiribati politician Tessie Lambourne. The site currently has a single usable runway, officially measuring 6,230 feet in length, although the total unimproved length is closer to 8,000 feet, based on satellite imagery. The ribbon-shaped island, which has a total area of only around 15 square miles and a population of approximately 20, is part of Kiribati's wider Phoenix Islands group, none of the others of which are inhabited.

“The government hasn’t shared the cost and other details other than it’s a feasibility study for the rehabilitation of the runway and bridge,” Lambourne,  who formed the Boutokaan Kiribati Moa Party last year, which is in opposition to President Taneti Maamau's Tobwaan Kiribati Party, told Reuters. “The opposition will be seeking more information from [the] government in due course.”

At the time of writing, neither I-Kiribati nor Chinese authorities do not appear to have responded, in any way, to Reuters' report. Reuters also said it had reached to the U.S. Navy and U.S. State Department, but that neither had responded by the time its piece was published.

There has been talk about possible Chinese infrastructure projects in Kiribati since 2019, when the country, under President Maamau, who had been first elected three years earlier, recognized Beijing as the legitimate government of China and ended its diplomatic relations with Taiwan. This reversed a decision I-Kiribati officials had taken in 2003, when they changed their previous position, and recognized the government in Taipei.

During World War II, the coral atoll's airstrip was used by the U.S. Army Air Forces as part of an air ferry route between Hawaii and the South Pacific. After the war, civil operators also used it as a trans-Pacific stopover. The United States also made use of the island for space and missile tracking up until the late 1960s. Today, Canton Island Airport is used only for emergencies.

The existing runway at Canton Airport, once modernized, could be long enough to support fighter deployments, but the improved section would likely need to be extended out to the full 8,000 feet length to support large-size transports, as well as maritime patrol aircraft or even bombers. A considerable investment would also need to be made to supporting infrastructure to sustain any kind of meaningful, longer-term deployment by military aircraft, including hangars, fueling and maintenance facilities, and accommodations for aircrew and ground personnel.

The location of the airstrip would be especially useful for surveillance aircraft flights, including those by long-endurance unmanned aircraft, extending reach toward both Hawaii in one direction, and Australia and New Zealand in the other. Persistent intelligence-gathering, sea control, and long-range maritime targeting would all be of interest for the People’s Liberation Army in this region.

"The Australian Strategic Policy Institute (ASPI) said in a paper last year that Chinese facilities on Kiribati would be positioned across major sea lanes between North America, and Australia and New Zealand," according to Reuters. “The island would be a fixed aircraft carrier,” one anonymous individual, described as an adviser to Pacific governments, told that outlet.

With this in mind, it's worth pointing out that if China's developments at Canton Airport come to fruition and have an overt military component, they could also include other anti-access and area denial capabilities, such as surface-to-air missiles or shore-based anti-ship cruise missiles. Command and control and communications nodes might be another addition to any such military complex. This would all be similar to what has been seen on China's man-made outposts in the South China Sea, which also simply underscore the country's demonstrated ability to turn remote, uninhabited islands into important military facilities.

As well as providing a foothold in a strategic location, China’s plans for Kiribati could also impact its access to that nation’s extensive exclusive economic zone, which covers more than 1.35 million square miles and includes some of the most productive fishing grounds in the Pacific. The Chinese government also shut down a space tracking station on South Tarawa, another island in Kiribati, home to the country's capital and most of its infrastructure, when Beijing broke ties in 2003 over the country's recognition of Taiwan. That is another site that could be reestablished as Kiribati-Chinese ties continue to grow again.

Whether or not any Chinese improvements to Canton Airport, or associated infrastructure, ultimately have an overt military dimension does remain to be seen. Concerns about similar kinds of dual-use capabilities emerging from Chinese construction projects have emerged elsewhere around the world, including in the Caribbean region, another increasing focus of Chinese interest. There have been significant Chinese investments in port facilities and maritime infrastructure in multiple countries in this region, with underlying concerns from the United States, in particular, that they might also have a military application.

At the same time, some of the sites in question do not actually appear to have any direct military mission, at least in their current form. The War Zone explored the case of one such facility, a new airfield in Cambodia, last year. This facility appears to be ostensibly intended to serve a nearby luxury resort, despite the assertions from some experts and observers that some of the airstrip's features were ill-suited commercial aviation activities. That being said, it would not necessarily be difficult for Chinese authorities to retool such an airport for military use, even on a limited basis as an intermediate staging base, and do so in relatively short order.

It's also interesting that Lambourne, the opposition lawmaker, who was also notably Kiribati's last Ambassador to Taiwan, does not appear to have raised this possibility directly when she brought the information about the Canton Airport plans to Reuters. She instead added that she wanted to know specifically whether or not this planned work was part of China's controversial Belt-and-Road Initiative.

The Chinese government unveiled Belt-and-Road in 2013 as a massive global infrastructure improvement effort that would be mutually beneficial to China and international partners. Of course, since then, it has become apparent that this project is at least major a soft-power economic effort to increase Beijing's general influence abroad. There have also been accusations that it amounts to so-called "debt-trap diplomacy," in which Beijing offers loans for Belt-and-Road projects and then uses the debt as leverage to advance broader geopolitical interests.

Taiwanese officials have already accused Beijing of effectively bribing Kiribati to switch its diplomatic recognition in 2019 with promised sales of airliners and ferries. Ahead of President Maamau’s 2020 election victory, China provided over $4.2 million for “livelihood projects,” according to the I-Kiribati government.

Still, whatever the wider geopolitical relevance of the Chinese plans for Canton, and whether it will host any kind of military presence, it is another indicator of Beijing’s growing influence in the Pacific, which presents challenges to Beijing's competitors in the region, especially the United States. The U.S. relationship with Kiribati was formalized under a 1979 treaty of friendship, following Kiribati’s independence from the United Kingdom.

According to the U.S. Department of State, “The two countries work closely together on a broad range of issues, from strengthening regional security, to promoting education and climate resilience, to protecting fisheries and food and water security.” Kiribati law-enforcement agencies cooperate with the U.S. Navy and U.S. Coast Guard and those branches also provide air assets for search and rescue operations as well as fisheries protection operations in the country’s exclusive economic zone.

The U.S. military has used other airstrips in Kiribati to support various operations in the Pacific, including the transit of aircraft. After all, the airstrip is only around 1,860 miles southwest of Hawaii, with its extensive military installations belonging to the U.S. Air Force, Navy, and Marines.

Increasing Chinese influence on Kiribati could potentially threaten those relationships and any deployment of Chinese military personnel on a permanent or semi-permanent basis might also cause friction. The establishment of a Chinese military base in the East African country of Djibouti, the location of a major U.S. military hub in that region, has already provided some worrisome indications of how things could go. In 2018, the U.S. military accused Chinese personnel in Djibouti of injuring members of the crew of a U.S. C-130 Hercules transport plane by shining a laser at them.

So, whatever the wider geopolitical relevance of Beijing's plans for Canton Airport might, and whether it will host any kind of Chinese military presence in the future, it is certainly another example of China's efforts to expand its geopolitical reach.