The brief thaw in America’s relations with China in the 1980s yielded this surprising hybrid fighter program led by Grumman. 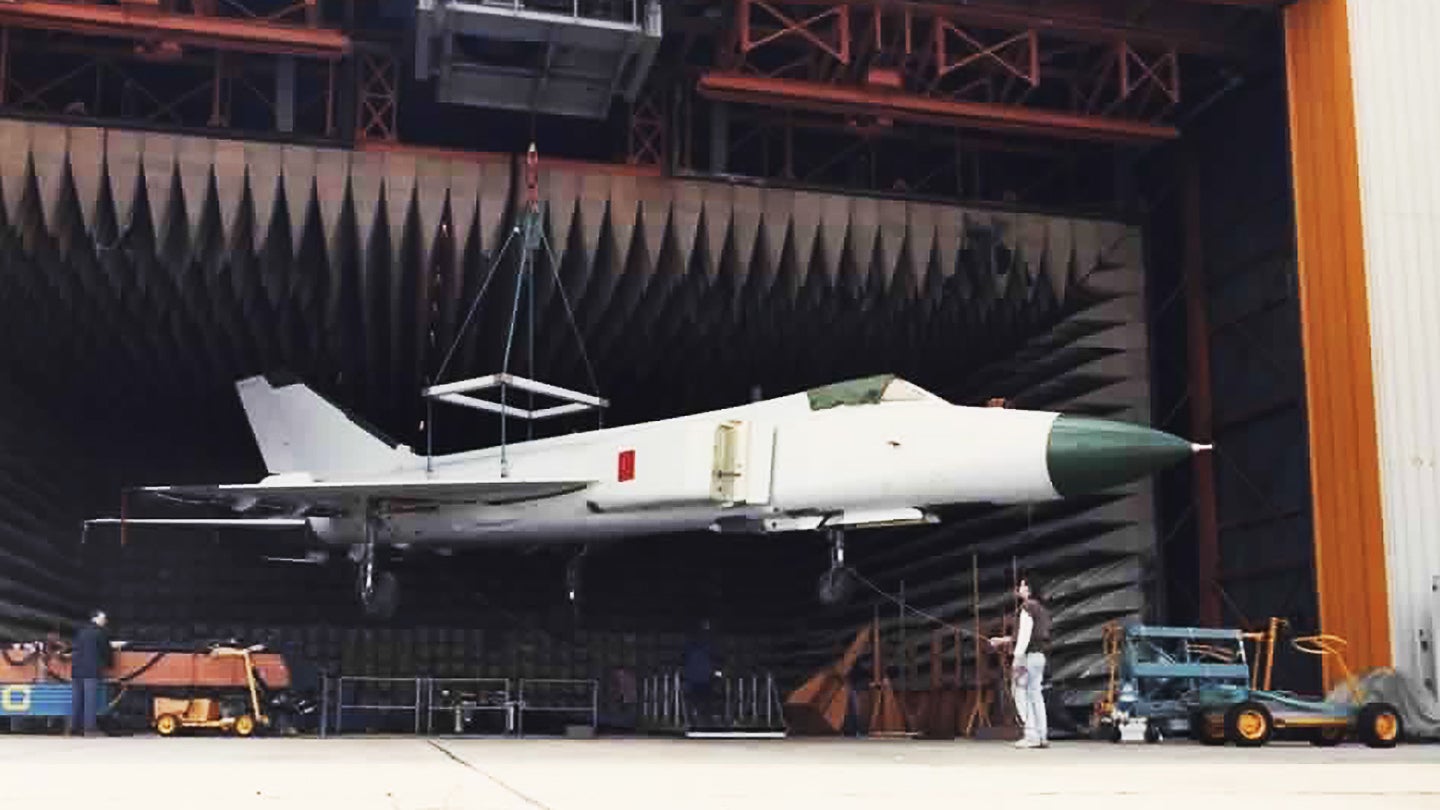 Today, with the Chinese People’s Liberation Army Air Force's ranks getting filled with indigenous J-10 multirole fighters, as well as increasing numbers of J-20 stealth fighters, the older Shenyang J-8 Finback fighter jet is increasingly a relic of a bygone era for the service. While the domestically-produced J-8 was built in multiple versions, the Chinese had already supplemented it with Russian-made Su-27 Flankers as soon as they could. However, for a time, the story of the mighty Finback looked set to be very different, thanks to the involvement of the U.S. defense giant Grumman.

The story of Grumman’s involvement in the Chinese J-8 fighter program dates back to the normalization of Sino-U.S. relations back in 1979. That year, the U.S. government recognized Beijing, and not Taipei, as the legitimate Chinese capital, and a new period of diplomatic and trade relationships was established. This new reality also impacted the global arms market and China began purchasing weapons from U.S. firms, with official State Department approval. It’s for this reason that, even today, the People’s Liberation Army still operates a number of Sikorsky S-70 Black Hawk utility helicopters, for example.

With Beijing now able to buy U.S. arms and benefit from its technological expertise, the People’s Liberation Army Air Force (PLAAF) had the chance to change the fortunes of its J-8 fighter. The jet’s development had been extremely protracted, consistently hampered by the effects of Mao’s Cultural Revolution.

The Shenyang J-8 had begun life back in the early 1960s as a project for a long-range, high-altitude interceptor. Conceptually it would be a scaled-up, twin-engine development of the J-7, which was the Chinese version of the prolific Soviet-designed MiG-21 Fishbed. Although design work began as early as 1964, and a prototype first flew in 1969, it wasn’t until the mid-1980s that the production-optimized J-8I was actually ready to be delivered to the People's Liberation Army Air Force (PLAAF). By then, the aircraft was seriously outdated and only 100 were completed.

Work on the second-generation J-8II, also known as the J-8B, began in 1980 and was a major redesign of the original aircraft. The J-8II featured side-mounted engine intakes instead of the MiG-21-style nose intake on the J-8I, allowing for a large radar to be fitted in the forward fuselage. There are suggestions that some of the design features were inspired by the Soviet-made MiG-23 Flogger, a handful of which were acquired by China from Egypt for evaluation, at least one of which might have ended up preserved on the former Soviet aircraft carrier Minsk.

The J-8II was first flown in June 1984 and, while offering an advantage over the fairly basic J-8I, it was still hampered by the limitations of available Chinese avionics, which lagged behind those found in Western and Soviet fighters. As such, the PLAAF was reluctant to place orders.

It was during J-8II flight testing that Beijing began to look to the United States for assistance in making its fighter a more modern proposition. A formal military assistance program, overseen by the U.S. Air Force and nicknamed Peace Pearl, was subsequently initiated. The Air Force has long used two-word nicknames starting with the first word “Peace” for foreign military assistance projects, typically involving the facilitation of the delivery of American-made aircraft.

In August 1987, the U.S. Air Force’s Aeronautical Systems Division placed a contract with Grumman to provide avionics upgrades for a number of J-8II fighters, between 50 and 55, depending on the source, worth a reported $502 million. The package was based around the same Westinghouse AN/APG-66 radar found on early F-16s. Also included were U.S.-made inertial navigation systems, head-up displays (HUD), multi-function cockpit displays, computers, and ejection seats. Accompanied by around 40 Chinese military officers, two of the jets were transported to the United States for tests in early 1989, where they were planned to be flown by U.S. pilots. At this time, the manufacture of the 50th jet was expected to be completed in 1995.

While the avionics were to be supplied by the United States, weapons were the responsibility of the Italian defense industry, in the form of the Alenia Aspide, a beyond-visual-range missile, based on the AIM-7E Sparrow, with semi-active radar homing. A batch of Aspide missiles was delivered to China in the mid-1980s, where the design was further developed for surface-launched and air-launched applications.

Prototype installations were planned for two J-8lls (presumably those that were shipped to the United States for trials), which were to have been delivered to Edwards Air Force Base, or perhaps nearby Mojave Air and Space Port, in California, sometime in 1989.

At least one photo, seen at the top of this page, shows one of the J-8IIs in an anechoic chamber in the United States. These chambers, which deaden ambient electromagnetic radiation, are routinely used when integrating new radars and other electronic equipment onto aircraft, ensuring that the various emissions don’t interact negatively with other onboard systems.

There are also reports of engine tests and ground tests at Grumman’s famous plant at Bethpage, New York, but no confirmed record exists of any test flights of the upgraded aircraft in the United States.

An export version of the Peace Pearl upgraded J-8II was also developed, as the Shenyang F-8II, which was put on display at the 1989 Paris Air Show. Compared to the version of the jet being built for the PLAAF, these would have differed in having non-American avionics and weapons. The example exhibited in Paris was loaded with inert Chinese ordnance, as well.

However, once tanks rolled into Tiananmen Square in June 1989, Chinese cooperation with companies in the United States, and in many other nations, came to an abrupt end, with arms embargoes and sanctions rapidly placed on China by the U.S. government and the European Union. The U.S. arms embargo was enacted into law, effectively prohibiting the sale of all military items — lethal and nonlethal — on the U.S. Munitions List to China. Official confirmation of the cancelation of the Peace Pearl program came in May 1990 and the two unfinished airframes in the United States were returned to China.

For successive, improved versions of the Finback during the mid-to-late 1990s, China instead turned to Russia and Israel for assistance in developing advanced avionics suites. Another key focus was on improved radars that could be used with more modern air-to-air missiles, adding a beyond-visual-range capability to the jets. The main missile in question was the indigenous PL-11, which used a seeker based on that of the aforementioned Aspide.

There are also rumors that the Type 1471 pulse-Doppler radar was based on the Israeli Elta EL/M-2034, while the PL-8 missile is clearly derived conceptually from the Israeli Python 3. There was also an export-optimized F-8IIM offered with the Russian Phazotron Zhuk radar and Russian armament.

The final and most advanced Finback fighter variant, the J-8F, took to the air in 2000, finally adding a modern glass cockpit with a HUD, as well as a new and more powerful radar. Once the production of fighter models had ceased, Shenyang continued to produce small numbers of specialist versions for suppression of enemy air defenses (SEAD) and tactical reconnaissance. Today, a handful of PLAAF units still fly late-model J-8s, as well as a single People’s Liberation Army Navy regiment.

Overall, however, the biggest winner of the collapse of Peace Pearl was the Soviet Union, and later Russia, which stepped in to become China’s top arms supplier. Chinese negotiations to purchase fighters from Moscow began in 1990, with Beijing selecting the Su-27 to become the PLAAF’s first truly modern fighter. China was the first export Flanker customer and secured a license-production deal, and has since produced a plethora of improved indigenous versions.

The impressive strides made by China’s aerospace industry in the years since mean the Peace Pearl program is now little remembered. But it’s fascinating to imagine what might have been, had the PLAAF received a technological kickstart of this kind from the United States back in the 1980s. Just the thought of a Shenyang-Grumman fighter is mind-boggling to comprehend today.