French authorities have confirmed that the test involved an M51 submarine-launched ballistic missile fired from a land-based facility.

France says it successfully conducted a test launch of an M51 submarine-launched ballistic missile earlier today from a land-based site on the country's northwestern Bay of Biscay coastline. Online flight tracking software also showed a U.S. Air Force RC-135S Cobra Ball aircraft, which is specifically configured to gather intelligence about ballistic missile tests, flying near where the weapon's inert payload was expected to impact the Atlantic Ocean north of Bermuda. Warning notices ahead of this test had indicated certain peculiarities, as The War Zone explored earlier this week, which had prompted discussion about whether this might have been a test of a new M51 variant or even a hypersonic weapon.

The French Ministry of Armed Forces issued a statement on the launch on April 28, 2021, stressing that the missile was not carrying any live nuclear warheads at the time and that the impact area in the North Atlantic was "several hundred kilometers from any coast." The statement confirmed that the test was carried out from the DGA Essais de Missiles, the country's central ballistic missile test facility. It is very possible that the weapon was fired from a submerged platform there, which simulates a launch from a submarine and that has been used in previous M51 tests. France conducted another M51 test across the Atlantic last year, but fired the weapon from the Triomphant class ballistic missile submarine Le Téméraire.

"This test was carried out ... in strict compliance with France's international commitments," according to a translation of the French-language statement. "This shot, carried out as part of the M51 program, once again demonstrates the excellence of high technology that French industries are implementing in this field."

The videos below show older M51 tests from the submerged pool at DGA Essais de Missiles.

French authorities did not say what version of the M51 was fired in this particular instance. They also did not offer an explanation as to why the impact area, as defined in navigation warnings for mariners issued last week, was significantly offset from the ballistic trajectory otherwise outlined in those notices.

The unusual position of the impact area, combined with the use of a land-based test site, rather than one of the French Navy's four Triomphant class ballistic missile submarines, had also led some to wonder whether a first flight test of France's V-Max hypersonic weapon demonstrator, which is, by most accounts, an unpowered boost-glide vehicle design, might have been imminent. A key attribute of boost-glide vehicles as compared to more traditional ballistic missiles is their ability to make significant and unpredictable maneuvers while traveling along an atmospheric flight trajectory, which could have accounted for the offset path in this case. Beyond the French government's confirmation that this was a test was in support of the M51 program, there are no other indications that the missile was carrying any such payload in this instance.

The variants of the M51 that France has in service now are a Multiple Independently-targetable Reentry Vehicle (MIRV) design that can carry up to 10 individual warheads on a single payload bus, also referred to as a post-boost vehicle. These are then released, pointed at different targets, during the weapon's terminal stage of flight.

Deploying the reentry vehicles at an oblique angle could indicate a test of a new capability of some kind. France is in the process of developing a new M51.3 variant, which will have a greater range than existing versions, along with other improvements. At the same time, publicly available information suggests that flight tests of that design could still be years away.

The curious flight path could also be the product of more mundane factors. "This could be due to how close to the U.S. East Coast and shipping lanes that a nominal trajectory would take or because there is a specific aspect of their reentry-vehicles maneuverability or post-boost vehicle that they are testing," Scott LaFoy, Program Manager for National Security & Intelligence at Exiger Federal Solutions and an expert on missiles, space, and nuclear weapons technology, had told The War Zone earlier this week.

Whatever the case, the test appears to have been interesting enough for the United States to want to observe it. As was also the case during the M51 test in the Atlantic last year, a U.S. Air Force RC-135S Cobra Ball was tracked flying near the impact area.

The Cobra Balls, including the RC-135S with the serial number 62-4128 that was spotted operating near Bermuda, have various sensor systems that allow them to collect imagery of ballistic missile launches, or warheads returning to earth, as well as associated telemetry data and electronic intelligence.

There are only three Cobra Balls in service today, making them a very low-density asset that the U.S. Air Force has to deploy judiciously to meet intelligence collection demands around the world. It is also known that RC-135Ss have been used to gather information about missile tests carried out by U.S. allies and partners, as well as potential adversaries, as part of a standing intelligence-gathering operation nicknamed Olympic Titan.

One of the French Navy's Dassault Falcon 50 business jets, which are configured for maritime surveillance and patrol, was also spotted flying off the coast of the U.S. state of North Carolina, some 600 miles to the west of Bermuda, today. While we don't know for sure if this aircraft was involved in this missile test, another one of these jets was also present during the 2020 M51 launch. This plane would be well-suited to keeping an eye out for any aircraft or ships deliberately intruding or accidentally straying into the impact area.

The French Navy's missile range instrumentation ship Monge, which is configured to gather telemetry and other data about missile tests, including ballistic missile launches, was also spotted leaving Norfolk, Virginia earlier this month. While its unclear where that vessel is right now, it was also involved in the M51 test in the Atlantic last year.

Back in France, a French Air Force E-3F Sentry Airborne Warning And Control System (AWACS) aircraft was spotted flying an orbit to the north of the DGA Essais de Missiles facility. It would not be surprising that the French military would want to ensure that no unwanted guest flew into the launch area during the test.

Only time will tell now whether or not any additional information emerges about the exact reasons for the offset impact area, as well as the use of a land-based test site in this instance versus a Triomphant class ballistic missile submarine. 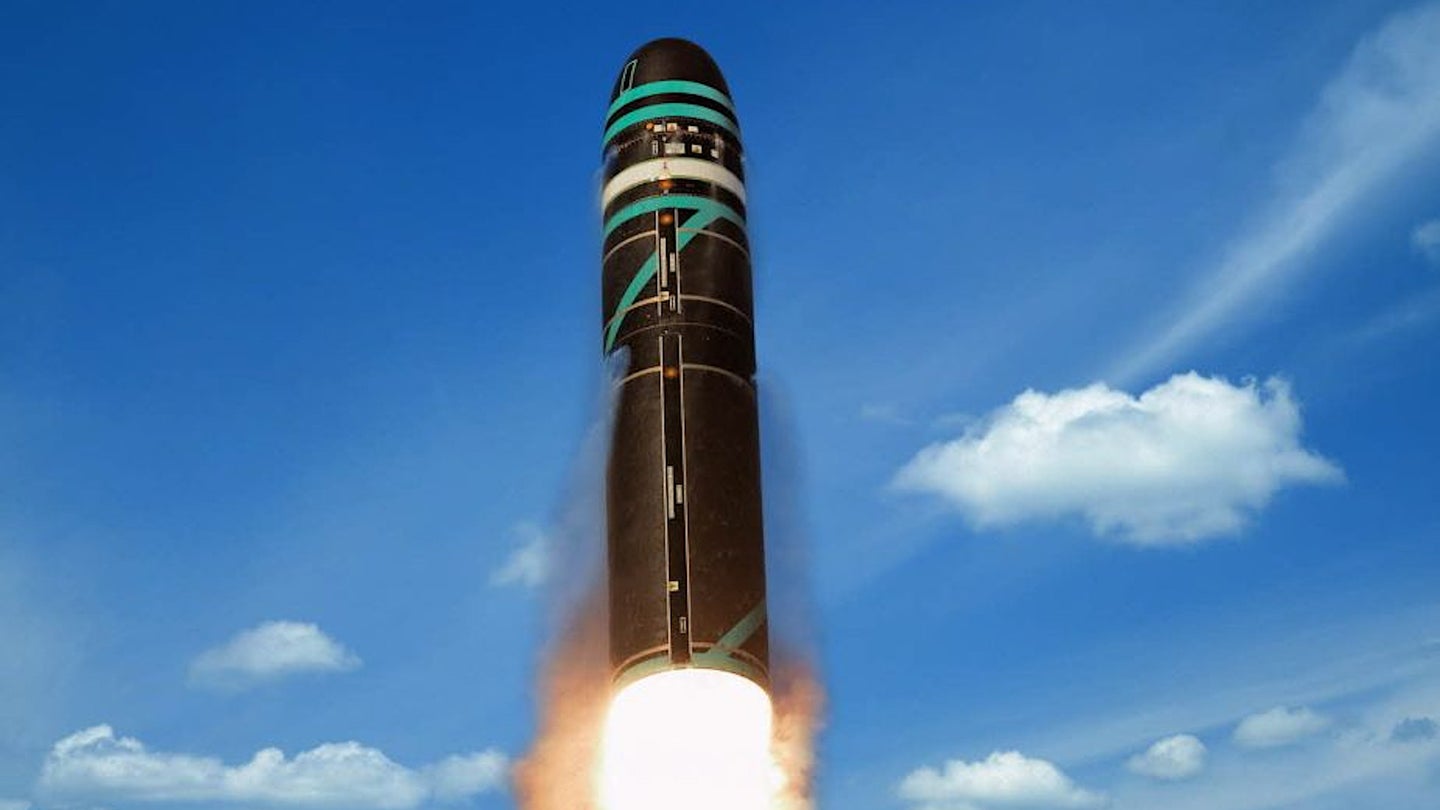 Warning notices have raised questions about whether France is about to test an improved submarine-launched ballistic missile or a hypersonic weapon. 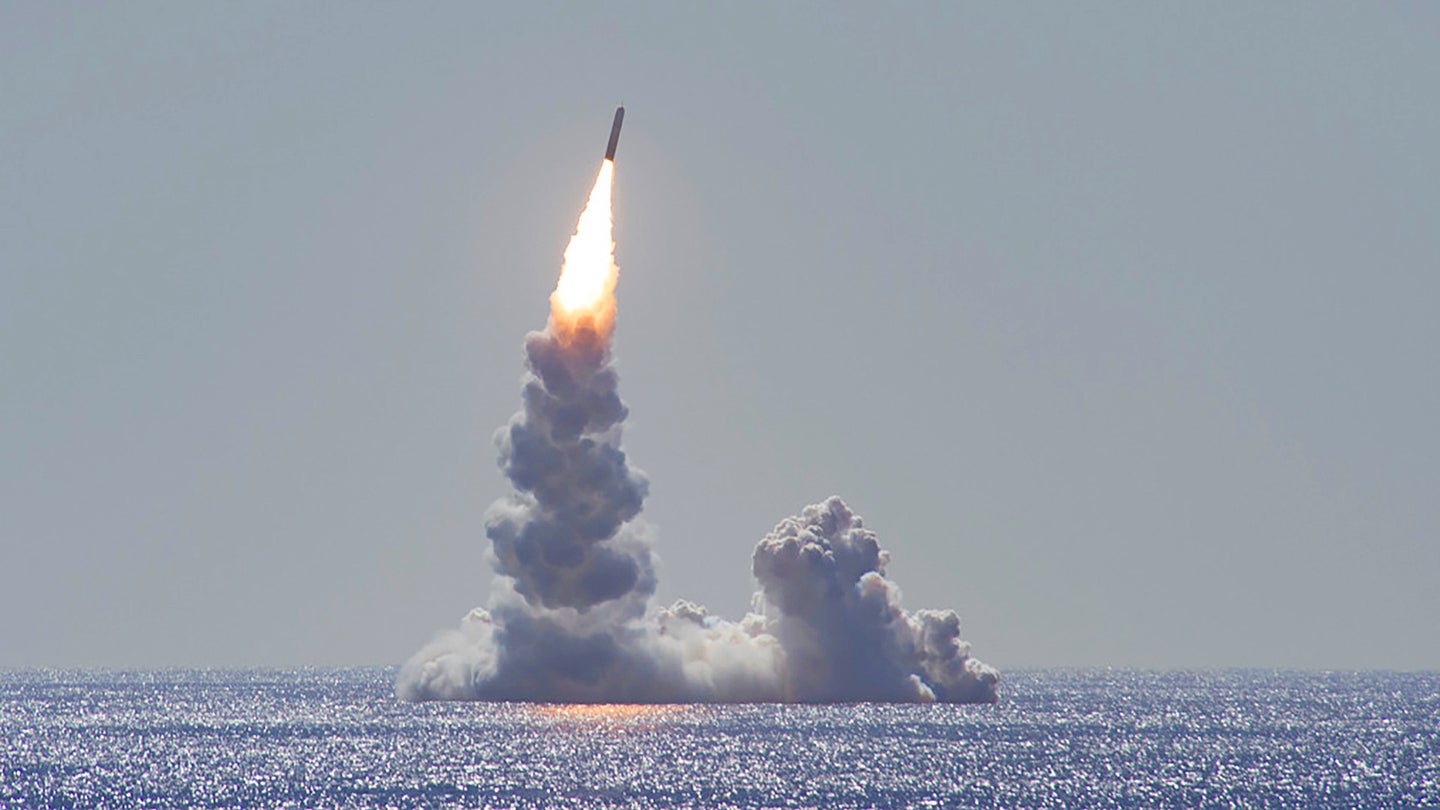 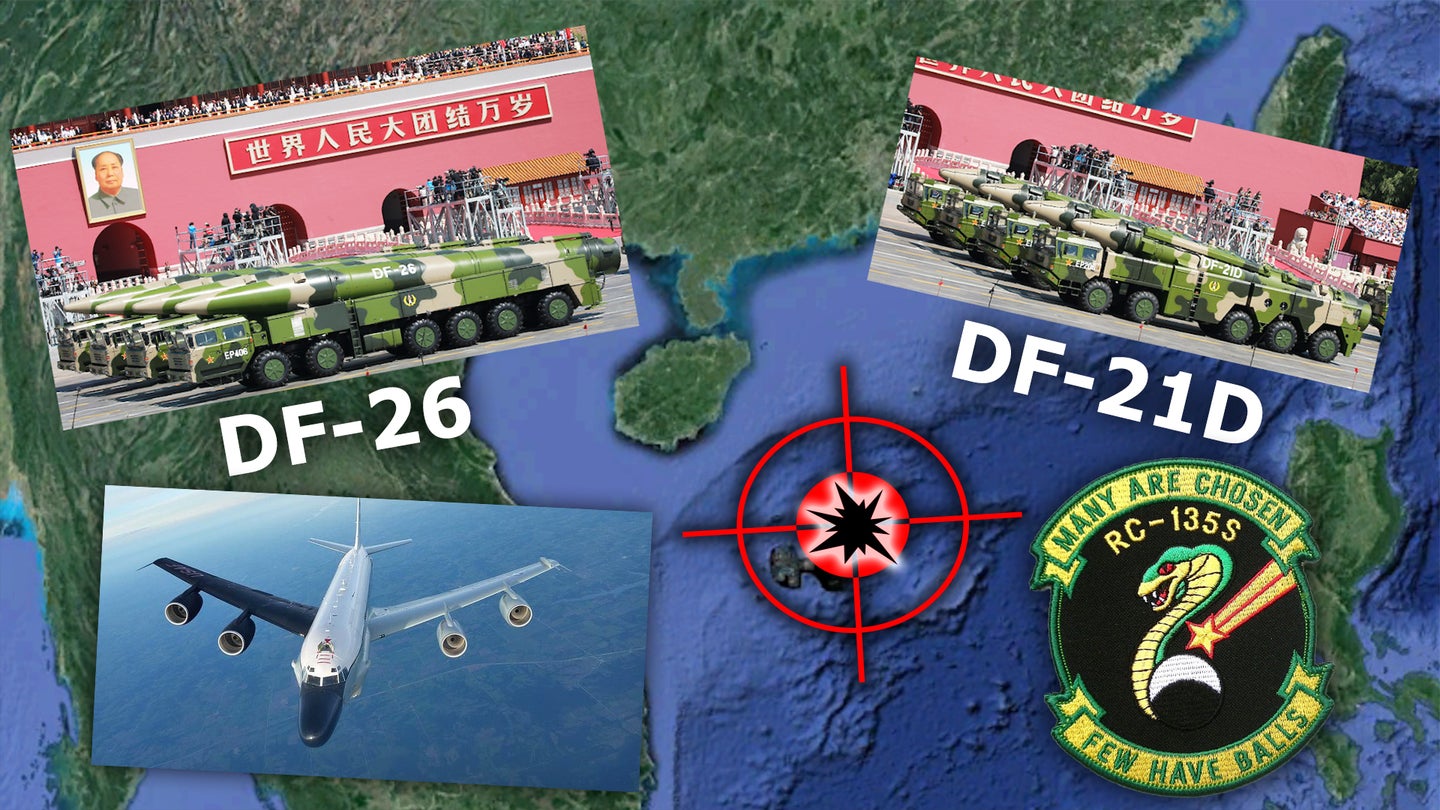