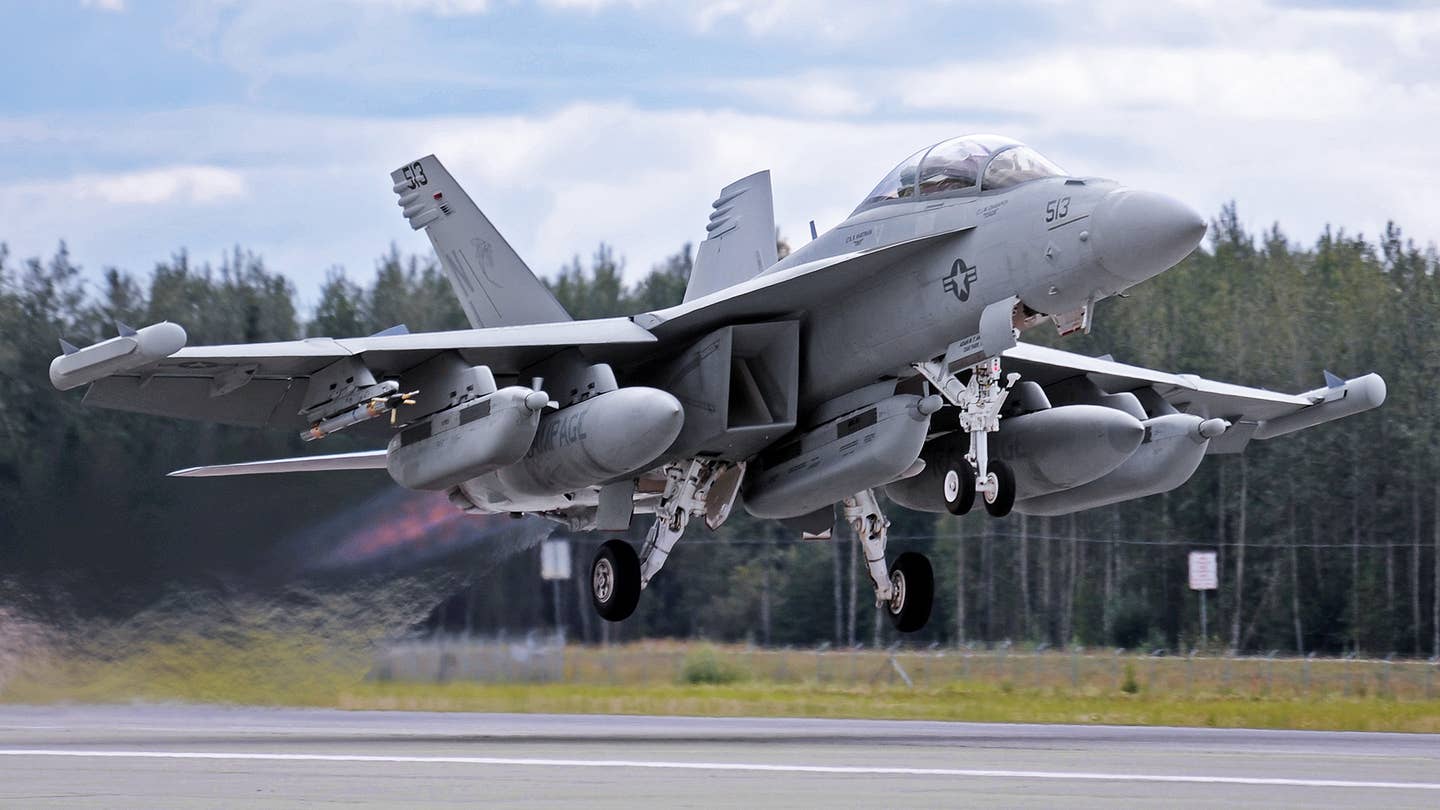 The Pentagon’s premier electronic attack and suppression of enemy air defenses platform has arrived in the Philippines. Four EA-18G Growlers and 120 personnel from VAQ-138, the Yellow Jackets, have been sent to Clark Air Base for bilateral training with the Philippines' newest fighter, the Korean-built FA-50 Golden Eagle. Yet this is just one facet of the Yellow Jacket’s strategic deployment.

According to the US Navy the quartet of Growlers will also be used to “support routine operations that enhance regional maritime domain awareness and assure access to the air and maritime domains in accordance to international law.” In other words, they are there to contest China’s blanket claims to the South China Sea and to challenge their increasingly armed man-made island outposts that dot the disputed body of water.

This detachment is part of a new initiative that is seeing US forces being drawn back to the same installations in the Philippines that they had vacated years ago. It is meant to increase interoperability between the US and local military forces, but above all else this inter-governmental agreement exists due to the mutually beneficial need to check Chin’s extra-territorial ambitions.

The first of these aerial deployments happened just a month and a half ago when five A-10C Warthogs and a trio of HH-60G Pave Hawk combat search and rescue helicopters deployed to the base. The deployment saw the A-10s flying “freedom of navigation” flights around China’s man-made islands.

The Growlers now being deployed to the area represent a very different and arguably much more pointed threat to China’s interests in the region than the A-10s did. These jets can jam and electronically attack China’s ship and island-based radar systems and communications nodes, drastically lowering Beijing’s situational awareness and overall tactical picture of what is happening in the region. As a result, this leaves their interests more vulnerable to surprise kinetic attacks.

Having this type of capability deployed to the Philippines will definitely be seen as an escalation by the Chinese. Overall it is also is a clear indicator that the Obama Administration is willing to deploy some of the Pentagon’s most effective combat aircraft back to the region in an attempt to counter China’s growing military presence nearby.

Meanwhile, the USS John C. Stennis had been tailed by Chinese ships from nearly the moment she entered the South China Sea according to the Navy Times, with Rear Admiral Marcus Hitchcock, the flag officer in charge of the Stennis Strike Group, stating:

“We did see PLAN ships quite routinely throughout the South China Sea. In fact, we were in constant visual contact with at least one PLAN ship at any one time, 24/7.”

The Stennis and her flotilla have since met up with Japanese and Indian naval vessels to execute a large-scale training exercise in the Philippine Sea, dubbed “Malabar 2016.” The location of the drills, and the fact that India and Japan, both who have territorial disputes with China, are joining the US in the exercise, is clearly news that China is unhappy to hear.

Check out the Stennis operating in some nasty weather during Malabar 2016:

A Chinese intelligence ship has continued to follow the Stennis during these drills, coming within just a handful of miles from the carrier. Its job is likely to soak up electronic and communications intelligence from the trio of ever-tight knit naval players.

This exercise comes as relations between Japan and China hit a new low last week after China sent a naval frigate into the contiguous zone around the disputed Senkaku Islands in the East China Sea.  This was the first time a PLAN surface combatant entered the area, although Chinese Coast Guard and other vessels have before.

China’s increasingly close watch on the US Navy also comes as the massive Rim of The Pacific (RIMPAC) naval wargames is about to kick off. The biannual multi-national exercise is the largest of its kind, and this iteration will include no less than 27 nations, including China.

Five Peoples Liberation Army Navy vessels are currently steaming toward Hawaii for the super-sized exercise. That is one more vessel than they sent in 2014. Well, that is if you don’t count China’s uninvited spy ship as an official participant.

China’s flotilla for RIMPAC 2016 consists of a destroyer, frigate, submarine rescue ship, hospital ship and a supply ship. This group will rendezvous with the American Arleigh Burke class destroyers Stockdale and William P. Lawrence on Saturday. Together they will make up one of four group sails that will head to Pearl Harbor where the drills are primarily based out of.

You may think it is strange that China is being invited to participate in RIMPAC even as tensions are broiling in the South China Sea. Not only that but also after China executed multiple unsafe intercepts on American aircraft, just weeks apart. Well you are not alone, but the fact is that there is a precedent for this type of thing and RIMPAC is used as much as a diplomatic tool as a military one.

As the Stennis Strike Group wraps up its Malabar 2016 exercise it will also head east to take part in RIMPAC. We will keep you updated as the exercise gets underway.