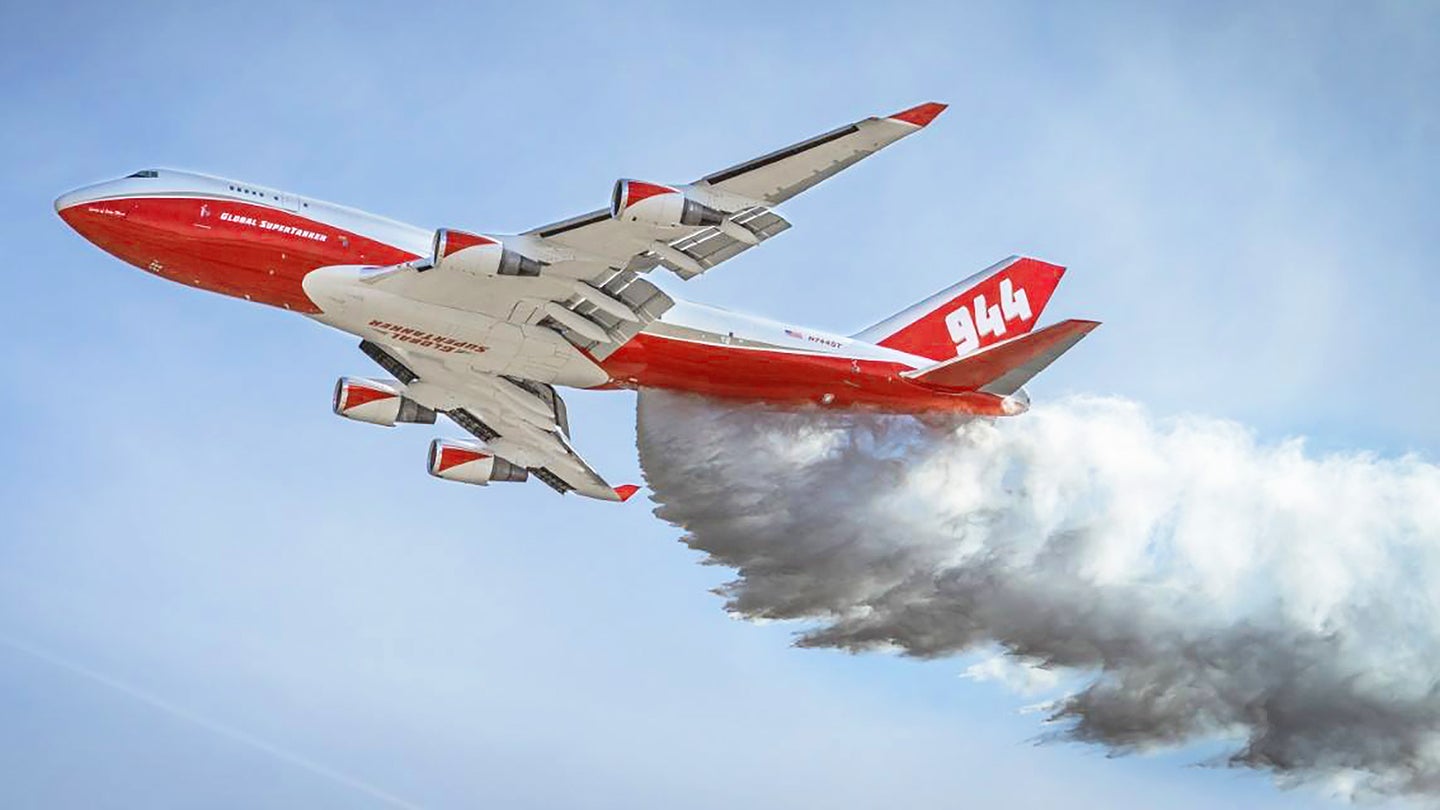 The awesome spectacle of a Jumbo Jet riding through valleys at low-level, before dumping over 17,000 gallons of bright red retardant over a blazing forest could be consigned to history as of now. The unique Boeing 747 Supertanker has been grounded, for the time being at least, after the investment group that owns the single aircraft decided to cease its operations.

The story was first reported earlier today by the authoritative Fire Aviation website. That site confirmed that the boss of the Colorado-based Global Supertanker, which is responsible for the day-to-day running of the aircraft, also known as Tanker 944, had contacted officials in different states, as well as within the federal government to tell them that operations had been wound up.

“This week the investors that own the Global SuperTanker just informed me that they have made the difficult decision to cease operations of the company, effective this week,” wrote Global Supertanker president Dan Reese, in an email dated April 21 that was obtained by Fire Aviation. “This is extremely disappointing as the aircraft has been configured and tuned with a new digital drop system and other upgrades to make it more safe and efficient.”

Reese confirmed in that same email that they are in talks with potential buyers interested in acquiring Tanker 944, a modified 747-400 series aircraft, also known as the Spirit of John Muir, and by its civil registration N744ST. However, there’s no guarantee that, if it should be sold, its new owner will continue to use it to fight fires far and wide. It could also be converted to a freighter configuration.

Meanwhile, the majority of the workforce at Global Supertanker, which is based in Colorado Springs, Colorado, has been put on furlough pending a decision on the future of the aircraft, which has reportedly not moved since January this year.

There are potentially some problems, too, for any operator that might be looking to operate Tanker 944 in its familiar role. Last April, the National Interagency Aviation Committee (NIAC), which provides national leadership in wildland fire aviation, determined that it would not provide another approval for Tanker 944 to use its retardant delivery system. This system is designed to allow the aircraft to drop its entire load in one continuous line, stretching over several miles, or in up to eight separate bursts, with the aircraft flying as low as 300 feet.

However, NIAC’s Interagency Air Tanker Subcommittee had demanded that certain changes be made to the system before it could be certified again for use. In particular, the subcommittee pointed to issues relating to coverage level, retention of retardant in the system following a drop, “trail off” of the retardant into areas outside the intended drop zone, and inconsistent flight profiles that affected retardant coverage.

These would all had to have been fixed before the end of 2020 before authorizing another approval.

“The U.S. officials who set the requirements in order for air tankers to be issued contracts, are very strict in enforcing those standards,” Fire Aviation’s Bill Gabbert told The War Zone. “One of the reasons they have refused to give the 747 a full certification is that after a retardant drop is completed, the liquid may trail off for a short time, releasing a small amount of additional retardant.”

However, it seems that at least some of these issues may have been addressed when the aircraft last went into scheduled maintenance, which took place last winter in Moses Lake, Washington. Among the changes made was a new digital controller for the retardant delivery system. According to Gabbert, that upgrade may have corrected the problem in meeting required coverage levels. Less clear is whether the retardant retention, trail off, or inconsistent flight profile issues have been fixed. It is noteworthy, however, that the aircraft still has valid Federal Aviation Administration (FAA) certification until 2024.

Regardless, anyone who does decide to buy Tanker 944 for firefighting will have themselves an aircraft of superlatives. “The 747 SuperTanker has by far the largest fire-retardant capacity of any firefighting air tanker,” Gabbert confirmed.

Even though its retardant capacity has been steadily trimmed down from the originally specified 20,000 gallons to the current 17,500 gallons, there is still no other air tanker that comes close. Typically, a decent-sized aircraft of this type might carry around a sixth of that load. Even the big DC-10 tanker, which you can see in action here, currently carries a little over half the 747’s load.

Tanker 944, which has been in service since 2009, is not the first Jumbo Jet air tanker, but it’s the most modern and had been the only one of its kind in operation prior to January. The first Supertanker conversion utilized a first-generation 747-100 airframe and was operated by Evergreen. When that company went bankrupt, Global Supertanker acquired the rights to the retardant system and adapted it for the 747-400. Acquiring the aircraft and converting it to an air tanker reportedly cost more than $10 million.

When it comes to tackling a major fire, a big air tanker like the 747 is sometimes what’s needed. As well as capacity, a 747-based tanker has the ability to self deploy over very long distances, and it can hit fires farther away, getting to the target more rapidly, than its competitors.

This has been testified during major conflagrations in the U.S., but also as far afield as Israel, where Tanker 944 was deployed in 2016 as part of a multinational coalition of firefighting aircraft. The aircraft has also been called into action in Bolivia, Chile, and Mexico, as well. You can read all about the aircraft’s exploits in the Bolivian portion of the Amazon in 2019 in this previous article.

The problem is, operating bespoke, modern tankers like the 747 or DC-10 is expensive, and firefighting budgets have not changed much since the days of tackling blazes in adapted World War II-era piston types. Operating the Supertanker can cost as much as $250,000 a day, according to some accounts. In the meantime, the requirement for aircraft of this type has only increased. In recent years, there has been a trend of wildfires breaking out in areas that were previously untouched by them, bringing new levels of destruction to areas of the American West, as well as parts of Australia and Russia’s Siberia region, among other locales, putting civilians, infrastructure, and military facilities at risk.

In the case of California, for instance, water is becoming rarer and forests drier, not just during the height of summer but also now during the spring and fall. Driven by climate change, more and more areas of the state are becoming potential tinderboxes, and these are increasingly not in the wilderness but close to human habitation.

“The Supertanker is a very capable resource for slowing the spread of wildfires and can be a valuable addition to a firefighter’s toolbox,” Gabbert concludes.

Whether those unique qualities are enough for it to ensure it carries on fighting fires in the future remains to be seen.

With thanks to Bill Gabbert at Fire Aviation.

This article has been updated to include the correct location of Moses Field, which is in Washington state.