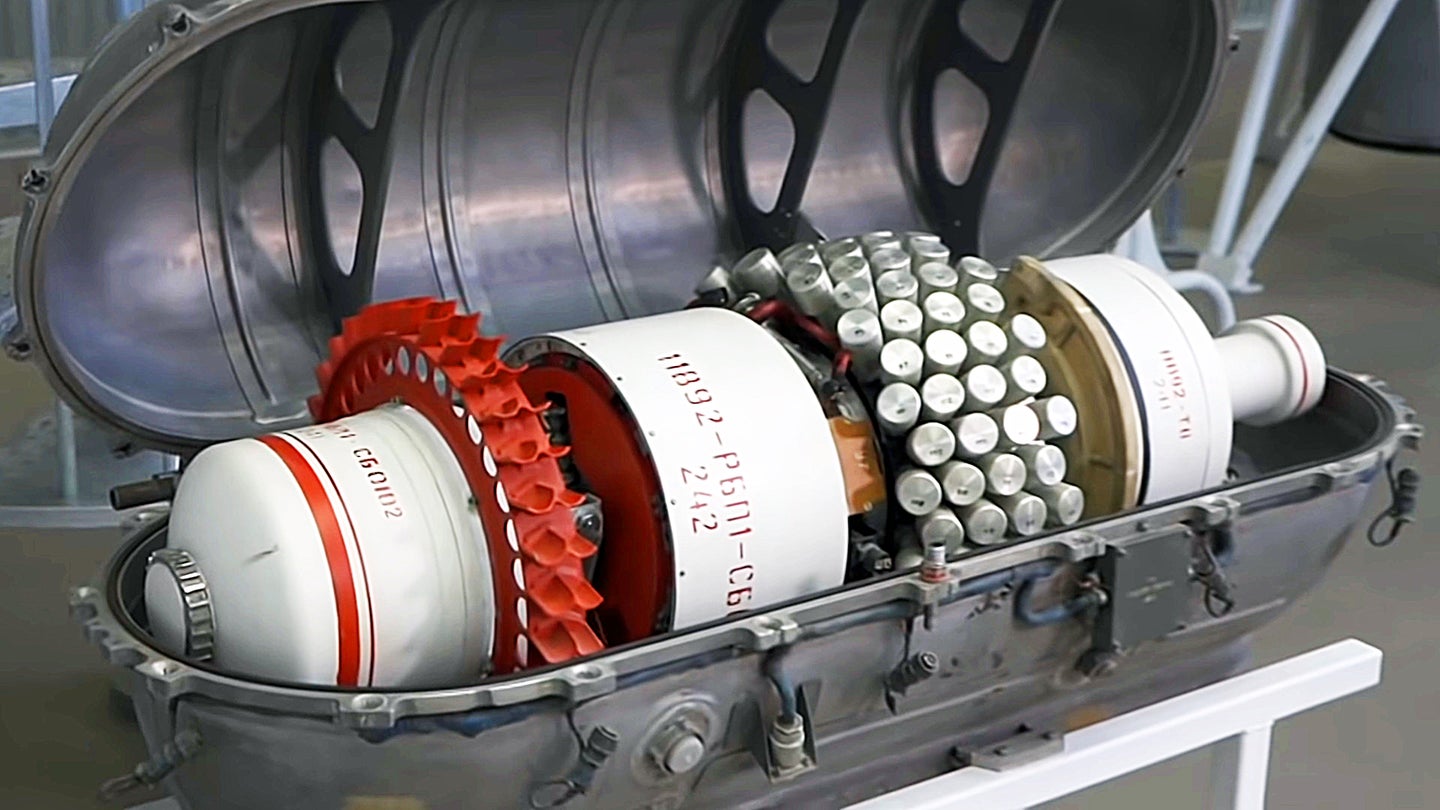 The Russian Ministry of Defense's official television station, TV Zvezda, has given the world the first-ever public look at the Shchit-2, or at least a mockup thereof. This was a Soviet-era missile-like space weapon primarily intended to protect Almaz military space stations from incoming threats. The Shchit-2 was a follow-on project to the Shchit-1 self-defense system, which featured a 23mm cannon and is the only gun to have been fired in space, at least that we know about.

The most recent episode of TV Zvezda's "Military Acceptance" program was focused on the Almaz series and associated developments, including both the Shchit-1 and the Shchit-2. Examples of both systems, among other things, were on display in a restricted area at NPO Mashinostroyenia when TV Zvezda's reporter visited recently. NPO Mashinostroyenia is a Russian state-run space development firm, which evolved from a Soviet entity, known simply as OKB-52, that was responsible for, among other things, the development of the Almaz space stations.

A televised visit by Russian Defense Minister Sergei Shoigu to NPO Mashinostroyenia earlier this year had already yielded the best and most complete view of the Shchit-1 system to date. You can read more about that gun, as well as the Almaz program, here. Anatoly Zak, a Russian author who also manages the website RussianSpaceWeb.com, had been among the first to notice that new look at the Shchit-1 system, as well as this public debut of the Shchit-2.

The Almaz program was a covert effort to develop military space stations, primarily outfitted to conduct intelligence, surveillance, and reconnaissance missions, hidden within the Saylut civilian space station project. The Almaz effort, which began in the 1960s, was only officially declassified in the early 1990s after the fall of the Soviet Union.

The Soviets had planned to arm the Almaz stations from the very beginning, fearing attacks by American anti-satellite weapons, including small, but highly maneuverable "killer satellites" and more traditional interceptors. An example of the Shchit-1 system actually made it into space attached to the Almaz OPS-2 satellite. The Soviets conducted a live-fire test of that gun remotely on January 24, 1975, the station's last day in orbit.

The outcome of that test remains classified and the next Almaz space station, OPS-3, launched without any weapons installed. OPS-4, which never made it to space, was supposed to carry the Shchit-2 system. There's no indication Shchit-2, the general existence of which has been known before know, ever went into space, either, though details about the system remain extremely limited.

As to the weapon itself, Leonard Smirichevsky, the current head of NPO Mashinostroyenia, described it to TV Zvezda's reporter as having four major components. The base of the system is a solid-fuel rocket motor, which is then attached to a spin-stabilization system consisting of a rotating wheel with blade-like fins. There there is a hybrid propulsion-warhead section, which we will come back to in a moment, followed by a proboscis-like radar seeker at the front.

By far, the propulsion-warhead section is the most interesting part. Outwardly, it has what appears to be a circular array of small, grenade-like charges, which one would imagine would unleash a cloud of shrapnel that would particularly dangerous to other objects in the vacuum of space. However, these projectiles are actually solid and are designed to act as hard-kill interceptors, destroying whatever they hit through the sheer force of the impact, according to Anatoly Zak. More interestingly, Smirichevsky made clear to TV Zvezda that this portion of the weapon was also used to propel it in some fashion, though he did not elaborate.

"Upon their ignition, the chambers/grenades might have fed hot propulsive gas into a single or  multiple combustion chambers at the center of the contraption, producing either the main thrust and/or steering the vehicle," Anatoly Zak wrote on RussianSpaceWeb.com. "When the missile reached the proximity of the target, according to its guiding radar, the entire vehicle would explode and the small solid chambers would eject under their own propulsive force in every direction acting as shrapnel."

How Shchit-2, which is said to have had an expected maximum effective range in space of just over 62 miles, was supposed to be launched is also not entirely clear. "The weapon was stored in the coffin-like container, which appeared to a [sic] have a remote control for the activation by the crew aboard the Almaz and a spin-up mechanism, which could be activated at the release of the weapon in orbit," Zak noted. The reported plan was for the Almaz OPS-4 station to carry two of these missile-like weapons.

What happened to Shchit-2 after the end of the Almaz program in 1978 is entirely unknown. It's also not clear why the Russians have decided to offer a look at the system now.

It does come amid renewed discussion about on-orbit anti-satellite weapons, including interceptors and directed energy weapons, as well as killer satellites, and the development of these systems, both in Russia and the United States, among other countries. Last year, Chief of Space Operations General John "Jay" Raymond, U.S. Space Force's top uniformed officer, publicly accused the Russian government of carrying out an on-orbit anti-satellite weapon test wherein one of its very maneuverable and small "inspector" satellites fired an unspecified projectile. The U.S. government has already expressed concern that these orbital inspectors, ostensibly designed to check up on other Russian satellites in space, could have an offensive capability.

There is no indication one way or another that the projectile launched from this Russian satellite was in any way related to the Shchit-2 weapon, a design that is now more than four decades old, at the very least. At the same time, it certainly underscores the potentially significant knowledge base in Russia with regards to the development of such systems.

Whatever the reasons the Russian government has for disclosing the Shchit-2 design publicly now, and no matter what the current state of on-orbit anti-satellite weapons in Russia might be, it is absolutely fascinating to get our first glimpse of this previous top-secret Soviet space missile.