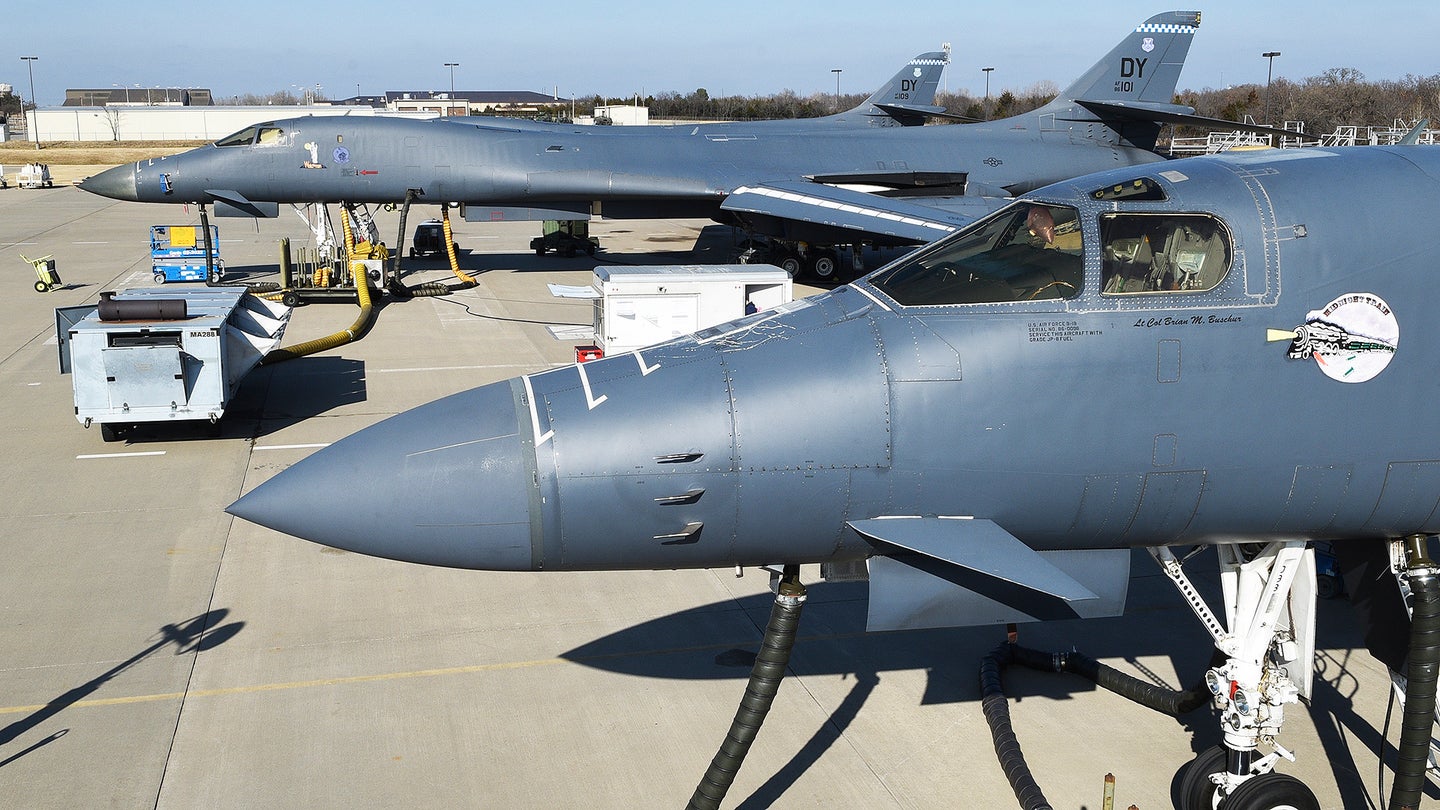 On April 8, B-1B Lancer serial number 86-0104 experienced a ground emergency relating to an augmenter fuel pump filter housing, after landing at Ellsworth Air Force Base, South Dakota. Air Force Global Strike Command's public affairs office has now confirmed that subsequent precautionary one-time inspections carried out on all B-1B aircraft as a result of the discrepancy produced concerning enough results that more invasive inspections were ordered, along with a fleet-wide grounding earlier this week.

The inspections will be performed under the guidance of a Time Compliance Technical Order (TCTO), and each jet will be returned to service individually upon completion. There is no timeline presently for when the B-1Bs are expected to be flying again. Air Force Global Strike Command's (AFGSC) public affairs office told us that other bombers — B-52 and B-2 aircraft — will continue to support combatant commands across the globe.

The immediate inspection of 86-0104 on April 8 revealed a massive hole in the filter housing. This filter is on the outside of the F101-GE-102 engine, but plays a crucial role. Needless to say, with a hole, it leaks large amounts of fuel. 86-0104 had been seen trailing a large plume of unburned fuel on landing. A pressurized fuel leak is a hazard in itself, but if the filter housing is not functioning properly, the pilots cannot select augmented thrust — better known as afterburners.

Without afterburners, the available thrust is significantly reduced. The F101 is rated at 17,390 pounds for maximum military power (dry thrust). Maximum afterburner almost doubles available thrust at 30,780 pounds, and is needed for emergencies and some maneuvers. Above all else, afterburner operation is critical for B-1 takeoffs. B-1s cannot fly at all without properly functioning afterburners.

This incident and resulting safety stand down is the latest in a long line of problems the B-1B fleet has faced in recent years. In fact, this isn’t even the first failure and stand down for this exact part. In 2018, the augmenter pump filter housing failed on serial number 86-0109 as well.

At length, we’ve documented the various stand-downs, overhauls, and upgrades the B-1 fleet has needed to make it to its eventual replacement by the B-21. The most impactful stand down in recent years was the result of a failed ejection and subsequent emergency landing in Midland, Texas, which we wrote about here and here.

As The War Zone was first to detail, restrictions have been placed on the oft-ailing B-1’s operations, including on the aircraft’s once-prominent low-level flying capabilities, in an effort to preserve the fleet, 17 of which are now being retired as a result of that same initiative. As it sits now, just 45 examples will remain in service until the type’s retirement in the 2030s.

We will update this article as more details emerge.

Air Force Global Strike Command has now provided the following full statement on this grounding and events leading up to it:

The Air Force Global Strike Command commander, Gen. Tim Ray, ordered a safety stand-down of the B-1B Lancer fleet April 20. The safety of Airmen is the command's top priority. During the inspection process following a B-1B ground emergency on April 8 at Ellsworth Air Force Base, South Dakota, a discrepancy with an Augmenter Fuel Pump Filter Housing was discovered. As a precautionary measure, the commander directed one-time inspections on all B-1B aircraft to resolve this issue. After further analysis, the commander stood down the fleet because it was determined a more invasive inspection was needed to ensure the safety of aircrews. Individual aircraft will return to flight when they are deemed safe to fly by Air Force officials. The Air Force takes all incidents seriously and works diligently to identify and correct potential causes. More details may be released when available. Air Force Global Strike bombers will continue supporting combatant commands across the globe.