Adding the proven Litening advanced targeting pod to the C-130H could help give the aging airlifters a new lease of life. 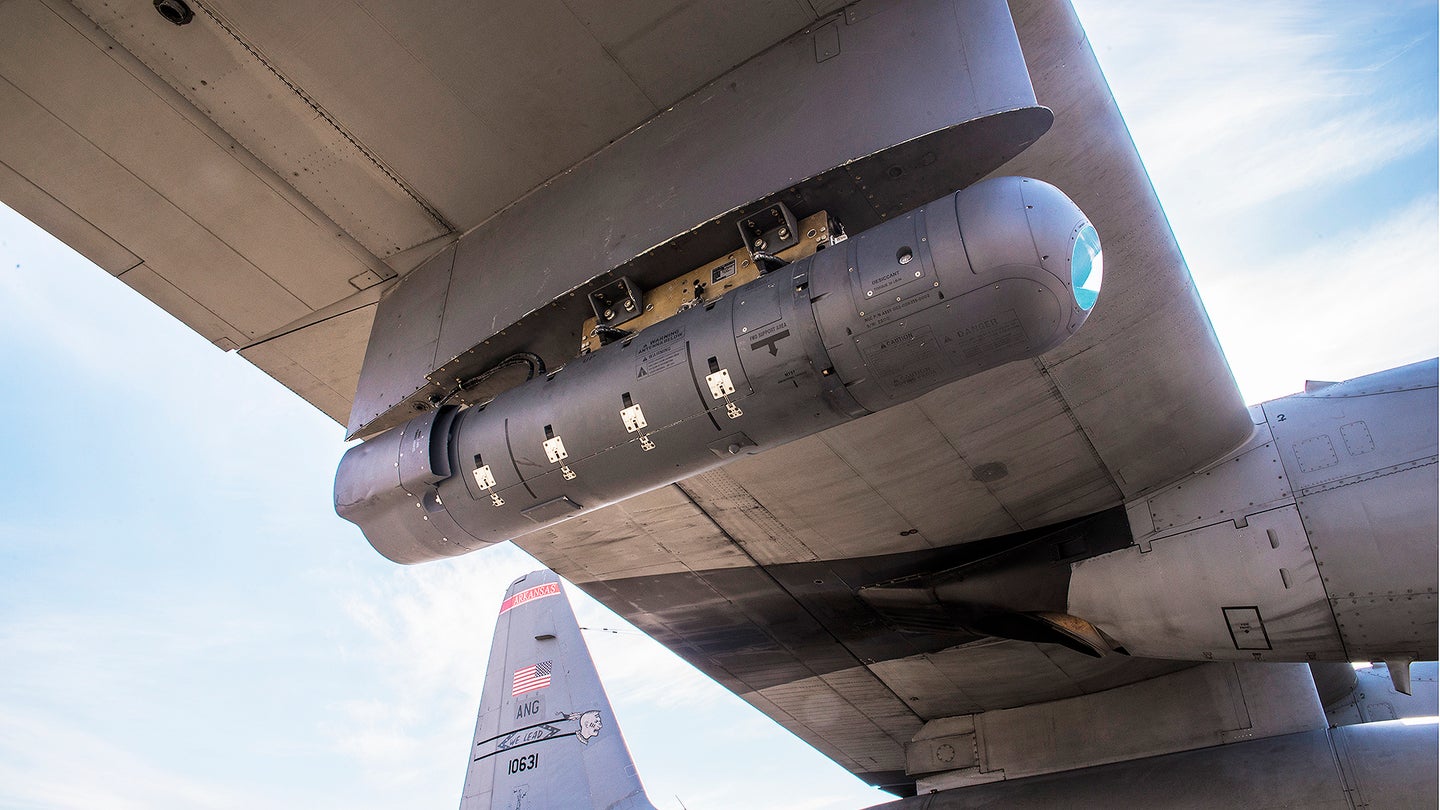 The U.S. Air Force’s workhorse transport aircraft, the C-130 Hercules, has undertaken operational testing with the Litening multi-sensor pod, traditionally used for precision targeting by fighters and attack jets. If it makes it to the front line, the new capability would initially help the C-130H model in its core airlift mission by ensuring it can put airdropped loads exactly where they’re needed, as well as checking to make sure landing zones are clear and giving the lumbering aircraft an added tool to avoid hostile air defenses. Beyond that, the pod could be added to other aircraft, too.

Typically, a combat aircraft uses the Northrop Grumman Litening targeting pod to locate, fix, and target enemy positions while deploying precision-guided munitions. However, the tests at Davis-Monthan involved supporting the Hercules as part of the precision airdrop initiative — delivering dropped loads more accurately, especially from high altitude, which helps put the aircraft outside the range of ground fire. That latter factor is especially important when working in conflict zones, where even poorly equipped militia forces are likely to be armed with weapons that can pose a serious threat to a low-flying transport aircraft.

Equipped with various sensors, including a high-resolution forward-looking infrared (FLIR) and full color TV sensor to capture imagery day and night, the pod could be used to identify a particular drop zone, before generating specific geographic coordinates, then tracking items of cargo dropped via the C-130’s rear ramp. As well as ensuring cargos land in the right area, sometimes it can be just as important that they don’t fall in the wrong area, something that can have a seriously detrimental effect for friendly troops and civilians alike.

“AATC is working to fully integrate the Litening [targeting pod] with the C-130, primarily to aid the precision airdrop initiative,” explained Lieutenant Justin Brumley, the director of operations at AATC. “The pod helps the C-130 airdrop mission by adding the ability to generate airdrop location coordinates, locate and avoid enemy and sensitive objects, such as people or structures; and track airdropped supplies following the airdrop release.”

It’s unclear if the trials also involved the Joint Precision Airdrop System, or JPADS, a GPS-aided airdrop capability that already exists in service. Combined with this system, the Litening pod could be used to get coordinates, before using JPADS to program the actual pallets to aim for the correct landing spot.

In the past, the Arkansas Air National Guard has already been earmarked for Litening pod trials, modifying two aircraft with underwing pylons to carry the pods and sending these planes to Tucson Air National Guard Base in Arizona for a series of trials lasting around six months in 2016. According to a news release at the time, these were planned to encompass airdrops, assault landings, and low-level and high-level formation flying.

Although the results of the earlier tests were “promising,” according to officials, there is seemingly no public account of what was achieved and efforts to integrate the pod on the C-130H then seemed to lose momentum.

That’s now changed with the recent activity at Davis-Monthan, during which the AATC worked alongside that base’s 563rd Rescue Group as part of an operational testing effort. The 563rd was on hand to provide training airdrop equipment, load it into the two aircraft, and also provide a drop zone location at Marana Regional Airport, a relief airfield serving Davis-Monthan.

“Operational testing means testing in a simulated operational environment,” Brumley added. “In this case, it means airdropping equipment to an active drop zone.”

While this latest test is concerned with the C-130H ‘legacy’ aircraft operated by the Air National Guard and Air Force Reserve Command, there’s hope to integrate the pod on other platforms, too. The more modern C-130J would be an obvious candidate. Overall, pod-based systems offer a particular advantage in that they can be adapted to different airframes and can be installed or not depending on the particular mission requirements.

“If the Litening TGP becomes a fielded system for the C-130H, then a large amount of groundwork is laid for other platforms to readily implement this potentially game-changing technology,” stated Major Richard Damron, a project analyst for the AATC C-130H Test Detachment.

In Australia, meanwhile, the C-130J is the platform that’s been used in a similar set of experiments using the Litening pod, as part of the wider Plan Jericho modernization drive for the Royal Australian Air Force. Flight trials began in January last year, again with the pod — borrowed from the Australian F/A-18A/B Hornet fighter jet fleet — mounted on a pylon below the wing. The trials aircraft also has a new high-speed satellite communications antenna fitted to transmit greater amounts of information, such as high-definition video, to other assets.

Should the Litening begin to be fielded operationally by the U.S. Air Force’s C-130H fleet, it not only promises to improve the accuracy of airdrops and the survivability of the aircraft but also has other potential applications, too. It could be used in support of a wide range of humanitarian assistance and disaster relief missions, including monitoring natural disasters, such as wildfires, or state emergencies.

The C-130’s long on-station time coupled with the pod’s datalink would allow the aircraft to transmit real-time imagery to a ground station, providing a non-traditional persistent intelligence, surveillance, and reconnaissance (ISR) capability in benign scenarios. For instance, as well as airdropping aid in the wake of a hurricane, a Litening-equipped C-130 could also remain on station to monitor the extent of the damage below, streaming imagery live to command centers and other rescue assets.

As well as monitoring the situation on the ground during the mission, a Litening pod could provide the Hercules crew with a significant boost in situational awareness (SA) throughout the flight. In this way, the pilots would be better able to operate from austere or unfamiliar runways and airstrips aided by high-definition imagery of these locations. Other efforts have been made to enhance SA for U.S. Hercules variants, too, including plans to use the cameras already available in the directional infrared countermeasures system on the HC-130J Combat King II rescue aircraft to turn them into an augmented vision system, in a project nicknamed Sauron’s Eye.

Some C-130Hs have also received the Real-Time In Cockpit, or RTIC, modification, which provides another means of increasing situational awareness. RTIC provides information on the relative positions of other aircraft, as well as potential threats, and facilitates communication between different pilots. You can read more about RTIC in this feature on a separate AATC test program, involving the KC-135 Stratotanker.

If fielded on the C-130H, the Litening pod could fulfill one of the elements the Air National Guard is looking to add to these aging airlifters to keep them viable alongside the newer C-130Js. In its 2021 Weapons Systems Modernization Priorities Book, the Guard notes that “A targeting pod capable of providing standoff acquisition and assessment of drop zones/landing zones ensuring first pass success is a must in future combat” for the C-130H specifically.

Ultimately, the service would like an open-architecture pod capable of holding additional items, as well, such as a jammer, decoys, and kinetic and non-kinetic defensive measures. Similar types of multifunctional pods, providing targeting, situational awareness, and more are already making their way into service, including the Legion Pod for the F-15C fighter jet, which you can read about here.

Potentially, the kinds of capabilities the Air National Guard is eyeing for its C-130Hs could also be provided in another form, thanks to the aircraft’s prodigious load-carrying qualities. As an alternative to wing-mounted systems, one other option could be the Special Airborne Mission Installation and Response (SABIR), a modular system added to the aircraft’s rear paratrooper doors that can mount surveillance arrays, communications nodes, a radio and television broadcast antennas, among others.

There are other initiatives, too, intended to extend the useful service life of the C-130H fleet, including upgraded engines and eight-bladed propellers, which promise to save millions in operating costs, an effort you can read more about here. While all 134 Air National Guard C-130Hs require propulsion system upgrades, currently only 34 are actually funded for this upgrade.

Despite its age, the C-130H clearly still has considerable utility for the Air National Guard and Air Force Reserve Command, while the Litening pod integration, if successful, could yet provide an important and wide-ranging advance in the tactical capabilities of this, and potentially other airlifters.

Update, April 16: Following the publication of the original article, Northrop Grumman got in touch with us to confirm that their Litening pod is also undergoing tests on other C-130s as part of the SABIR installation. This is the Special Airborne Mission Installation and Response system that we mentioned would also be a suitable candidate for mounting the pod on a Hercules. In this case, the pod has recently been flight tested on HC-130J Combat King II rescue aircraft flown by the Air National Guard in Alaska and at Red Flag. In addition to supporting precision airdrops of pallets, the pod can also support paratrooper jumps, the company explains. This would be ideal for the HC-130J mission of delivering pararescue jumpers, who will typically provide emergency treatment to patients before they are extracted by helicopters.

Militants Fire RPG At C-130 Then An MQ-9 Reaper Crew Promptly Locates, Tracks, And Kills Them

The incident is a prime example of the armed overwatch missions that American unmanned aircraft have been flying for years now.