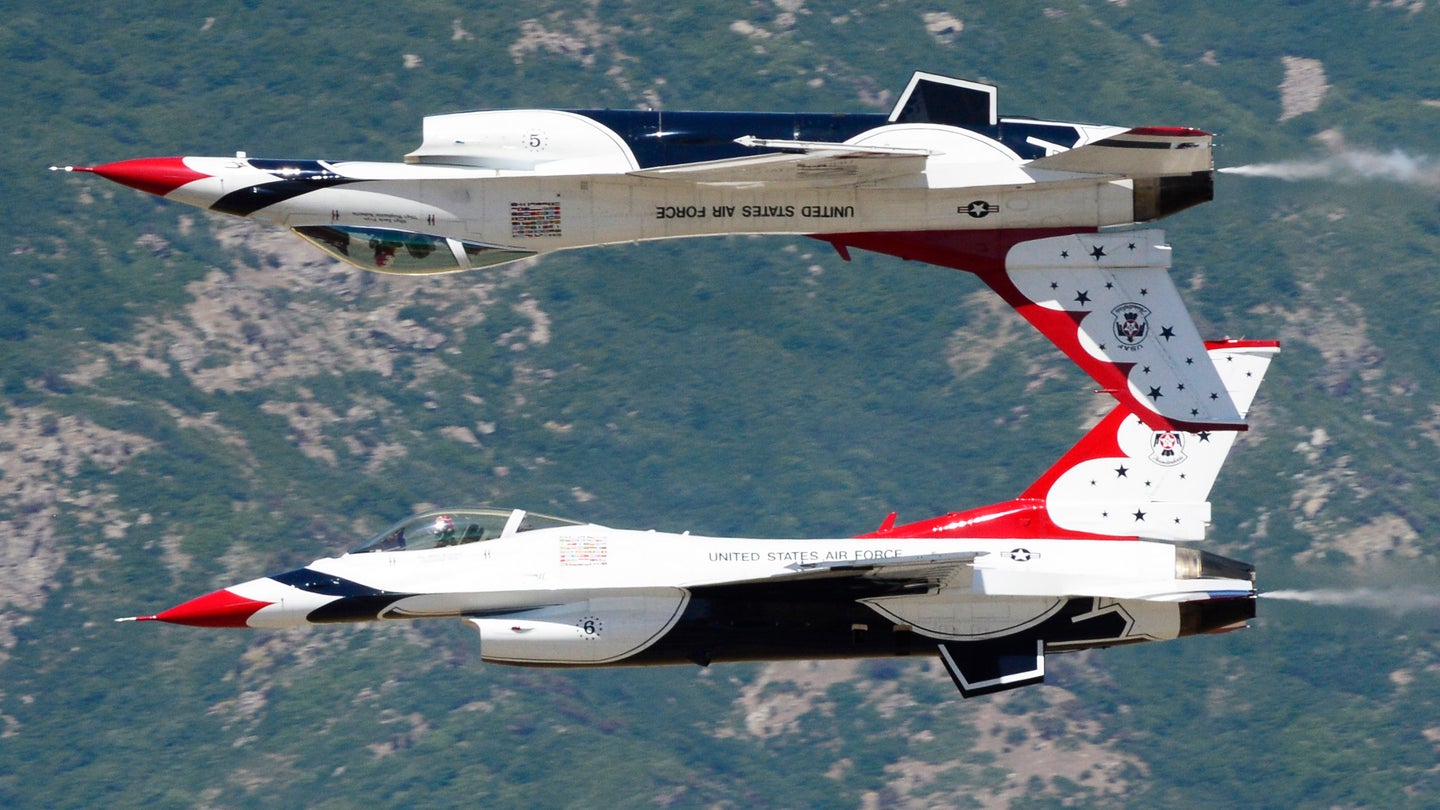 The U.S. Air Force Thunderbirds flight demonstration team has revealed details about its new air show routine, a pared-back, highlights reel kind of display that is designed to showcase the team's airmanship as well as keep spectators engaged, inspiration for which was provided by former Disney employees, and even the rival U.S. Navy Blue Angels. As the team worked through a tough 2020, which saw the air show season largely canceled, efforts instead focused on saluting first-responders, as well as completely revising their existing demonstration routine.

This is only the third time a Thunderbirds aerial demonstration has been devised from the ground up. The first was when the team was established in 1953, the second in the aftermath of the 1982 Diamond Crash, which tragically claimed four pilots’ lives, and prompted the switch to the F-16 fighter jet, advanced versions of which are still flown today. Indeed, these aircraft (Block 52 F-16C/Ds) are some of the most advanced — and youngest — Vipers anywhere in the Air Force.

For the crowds watching the Thunderbirds starting from the 2021 season — which kicks off with the Cocoa Beach Air Show in Florida on April 17-18 — the new routine is cut back from the previous approximately 1.5 hours to around 50 minutes. This has been achieved by removing six of the slightly less stunning, or more repetitive, maneuvers from the air display portion of the show and tightening up the carefully choreographed ground show.

“Optimizing crowd experience,” in the words of Major Remoshay Nelson, the Thunderbirds Public Affairs Officer, was the key driver behind the revised routine. Emotion and entertainment are brought together, which is where the cartoon mouse comes in.

“A lot of times we realized that our demonstrations can become a series of athletic maneuvers more like the Harlem Globetrotters, as opposed to a Cirque du Soleil performance,” explained Colonel John Caldwell, the commander of the team, or Thunderbird 1. “It took a lot of coordination, a lot of work, a lot of research for us to get to the point where you can tinker with something as complex as a fast jet demo team performance. Typically these things evolve over years and years.”

“We started thinking about who else does this on a day-to-day basis,” continued Thunderbird 3, Major Zane Taylor, now on his second season with the team. “We started looking around in industry: Disney does this every day with live performances.” Major Taylor confirmed that the team spoke to former Disney employees “at length,” consulting on issues such as ideal show length, how to create the optimum finale — or multiple finales — how to script the show and keep the audience entertained. This helped the team settle on a shorter performance as the ideal, from a crowd point of view. Keeping things brief also has a more practical benefit. After all, sometimes the previous high-level (clear-weather, 8,000-foot ceiling) show could keep the jets in the air as long as 47 minutes, meaning F-16s were landing “on fumes because we were running out of gas,” remarked Colonel Caldwell.

As for the enduring inter-service rivalry with the Blue Angels, the Thunderbirds spoke to them as they set about revising their program, too. “Truth be told,” remarked Colonel John Caldwell, “some of the things that we added and changed in our demos were a result of the relationship and the respect we have for those guys. They actually contributed in some way to the changes that we made.” Noteworthy here is the fact that the Blue Angels have also introduced an abbreviated display program, which you can read about here, as a result of swapping their older F/A-18C Hornets for newer, but well-worn Super Hornets.

The display sequence is now designed to bring the complexity, challenge, and capabilities of the F-16 and its pilots to the fore. This has been done in four key ways.

First, the team has streamlined its famous ground show to better replicate how frontline airmen rapidly generate aircraft when on alert, in what is described as a “salute to airmen deployed around the world.” Also, instead of plugging into the jets to speak over the intercom, the pilots and ground crew now communicate exclusively using various hand signals and other non-verbal communication. This portion is reduced by around 10 minutes and now focuses on speed, replicating the kinds of conditions that might be found in an Agile Combat Employment (ACE) exercise, for example.

Providing the core of the air display itself are the Thunderbirds’ six demonstration pilots, kicking off with the excitement of the attention-grabbing grand opening, followed by a succession of maneuvers that are now less repetitive and more tightly interwoven, over a period of around 30 minutes. Aircraft repositioning times between the diamond and solo maneuvers are cut back, keeping the high tempo of the overall show and providing for more continuous action on centerstage.

Thirdly, as well as dropping some of the older maneuvers, some new ones have also been added, including the two shown below, the Stinger Cross Break and the Low Bomb Burst With Hit:

Finally, the team has also incorporated new music into its show, designed to match the high energy and performance of the jets. The team members didn’t want to reveal what audiences are going to hear blaring from the public address systems, but they promise it will be appropriately impactful.

The Thunderbirds represent a brand identity that’s just as enduring as the Disney franchise, and their return to the air show circuit will no doubt be enjoyed by millions of Americans in this new season. Final words to Colonel John Caldwell: “I would strongly encourage you to get out in 2021 and go find us on the road. Watch one of these shows. Because if you’ve seen the Thunderbirds in the past, I can guarantee you haven’t seen them the way they are now.”

Update, April 15: The Thunderbirds have been in touch to provide an update to the story, clarifying a statement that one of the pilots made. In reworking its routine, the team consulted “former Disney entertainment professionals,” resulting in a new show that is heavily influenced by them and modeled, specifically, after how they conduct firework performances. The team has also shared the following video revealing the updates to their 2021 show: