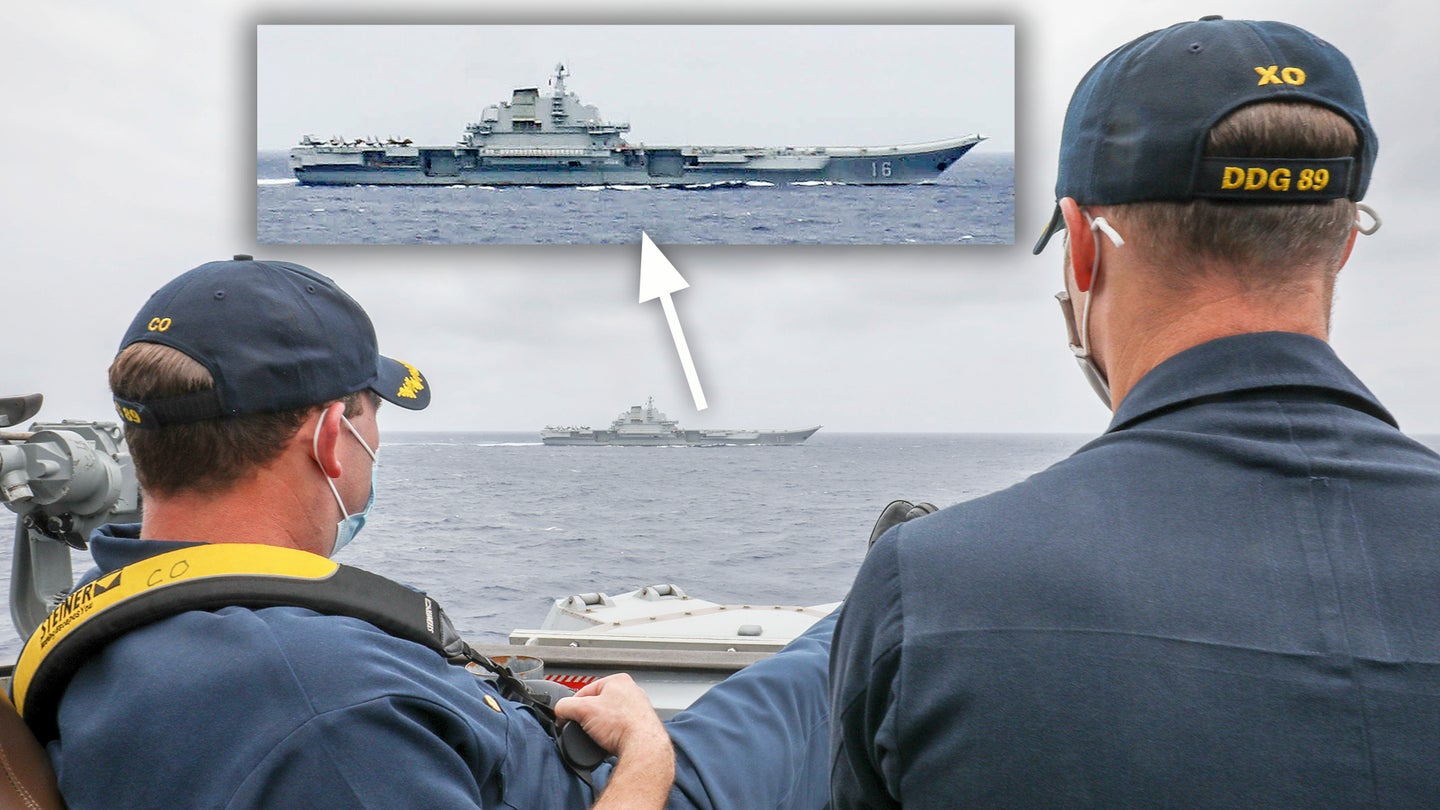 Tensions between China and its regional neighbors in the South China and Philippine Seas increased markedly this week. Naval exercises by both the United States and China have massed an unusual number of warships in the South China Sea at a time of renewed diplomatic friction as concerns over China’s territorial ambitions grow.

The uptick began late last week. The War Zone reported that China’s Liaoning Carrier Strike Group (CSG) maneuvered through the strategic Miyako Strait on Sunday, just southwest of Okinawa. Since then, a separate point of tension between China and the Philippines over a mass of fishing vessels identified as part of China’s People’s Armed Forces Maritime Militia (PAFMM) led to a series of heated diplomatic exchanges between Manila and Beijing.

Open-source intelligence analysts tracked the movements of the Liaoning carrier strike group this week as it appeared to traverse the Luzon strait, the body of water that, along with the Bohai Channel, separates the Philippines and Taiwan. This crucially strategic area is also the primary boundary between the Philippine Sea and the South China Sea and connects the greater Pacific to the northern reaches of the South China Sea.

As such, this area is of intense reconnaissance interest to all stakeholders in the region. The United States military paid particularly close attention to these waters in July last year, regularly flying intelligence-gathering planes such as the EP-3E Aries II and RC-135V/W Rivet Joint into the area. Since then, the surveillance flights have continued, often spiking at times when there is heavy Chinese naval activity in the area.

The Liaoning CSG maneuvers around the strait were closely observed by Japan and the United States. Analysts identified a U.S. Navy Alreigh Burke class destroyer shadowing the group, as it headed west towards the South China Sea:

This striking shot captured U.S. Navy Cmdr. Robert J. Briggs and Cmdr. Richard D. Slye as they monitored the Liaoning, just thousands of feet away, from the bridge wings of the USS Mustin earlier in the week on April 4.

By April 10th, analysts flagged one Type 055 Renhai class missile destroyer and one Type 052D Luyang class destroyer splitting from the group and heading north towards the Taiwan strait:

A cluster of vessels was spotted via satellite imagery just east of Taiwan’s Pratas Islands. In recent years, Pratas Island has been of increasing concern to observers of the South China Sea. Writing for The Diplomat, analyst Yoshiyuki Ogasawara has focused on the Pratas Islands as a potential target of China’s geopolitical ambitions as it approaches the centennial anniversary of the Chinese Communist Party on July 23 this year. Ogasawara argues that capturing the island could be a way for China to demonstrate progress towards its goal of reunifying Taiwan without sparking a wider conflict.

The small island located between China, Taiwan, and the Philippines has a strategic vantage on the South China Sea. Its small size and flat geography make it difficult to defend. According to Ogasawara, the island typically has no permanent residents but has seen a quiet build-up of a garrison of about 500 Taiwanese Marines. Last year Taiwanese F-16s began flying patrols with live Harpoon anti-ship missiles in an effort to deter China’s interest in potentially capturing the island. U.S. Navy P-8 Poseidons have done the same. Chinese military exercises apparently focused on capturing the island were reported in May last year.

The area has also recently seen an increase in drone incursions. On Wednesday, Taiwanese official Ocean Affairs Council Chair Lee Chung-wei addressed the drone issue, describing them as circling the island. He declared a willingness to shoot them down, stating “if we need to open fire, we will open fire.” Additionally, China has recently invested heavily in coastal bases, such as a massive new helicopter base directly across the strait of Taiwan that could prove essential to a major offensive against the island.

Meanwhile, the week saw a near-constant stream of Chinese overflights of Taiwan’s air defense identification zone. According to Taiwan’s Ministry of National Defense, there have been 46 overflights across the southwestern portion of the Taiwan Strait. These flights have included as many as fifteen People’s Liberation Army aircraft at one time, including 8 J-10 and 4 J-16 fighter aircraft in one incident.

China and the Philippines also appeared to deepen their dispute over more than two hundred Chinese vessels occupying an area in the West Philippines Sea known as Whitsun Reef. On April 5th, the Chinese embassy in the Philippines issued a statement expressing that it is “completely normal for Chinese fishing vessels to fish in the waters and take shelter near the reef during rough sea conditions.”

On Thursday, the U.S. State Department provided a readout stating that Secretary of State Blinken had spoken with his Philippine counterpart Teodoro Locsin, Jr. about the “massing of PRC maritime military vessels.” Blinken additionally “reaffirmed the applicability of the 1951 U.S.-Philippine Mutual Defense Treaty to the South China Sea.”

Earlier in the year, China adopted a new law that some have claimed violates the United Nations Convention on the Law of the Sea (UNCLOS) that permits the Chinese Coast Guard to fire on foreign vessels in some circumstances. The legal change added ongoing concern about China’s growing network of artificial outposts through the South China Sea.

Last month, Australia, India, Japan, and the United States issued a joint statement as part of the so-called “quadrilateral security dialogue” or “Quad,” affirming each country's commitment to upholding the “rules-based maritime order in the East and South China Seas.” Security concerns and the future of the Quad alliance will almost certainly be a key subject in upcoming talks between Japanese Prime Minister Yoshihide Suga and President Biden on April 16th.

In the coming weeks, it will be crucial to see if regional stakeholders are able to manage these tensions. Negotiations and inter-alliance relationships, especially within the emerging Quad, will be crucial to creating an effective counterbalance to the increasingly capable and assertive Chinese military’s operations in the region.

The War Zone will continue to watch and report developments in the East and South China Seas.