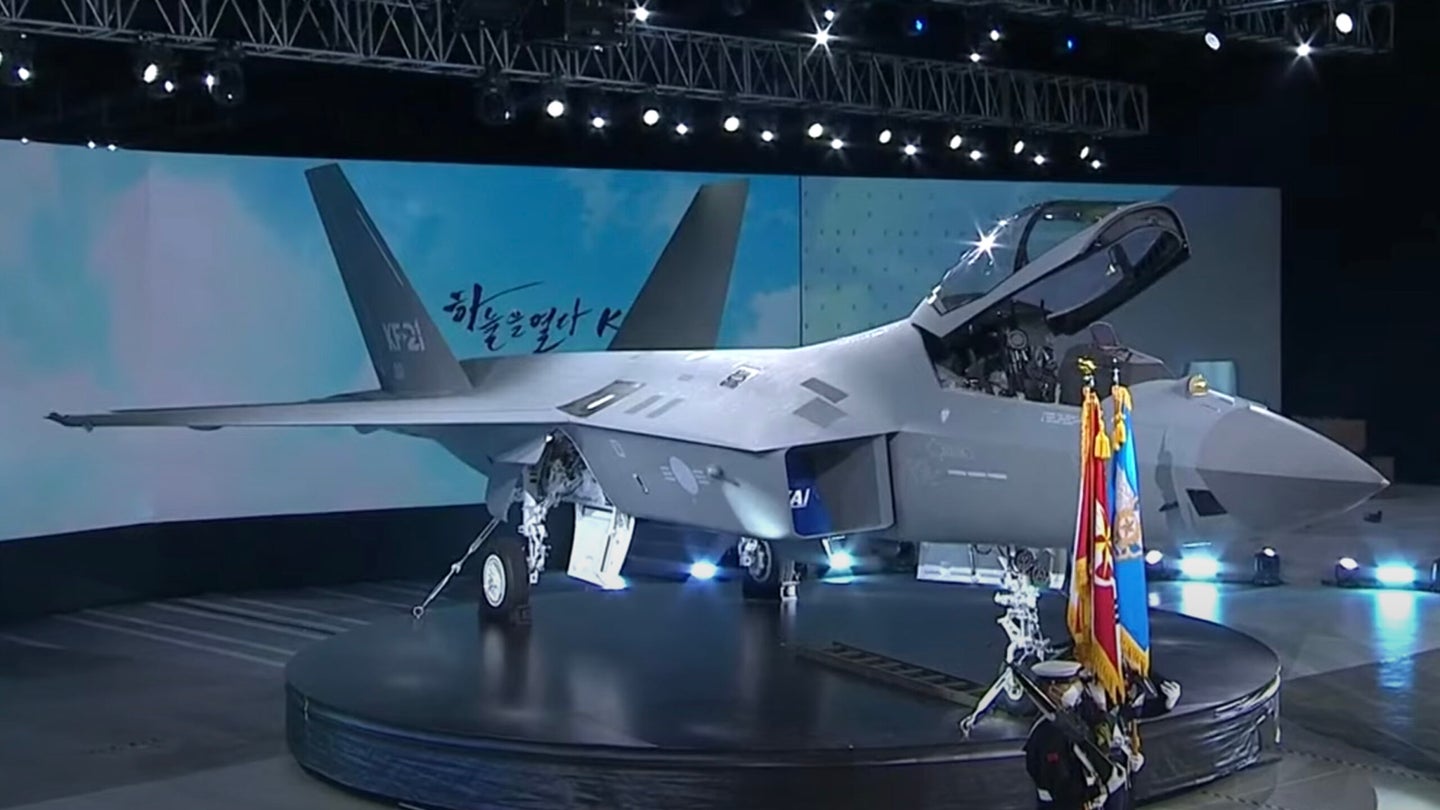 South Korea has rolled out the first prototype of its next-generation indigenous fighter, previously referred to as the KF-X, and officially named it the KF-21 Boramae, meaning hawk in Korean. The jet, South Korea’s most ambitious yet, is expected to fly next year and the country’s president has confirmed a demanding schedule to complete the development program for the initial version of the aircraft by 2026.

The Republic of Korea Air Force (ROKAF) is expected to induct 40 KF-21s by 2028 and have the full fleet of 120 aircraft deployed by 2032. The aircraft are urgently required to replace aging F-4E Phantom II and F-5E/F Tiger II fighters and are intended to complement F-35A stealth fighters—60 of which are being procured from the United States—as well as older F-15K Slam Eagle and F-16C/D aircraft.

The rollout ceremony took place today at the Korean Aerospace Industries (KAI) facilities in Sacheon, South Gyeongsang province, and saw an address by President Moon Jae In. He heralded “a new era of self-defense,” and “a historic milestone in the development of [South Korea’s] aviation industry. Moon also set a goal for South Korea to become the world’s seventh-biggest aviation industrial power by the 2030s.

Full-scale development work on what was then known as the KF-X began in 2015 and in 2019 South Korea’s Defense Acquisition Program Administration (DAPA), which manages defense procurement, announced the go-ahead for the construction of a prototype. Last September, KAI announced that the final assembly of the prototype fighter was underway, mating the fuselage sections and wings.

There are plans for four single-seat and two twin-seat prototypes, each of which will be powered by a pair of U.S.-supplied General Electric F414-GE-400K engines. The manufacturer was selected in 2016 to supply 240 F414 production engines plus spares program. Variants of this turbofan are also found in the F/A-18E/F Super Hornet and EA-18G Growler, and Sweden’s JAS 39E/F Gripen, and are also planned to power the Indian Tejas Mk 2.

Seoul expects to issue its first KF-21 production contract in 2024, leading to deliveries of the Block 1 variant in 2026. Block 1 will offer air-to-air capability only, while Block 2 will be cleared for air-to-ground missions.

While developing and producing an indigenous multi-role fighter is a significant challenge, KAI has amassed plenty of experience in producing high-end military aircraft, including the supersonic FA-50 light combat aircraft used by the ROKAF and exported. Korean industry was also involved in a local production of the Block 52 F-16C/D multi-role fighter for the ROKAF.

The KF-21 does exhibit some low-observable features, adopting the canted twin tails, fuselage shaping, and edge alignment, among other features, established by the F-22 and F-35. However, it does not provide the kind of all-aspect stealth offered by these U.S. fighters. Instead, the twin-engine jet is intended to fill the gap between the F-35 and the F-16, in terms of capabilities, but should be cheaper overall than the F-35, the sustainment cost of which is a cause for concern in the United States and elsewhere. The KF-21’s weapons will be carried externally, on six under-wing and four under-fuselage hardpoints.

Once the jet is in service — around 2026 — work is expected to commence on a more advanced derivative, featuring internal weapons carriage, for example. In its initial form, the KF-21 is expected to have a radar cross-section equivalent to the Eurofighter Typhoon, but successive upgrades should reduce this much further. Even the fighter flying into combat without weapons in its most survivable state could be an important sensor node for other fighter aircraft of lesser capabilities.

Under a project worth a total of $7.9 billion, South Korea is developing the KF-21 together with Indonesia, which agreed to pay 20 percent of development costs and plans to acquire 50 examples for its own air force. In the past, Indonesia was behind on payments for the program and there were suggestions that its status in the program could be under threat.

However, Indonesia’s Minister of Defense Prabowo Subianto attended today’s rollout ceremony and Korean officials confirmed that the cooperation plans remained in place. The plan is to make the aircraft available for export to other countries, too.

All in all, the KF-21 could be a very attractive proposition for foreign customers. The aircraft has been designed to have better kinematic performance than an F-16C and will feature an active electronically scanned array (AESA) radar, produced by South Korea’s Hanwha Systems, as well as advanced weapons options, including the ramjet-powered Meteor air-to-air missile provided by Europe’s MBDA. Flight tests of a demonstrator radar have already begun using a Boeing 737 testbed.

Weapons have already been selected for the Block 2 version of the KF-21. These comprise the GBU-12 Paveway II, GBU-31/38 Joint Direct Attack Munition (JDAM), GBU-54/56 Laser JDAM, GBU-39/B Small Diameter Bomb I, and the CBU‐105 Wind Corrected Munitions Dispenser (WCMD). All these stores are currently in ROKAF service which should accelerate the integration process.

The new fighter jet is expected to carry a payload of up to 16,975 pounds, a maximum takeoff weight of 56,400 pounds. It is expected to achieve a top speed of around 1,400 miles per hour (approximately Mach 1.83) and have a range of 1,800 miles. Of course, these are brochure numbers, so we will have to wait and see how it plays out in reality once the aircraft is flight tested. Its range, in particular, would be far less during actual combat operations.

While there are a number of other, similar advanced fighter projects with stealthy ambitions are underway, including in Europe, India, Japan, Turkey, and the United Kingdom, the Boramae will be the first to fly. KAI may have traded some advanced capabilities for a more rapid development path for its fighter design, but that could pay off in the long run if the KF-21 secures export orders.

The KF-21 should play a major role in furthering South Korea’s indigenous defense capabilities. In all, 65 percent of components are being made in South Korea. Importantly, KAI is developing critical avionics, including the mission and flight-control computers. Korean industry is also responsible for the AESA radar, electronic warfare equipment, infrared search and track sensor, and electro-optical targeting pod. Mass production of the KF-21 will also create 10,000 new jobs, according to President Moon. This is in addition to 12,000 jobs involved in the project between 2016 and 2020.

Aside from its importance to the South Korean industry, the KF-21 will further bolster the ROKAF’s qualitative edge as it faces a growing military threat from a nuclear-armed North Korea. Already, there is a huge mismatch between the ROKAF and the Korean People’s Air Force (KPAF) in North Korea.

While the most modern fighter jets in the KPAF inventory are a relatively small number of late Cold War-vintage MiG-29 Fulcrums, the ROKAF is spearheaded by F-35As, more than two dozen of which have now been delivered to Cheongju Air Base, where the first examples arrived in March 2019. South Korea can also call upon 60 multi-role F-15K Slam Eagles, advanced versions of the F-15E Strike Eagle, and the survivors of 180 F-16C/Ds originally delivered. Seoul is now in the process of upgrading 134 of its Vipers to the F-16V standard, with new avionics including an AESA radar. Future plans also envisage orders for short takeoff and vertical landing (STOVL) F-35B variants of the Lightning II, which would equip its next amphibious assault ships.

As well as highly capable frontline fighters, the ROKAF has a range of important force multipliers that would be expected to support the KF-21 in combat. These include Boeing E-737 Peace Eye airborne early warning and control (AEW&C) aircraft, otherwise known as the E-7 Wedgetail, which can keep watch over North Korea’s airspace. There are also Raytheon RC-800 intelligence-gathering aircraft that are equipped for signals intelligence, surveillance, and tactical reconnaissance. Additional intelligence, surveillance, and reconnaissance (ISR) capacity is provided by specially configured Dassault Falcon 2000EX aircraft adapted for the role by L3 Communications Integrated Systems. These platforms would help provide the KF-21, and other fighters, with real-time data on North Korean air, land, and sea threats.

Were the two countries to go to war, the KPAF would still be able to put up significant numbers of admittedly obsolete aircraft but would instead rely upon its huge advantage in artillery and mobile missile launchers. In terms of non-conventional weapons, North Korea can call upon an expanding nuclear arsenal as well as chemical, and potentially biological, weapons. The Korean People’s Army also has significant numbers of fixed and mobile surface-to-air missiles and anti-aircraft artillery, which would need to be suppressed during a large-scale conflict.

With this in mind, the Block 2 version of the KF-21 with air-to-ground capability will likely be of particular importance to the ROKAF.

With its KF-21 Boramae, South Korea has taken a different route to field an indigenous new-generation multi-role fighter, rapidly, and the program has made impressive progress so far. The countdown to its first flight is now on.

The Russian and Chinese air forces took part in the second round of joint maneuvers over the tense waters of the Sea of Japan.