Two relatively new sensor-equipped Tu-214ON aircraft need a new mission, which could include watching over the Arctic or military installations. 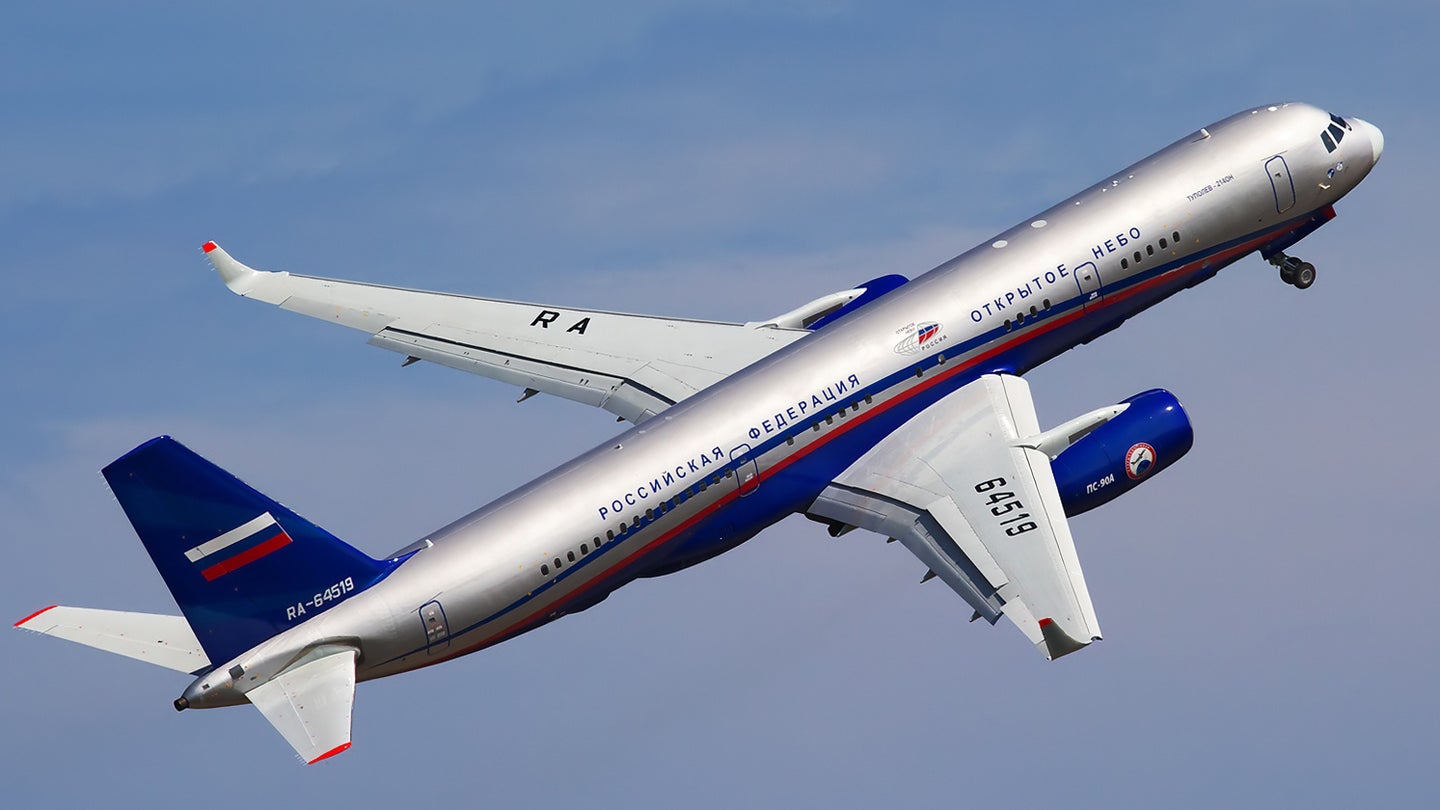 After Russia followed the United States out of the Open Skies Treaty, the former is now offering its specially configured Tupolev Tu-214ON aircraft, which it describes as “the most advanced aircraft” certified to take part in flights under that agreement. The converted airliners, equipped with cameras and other sensors, are being pitched for alternative duties on behalf of the Russian military, or even civilian surveillance tasks.

In a post on its Facebook page yesterday, the state-owned Rostec Corporation, the parent company of the United Aircraft Corporation, which in turn is responsible for Tupolev, posed the question “What is waiting for the unique Tu-214ON aircraft after Russia withdraws from the Treaty on Open Skies?” The post, which you can read in full here, then promoted the capabilities of the soon-to-be-surplus Open Skies surveillance aircraft, the most modern aircraft type used by Russia for this purpose.

According to Rostec, quoting the general designer of the Vega subsidiary, Vladimir Verba, the concern is “ready to retrofit the Tu-214ON with special equipment to solve other tasks.” The corporation suggests that the Tu-214ON could “be used to monitor the security of military facilities of the Russian Federation, objectively control the results of tests of various weapons, and evaluate the effectiveness of exercises.”

Furthermore, Rostec anticipates the aircraft “will also be in demand for such purely civilian tasks as mapping [and] assessing the ice conditions on rivers and in the seas, which can be very important in the framework of the Arctic Program.” That latter point suggests a potential new role for the Tu-214ON in support of Russia’s burgeoning activities in the Far North. Of course, these include a highly strategic military component, as well as securing access to natural resources and maritime trade routes.

The Treaty on Open Skies was originally signed in 1992 but only entered into force in January 2002. Since then, a total of 35 countries have joined. In August 2002, Russia conducted the first observation flight under the treaty. Under the terms of Open Skies, inspection flights are permitted over member states’ territory, provided certain rules are adhered to, including missions being in the presence of monitors from the surveilled country. In this way, countries can collect data on military forces and activities. The treaty limits the resolution of the reconnaissance sensors that can be utilized, and therefore the level of detail of the imagery that’s gathered.

Moscow announced its intention to leave the treaty back in January, the Ministry of Foreign Affairs stating that it had “launched domestic procedures for withdrawal.” While that wording is not necessarily indicative of a complete exit, it’s noteworthy that now Rostec is offering the services of the Tu-214ON in some new capacity, although there is no indication the aircraft are available for sale or lease

Russia’s departure from Open Skies was precipitated by former President Donald Trump’s decision to walk away from the treaty, citing Russian violations of its terms. These included restricting the duration of flights over the Kaliningrad exclave on the Baltic Sea and near the breakaway Georgian regions that Moscow recognizes as independent countries. You can read more about these treaty compliance issues in detail in this past War Zone piece. The Trump administration finally withdrew the United States from the treaty last November.

The Russian Open Skies fleet is based at Chkalovsky northeast of Moscow and, as well as the two Tu-214ONs, it includes four of the smaller An-30B twin-turboprops and one Tu-154M-LK1. The latter aircraft was used for missions over the United States, including one that you can read about here, as was the more capable Tu-214ON.

Unlike the older An-30B and Tu-154M-LK1, which carry only optical cameras, the Tu-214ON was envisaged to utilize every type of sensor that is permitted under the treaty: a side-looking radar (that can work over land and water in most all conditions), an infrared scanner, and a suite of optical and TV cameras. All this equipment was to be integrated by Rostec’s Vega concern before the two aircraft were handed over to the Russian Ministry of Defense in 2013 and 2014. In the event, however, and despite many sources claiming the contrary, the radar was never installed.

Nevertheless, in 2018, the Trump administration briefly refused to certify the aircraft, although this may well have been political intransigence rather than a comment on aircraft capabilities. After all, this happened after Russia had revised the surveillance fit on the planes, abandoning the radar and installing digital cameras with the same resolution as those used on the An-30B and Tu-154M-LK1. According to Rostec, the cameras have a resolution of 30 centimeters, while the infrared sensor has a 50-centimeter resolution.

Should the Tu-214ON remain in Russian military service, it is probable that the original higher-resolution camera would be reinstalled and, potentially, other sensors too. The Russian Ministry of Defense already operates the two Tu-214R Mullet military reconnaissance aircraft based on the same airframe and including equipment that would be prohibited under Open Skies. This includes a side-looking radar with antennas on the forward fuselage sides and below the rear fuselage. Its electro-optical sensor suite includes digital still, infrared, and TV cameras. Finally, a signals intelligence (SIGINT) suite is used to gather radio-frequency traffic which can then be analyzed and transmitted to other platforms via satellite communications. Befitting its military role, the Tu-214R also carries countermeasures dispensers for self-defense. These aircraft have been noted patrolling off the coast of Japan as well as along the border with Ukraine and in Syria.

However, the Tu-214ON would need significant modification to approach the intelligence, surveillance, and reconnaissance (ISR) capabilities of the Tu-214R, not least since it currently lacks any means of real-time data transfer or other specific military systems.

Outside of the intelligence-gathering role, the Tu-214 is also well established with Russian military and government operators. The Rossiya fleet, which provides transport for the president and other high-level state authorities, flies 15 examples. These are fielded in standard transport, airborne control post, radio relay, and combined airliner/command post configurations.

As well as the two Tu-214R and two Tu-214ON aircraft, the Russian Ministry of Defense operates another two airliner/command post variants, while the Federal Security Service, also known by its Russian abbreviation FSB, has a single airborne command post.

Lastly, Tupolev retains a single testbed version of the Tu-214, specially adapted for trials of systems destined for the upgraded Tu-22M3M and Tu-160M bombers.

Adapting the Tu-214ONs to one or more of these existing configurations could be an attractive way of boosting the special missions or VIP transport fleets, especially since the easiest route — converting them to commercial airliners or freighters — is unlikely to result in much interest since series production of the Tu-214 for civilian customers was wound up in 2017 after just 54 examples had been built.

More ambitious would be using the existing airframes as the basis for one or more of the projected developments of the Tu-214 that so far remain unbuilt. These include the Tu-214PP Porubshchik-M escort jammer, Yastreb battlefield airborne command post, Tu-214P Apatit maritime patrol aircraft, and the UTK DA training aircraft for bomber aircrew. The latter type is required to replace the aging fleet of adapted Tu-134s currently used in the role and would likely include mission systems that made it suitable for training crews for the future PAK DA strategic bomber, as well.

With such a unique capability already installed, and the potential to further develop this to support a wide range of military activities, it seems unlikely that the Tu-214ONs will ever leave Russia, although Rostec does, somewhat optimistically, offer the Tu-214ON package for export, stating that it was “ready to produce [these aircraft for other countries as well.” Any foreign interest in aircraft based on the Tu-214 is likely to be severely limited by the fact that the type has only ever been built in small numbers and there are currently few operators outside Russia.

Finally, there is the lingering possibility that Russia might yet return to the Open Skies program. With the statement on withdrawal being fairly vague, there is still room for maneuver. Perhaps Moscow aims to resume flights under the treaty after gaining concessions, whether related to sensor capabilities or flight restrictions in its own airspace.

As for U.S. plans for its own Open Skies future, a return to the treaty looks unlikely under the Biden administration, which said that doing so would send the “wrong message,” according to a memo obtained by Defense News. Meanwhile, the U.S. Air Force has confirmed plans to retire the aging OC-135B aircraft that were used for the treaty flights, with these now expected to be delivered to the boneyard at Davis-Monthan Air Force Base, Arizona, this summer.

Time will tell what happens with Russia and Open Skies but it seems certain that its highly capable Tu-214ON surveillance assets will be busy again, in some capacity, soon.