The new vehicles will offer Army soldiers added mobility and other capabilities while operating in the increasingly strategic Arctic region. 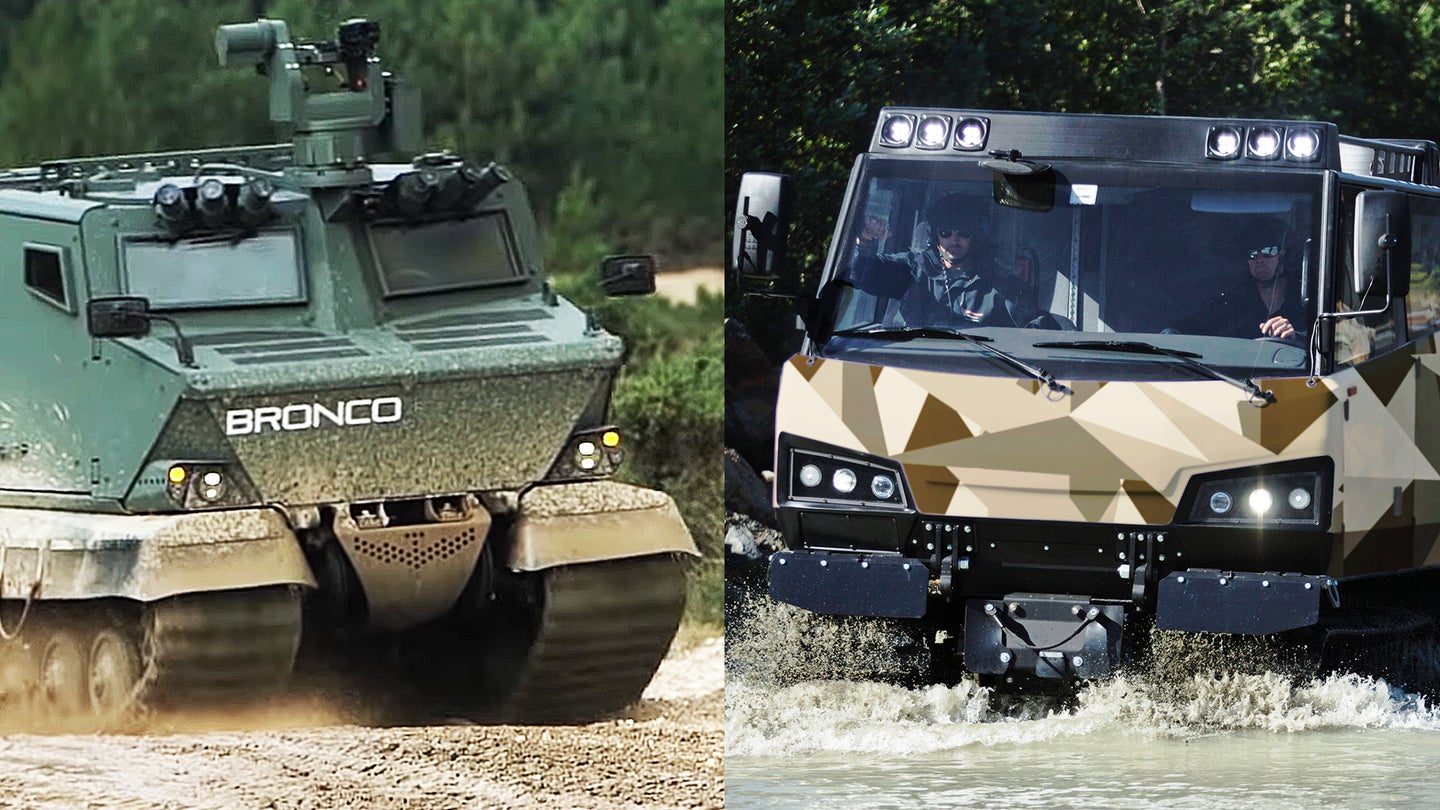 The U.S. Army has chosen two teams, one made up of U.S. company Oshkosh Defense and Singaporean firm ST Engineering, and another involving two divisions of BAE Systems, to compete in the service's Cold Weather All-Terrain Vehicle competition, or CATV. The goal of the CATV program is to acquire new tracked vehicles specifically for operations in and around the increasingly strategic Arctic region to replace the service's aging Cold War-era Small Unit Support Vehicles, or SUSVs.

Oshkosh Defense announced that it, along with ST Engineering, had been selected to provide a version of the latter company's Bronco 3 articulated carrier for the CATV competition, on Apr. 5, 2021. BAE Systems has not yet issued its own press release, but the Army confirmed to Defense News that it is also competing for the CATV contract. The company had submitted its Beowulf design for consideration last year. The Army had first revealed it was looking for a replacement for the SUSVs, which the U.S. Marine Corps also operates, in 2018, as part of a project that was then known as the Joint All Weather All Terrain Support Vehicle (JAASV).

The Army acquired its fleet of SUSVs, which are versions of the Swedish Hägglunds BvS-206D articulated carrier, in the 1980s. These vehicles, which are amphibious, as well as capable of being air-dropped or carried slung underneath a helicopter, have received various upgrades over the years and remain in limited service. However, the design is out of production and they are increasingly difficult to maintain. Tim Goddette, the Army's Program Executive Officer for Combat Support and Combat Service Support vehicle programs told Defense News that they are “no longer sustainable."

"Oshkosh Defense and ST Engineering will deliver two prototypes - one General Purpose and one Cargo vehicle for testing and soldier evaluation" in the third quarter of this fiscal year, which began on Apr. 1, according to a press release from Oshkosh. "The prototypes will be evaluated on payload, mobility, crush resistance, swimming, and transportability."

“Oshkosh Defense and ST Engineering bring together an abundance of defense industry and manufacturing expertise to address the U.S. Army’s need for a proven vehicle that can easily maneuver in arctic environments,” Pat Williams, Vice President and General Manager of U.S. Army and U.S. Marine Corps programs at Oshkosh, added in a statement. “We are confident that the Oshkosh CATV will enable Soldiers to efficiently move personnel and supplies in the most extreme conditions, and we look forward to getting them into the hands of the end user for testing and evaluation.”

The Bronco is an articulated carrier, meaning it consists of a forward and a rear section, linked together by a common, flexible drive chain. A key benefit of this configuration is the ability to better navigate steep inclines compared to more traditional tracked vehicles, since the two halves can move independently, making it easier for them to keep their tracks fully on the ground, as the vehicle moves over the obstacle.

The original Bronco was developed in the 1990s and entered Singaporean military service in 2001. It was followed by the improved Bronco 2 variant and the U.K. armed forces also operated a version known as the Warthog. Thailand is the only other country to operate Bronco type.

The amphibious Bronco 3, unveiled in 2017 and which passed through Arctic testing in 2019, is the latest iteration of the design and is based, in part, on lessons learned from the British experience with the Warthog in Afghanistan. The new carrier has a v-shaped hull, as well as a revised internal configuration, to increase survivability against mines and improvised explosive devices.

It also has a greater payload capacity compared to its predecessors, while still being able to hit speeds of just over 40 miles per hour on improved roads. It has extremely low ground pressure, aided by its rubber-band-type tracks, giving it excellent off-road mobility, including over snow. The track design also offers advantages in maintenance and logistics over traditional metal link-type tracks.

Perhaps most interesting is the Bronco 3's modular design, which allows for the rear section to be rapidly reconfigured for different roles using standardized modules. Beyond the general-purpose troop and cargo-carrying types, ST Engineering already offers a fire-support version armed with a 120mm mortar and computerized fire control system. The vehicle can also be armed with a remote weapon station on top of the front cab that can accommodate various kinds of weapons, giving personnel inside an immediate self-defense option without having to leave the relative safety of the vehicle. In a very cold weather environment, this is even more important, as it means the personnel inside do not have to expose themselves to the elements, either.

Though the BvS-206 series is out of production, Hägglunds, which is now a BAE Systems subsidiary, does still make articulated carriers, with its latest offering being the Beowulf. The BAE actually first publicly revealed this design at the annual National Guard Association of the United States (NGAUS) symposium in 2016.

Beowulf is an improved version of the rubber-tracked BvS10 design and also has a top speed of around 40 miles an hour, as well as a range of 250 miles on a single tank of gas. Interestingly, the British armed forces also operated a version of the BvS10, known as Vikings, and that earlier design is in service with other European military forces. The BvS10, as well as old BvS-206 variants, can be also be configured to carry various heavy weapons, including TOW anti-tank missiles and mortars, as well as remote weapon stations, and it seems very likely that Beowulf will have similar armament options.

BAE has said in the past that this new variant remains air-portable slung under a CH-47F Chinook. UH-60 Black Hawks could also carry the vehicles to a landing zone via sling load, but each one of these helicopters could only one half of one vehicle, which would then have to be reassembled after arriving at its destination. That is something the Army trains to do now with the existing SUSVs. UH-60 transportability, as well as the need for the vehicles to be air-droppable from a C-130-type cargo aircraft, were among the requirements the Army had outlined as part of the initial JAASV effort in 2018.

The Army has told Defense News that it wants to have all of the initial prototypes delivered by June 14 and then plans to send them to the Cold Regions Test Center in Alaska for tests that run from August through December. The service expects to choose a winning design by the end of June 2022.

The CATV program has $6.6 million earmarked for research and development in the 2021 Fiscal Year budget and another $9.25 million set aside to actually begin buying vehicles, according to Defense News. The Army says it plans to buy around 110 examples in the first order and eventually acquire a fleet with at least 163 vehicles, in total.

Oshkosh Defense has said the expected production contract could eventually grow to 200 CATVs. It's not clear whether all of those would be for the Army or if that might include examples to replace the Marine Corps' SUSVs, as well.

Whatever design the Army chooses, in the end, will provide valuable added mobility for units operating in the Arctic, both for routine movements and during combat. While the service only looks interested in acquiring personnel and cargo-carrying variants initially, as already noted, the Bronco 3 and Beowulf have room available to configured for various other kinds of missions. Possible payloads could include mortars or other indirect fire support weapons, or other capabilities, such as electronic warfare suites.

Like the existing SUSVs, the future CATVs could be valuable for other missions in cold weather climates, including humanitarian assistance or disaster relief operations. Various Army National Guard elements maintain small SUSV fleets in part to conduct these kinds of emergency missions domestically in cold weather environments.

Regardless, the Army's intent to purchase new, specialized Arctic vehicles underscores the growing significance of that region to the service, as well as elsewhere across the U.S. military and among America's allies and partners.  Of the $9.25 million the service received to buy CATVs, Defense News reported that $8.25 million of that was added by Congress on top of what the service had initially requested, highlighting the general consensus that there is increasing potential for conflict in the High North.

The U.S. military, as well as others, including near-peer competitors, especially Russia, as well as China, are steadily expanding their abilities to project power in the Arctic. Geopolitical competition in the region is already increasing as global climate change has caused ice to recede, presenting emerging economic opportunities, including newly viable shipping lanes and access to untapped natural resources, including oil reserves.

The new CATVs, dozens of which the Army looks set now to take of in the coming years, will provide important added mobility and other capabilities during any future operations in the Arctic or other cold-weather environments.

With Russia building floating nuclear reactors and possibly testing nuclear-powered cruise missiles, there are good reasons for this training.