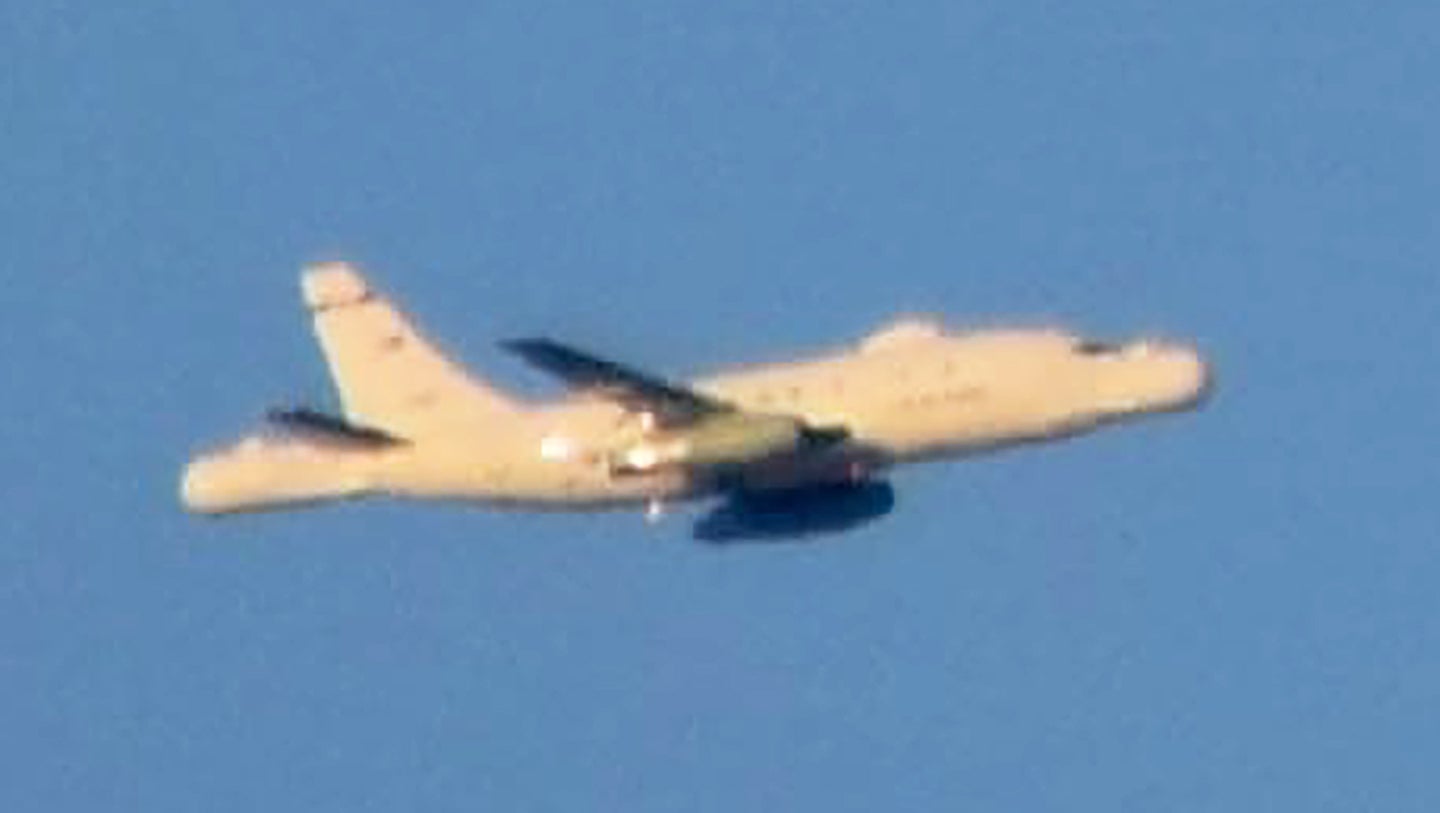 When it comes to shy aircraft that we know exist, the Air Force's wildly modified NT-43A flying signature measurement aircraft, known by its callsign "RAT 55," really takes the cake. The nearly 50-year-old aircraft has no definitive home. It lives at either Area 51 or the Tonopah Test Range Airport and spends its very limited time in the air flying, usually in formation with stealthy aircraft, high over the desolate and sometimes inaccessible ranges that span large swathes of desert in California and Nevada. While online plane trackers have seen data associated with RAT 55 pop up here and there in recent months, nobody had spotted the bizarrely shaped test jet for what seemed like at least a couple of years, that is until now.

I did a full profile on RAT55 six years ago. It definitely caught many people's imaginations. The one-of-a-kind NT-43A is the strangest looking and most secretive Boeing 737 ever created, and that is saying something considering over 10,000 of the type have been built over nearly 60 years, with the airframe being adapted for many purposes.

The aircraft in question's current configuration, which transformed it from a T-43A navigational trainer aircraft into the strange form it is in today, will be celebrating its 20th birthday this year. As for what the aircraft was built to do, here is what I wrote back in 2015:

The NT-43A radar aircraft testbed (probably where the “RAT” callsign comes from) is most likely the last stop in advanced low-signature testing and validation for new stealthy aircraft, new radar-absorbent coatings and heat mitigation technologies, as well as exotic and stealthy structural modifications to existing aircraft. In other words, whether it be a whole new aircraft or just a new radar absorbing material applied to an existing stealthy aircraft, the NT-43A evaluates it under realistic flight conditions with its powerful radars and infrared energy detecting devices. Even repairs and depot-level work on existing stealth aircraft may be validated in flight via the NT-43A.

The NT-43A’s massive radars are most likely able to take incredibly detailed synthetic aperture ‘pictures’ of their target aircraft, as well as collecting sensitive ‘raw’ radar measurements and associated data. Its front and rear pods that give the jet such an ungainly appearance allow it to collect radar and infrared data (the IR sensors sit atop the radar fairings) from every angle around the target aircraft in flight without having to fly at oblique angles towards and away from it. The radar system may have some bistatic capabilities when both front and back arrays are used in conjunction with one another.

Beyond evaluating a design’s low observable qualities in flight, data collected by “RAT 55" is most likely also used to better understand a stealthy aircraft’s strengths and weaknesses. For instance, an aircraft may have very little radar signature head-on, but at certain angles, its radar cross-section grows significantly. Once these intricacies are very well documented, the performance of enemy radars, infrared search and track systems and anti-air missile systems can be better theorized. This allows for a much more accurate understanding of how close a ‘stealth’ aircraft can get to different threats without being detected or without being engaged. Mission planners can then build elaborate routes around known enemy air defense systems and give crews good advice on how to present the best aspect of their aircraft to unplanned ‘pop-up’ threats so that they have the best chance of surviving a mission. This route of lowest possible detection and greatest possible survival is known as the ‘Blue Line’ among stealth aircraft crews...

While similar ground-based signature evaluation capabilities exist, such as the DYCOMS facility at Area 51, they cannot view every aspect of the aircraft being surveilled, and especially from above, where prowling fighters and airborne early warning aircraft represent a real threat. Above all else, think of RAT 55 like a flying lab that comes to its subjects so that they can be evaluated from every angle in their actual operating environment and under real-world conditions. It is a very low-density, high-value asset that serves as another piece in the absolutely massive American weapons development and testing enterprise. While other airborne signature measurement assets exist, RAT 55 is certainly the most elaborate and secretive, and it serves as a critical asset when it comes to maintaining America's dominance in low-observable technologies.

Recent data collected by plane trackers seemed to point to the possibility that the NT-43A RAT55 we have come to know may have been replaced by a less extensively modified aircraft that was using its same or similar callsign. Considering nobody had actually photographed the very noticeable jet during what appeared to be a resurgence in test flights seemed to add to this possibility, but nothing was definitive. The aircraft also hadn't appeared in any satellite imagery of the Tonopah Test Range Airport or Area 51 for some time. Regardless, we now know that the NT-43A RAT 55 is alive and doing what it has always done, in this case trailing a B-2 Spirit of Death Valley gathering signature measurements.

At the same time, another highly peculiar secondhand 737-700, a jet that was outfitted with mysterious conformal sensors and still wore its original green factory coating years after it was delivered, which carries the U.S. civil registration code N712JM, has appeared. It flew a number of test flights off the California coast and around the region last June. While the Air Force's Rapid Capabilities Office appears to be the current 'owner 'of this mysterious aircraft, it turns out that it was briefly owned by Denmar Technical Services. At the time of writing about the green mystery plane, we stated:

The plane's history is also highly puzzling. It was originally delivered to a Wells Fargo Bank trustee, a common way to hide the true ownership of an aircraft and a financial tool often used by aircraft owners, in 2013. It stayed this way until April of 2019, when a relatively obscure company named Denmar Technical Services took ownership of it. The company simply describes itself as "providing our customer with superior radar measurement systems and services" and nothing more on its website. Note, it says customer, not customers. They are based in Reno, Nevada, and have relatively minor activity in terms of disclosed government contracts.

The company owned the aircraft for a short period of time, just one year ago almost to the day, before it was transferred to the USAF. During this time, and a year before it, there was no flight data we could find under its registration until it showed up in Colorado Springs in March of 2020.

The aircraft appears to have been a resident of Sierra Nevada Corporation at Colorado Springs Airport, which is adjacent to a significant Air Force Base that shares its runways, but the mystery 737 wasn't being housed there. SNC is maybe the world's most known aircraft modification company, especially for unique military applications. So, a specially modified 737 is literally right up their alley.

Denmar does very high-end radar and signature test work with the USAF and they were the masterminds behind the original conversion of the NT-43A into RAT55 as we know it today. Other evidence also points to this second-hand, but far newer 737 becoming a successor to RAT55, including indications that it is being developed by an integrated signature testing force, possibly based out of the Tonopah Test Range Airport, in which the USAF's still flying F-117s are directly involved.

The standard version of the T-43A was retired from the USAF over a decade ago and a dwindling handful of 737-200 based airframes are still flying around the globe today. They are becoming increasingly challenging to support. As such, it seems somewhat likely that RAT 55 may be nearing the end of its service life and that a replacement is in the works—the green 737 that flew test missions over California last year. That aircraft has all but disappeared from view, but we know it has spent time at Sierra Nevada Corporation's aircraft modifications facility in Colorado. It is probably there being converted into a new ungainly RAT 55 now, with the flight data pilots collected during its test flights having been used to validate the design of new structures that will turn the literally green 737 into something of a very useful monstrosity like its progenitor. We have to stress that we have no definitive evidence that this is the case, but there seems to be an overwhelming abundance of clues pointing in that direction.

So there you have it, RAT 55 is alive and back plying its trade. For how long we can't be certain, but with the B-21 coming online soon and likely a host of other low observable platforms in the Air Force's not-so-distant future, its replacement could very well be waiting in the wings.

We have some previously unseen RAT 55 pics to share with you from a year ago. These were shot in the Death Valley by photographer Rob Lace: