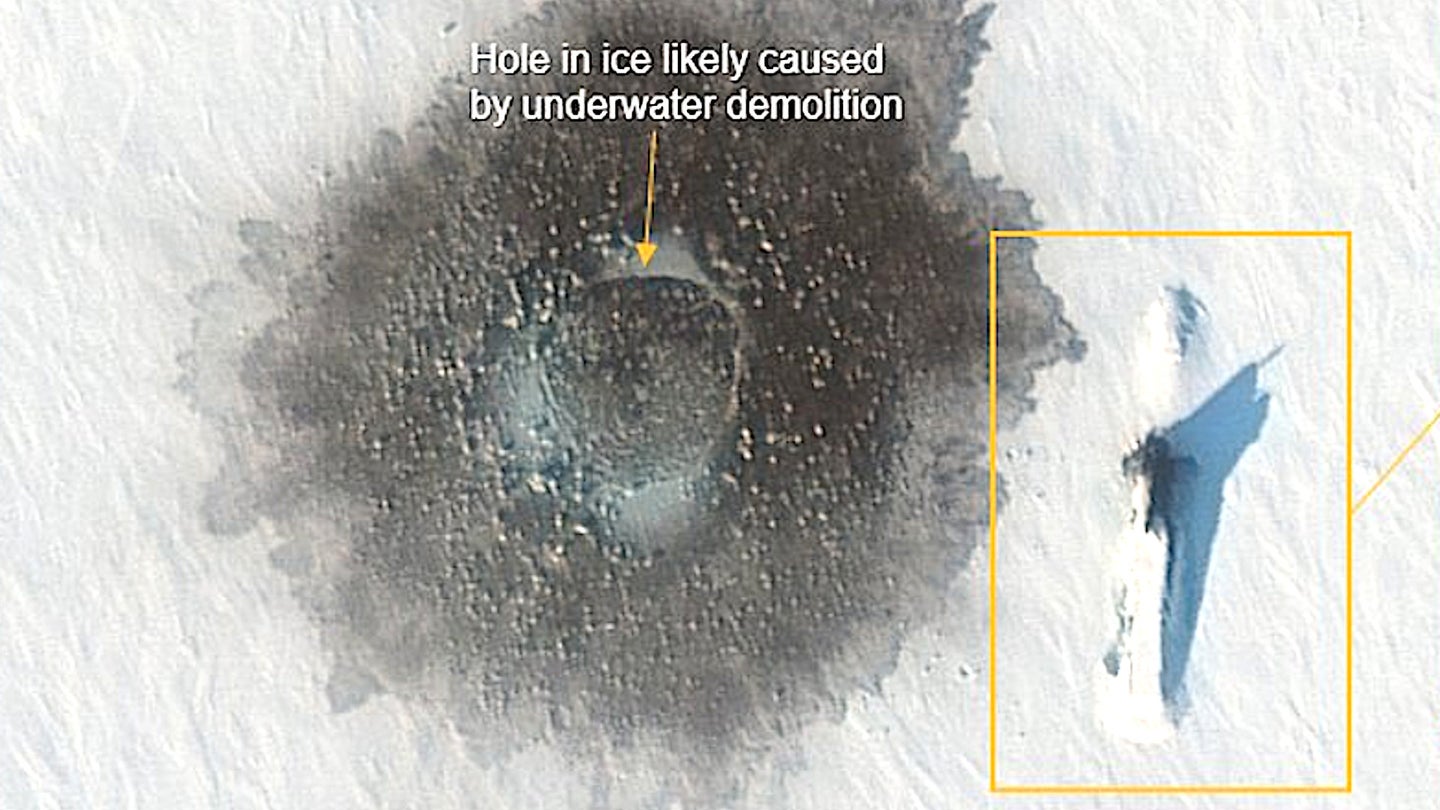 Satellite imagery and space technology firm Maxar Technologies has released a fascinating image of an area where Russian submarines have been conducting drills as part of a larger Arctic exercise. Three submarines notably surfaced through the ice relatively close together last week, something you can read about more in our initial reporting on this drill. The new image shows a large hole blown through the ice, possibly by a torpedo, the purpose of which is unclear, but that might provide an opening for submerged submarines to quickly surface and fire ballistic or other missiles through during a time of war.

On March 29, 2021, Maxar Tweeted out a composite of the satellite image together with a frame from a video that the Russian Ministry of Defense released last week showing the surfacing submarines and other scenes from the Umka-2021 Exercise, which is seen in full below. The image, which is dated March 27 and shows an area of ice south of Russia's Alexandra Land Island, part of the Franz Josef Land archipelago in the Arctic Ocean, only shows one submarine, which the company identified as a Delta IV class ballistic missile type, as well as "hole in ice likely caused by underwater demolition."

A separate Maxar image, the date and location of which are unclear, but which is also from the Umka-2021 exercise area and that shows multiple points where submarines have surfaced through the ice, is also now circulating on social media.

The Russian Ministry of Defense has yet to officially identify the three submarines seen in the video it released or say whether or not those are the only boats taking part in Umka-2021. Based on the official footage, seen below, it appeared that two of the submarines were Delta IV class types, while the third was either a Borei or Borei-A class ballistic missile submarine.

Based on what can be seen of the submarines poking through the ice in the Russian Ministry of Defense's video, as well other data points, H.I. Sutton, an expert on all things that travel underneath the waves, has now written that Knyaz Vladimir, the only example of the advanced Borei-A class submarine presently in Russian Navy service, has been one of the three boats participating in this exercise. Knyaz Vladimir

was only commissioned in June 2020 after years of delays.

In addition, Sutton said that one of the two Delta IVs appears to have been BS-64 Podmoskovye, which was lengthened and otherwise heavily modified as part of a conversion process that turned it into a special mission submarine. It is now capable of acting as a discreet mothership for the Losharik, a midget spy submarine. Losharik reportedly suffered a fire while attached to Podmoskovye in July 2019. You can read more about that incident, which led to the deaths of 14 Russian submariners, and the two submarines themselves, in these past stories.

The Delta IV seen in the Maxar image from March 27 clearly shows the boxy superstructure behind the submarine's sail that contains 16 launch tubes, each of which can be loaded with an R-29RMU Sineva submarine-launched ballistic missile. BS-64 notably lacks this feature.

As to the hole seen next to the submarine in the Maxar image, based on the width of the Delta IV design, it would appear to be around 80 feet wide. As to what created it, that is less clear.

The Russian Ministry of Defense did previously disclose that a hole had been created in the ice as part of Umka-2021 that was related in some way to the firing of at least one torpedo by an unspecified submarine sailing under the ice. "According the [sic; to] the Russian MoD press reports a nuclear submarine used a torpedo to create a hole to surface through," H.I. Sutton wrote.

It's not necessarily clear how such a maneuver would be performed, but it's possible that a torpedo could be fired in an unguided mode at the underside of the ice by angling the submarine upward before launch. A wire-guided torpedo could potentially be manually steered into the ice, as well. Regardless, the hole seen in the Maxar imagery appears uniformly circular, which could have contributed to the company's own assessment that it was the result of more deliberate "underwater demolition." Personnel on top of the ice, or combat divers underneath, could have performed that task.

No matter how the hole was created, it could provide a space for a submarine to surface faster and more safely from beneath the ice to launch ballistic or other kinds of missiles. Otherwise, submarines would have to surface more completely through the ice, and then work to safely open their launch tubes. That is a process that would be slower and that would leave the boat more vulnerable, at least to some degree, even in the remote expanses of the Arctic.

The video below shows a Russian Typhoon class ballistic missile submarine firing an R-39 Rif missile after surfacing fully through the ice in the Arctic. The actual launch is seen at around 3:38 in the runtime.

Ballistic or guided missile submarines would still have to move out from under the ice to launch their weapons without surfacing. In general, the Arctic ice offers valuable protection for submarines that makes it especially difficult for opponents to spot them and track their movements. It is known that the Russians, among others, use the region to shield submarines, especially ballistic missile carrying types, on deterrent patrols, from prying eyes and prowling attack submarines.

Whatever the exact purposes of the hole, it only underscores that the submarine component of Umka-2021 has involved a number of notable tactics, techniques, and procedures, even if certain specific elements have been observed before. For example, Russian, as well as other countries' submarines, especially those of the U.S. Navy, regularly conduct Ice Exercises (ICEX) in which they surface from underneath the Arctic Ice. However, the Russian Navy has already said that this instance involving the surfacing of the three large submarines through the ice together within a relatively small space, described as a circular area less than 2,000 feet in diameter, was a first for the service.

Altogether, Umka-2021 appears to be a significant drill in this increasingly strategic region. The potential for competition and conflict has grown as global climate change has caused ice in the Arctic to recede, presenting access to new economic opportunities, including trade routes and largely untapped sources of natural resources, such as oil. Well before this particular exercise, Russia, among other countries, including the United States, had already been working hard to expand its ability to project military power, on and below the surface, as well as in the air, in the region.

It will be very interesting to see what additional details about the submarine component of Umka-2021, as well as other aspects of this important drill, continue to emerge in the near future.