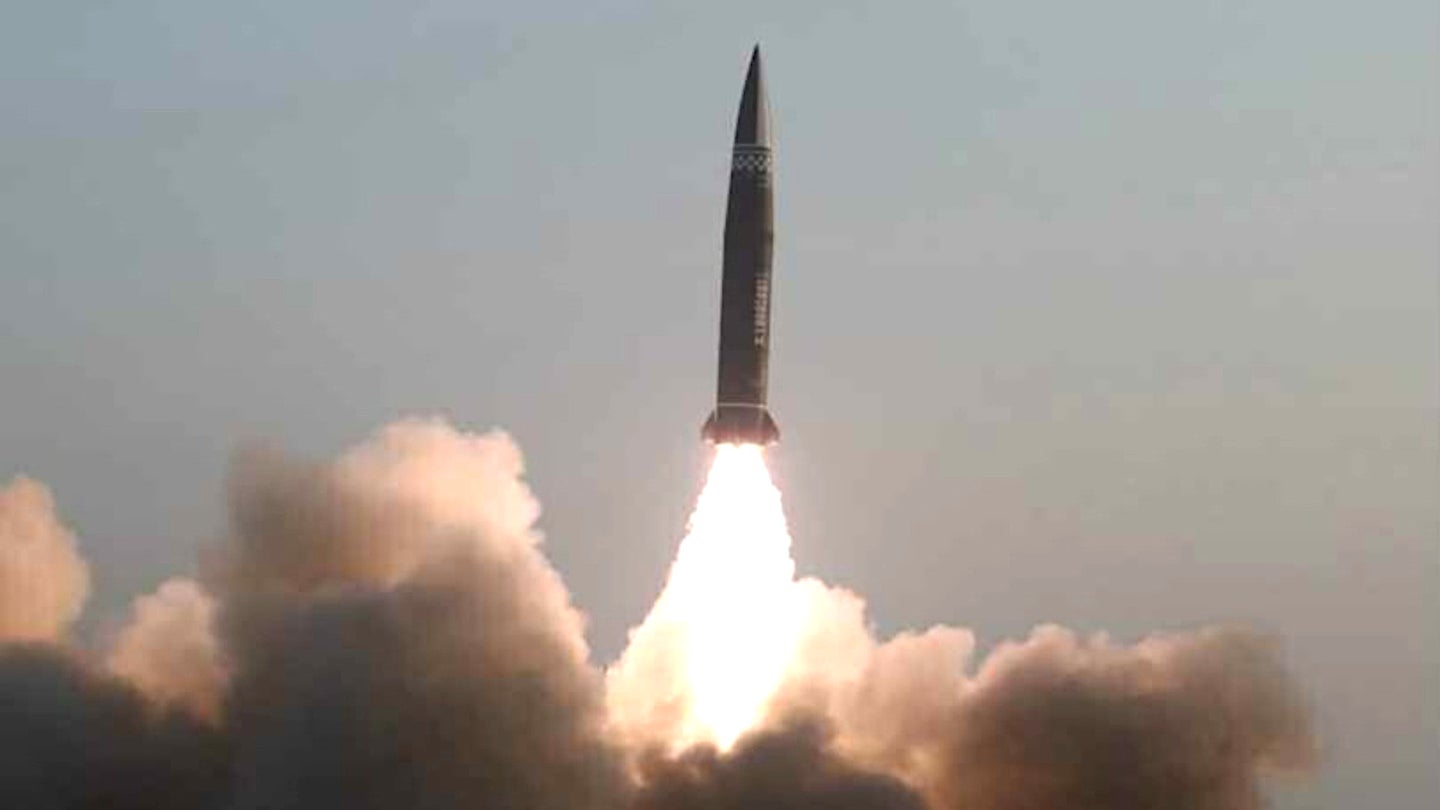 The ballistic missiles that North Korea fired into the Sea of Japan earlier today were of a new type that it had only shown publicly for the first time at a parade in January. This appears to be the first confirmed test of these missiles and the first test of a ballistic missile of any kind that the country has carried out since President Joe Biden took office in the United States earlier this year. An official statement from the regime in Pyongyang said that the weapon can carry a warhead weight up to two and a half tons and was based, in part, on previously developed missile technology.

North Korean state media released the first official details about the launches, as well as pictures, early on what is already March 26 on the Korean Peninsula. Interestingly, Ri Pyong Chol, Vice Chairman of the Central Military Commission, a member of the Presidium of the Political Bureau, and a secretary of the Central Committee of the Workers' Party of Korea, the official name of the North Korean Communist party, "guided" the test, rather than the country's leader, Kim Jong Un.

All of these ranges were in line with what had been seen in previous tests of a missile that North Korea unveiled in 2019 that is at least visually reminiscent of the Russian Iskander-M short-range ballistic missile. The official North Korean nomenclature for that weapon is unknown, but the U.S. government refers to it as the KN-23.

However, the pictures that North Korea released of this latest test show that that the weapon is not the KN-23, but rather appears to be a ballistic missile the country publicly debuted at a military parade in Pyongyang in January. This new weapon, the formal designation of which is unknown, as is the U.S. nomenclature, is notably larger, as evidenced by its 10-wheeled transporter-erector-launcher (TEL). The KN-23 TEL only has eight wheels. The TELs for both weapons each carry two missiles, side-by-side in a rear compartment.

All of this, combined with KCNA's report that this weapon is based on a "projectile that was already developed," would seem to indicate that this new missile is an enlarged derivative of the KN-23.

As for why North Korea, which has an expansive arsenal of longer-range ballistic missile types, including multiple intercontinental ballistic missile designs, developed this missile in the first place, the country's military planning decisions are still influenced heavily by the potential for conflict on the Korean Peninsula with South Korea and its American allies, as well as Japan. Advanced ballistic missiles able to be launched along depressed quasi-ballistic trajectories and then maneuver in flight, capabilities that the Iskander-M reportedly has, for instance, present distinct challenges for opponents. Reports in 2019 raised concerns that existing South Korean air and surface-based radars had failed to spot the first tests of the KN-23 that year.

Russia's Iskander-Ms are also capable of carrying nuclear warheads, which raises the possibility that North Korea may be able to arm these missiles, as well as the smaller KN-23s, in that way, as well. The KN-23 and its larger cousin are both solid-fuel missiles, which are faster to prepare for launch, as well as just generally safer to handle and store, than liquid fuel types. All of this could combine to make this new design particularly difficult to detect and potentially preemptively target during an actual conflict, as well as attempt to intercept after launch.

North Korea's developments in this regard may be further driven by similar work being done in South Korea and the United States. In 2017, reports said that South Korea was seeking to develop its own new ballistic missile capable of carrying a two-ton warhead. Following the collapse of the Intermediate-Range Nuclear Forces Treaty between the United States and Russia in 2019, the U.S. military promptly began developing new ground-launched ballistic, as well as cruise missiles, as well. That agreement had prohibited the fielding of land-based ballistic and cruise missiles with ranges between 310 and 3,100 miles.

When it comes to the decision to test these new missiles now, that seems to be, at least in part, a message meant for President Joe Biden and his administration in the United States. Just last week, Kim Yo Jong, Kim Jong Un's sister and powerful confidant the North Korean leader, warned the U.S. government in what appeared to be Hermit Kingdom's first official public remarks aimed plainly at American officials since Biden took office in January.

“We take this opportunity to warn the new U.S. administration trying hard to give off [gun] powder smell in our land,” Kim Yo Jong said in the statement, which was primarily focused on chastising South Korean authorities over an exercise its military was conducting with the its American counterparts. “If it [the U.S.] wants to sleep in peace for the coming four years, it had better refrain from causing a stink at its first step."

Biden has inherited extremely complex relations with the North Korean regime, which initially engaged with President Donald Trump and his administration on a worryingly hostile level, before entering into an extended period of detente with the United States. This included the first-ever meeting between a U.S. President and North Korean leader and an unprecedented degree of diplomatic engagement between the two countries, including two subsequent summits between Trump and Kim. However, the collapse of the second summit presaged a significant cooling in relations that included Pyongyang's decision to end a self-imposed moratorium on major weapons testing.

Prior to these latest ballistic missile launches, North Korea had fired a number of smaller weapons, believed to be cruise missiles, this past weekend. Cruise missile testing, unlike launching ballistic missiles, is not in violation of any of the various United Nations Security Council resolutions that the regime in Pyongyang is subject to.

"According to the Defense Department, it's business as usual, there's no new wrinkle in what they did," Biden told reporters when questioned afterward about those earlier tests. White House officials also said those launches weren't an impediment to future talks between U.S. and North Korean officials.

U.S. Indo-Pacific Command (INDOPACOM) had issued a statement about the new ballistic missile tests that underscored that the United States sees these launches as more serious. The command said that the North Korean activity "highlights the threat that North Korea's illicit weapons program poses to its neighbors and the international community."

"Let me say that, number one, U.N. Resolution 1718 was violated by those particular missiles that were tested — number one, President Biden also said during a press conference on March 25. "We’re consulting with our allies and partners. And there will be responses — if they choose to escalate, we will respond accordingly."

"But I’m also prepared for some form of diplomacy, but it has to be conditioned upon the end result of denuclearization," he continued. "So that’s what we’re doing right now: consulting with our allies."

It remains to be seen how the Biden administration, in cooperation with allies, especially in South Korea and Japan, may respond more directly to these tests. At the same time, they underscore that, despite years of existing sanctions, North Korea continues to develop new and improved ballistic missile capabilities to challenge its opponents in the region and beyond.