A naval combat drone could be headed to the decks of the U.K.’s two aircraft carriers in the future. Under the recently revealed Project Vixen, the U.K. Royal Navy is studying the potential for adding a large unmanned aerial vehicle that could undertake missions including aerial refueling — like the U.S. Navy’s MQ-25 Stingray — as well as strike, potentially in loyal wingman-type role, networked together with its F-35B Lightning stealth fighters.

Naval Technology was first to report on Project Vixen, which, for the time being, is a conceptual project that won’t necessarily lead directly to hardware. Together with aerial refueling and strike, the study will also examine the use of the fixed-wing carrier-based drone in surveillance and electronic warfare missions.

While Project Vixen may not, itself, lead to an actual carrier-launched drone capability for the Royal Navy, the service is already looking at the options for operating an unmanned aircraft “as a complementary platform” to manned aircraft from the decks of its Queen Elizabeth class carriers, according to Naval Technology. This would indicate that at least one line of effort that could emerge from this initial project is a loyal wingman that would operate alongside the short takeoff and vertical landing (STOVL) F-35B as part of the U.K. carrier air group.

The aspiration to have a large-size unmanned aircraft operate from the decks of the two Queen Elizabeth class ships doesn’t come altogether out of the blue. Last month, a request for information (RFI) for “aircraft launch and recovery equipment” appeared on the U.K. government’s public sector contracts website.

That RFI stated that the U.K. Ministry of Defense is seeking information on the assisted launch and arrested recovery “for a range of air vehicles, which would be suitable to fit a vessel within three to five years.” This is part of the development work for the Future Maritime Aviation Force (FMAF) and, intriguingly, the RFI noted that the launch and recovery equipment could be used for “both crewed and un-crewed air vehicles.”

“The Authority intends to use the responses to this RFI to inform future decision making regarding potential air vehicle choices,” the document stated. Currently, the Queen Elizabeth class carriers do not have catapults for launching aircraft, nor arrester wires for recovering them.

It would make sense that the RFI relates to Project Vixen, at least to some degree, which would clearly benefit from some kind of launch and recovery system to operate from the Royal Navy’s carriers; indeed, depending on weight and other specifications, it might be prerequisite. While the specific ship or ships in mind for the “cat and trap” systems is not mentioned in the RFI, the Queen Elizabeth class carriers are the only realistic option within the timeframe, with the U.K. Ministry of Defense requiring information on “solutions which are sufficiently technically mature to be fitted to a suitable ship from 2023.”

By contrast, the U.S. Navy hopes to reach initial operational capability with its first large-size carrier-capable drone, the MQ-25, in 2024.

The RFI also provides some clues as to what sizes of vehicles may be under consideration as part of Project Vixen. The document specifies an electromagnetic catapult able to launch vehicles up to a maximum weight of 55,000 pounds and arrestor solutions that can recover vehicles at a maximum of 47,000 pounds and a minimum of 11,000 pounds.

The upper limit of 55,000 pounds compares to the F-35B’s maximum takeoff weight of around 60,000 pounds and is greater than the U.S. Navy’s experimental X-47B unmanned aircraft that weighed a little over 44,000 pounds during tests. While the lower limit suggests something substantially smaller than the X-47, the upper limit could point to the Royal Navy looking at plans for operating large-size drones with considerable capacity for fuel, ordnance, or sensor payloads.

As well as developing and procuring the aerial vehicle itself, the various hardware upgrades required for the carriers to operate them, including mastering electromagnetic launch technology, come with a hefty price tag, presuming they are even technically feasible. Then there are the control stations and data links that need to be developed to ensure the drones can be safely and effectively integrated within the carrier air group. The safety point is of particular concern since the British carriers do not have angled flight decks, which are typically required to cope with heavier, jet-powered conventional takeoff and landing aircraft, with a separate runway angled away from the centreline to permit simultaneous launch and recovery and simplifying deck movements. In addition, the Queen Elizabeth class warships are currently outfitted with “ski jump” takeoff ramps for their STOVL F-35Bs and it’s unclear if these would be suitable for catapult launch of drones, too.

Also worth bearing in mind is the fact that the U.K. has looked at switching its carriers to “cat and trap” operations in the past, too, and there are lingering doubts as to whether the decision to stick with STOVL was the right one. The government decided to refit catapults and arrester gear on a single operational carrier and procure F-35C variants to equip it, as part of its 2010 Strategic Defense and Security Review (SDSR). At the time it was noted that the F-35C would offer longer range and carry more weapons than the F-35B — while the F-35B’s weapons bay is sized for 1,000-pound weapons, the F-35C accommodates 2,000-pound weapons. “Crucially, [the move] will allow our carrier to operate in tandem with the US and French navies, and for American and French aircraft to operate from our carrier and vice versa,” the SDSR stated. However, the decision was overturned two years later, on cost grounds. Instead, two STOVL carriers would be put into service.

Project Vixen also parallels the U.K. Royal Air Force’s Team Mosquito project, part of the Lightweight Affordable Novel Combat Aircraft (LANCA) initiative. Naval Technology reports that the Royal Navy and RAF are working together to study potential platforms for Mosquito and Vixen, suggesting that a broadly common drone could eventually be fielded for both land-based and carrier applications.

Back in January, we reported on the U.K.’s plans to have a prototype low-cost combat drone for the RAF flying by 2023, with Spirit AeroSystems now contracted to design and manufacture a prototype of what is formally termed an “uncrewed fighter aircraft.”

Project Mosquito also seeks to develop unmanned aerial vehicles capable of working together semi-autonomously with manned aircraft, which The War Zone discussed in detail last year. Project Mosquito also won’t necessarily lead to an operational combat drone, but a production decision will be made after the technology demonstrator has been tested.

The RAF project is expected to demonstrate how a combat drone could potentially work together with the service’s Eurofighter Typhoons and F-35B Lightnings, as well as the Tempest stealth fighter jet that’s also now under development.

The U.K. Ministry of Defense has said it expects Project Mosquito to “fly at high speed alongside fighter jets” and carry “missiles, surveillance and electronic warfare technology.” The aircraft will be expected to target and shoot down enemy aircraft and “survive against surface-to-air missiles.” All these capabilities are likely to be examined under the naval Project Vixen, too.

Plans call for start flight testing of a full-scale Project Mosquito vehicle by the end of 2023.

Project Mosquito is a significant endeavor in itself and only a few countries have, so far, made serious progress in developing loyal wingman-type combat drones. Introducing those same kinds of capabilities into the carrier aviation environment is trickier still. Notably, even the United States has scaled back its carrier-based drone ambitions, watering down its Unmanned Carrier-Launched Airborne Surveillance and Strike (UCLASS) initiative, and shelving the experimental X-47B, in favor of a refocused aerial tanker drone program, now the MQ-25.

While Project Mosquito and Vixen are set to examine how combat drones can work alongside manned fighters, for the Royal Navy, in particular, a future carrier-based unmanned aerial vehicle has particular resonance. Since the government has so far only committed to buying 48 F-35Bs by 2025, the possibility of a large-size unmanned complement to the Lightning could be very welcome.

The U.K. government’s Integrated Review Command Paper, the concluding part of its two-part defense review, published this week, committed to increasing the F-35B fleet size beyond the 48 already ordered, but didn’t provide any more details on numbers and there is a tacit acknowledgment that the planned 138-aircraft figure has been abandoned.

Yesterday, the First Sea Lord, Admiral Tony Radakin, reportedly said that the U.K. eventually planned to buy “around 60” and potentially “up to around 80” F-35Bs.

There have been repeated warnings that a force of 48 would not allow both carriers to sail with the jets simultaneously, once training and maintenance, and not least all the force’s other frontline commitments, are taken into account.

Speaking to the U.K. Parliament’s Defense Committee last September, Nick Childs, Senior Fellow for Naval Forces and Maritime Security at the International Institute for Strategic Studies, said he considered that 60-70 jets would be reasonable to meet the ambition of 24 jets available for Carrier Strike, taking into account training and other demands.

That, however, is only the Carrier Strike portion of the U.K. F-35B’s remit, not taking into account the various land-based missions that are envisaged for it, too. Even a fleet of around 80 F-35Bs could be stretched to meet all of its commitments with the RAF and Royal Navy. Most importantly, as well as boosting “combat mass,” and boosting capabilities, a carrier-capable loyal wingman drone could also offer significant savings in terms of acquisition and operating costs. Leveraging unmanned technology to increase and enhance combat fleets is something that has been at the center of discussions around LANCA and the Australian Airpower Teaming System (ATS), for example.

So far, Project Vixen is a study only, as is the proposal to configure Royal Navy warships with “cat and trap” systems. Ultimately, the U.K. may decide that a better way of operating drones from its warships is by using vertical takeoff and landing (VTOL) types, paralleling thinking in the U.S. Marine Corps. That service has also been looking to field a new drone, much larger than its existing unmanned aircraft, from the decks of amphibious assault ships. Lockheed Martin Skunk Works, for example, has worked on the Vertical Takeoff and Landing VTOL Advanced Reconnaissance Insertion Organic Unmanned System (VARIOUS), a stealthy combat drone which you can read more about here. With the two services already working closely together on the F-35B, there could be scope for future collaboration in combat drones, too.

Whatever route is taken, expansion of the carrier air group through adding combat drones could bring enormous benefits for both the Royal Navy and Royal Air Force. But there remain many and significant challenges ahead before we see might get to see a British combat drone integrated on the country’s carrier decks. 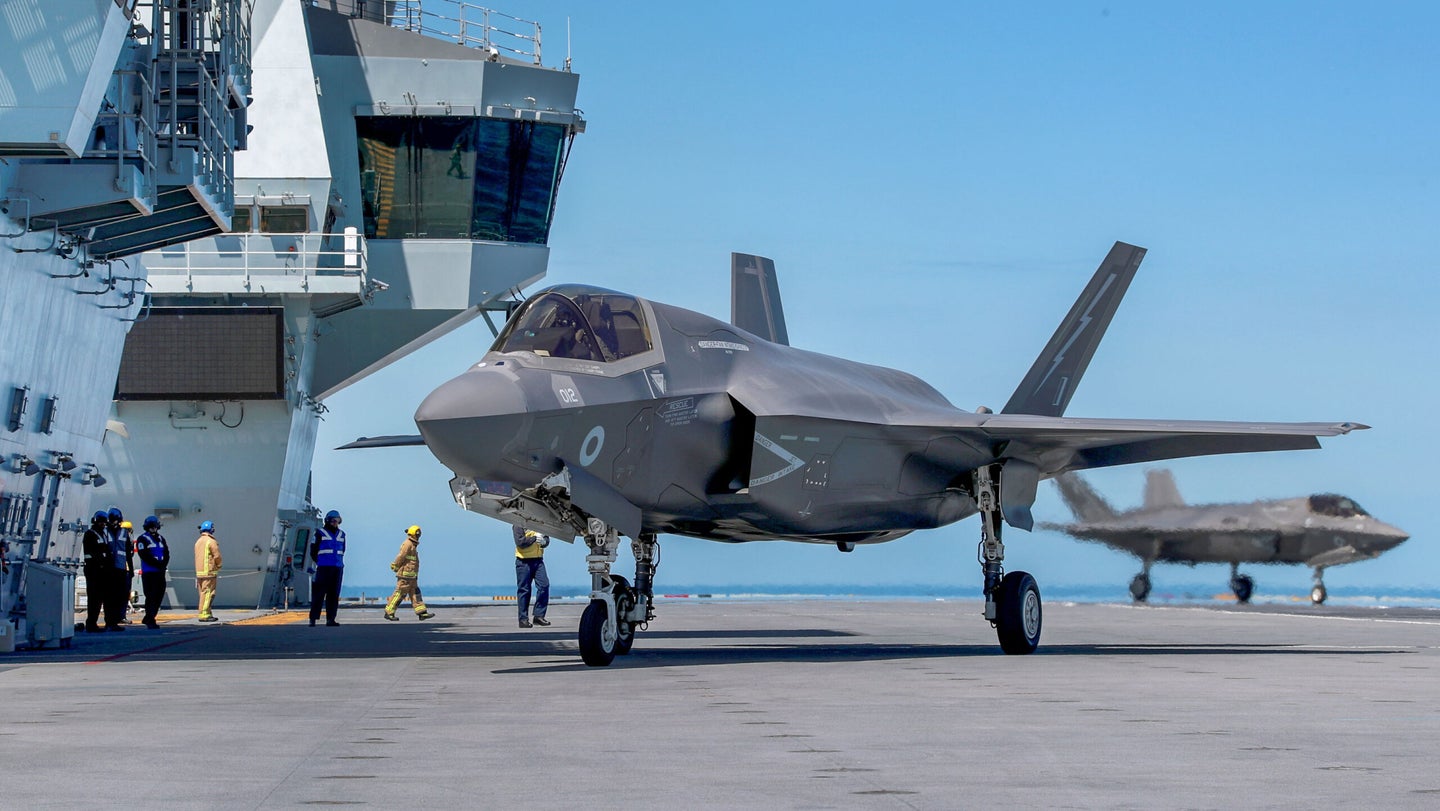 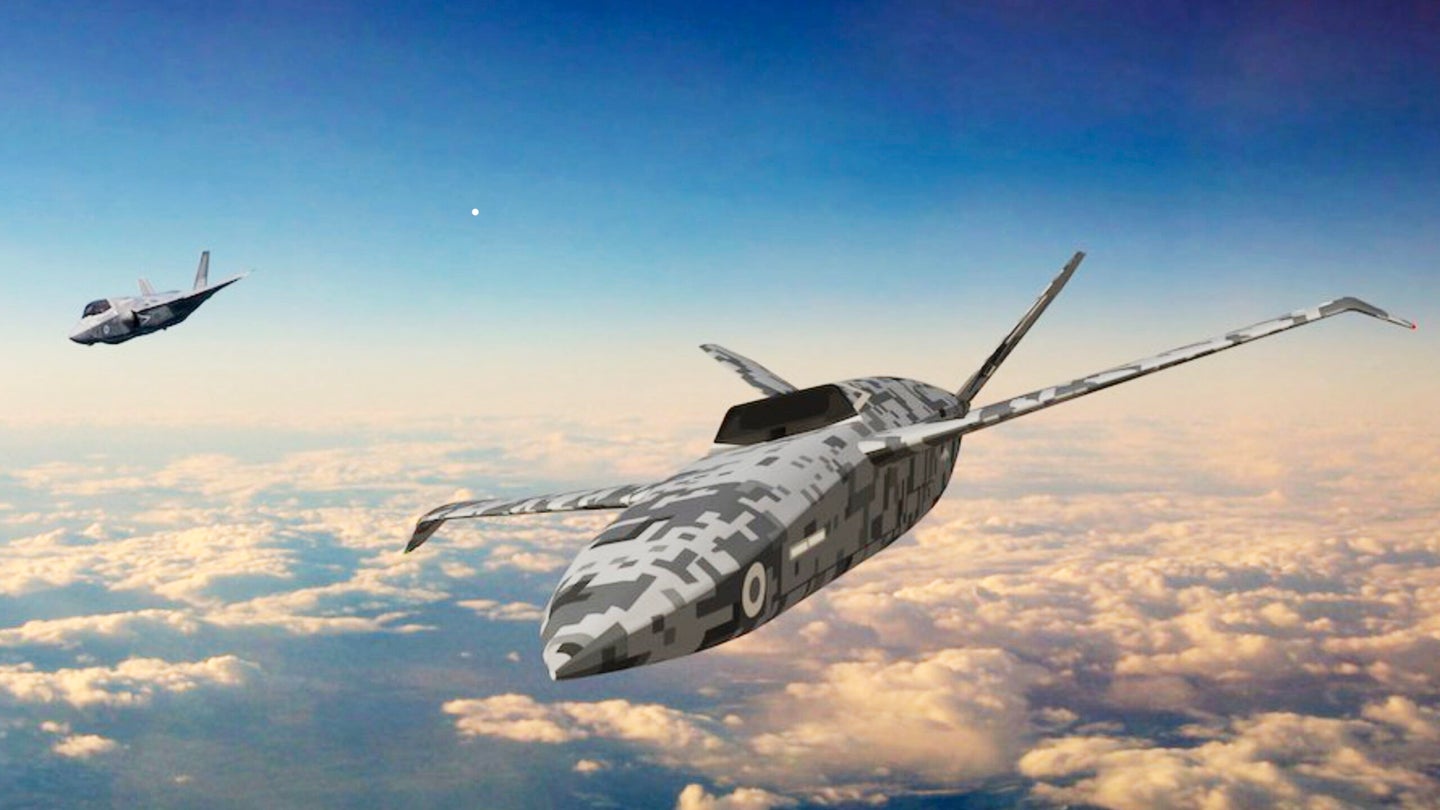 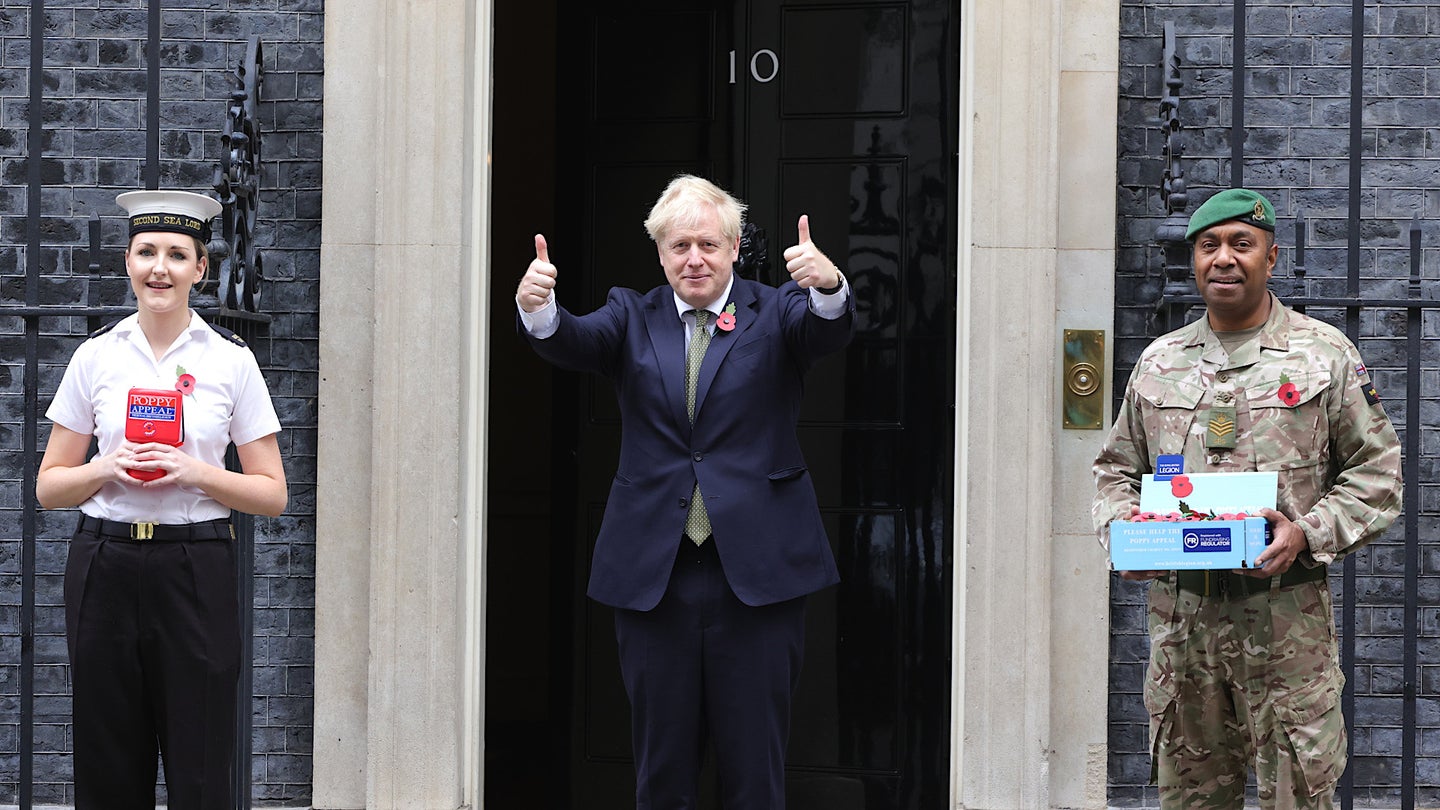