What Is A Diamond DA42 Light Aircraft Doing At Russia’s Airbase In Syria?

Two of the Austrian-designed aircraft have a very special place in Russia’s expansive aircraft inventory. 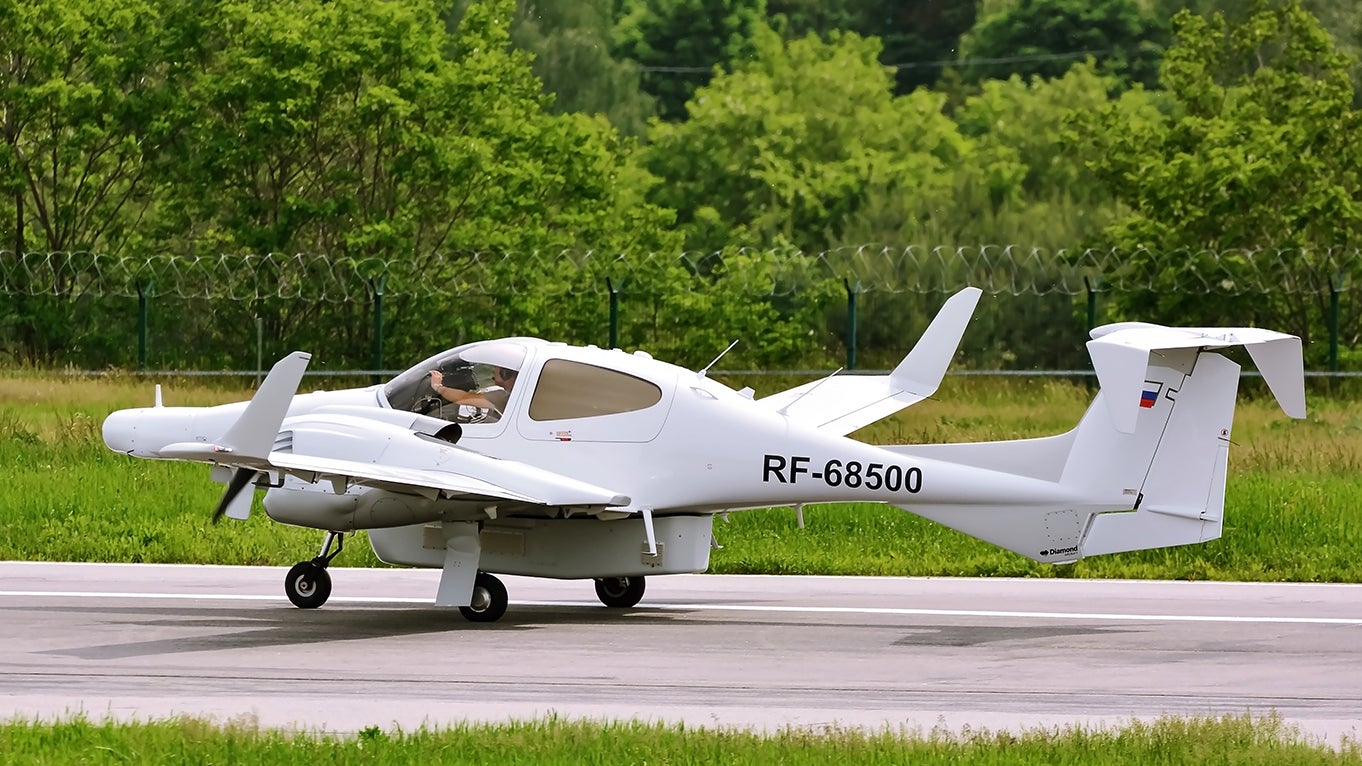 A recent satellite image of the newly expanded Khmeimim Air Base in Syria, the main hub of Russian military aviation activity in that country, revealed an unusual visitor: an example of the Austrian-designed twin-engine Diamond DA42 light aircraft. Beyond being a popular private aircraft and trainer, it has also been adapted into a surveillance aircraft, and its operator is almost certainly Russia’s Federal Security Service, also known by its Russian acronym FSB, but the story of how this organization ended up with these aircraft is an unusual one.

The satellite photo, dated February 26 this year, was brought to our attention by Twitter user Samir. The photo shows the regular complement of Russian Aerospace Forces tactical fighter jets at the base, with examples of the Su-24 Fencer and Su-34 Fullback strike aircraft as well as Su-35 Flanker multirole fighters. A pair of MiG-29SMT Fulcrum fighter jets are also visible, these having returned to Syria after an absence of around three years. Support assets are arranged around the tarmac as well, comprising single examples of the An-72 Coaler and Tu-154 Careless jet transports for conveying personnel both within the country and to and from Russia. Then there is the single DA42, parked alone on an otherwise empty flight line.

The DA42 is powered by Austro Engine’s AE300-E4 diesel engines that can also run on standard jet fuel. The aircraft features a Garmin glass cockpit with twin LCD screens and autopilot and can fly missions of up to 12 hours in duration, with the option of single-pilot operations. Economical to operate, the DA42 has become popular among private fliers, aero clubs, and training academies around the world.

Although little-publicized, Russia has also been using the DA42 for some time now, although it’s not thought to have been previously seen in Syria.

While most Russian DA42s are used for training, rather more secretive are the two DA42M-NG surveillance aircraft operated by the FSB, the successor to the Soviet-era KGB. One of these aircraft, wearing the Russian civil registration RF-68500, can be seen at the top of this story.

Plans to acquire these aircraft were apparently first revealed on the website of Zakupki, Russia’s Public Procurement Institute, in 2016. Costing U$10.2 million, the aircraft were scheduled to be delivered to a base in Stavropolsky Krai by May 2016; this would put the aircraft within reach of the troubled regions of Chechnya and Dagestan. The DA42M-NGs were assembled locally at the Urals Civil Aviation Works (UZGA) in Yekaterinburg.

These particular aircraft appear to be a Russian version similar to Diamond’s own DA42 MPP Guardian, which can be adapted for a variety of missions including border surveillance, reconnaissance, and aerial surveys. This Guardian version of the aircraft features modular payload bays for various electro-optical and infrared cameras, surveillance radars, communications packages, and other systems. A satellite data link allows it to share any of that information with personnel on the ground.

The indigenous mission suite for the Russian aircraft was apparently developed by RTI Aerospace Systems (RTI AKS) and as well as surveillance equipment includes broadband and satellite communications to transmit near-real-time imagery to ground stations.

The two aircraft feature different sensor configurations, with one being optimized for electro-optical surveillance, using a forward-looking infrared (FLIR) turret under the nose. The other aircraft features the BLRK radar system that includes an antenna in a semi-recessed pod below the fuselage and an elongated nose.

There are several options as to what the FSB uses these two aircraft for. Firstly, however, it’s worth taking a closer look at the little-known FSB aircraft fleet, which is significant in itself. The organization, which includes around 230,000 personnel, has a fleet of around 60 fixed-wing aircraft and approximately 130 helicopters. The most important aircraft types are the An-26 and An-72 transports, as well as a range of other transport types and a few trainers. One unusual FSB asset is the armed An-72P border patrol aircraft, a specialist paramilitary aircraft that can be armed with gun and rocket pods.

The primary helicopter type operated is the ubiquitous Mi-8 Hip, but there are also a few heavy-lift Mi-26 Halos, around 10 Mi-24 and Mi-35M Hind assault helicopters, plus smaller utility rotorcraft. Drones and surveillance balloons are also operated.

As Russia’s main security agency, the FSB uses its aircraft for internal and border security, as well as transporting counterintelligence and counter-terrorism units. For example, an FSB aviation unit at Vnukovo near Moscow is specifically tasked with the rapid deployment of personnel from the FSB’s special Vympel and Alfa teams.

While the border guard duties were made separate and became the responsibility of the Federal Border Guard Service (FPS) between 1993 and 2003, they have now been brought back within the FSB remit.

As to what the FSB is using its DA42M-NG aircraft for, as well as for border patrol, they are especially useful for intelligence, surveillance, and reconnaissance (ISR) tasks in scenarios requiring a long times on station while maintaining a low profile. Not only does the DA42 offer very low noise emissions and limited infrared signature, but the appearance of the aircraft itself is also suitably anonymous when operating from civil airports, for example, which could be the case during high-profile events or particular law-enforcement actions.

The FSB, which is charged with protecting the borders of the largest country in the world, regularly operates its aircraft from remote and environmentally hostile locations. The DA42 is a good fit here, as well, with straightforward maintenance requirements and all-weather capability.

On the other hand, the two-aircraft FSB fleet suggests that the DA42M-NGs could be primarily used in a developmental capacity, testing new surveillance and satellite communications capabilities. This would also make sense bearing in mind the two specific configurations that have been identified.

There have also been reports in the past of Russia developing an unmanned version of the DA42, and aviation website Scramble

Other drones, too, may benefit from this possible research, with the Russian military in the process of introducing a number of new unmanned types, ranging from jet-powered combat UAVs to the Predator-style Orion, and the ISR-optimized Altius-U.

Indeed, the Altius-U is a twin-diesel-engine design much like the DA42 and its manufacturer is UZGA in Yekaterinburg. It is intended to fly intelligence missions with an electro-optical and radar payload.

Meanwhile, photos reportedly showing an unmanned—or more likely optionally manned—DA42B circulated back in 2018, including one intriguing image showing the aircraft armed with four 9М120 Ataka anti-tank guided missiles below the fuselage. Reportedly, this photo was published by the Russian government newspaper Rossiyskaya Gazeta and then retracted. UZGA apparently also issued a denial that it had armed the aircraft.

It is uncertain, therefore, whether the image of the armed aircraft showed a manned, unmanned, or even an optionally manned DA42. What is clear is that serious thought has been given to arming the Russian DA42 in the past. It is possible, therefore, that the Syrian deployment involved some kind of weapons trials, too.

Whether the DA42M-NG is being used to test systems and tactics for itself, or for some kind of drone, a deployment to Syria would be a logical development. After all, Russia has conducted limited trials of other new manned and unmanned aircraft in the conflict in that country, including the Su-57 Felon new-generation fighter and as well as weapons tests with the Orion drone. Other Russian weapons have been tested in Syria as well, including ground combat vehicles. The DA42M-NG is only suitable for operations in uncontested airspace but could be used for patrolling regime-held territory around Latakia province, where Khmeimim Air Base is located.

On the other hand, Khmeimim Air Base itself has come under attack in the past, being subjected to a number of drone attacks in late 2017 and early 2018, as well as other types of nefarious behavior. The persistent ISR capabilities of the DA42M-NG could also be ideal for monitoring the areas around the base to prevent infiltration by rebels armed with mortars, rockets, or weaponized drones. With Russia lacking a surveillance drone in the same class as the Predator or Reaper, a manned DA42 variant could be a very useful gap-filler. If the type is unmanned, or if the Russians feel it is worth the risk, the type could venture into ‘hotter’ areas to provide critical overwatch and intelligence gathering capabilities for military operations.

The story of how Russia came to operate the DA42 in the first place dates back to around 2010 when the Russian Ministry of Defense selected it as a twin-engine trainer: the aircraft is used for developing military pilots destined to fly transport aircraft, for example, or other multi-engine types. The DA42NG was chosen as the basis for a new design to be built under license by UZGA as the DA42T.

Reportedly, UZGA received the first Russian Ministry of Defense contract for the DA42T in 2013, together with single-engined Diamond DA40s. The deal came to wider attention only in December 2017, when, during a visit to the UZGA factory, Yuri Borisov, at the time Russia’s Deputy Minister of Defense, announced an order for 35 DA42T aircraft.

By this time, however, it seems that at least the first three DA42Ts had been delivered and the remainder from this order had been handed over by 2019.

While the 35 DA42Ts seem to have been ordered by the Russian Ministry of Defense, the first deliveries were made to the St. Petersburg State University of Civil Aviation located at the city’s Pulkovo Airport.

However, Scramble also reports that additional DA42Ts have since been delivered to the Krasnodar Military Aviation College of Pilots, Russia’s only specialist fixed-wing military aircraft training establishment. These aircraft are based at Balashov, which specializes in multi-engine training, and also operates the An-26 Curl twin-turboprop transport.

Since it seems that the initial agreement for license production would have been concluded before August 1, 2014, the deal would have avoided the European Union arms embargo imposed on Russia in response to Moscow’s involvement in the conflict in Ukraine.

On the other hand, the decision to allocate at least some of these training aircraft to a non-military organization means that they may have been exempt anyway: the sanctions specifically prohibit the supply of arms and services for military use or for military end-users in Russia.

However, preliminary training of aircrew for the Russian military is by no means unusual and dates back to the Soviet era. Nowadays, prior to entering one of the Russian military flying schools, it is desired that the cadets have had previous elementary flight training on light aircraft, with a flying club, for example.

The secretive nature of the FSB means we may well never know for sure what the DA42M-NG was doing during its time in Syria, but it serves as yet another signal that Russia is increasingly willing to test new and potentially innovative technologies in the war-torn country as part of its wider modernization effort. Regardless Syria certainly isn’t where one would think of stumbling upon a DA42.

The twin engine plane came down short of the runway as it made to land at the Kremlin’s Khmeimim Air Base in the country.