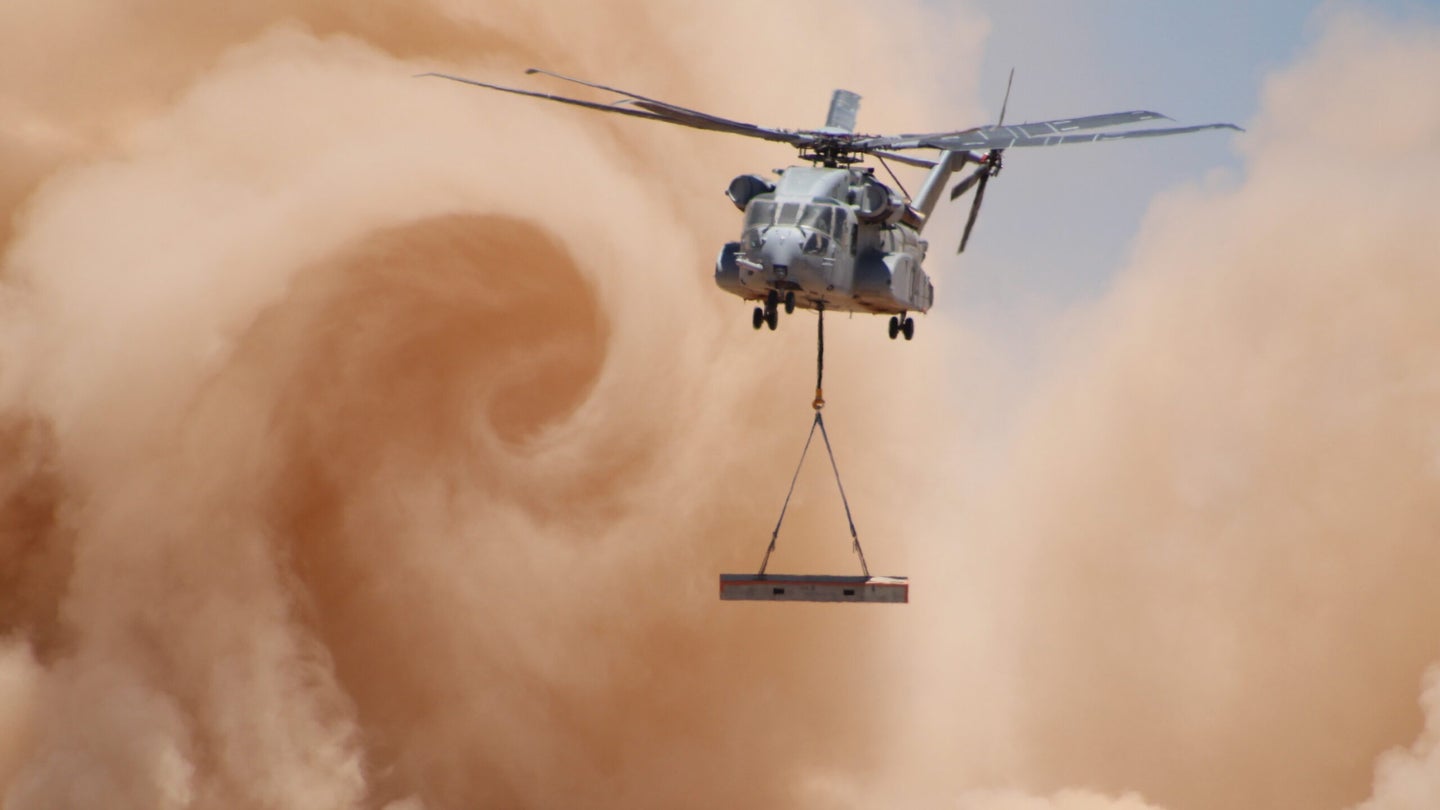 The U.S. Marine Corps is currently significantly limiting the amount of time its new CH-53K King Stallion heavy-lift helicopter can spend flying in dust clouds or so-called brownout conditions of the kind often experienced in sandy and dusty environments. The service is meanwhile taking measures to address concerns about degrading engine performance after 21 minutes of exposure to these conditions across any number of successive sorties, which threatens to seriously impact the helicopter’s planned mission spectrum.

The issues came to light in the most recent annual Director Operational Test and Evaluation (DOT&E) report, which you find in full here, and the U.S. Navy — whose Naval Air Systems Command (NAVAIR) oversees the CH-53K program on behalf of the Marine Corps — has since confirmed to The War Zone that these problems are ongoing.

“The Developmental Test report published on September 10, 2020, indicates engine performance degrades below acceptable minimums after 21 minutes of exposure to brownout conditions,” DOT&E’s report, published in January, stated regarding the CH-53K. “The aircraft’s operating manual limits permissible engine exposure to brownout during a maneuver to 70 seconds.”

Since the CH-53K is billed as the most powerful helicopter in the U.S. Department of Defense’s stable, it will be expected to fly in these conditions both operationally and during training.

Brownout conditions are, by now, a regular feature of military helicopter operations, especially in support of amphibious warfare or special operations, of the kind that the CH-53K will be expected to undertake. The recent campaigns in Afghanistan and the Middle East, in particular, have required helicopter crews to frequently work in these hazardous conditions created when sand or dust particles are swept up in the rotor downwash and obscure the pilot’s vision of the terrain; the same conditions are also found elsewhere, too, including in island environments in the Pacific region. At the same time, there has been a range of technical solutions developed to meet these challenges, including enhanced situational awareness equipment and automatic flight control systems, both of which the CH-53K possesses.

As evidenced in the video below, the CH-53K has previously been tested in reduced visibility landing (RVL) conditions, which are considered an essential capability for the Marines. Indeed, the Marines have stated that the CH-53K’s “most notable attribute is its ability to maintain increased performance margins in a degraded aeronautical environment.” That includes moving slung loads in these conditions, which the DOT&E report states is not currently possible.

Moving external loads is critical to the CH-53K, which cannot carry its maximum load using internal volume alone. In light of the current engine performance problem, it should be noted that picking cargo up and then delivering it will take more than 70 seconds, meaning these maneuvers will not be possible in brownout conditions. If it’s no longer feasible to sling loads in and out of areas where there are brownout concerns, then that will have a major impact on operational planning and it will negate a huge aspect of the CH-53K's capability set.

Moreover, the problem of CH-53K engine performance during brownout conditions could mean that engine performance rapidly degrades below acceptable minimums and the helicopter then needs some sort of maintenance intervention, reducing availability and increasing the burden on spares and servicing. According to the DOT&E report, “extremely frequent engine replacements and repair” will be necessary if the Marine Corps continues to “train and operate in locations where brownout conditions are prevalent.”

With all this in mind, the Navy says it has assembled an “engineering tiger team” to address the problem.

The Navy also told The War Zone that the figure of 21 minutes cited in the DOT&E report is a cumulative one across any number of sorties, but is also “an early engineering estimate that has not been proven or validated at this point.” Although NAVAIR says that it doesn’t know for sure what that total time might eventually be, that average 21-minute exposure stated in the report is especially important considering that an individual helicopter will likely be making multiple trips to and from specific locations during operations.

In the meantime, a risk analysis is ongoing to determine exactly what kind of exposure to brownout conditions the CH-53K can cope with. “The interim time limit to sand/dust exposure has been imposed to provide protection against engine degradation while the tiger team determines the best path forward,” a Navy official said.

“The CH-53K will continue engineering investigation, ground testing and flight test in sand and dust in order to safely expand the operational envelope,” the Navy spokesperson added. “This effort represents a normal progression from developmental flight test to an operational fleet envelope.”

Lockheed Martin, the parent company of the Sikorsky division responsible for the CH-53K, provided The War Zone with the following statement in relation to the current issues:

Sikorsky and our customer continue to operate an integrated test plan and are committed to enter Initial Operational Test & Evaluation as planned in June, support operational deployment and expand production of this all-new heavy-lift helicopter.

The team is already addressing technical issues cited in the report, a majority of which have been resolved, and are confident we have solutions to address the few outstanding issues to enter into IOT&E as scheduled this year.

As regards the particulars of the problems in brownout conditions, the Lockheed Martin spokesperson added: “We understand the sand ingestion issue and, as the aircraft integrator, have assigned a dedicated team of our most experienced engineers to work alongside NAVAIR and General Electric to resolve this issue.”

It is worth noting, too, that the Marine Corps’ MV-22B Osprey tiltrotor has also experienced similar problems in the past, exacerbated by the considerable quantities of dust kicked up when it’s close to the ground. A Department of Defense Inspector General report in 2019 underlined the fact that the service was still struggling to overcome these problems, which had been known about since at least 2010.

The CH-53K’s current engine problem in brownout conditions can be added to a list of concerns that have afflicted the program, which seeks to field a successor to the aging CH-53E, and which has also recently been selected by Israel to replace that country’s legacy CH-53/S-65 fleet. The Marine Corps alone plans to buy 200 examples.

While the Marine Corps took delivery of its first CH-53K in May 2018, NAVAIR admitted the following January that it wasn’t sure when the Marines would be able to declare initial operational capability (IOC) with the new helicopter, due to technical issues. Back then, these included exhaust gasses being sucked back into the engines, problems with the main drive shaft and tail rotor assemblies, and main rotor gearboxes that were failing well before they were supposed to. However, the engine and gearbox issues have since been addressed.

Compounded by these problems through the years, the estimated unit cost of the CH-53K has continued to rise. Already a monumentally expensive helicopter, the Pentagon 2021 Fiscal Year budget request placed its unit cost at around $125 million.

At one point, the Marine Corps expected the CH-53K to achieve initial operational capability in 2015, before that was pushed back until 2019, in part due to the aforementioned gearbox issues. The most recent publicly available Marine Aviation Plan, released in 2019, anticipated the service would reach IOC with the first CH-53K detachment in Fiscal Year 2024.

In the past, the U.S. Congress has even called upon the Pentagon to examine potential alternatives to the CH-53K, including the CH-47 Chinook. Since then, Boeing has begun flight tests of a CH-47 equipped with more powerful General Electric T408 engines that are used in the CH-53K. So far, however, the Marines have remained committed to the CH-53K, which, once fully operational, will offer capabilities well in advance of the existing CH-53E, including lifting almost triple the baseline E-model lift capacity.

While the CH-53K’s current inability to operate for prolonged periods in brownout conditions strikes another blow to a program that has had its fair share of issues, the Navy is confident that “the tiger team will work through the findings, develop a resolution, and see that the fleet receives a reliable heavy-lift platform [the Marines] will use for decades.” It isn't clear at this time how this issue will impact interest from potential export customers, chief among which is Germany.

Only time will tell whether this problem turns out to be simply another hurdle of a comprehensive developmental flight test program, or whether its effects prove to be more far-reaching. However it pans out one thing is certain, the CH-53K is absolutely critical for the USMC. The program cannot fail as the capability it possesses is absolutely essential to the Corps’ mission.

In other words, they need to figure out a way to make it work, one way or another, and they still have a few years to make sure that it does.

Offers for the Boeing CH-47 and Sikorsky CH-53K were both judged too expensive.