The formation included one jet from each of the Navy’s reserve squadrons that belong to the Tactical Support Wing. 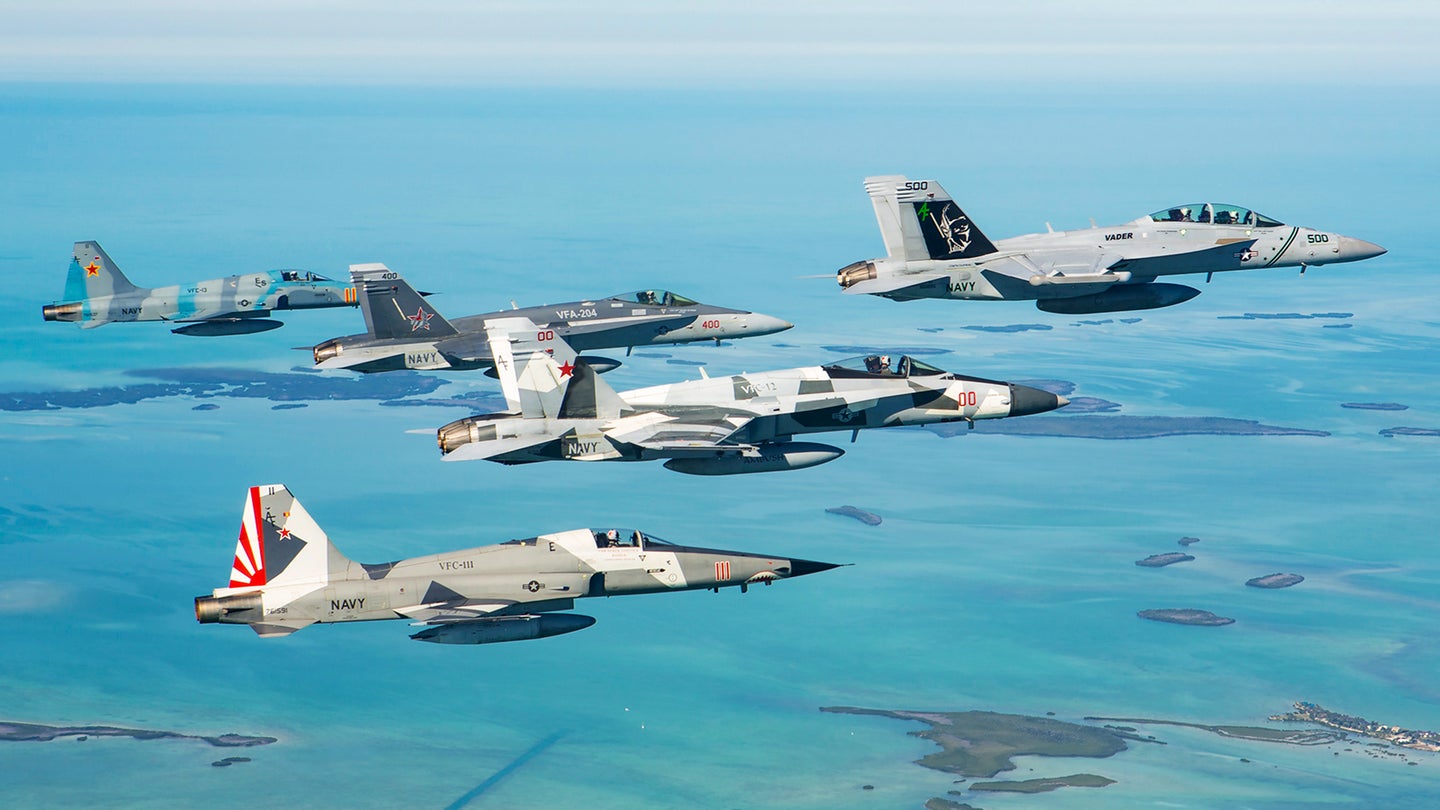 The Navy's Tactical Support Wing is a reserve element, but collectively its five squadrons have among the highest concentration of experienced aircrews in the service. Of the five units, four are primarily tasked with adversary support, flying F-5N/Fs and F/A-18A-D Legacy Hornets (for now), while one is the Navy's sole reserve EA-18G Growler squadron. While they are tied together in terms of command, they are dispersed across the entire country, from Washington State to Nevada to Louisiana to Virginia to Key West. That's why the images in this post are so rare, seeing aircraft examples from each squadron all in one place, and over gorgeous Key West, is truly a treat!

While Fighter Squadron Composite 13 (VFC-13) and VFC-111 will continue to fly the F-5 for the foreseeable future, VFC-12 is transitioning to the Super Hornet, a process you can read all about in these exclusive features of ours. There is also talk that New Orleans-based Strike Fighter Squadron 204 (VFA-204) may be trading in their Legacy Hornets for something else, possibly even F-16s. On the other hand, the Growlers belonging to Electronic Attack Squadron 209 (VAQ-209), the Star Warriors, are very new. However, this unit also went through a huge change in the last decade, relinquishing their EA-6B Prowlers for the EA-18Gs and moving across the country from their prior home at Andrews Air Force Base just outside Washington, D.C., to Naval Air Station (NAS) Whidbey Island in Washington State.

NAS Key West is a mecca for Navy tactical jet crews from across the United States, but especially for those based at NAS Oceana in Virginia. The squadrons take advantage of the vast range complexes right off the coast, the base's laid-back atmosphere and beautiful surroundings, and, above all else, the great flying weather year-round. Visiting units also leverage the services of VFC-111, the Sundowners, who provide adversary air support for fleet aviators and those on their way to a front-line squadron.

You can read more about what it is like serving in one of the reserve units that make up the Tactical Support Wing in this in-depth feature from a VFC-13 aggressor's point of view.

In the meantime, here are some more awesome shots of the formation over the Florida Keys' turquoise waters:

An inside look at how ‘Havoc’ turns U.S. Navy EA-18G crews into wizards of the invisible art of electronic warfare.