Russia wants an armored, mine resistant truck that can be easily airlifted. Apparently, this thing is what they came up with. 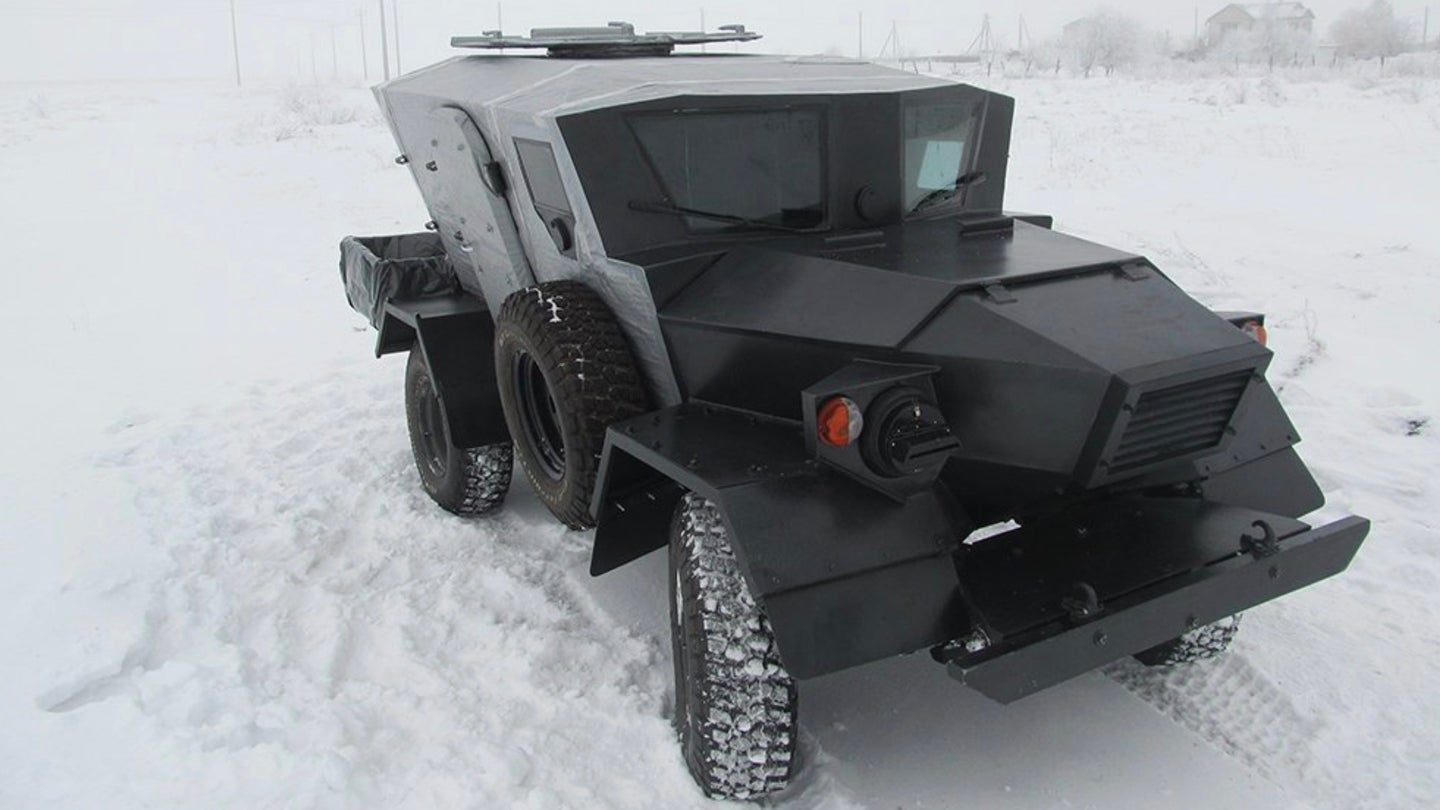 It’s probably no exaggeration to say that we at The War Zone have never seen a military vehicle that looks quite like this one — at least not one from the 21st century. The machine in question is reportedly the Lasok 4-P, which you could quite easily imagine being driven by a low-ranking villain in a Tim Burton movie. However, this plague mask-looking vehicle, according to reports, is envisaged for delivery to frontline units of the Russian military.

The specification that led to this apparent oddity called for a new wheeled armored vehicle that can be transported by air — within the hold of the ubiquitous Mi-8 Hip medium-lift helicopter, in particular the Russian Aerospace Forces’ latest Mi-8AMTSh combat transport variant. That exacting requirement may explain, to some degree, the decidedly odd aesthetic of the resulting product.

Admittedly, the overall black paintwork and snowy backdrop to the photo that we have seen, posted to Twitter by Russian defense policy expert Rob Lee, who tweets as @RALee85, adds to the overall weirdness.

However, the vehicle itself has very little in common with the light tracked vehicles, up-armored all-terrain vehicles, or quad bikes that are otherwise frequently seen being disgorged from military helicopters.

Instead, this vehicle’s design seems to have been driven by the decision to incorporate a V-shaped hull to protect against improvised explosive devices (IEDs) or mines. This likely resulted in the unorthodox angular bodywork. However, the flimsy-looking mudguards, spare wheel mounted on the door, and the shielded blackout headlamps all seem to owe more to a vehicle design from the interwar period between World War I and World War II than what you might see on the modern battlefield.

It is unclear what the vehicle is constructed from, but portions of it at least appear to be covered with some sort of synthetic fabric. These could be a kind of insulation for winter operations of a type that has been seen on some Soviet and Russian vehicles in the past.

To top it all off, the vehicle seems to have some sort of payload bin attached to the back, presumably to carry a modest external load. No visible armament is fitted.

While the vehicle in the photo has been identified as the Lasok 4-P, we don’t know for sure that’s what it is. What we do know about the Lasok 4-P is provided by the website of the Innovatsionnoye Shassi, or Innovative Chassis, company, based in Samara, in southwest Russia.

“In 2020, under the guidance of specialists from the Innovative Chassis Research Center, a prototype of a compact armored vehicle — the Lasok Airmobile Light Armored Vehicle — was proactively assembled,” a press release on the company website reads.

The company says that the four-seat Lasok 4-P prototype is based on a modular layout derived from the Locust armored assault vehicle, or BShM, but incorporates a lighter four-wheel-drive chassis.

What is somewhat perplexing, perhaps, is that an artist’s concept of the Locust depicts a much more conventional vehicle, at least for this type of role. While retaining the V-shaped hull, this artwork suggests a vehicle with considerably greater off-road mobility, thanks to its larger, uncovered wheels, as well as more serious armor protection, and armament in the form of a turret that appears to mount a heavy machine gun. However, it is likely too high, and probably too heavy, to be accommodated in a Mi-8 series helicopter.

Again, it’s explained that the new design for the Lasok 4-P was based around the specific need to be accommodated in the hold of a Mi-8, which can carry loads of approximately 8,800 pounds and, in Mi-8T form, has a height of around 6 feet, length of 17 feet 6 inches, and width of 6 feet 9 inches. As such, the Hip can normally only transport vehicles in the class of the civilian Lada Niva, or the military UAZ-469 jeep, which still needs the top of its roof removed for transit.

“What army units needed is an armored car — all-wheel drive, compact and lightweight, built on the basis of domestic series-produced units.”

The Lasok 4-P is the result. The company says that work on this only began in the second half of 2019 and the rapid development was achieved thanks to “working with partners in an outsourcing system.”

“The appearance of the prototype of the Lasok 4-P armored vehicle is still a commercial secret since the registration of a number of patents for inventions that are directly related to the design and configuration of the hull of the new armored vehicle has not yet been completed,” the firm claims.

Innovatsionnoye Shassi says the design of its Lasok 4-P was informed by “detailed analysis of combat operations in various local conflicts” and that the vehicle is intended for use by special forces, advanced combat and reconnaissance groups, patrolling, and for supporting engineering and assault units, including in mountainous and rugged terrain.

The curb weight of the prototype is said to be 4,500 pounds, including an engine taken from an unnamed series-production vehicle. Gross weight is up to 5,900 pounds, and carrying capacity is approximately 1,400 pounds.

A production version would be expected to see the curb weight trimmed to 4,200 pounds, and carrying capacity increased to 1,700 pounds.

“Due to efficiently rational angles of inclination of the armor surfaces and components of the spaced armor, the total thickness of the elements of the steel armor of the hull does not exceed 4.5mm [0.18 inches],” the company notes. “The thickness of the frontal armor in some areas is 6-8 mm.” The glass is said to be bulletproof and overall, the level of ballistic protection should be Class 4, or, as an option, Class 5. Class 5 would correspond to the GAZ-233036 Tigr used by Russian counter-terrorist units, for example, and also to the NATO STANAG 4569 Level 2 ballistic protection.

“Of course, based on the provision of the required capacity, a given level of mine protection and air-mobility, the Lasok 4-P armored vehicle has a relatively low protection class in terms of ballistic performance,” the company admits. In fact, it says it is inferior to the World War II-era BA-64 light armored car.

While that admission hardly instills confidence, the company also states that: “The special configuration and layout of the armor capsule, among other advantages, also provides the ability to quickly replace the driver in the driver’s seat (for example, in the event of his disability), without leaving the interior of the armored vehicle.” Clearly, air-mobility takes precedence over crew protection.

The manufacturer says that the Lasok 4-P can be modified as an armored command and staff vehicle, for commanders of battalion-level units, for patrol groups, or for communication duties.

A production version should also have armament, in the form of a machine gun, up to 12.7mm in caliber, on a “tower installation” that can retract into the cabin when not in use. A folding armored shield will be provided for the gunner.

Other adaptations are intended to include tire deformation limiters to allow the vehicle to keep running after taking a hit to a tire, and a towed single-axle trailer that can carry another three to five troops. This latter would allow a complete infantry squad to be moved by a single Lasok 4-P.

Looking further ahead, there are also plans for a “super-light combat amphibian” version as well as the addition of remote-controlled weapons stations. Last but not least, the company plans to develop counter-drone versions of the vehicle, which would be equipped with electronic countermeasures to disrupt the guidance systems used by unmanned aerial vehicles.

Of course, we don’t know with absolute certainty that this vehicle seen in the snow really is the Lasok 4-P. If it is as reported, we probably shouldn’t write it off too soon, based on looks alone. If the 1900s-looking armored buggy is eventually issued in quantity, it could yet enhance the capabilities of Russia’s air assault forces.

If you have any additional info on this vehicle, please reach out to the author at the email below!