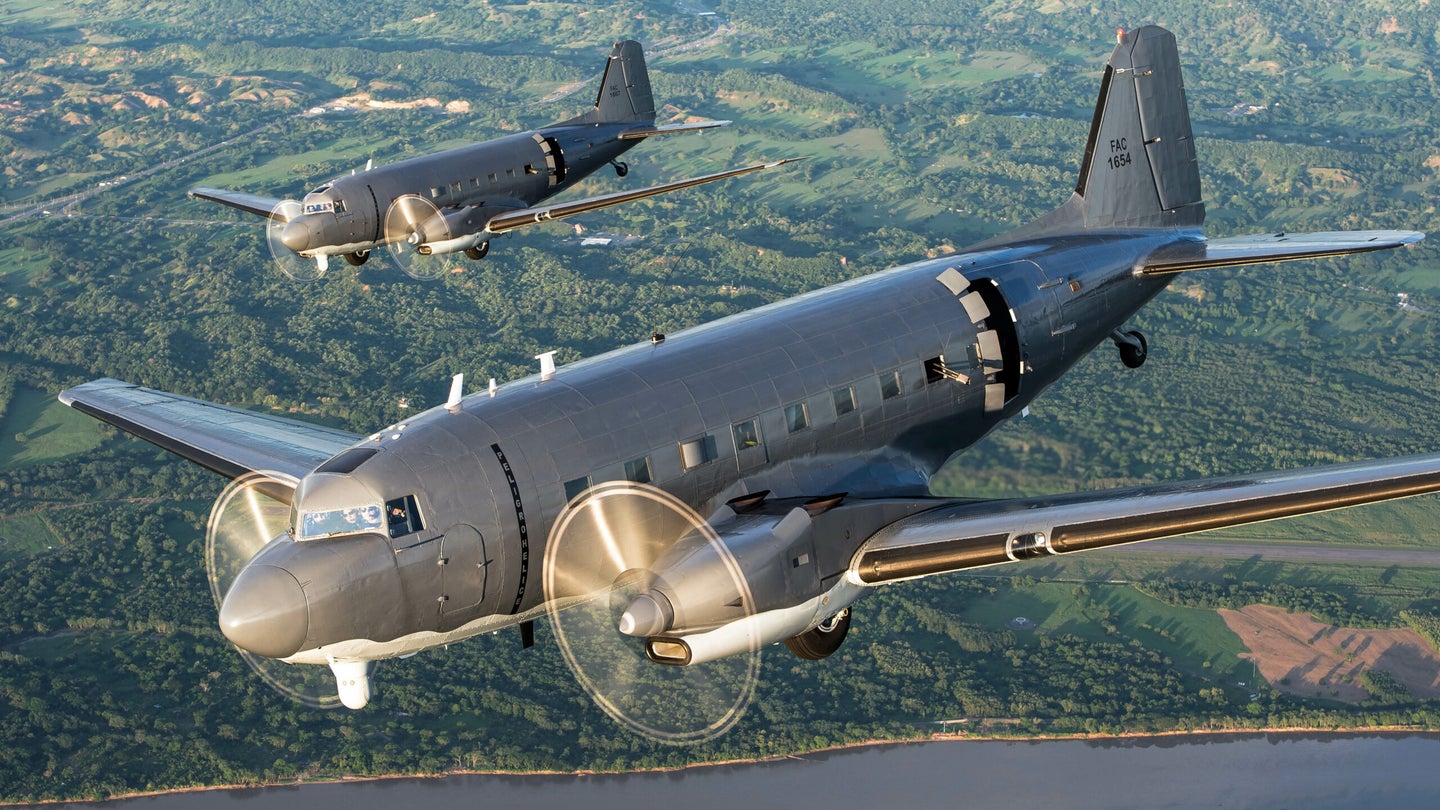 The AC-47 Spooky gunship, the forerunner of today’s AC-130s, which first went to war over Vietnam in the mid-1960s, is still in frontline service with just a single air arm. Based on the venerable World War II-era C-47 transport, the AC-47, which was dubbed “Puff the Magic Dragon” during its operations in Southeast Asia, survives now, albeit in a significantly upgraded form, only over the jungles of South America, in the hands of the Colombian Air Force. These aircraft, named Fantasmas, or ghosts in Spanish, still pack a punch, even though some of the airframes were originally built more than 60 years ago — indeed, one of them is even a veteran of the D-Day invasion.

The Colombian Air Force currently has around six AC-47T Fantasma gunships in its inventory, although not all of these are active at any one time. They are flown by a single unit, based at Palanquero Air Base in the heart of the country, although in the past they have also been deployed at other airfields depending on operational requirements. The upgraded AC-47T version was first introduced in 1994, replacing the original AC-47 that had been converted as a gunship from the mid-1980s.

Colombia’s Fantasmas entered service more than two decades after the U.S. Air Force’s very first AC-47 gunships arrived at Tan Son Nhut Air Base in what was then South Vietnam in late 1965. These aircraft were equipped with three rapid-firing 7.62mm Miniguns firing through windows along the port side of the cabin. Once there, these aircraft quickly began to prove out the fixed-wing gunship concept. Before long, the AC-47s were supplanted by more capable AC-130 and AC-119 gunships, which packed heavier armament, as well as improved sensors and defensive capabilities. Today, the U.S. Air Force continues to operate highly-modified AC-130W Stinger II and AC-130J Ghostrider gunships.

A handful of operators in Southeast Asia, Latin America, and Africa continued to fly AC-47s in various configurations even after the type had been completely phased out of U.S. Air Force service. The last of these aircraft that remain active today is the Fantasma of the Colombian Air Force’s Escuadrón de Combate Táctico 113 — or 113th Tactical Combat Squadron.

Colombia’s history with the AC-47 dates back to the mid-1980s when the country was waging an internal counterinsurgency campaign against guerrillas, chiefly the Fuerzas Armadas Revolucionarias de Colombia, or FARC. To provide additional, more flexible firepower to take on these threats, the Colombian Air Force turned to its surviving C-47 transports. Dozens of these aircraft, variants of the DC-3 airliner, had been delivered to the country beginning in the 1940s and they remained highly prized, above all, for their ability to operate from poorly prepared jungle airstrips.

The video below shows DC-3s, which remain in service with airlines and charter services in Colombia, taking off and landing from an austere airstrip of the kind found in many parts of the country.

Beginning in 1987, some of the C-47s were converted to gunships, inspired by the Vietnam-era AC-47. With support from the United States, these aircraft were fitted with three 0.5-inch caliber Browning machine guns, plus additional navigation and communications equipment. The configuration with three .50-caliber weapons was specifically developed for U.S. Air Force units based in Latin America in the 1960s and came about due to the perpetual shortage of the Miniguns used on the Spooky in Southeast Asia. It then quickly became one of the more popular configurations for foreign users in both Southeast Asia and Latin America.

Since the Colombian AC-47 aircraft have always operated almost exclusively at night, they were also fitted with flare launchers to illuminate the battlefield. While flares were necessary during the days before night-vision equipment became available, they had the disadvantage of revealing the aircraft’s position to the enemy below. Meanwhile, the pilot’s window was equipped with a sight borrowed from a Lockheed T-33 jet trainer to help aim the weapons. Five aircraft were originally modified in this way, but one was lost in an accident in 1988.

Despite the promise showed by the AC-47s in Colombia’s counterinsurgency campaigns, the aircraft was dogged by its veteran Pratt & Whitney Twin Wasp radial engines. These struggled in high-altitude environments and, during intensive operations, engine failures became more commonplace. The aging AC-47s were then provided with a new lease of life, once the U.S. firm Basler offered its BT-67 conversion. This involved swapping out the old radial engines for Pratty & Whitney PT6A-67R turboprops, each rated at over 1,400 horsepower, driving new five-bladed Hartzell propellers. At the same time, the forward fuselage was lengthened by just over three feet, moving the pilots forward of the propellers and preserving the center of gravity.

As well as the fuselage stretch and the new engines, these aircraft were fitted with a Star SAFIRE forward-looking infrared (FLIR) turret below the nose, meaning the illumination flares no longer needed to be used. Additional communications equipment was provided, to maintain contact with ground forces, as well as for communications within the aircraft.

The first three aircraft sent for conversion arrived at Basler facility in Wisconsin in 1993 and a total of nine aircraft were eventually modified to the AC-47T standard. Three have since been lost in accidents.

The aircraft are typically flown by two pilots, a navigator (also responsible for operating the FLIR and communications), a mechanic, and three armorers responsible for the guns. Since 1997, the crews have also been provided with night-vision goggles.

For anti-guerrilla missions, the AC-47T can also serve as an airborne forward air controller (FAC-A) or airborne command post, with the navigator coordinating the operation below. With an endurance of up to 10 hours, the Fantasma is ideal for this role. In some anti-FARC missions, as many as 40 aircraft have been involved — including Kfir fighter jets and A-37 Dragonfly and A-29B Super Tucano light attack aircraft, as well as various helicopters — all directed by a Fantasma in the command post role.

The aircraft’s firepower has also been given a boost, with the single-barrel Brownings having been replaced by three-barreled .50-caliber GAU-19/A Gatling-type machine guns. These guns offer a more rapid rate of fire and don’t suffer from overheating issues that plagued the Brownings. As an option, one of the GAU-19A/s can be replaced with a French-made 20mm-caliber GIAT M621 cannon, used to defeat hardened targets.

Since the guns are fixed, aiming them relies on the pilot’s careful control inputs. One of the pilots of the Fantasma squadron explained this in more detail in an interview with Combat Aircraft Monthly magazine:

The wind, speed, height, and banking all affect the trajectory of fire. With each burst, you adjust the aiming. When I fly I watch the sight, the ground, and my screen to see what the navigator is watching on the FLIR. The key is to work well between the navigator and the pilot. A good navigator must have the capacity to identify the guerrillas; they hide in the trees, walk like animals — they have tactics. The FLIR has a laser and I only have to aim where the laser is. The navigator gives me the azimuth. By day it’s more difficult; I can’t see the laser and it’s more difficult to see the light of the sight.

Other improvements have also been made to the Fantasma, including chaff and flare dispensers to defeat the guerillas’ shoulder-launched surface-to-air missiles, also known as man-portable air defense systems, or MANPADS. The FLIR turret has been updated, with a BRITE Star II offering improved definition, and the communications suite now includes satellite communications and GPS.

Exactly how many of the AC-47Ts remain active in Colombia is unclear. As of 2014, six were reportedly in service. By 2020, three were confirmed as being active — one of these airframes is a former British Royal Air Force aircraft dating back to the 1940s. Another is a D-Day veteran that flew over Normandy in 1944 with the U.S. Army Air Force. However, the aircraft, in general, are fairly easy to maintain and non-airworthy aircraft could potentially be returned to service. Spares are not a particular problem, either, as Colombia is also home to a significant fleet of C-47s in commercial service.

Age, perhaps, is not the biggest concern for the future of the Fantasma. Since the historic 2016 peace agreement between the Colombian government and FARC brought an end to more than 50 years of conflict, the Air Force has no longer faced the same level of threat from what was perhaps the most powerful guerrilla group in the continent. Similar peace deals have been negotiated with other rebel groups, too, including Quintin Lamé, the M-19, and the Ejercito Popular de Liberación, or EPL.

However, the peace deal with FARC proved to be fairly fragile and attacks on civilians, as well as assassinations of local leaders and former guerrillas, continued. Since Colombian President Ivan Duque took office in 2018, the situation has only worsened, with rural areas, in particular, seeing increases in violence. Meanwhile, another leftist guerrilla group, the Ejército de Liberación Nacional, or ELN, remains active, and only yesterday the group denied that it was planning a possible attack in Bogota, the Colombian capital.

In addition, Colombia continues to grapple with smaller groups primarily linked to drug trafficking, as well as illegal mining, and a counterinsurgency capability remains a priority. The years of experience gained in successful operations with the AC-47T likely means that the Air Force will continue to fly these firebreathing antiques for the foreseeable future.