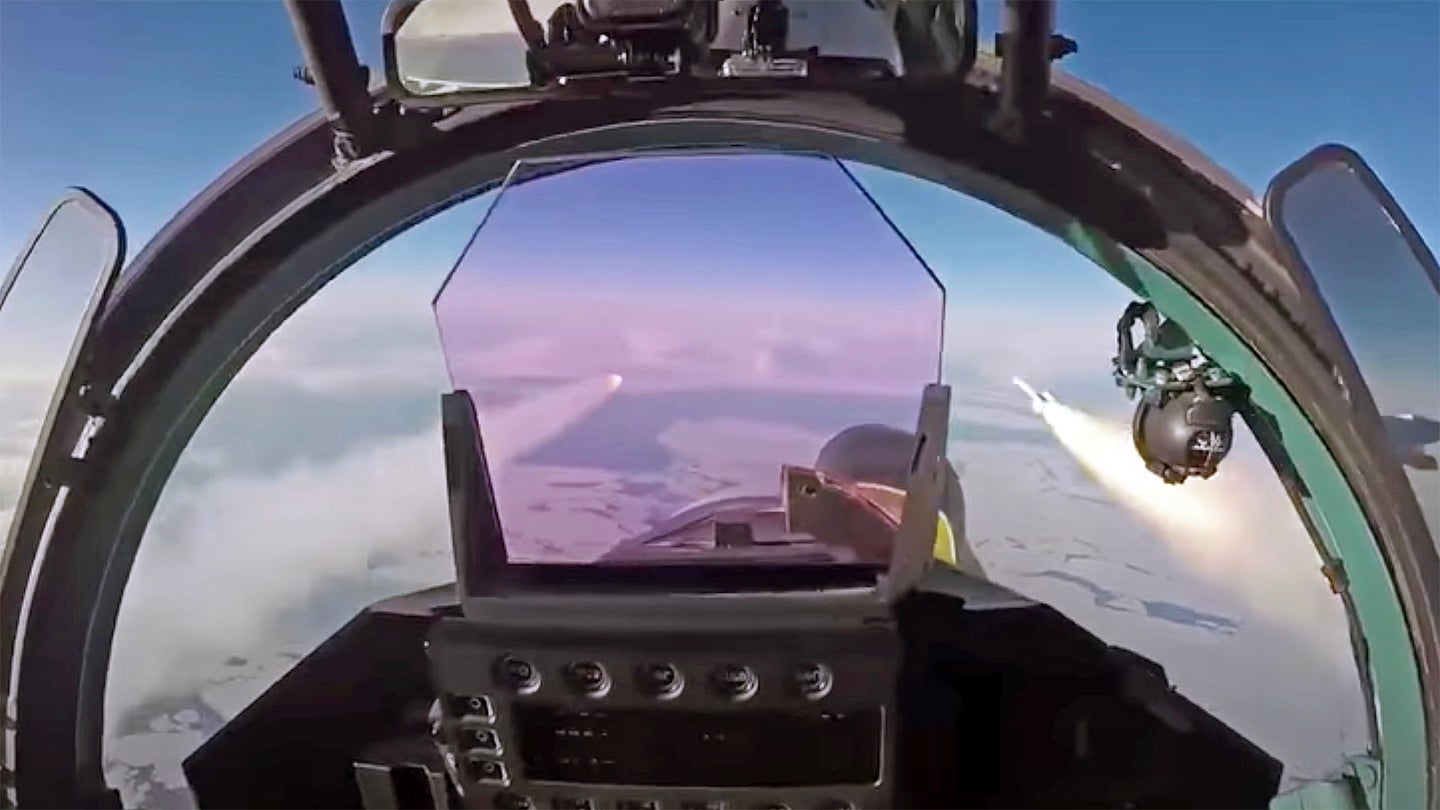 The leading developer of air-to-air missiles in Russia has revealed that it is working on what seems to be a new short-range air-to-air missile type. This weapon would appear to be related to a previous design that would have provided performance at least equal to that of the American AIM-9X Sidewinder or the European Advanced Short-Range Air-to-Air Missile, or ASRAAM.

The revelation appeared in a recent edition of the in-house magazine of the Vympel missile design bureau. This Moscow-based firm is responsible for designing almost all of Russia’s air-to-air missiles, from short-range to long-range designs, and is a part of the country’s Tactical Missiles Corporation (KTRV). The same article which looks back on the company’s achievements in 2020, was republished yesterday on the website of the Center for Analysis of Strategy and Technologies (CAST), a Moscow-based defense industry and arms trade think tank. In this corporate publication, Vympel confirmed that it’s carrying out research and development work on a project named Izdeliye 300M — izdeliye, meaning “article” in Russian, is a prefix applied to most in-development Russian missile programs, while the M suffix denotes a design that’s been “modernized.”

“This year, a range of scientific research and design work was undertaken within the future development foundation with the aim of creating a scientific-technical section for future innovations within the State Arms Order, and also boosting the export potential of the articles delivered by the company,” the article states. “The new work in the future development foundation includes the creation of an outline for the future Izdeliye 300M, research on ballistic characteristics of articles with combined engine [propulsion] installations, and also experimental evaluation of the effect of changes in antenna arrays on the main characteristics of radar seeker heads.” It should be noted that those three items are understood to be three different programs, with the propulsion and radar seeker parts of the work not being related to the Izdeliye 300M.

The article also notes that Vympel has been working on these projects with “various industry scientific-research organizations,” as well as the Moscow-based Bauman State Technical University, which is described as Russia’s oldest and largest technical university.

While the Izdeliye 300M designation seems to be new, it clearly suggests a continuation of an earlier advanced short-range air-to-air missile program, the Izdeliye 300. This latter emerged at least as long ago as the 1990s and was alternatively known as the Vympel K-30. It was intended to supersede the Vympel R-73, known in the West as the AA-11 Archer.

When the R-73 first entered Soviet Air Force service, in 1983, it soon established itself as a very capable short-range air-to-air missile. Its combination of an all-aspect infrared seeker, high off-boresight capability, thrust-vectoring controls, and the fact it could be cued by the pilot’s helmet-mounted sight made it an immediate threat and ensured it would be an influential design. Even after the fall of the Soviet Union, many thousands of R-73s were manufactured, almost exclusively for export, including for China and India. The missile has seen combat in the hands of various export operators and a Russian MiG-29 Fulcrum used the weapon to down one of Georgia’s Israeli-made Hermes 450 drones over Abkhazia in March 2008.

However, the Russian military has long sought a successor to the R-73, the advantage of which has long since been eroded by the appearance of the AIM-9X Sidewinder from American defense contractor Raytheon, European missile consortium MBDA’s ASRAAM, and others.

A follow-on to the R-73 finally appeared in the shape of the Vympel R-74M, development of which began in the mid-1980s, but which did not officially enter service until 2012. Looking almost identical to the R-73, the R-74M is distinguished by its new two-band infrared seeker. This results in increased seeker range and an expanded off-boresight capability, reducing the possibility of the enemy aircraft escaping it in a tight-turning dogfight. The R-74M program, however, ran into problems after the Russian annexation of Ukraine’s Crimea region in 2014, followed by Moscow’s support of separatists in Ukraine’s eastern provinces. The Ukrainian Arsenal company, which provided the seeker for the R-74M, ended its cooperation with Vympel. Despite efforts to launch production of the same seeker at a factory in Russia, this has apparently proven impossible to achieve.

In place of the R-74M, Russia instead switched its focus to the K-74M2 (the K suffix denotes a missile that is still in the development phase), which is optimized for internal carriage by the Su-57 Felon new-generation fighter. As well as being more compact to fit in the weapons bays, the K-74M2 importantly adds a seeker from the Russian Azov AOMZ company, plus a rocket motor with increased burn time, for longer range. The weapon can also be fired in lock-on-after-launch mode, which is typically required when launched from an internal bay, the missile beginning its flight under inertial control before achieving an in-flight lock-on.

So far, then, Russian efforts to replace the R-73 have concentrated on further evolutions of the R-73/AA-11, rather than an all-new design. In contrast, the Izdeliye 300/K-30 was to have been a “clean-sheet” missile, and the recent disclosure from Vympel suggests strongly that it is now back in development in a revised form.

While Vympel has yet to release more details about the new Izdeliye 300M, the original Izdeliye 300 was expected to include a new imaging infrared seeker that would have enabled targets to be acquired twice as far away as compared to the original R-73. This would imply a maximum seeker range of between 12.4 to 15 miles, compared to 6.2 to 7.5 miles for the R-73, based on publically available figures. Imaging infrared seekers are by now a regular feature of Western heat-seeking missiles, offering much better resistance to countermeasures, among other enhanced capabilities. The Izdeliye 300 would also have featured a more powerful dual-pulse solid-propellant motor, and an all-moving nozzle for thrust-vector control, rather than the paddle-type vanes used on the R-73.

What little we know about the appearance of the is based mainly on unofficial artworks, which suggest a slender weapon with cruciform tailfins. The image below purports to show a mock-up K-30, but probably, in fact, depicts the Gran from the Ukrainian Luch design bureau, another weapon that seems to have been derived from the original Izdeliye 300 design, but which adds long-chord narrow-span cruciform wings on the body.

Development work on a new Russian short-range air-to-air missile would be timely, due to the age of the R-73 and the limited numbers of weapons of any type in this class that has been produced for the Russian military, as opposed to export. A production version of the Izdeliye 300M would likely be sized for internal carriage by the Su-57 and perhaps also the Okhotnik unmanned combat air vehicle (UCAV). In this previous article, you can read about how the Okhotnik was reportedly flight-tested with air-to-air missiles for the first time last year. Russia hopes to have the combat drone service as early as 2024.

Of course, a new short-range air-to-air missile could also arm the existing fighter jets in the Russian inventory and may also prove popular as an export product, continuing the success of the R-73 but offering capabilities far better to rival weapons in its class. As Russia continues to seek export customers for the Su-57, the availability of a new-generation short-range air-to-air missile with which to arm it would provide a useful selling point, especially as new generations of medium- and long-range weapons are already available.

There is also the question of the shelf-life of Russia’s existing stocks of short-range air-to-air missiles. While it is unclear how many examples of the R-74M have been built, it seems the K-74M2 has not yet entered quantity production. There are much larger stocks of R-73s, but many of these are now getting very old and may no longer be viable for use. Reportedly, 6,000 examples of the R-73 were produced annually until the early 1990s, but after 1992, almost all of these missiles were manufactured for export. We don’t know for sure the shelf life of an R-73, but unconfirmed reports suggest it may be around eight years, and this figure would be rapidly reduced if the missile were to actually be carried on an aircraft. For comparison, the more modern AIM-9X Block I was designed with a 20-year service life assumption.

The exact status of surviving R-73s in the Russian inventory is unclear and it is possible that many of these have been carefully handled and their service lives extended, while the amount of “flight time” they have accumulated has been kept to a minimum. Even if that is the case, and with Russia having struggled to introduce a truly modern indigenous seeker on the interim R-74M, a new-generation short-range air-to-air missile is clearly a high priority.

For now, more precise details of the Izdeliye 300M remain unavailable. The fact the manufacturer has highlighted its existence is significant, however, and the available evidence suggests that Russia is finally moving closer to completing an all-new short-range air-to-air missile.