The Navy says conformal fuel tanks, long-touted as a critical upgrade for its Super Hornets, may be turning out to be more trouble than they're worth. 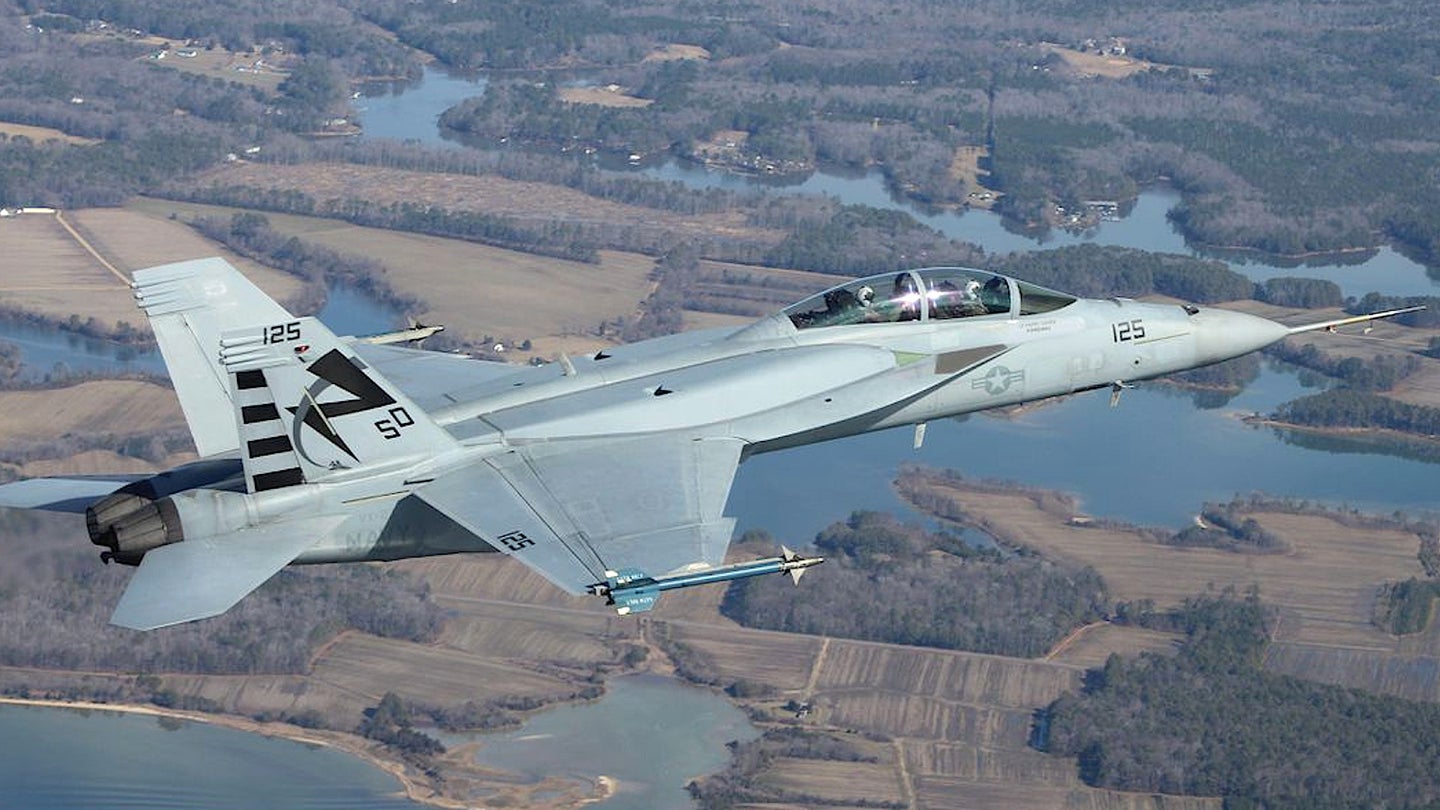 The U.S. Navy is considering removing conformal fuel tanks, or CFTs, from the Block III upgrade package for its F/A-18E/F Super Hornets after discovering various issues with them during testing. Deciding not to pursue these tanks, which are designed to extend the Super Hornet's range even without it having to carry drop tanks in place of other underwing stores, could have significant ramifications for the service's future tactical aviation plans. It could also impact the export prospects for these jets, as well.

Aviation Week was the first to report the potentially serious problems with the CFTs on Jan. 28, 2021. Boeing has been flight testing Super Hornets with the tanks as part of the Block III upgrade program since at least 2019. The company had previously experimented with adding CFTs to the aircraft, in cooperation with Northrop Grumman, as part of a proposed Advanced Super Hornet upgrade package, which it publicly unveiled in 2008.

The Navy told Aviation Week that unspecified "technical, structural, and sustainment" problems had arisen in tests of the CFTs as part of the Block III upgrade effort. The service added that the issues had emerged during testing in a "carrier environment."

While we don't know what the exact issues are, the Navy's disclosure that there is a specific link between them and the operation of CFT-equipped jets from its aircraft carriers could suggest the problems have to do, at least in part, with how the upgraded aircraft handle the stresses of catapult launches and arrested recoveries. At the same time, the tanks were designed to handle the strains of high-g aerial maneuvers.

Another possibility might be that the tanks have been found to block access to key sections of the aircraft when they are installed, requiring their removal to perform certain routine maintenance and other tasks, adding costly time and effort to those processes. It's also interesting to note that the section on the F/A-18E/F Super Hornet in the latest annual report from the Pentagon's Office of Director of Operational Test and Evaluation, or DOT&E, makes no mention of the conformal fuel tanks, at all.

"The Boeing Block III Super Hornet’s advanced capabilities provide the Navy with multiple options for increasing an air wing’s combat effectiveness," was all Boeing would say in a statement to The War Zone in response to queries about the issues the Navy has uncovered with the CFTs. "Together with the Navy, Boeing will ensure that the Block III remains the most versatile tactical aircraft in the fleet."

The addition of the tanks is just one of the planned Block III upgrades. The full package, which you can find out more about in this previous War Zone piece, also includes new coatings to help reduce the radar signature of the aircraft, new mission computers and data links, and highly customizable wide-area multi-function displays in each cockpit, including the rear ones on two-seat F/A-18Fs. The Navy is also in the process of adding improved satellite communications (SATCOM) systems and the ability to use an infrared search and track (IRST) sensor installed in a modified drop tank, the latter of which you can read about in more detail in this past War Zone feature, to its Super Hornets through separate programs.

However, the CFTs are a particularly significant part of the upgrade plan. Two of the aerodynamic CFTs, each of which can hold up to 515 gallons of fuel, are designed to be installed on top of the center "barrel" section of the F/A-18E/F's fuselage, fitted one on each side of the aircraft's central spine.

At least in principle, this provides significant benefits in range and performance over draggy drop tanks, which can only hold 480 gallons of fuel each. Jets with CFTs can also carry additional stores on underwing pylons that otherwise would have to be set aside to carry the drop tanks.

The CFTs would also help make up for the loss of fuel in the new IRST-equipped centerline drop tanks. Those tanks can only carry 330 gallons of fuel, instead of 480 gallons. An F/A-18E/F with one of these drop tanks, as well as six AIM-120s and two AIM-9Xs, would have a combat radius of around 509 nautical miles, according to Boeing. With CFTs, that would be extended out to 611 nautical miles.

The Navy has touted this added range, and the additional stores capacity when operating out to those distances, as an important way to expand the overall capabilities of its carrier air wings. At the same time, it has described the benefits that the CFTs offer, together with the extra range future MQ-25A Stingray tanker drones will also provide, as a critical way to help reduce the vulnerability of its aircraft carriers. Extending the reach of these jets, as well as other aircraft in the carrier air wing, such as the F-35C Joint Strike Fighter, means that flattops can launch them while staying further away from ever-growing anti-access and area denial threats, including advanced anti-ship cruise and ballistic missiles, especially in any potential future high-end conflict against a near-peer adversary, such as Russia or China.

If the Navy now determines that the CFTs are more trouble than they're worth, its future Block III F/A-18E/Fs will be stuck with the same range and stores capacity limitations as its existing Super Hornets. The aforementioned MQ-25As could help mitigate this, but these drones alone would inherently offer more limited range-extension benefits than they could in combination with CFT-equipped Super Hornets. Those unmanned aircraft will also be heavily in demand to support future carrier air wings' F-35C Joint Strike Fighters, which cannot, at least at present, carry external drop tanks, at all. Any such external tank would negatively impact the radar-evading qualities of the F-35s to some degree, as well, making it unlikely that these jets would carry them on missions where they would need to be in their most stealthy configuration.

The CFTs have also been seen as a feature that could be ported over to the Navy's EA-18G Growler as part of a Block II upgrade program for those electronic warfare aircraft. These aircraft would also greatly benefit from added range, something that also translates to longer time on station, while simultaneously freeing up underwing pylon space. The EA-18Gs already have to lug around extra fuel, along with large jamming pods, to perform their missions.

With the Navy already looking to stop buying new Super Hornets, eliminating the CFTs from the Block III upgrade program could place more emphasis on its efforts to acquire new manned and unmanned carrier-based combat aircraft. The service is still very much in the process of figuring out what exactly its future carrier air wings might look like as it progresses with its Next Generation Air Dominance (NGAD) program, which you can read about more in this previous War Zone piece and should not to be confused with the Air Force's effort of the same name.

The Navy cutting the CFTs could have impacts on Boeing's efforts to pitch Super Hornets with some or all of the Block III features to foreign countries, as well. The tanks are a notable component of the offers the company has submitted in competitions to supply jets to the Royal Canadian Air Force and the Indian Navy, among others.

If the problems uncovered so far do turn out to be limited to operations from catapult-equipped carriers, this might be less of an issue. The Indian Navy, for instance, only has one carrier in service, at present, and another under construction, both of which feature ski jumps, rather than catapults. Canada plans to operate whatever new fighter jets it ends up buying from bases on land, as does Germany, which recently decided to acquire F/A-18E/Fs as a partial replacement for its aging Panavia Tornado combat jets.

It is important to stress that the Navy has not yet made a final decision on how it will proceed, or not, with adding CFTs to its Super Hornet fleet as part of the Block III program. Still, that the service is considering axing the tanks from the planned slate of upgrades at all is a significant development that signals there are real challenges preventing the full potential benefits they offer from being realized.