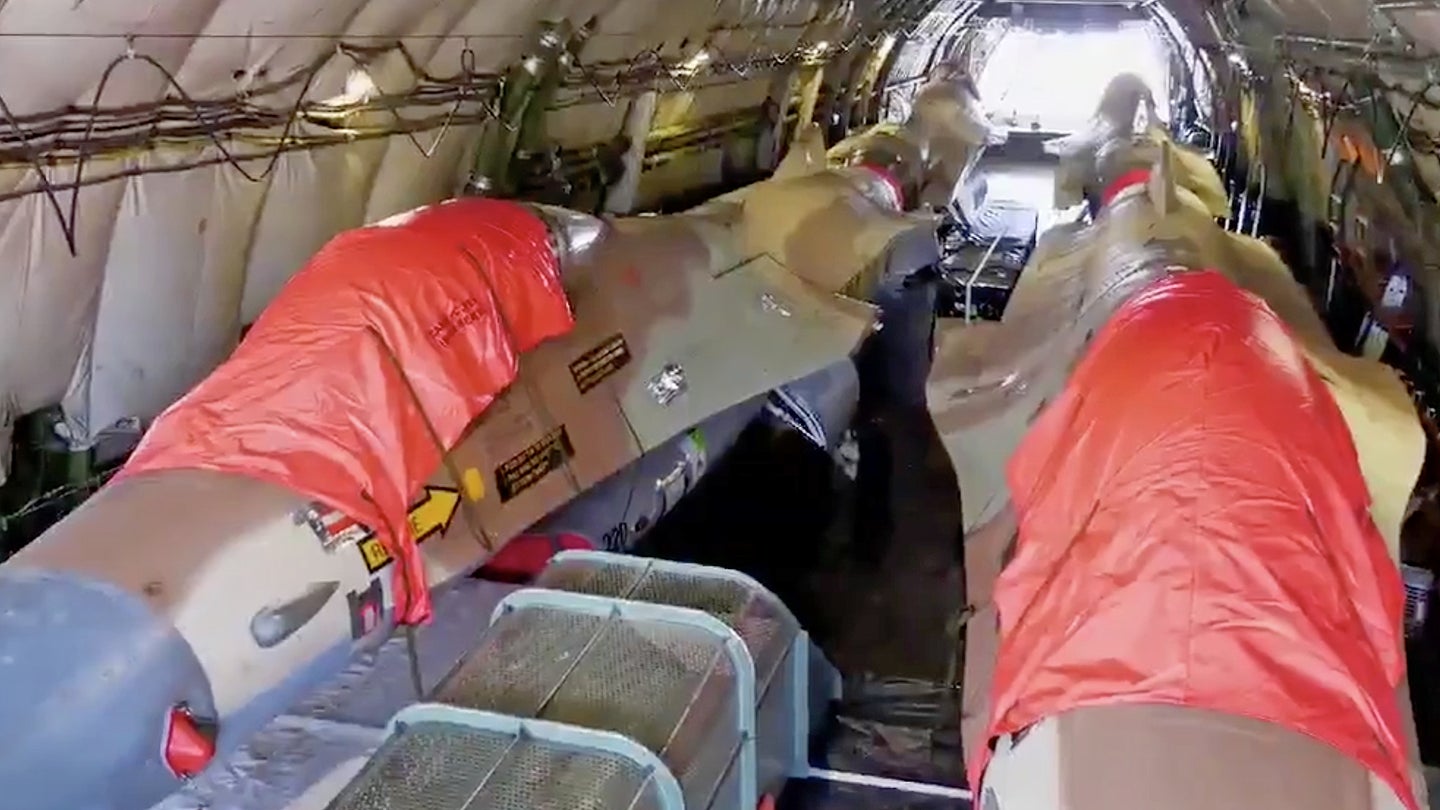 New details have come to light about the initial four ex-Israeli Air Force F-16s heading to North America to join Top Aces. This company is the first private contractor offering red air adversary support to get its hands on a fourth-generation fighter, which you can read more about in The War Zone’s initial report on these aircraft. We now know that, during their previous combat careers in Israel, three of these jets brought down Syrian MiGs during the conflict in Lebanon in the early 1980s, and one of them also took part in the long-range daytime bombing raid on Iraq’s Osirak nuclear reactor in 1981.

Photos that emerged yesterday had shown the F-16s with their wings and tail surfaces removed, waiting to be loaded onto a Ukrainian-registered An-124 cargo aircraft for transport to the United States, but without the serial numbers visible. The An-124 departed Ben Gurion Airport, outside Tel Aviv, yesterday and then landed in Iceland for an overnight stop. Online flight-tracking information indicates that its final destination is Phoenix, Arizona, where the aircraft should arrive today.

So, let’s now examine more closely what we know about the backgrounds of these particular jets.

This Block 5 single-seater, which also received the U.S. Air Force serial number 78-0322 and has the General Dynamics construction number 6V-15, was originally allocated to an Iranian order, codenamed Peace Zebra, which was canceled after the revolution that toppled the Shah in 1979. It was then rolled into the Peace Marble I order of 1978, which was the first Israeli F-16 acquisition and covered 75 aircraft.

Delivered to the IAF in 1980, Netz 129 was assigned to 117 Squadron. The jet took part in the attack on the French-made Osiris-class nuclear reactor in Iraq, also known as Osirak, on June 7 the following year, also known as Operation Opera. According to F-16.net, the jet was flown by Hagai Katz and was the fourth of the eight F-16s involved to drop its bombs.

During the mission, each of the jets was loaded with two 2,000-pound-class Mk 84 bombs with delay fuses, and the strike package was escorted by six F-15As. Against great odds, the mission was a huge success. If the reactor had not been destroyed, it could have helped provide a clear pathway to Iraq becoming the first nuclear-armed Arab nation in the Middle East. The images in the tweet below show Netz 129 as it appeared immediately before Operation Opera, and again as it was loaded onboard the An-124 for transport yesterday.

During its IAF career, Netz 129 also received the individual name Hanit, while markings were applied to the nose to commemorate the Osirak strike, as well as half of a Syrian Air Force roundel, denoting the shared destruction of an enemy aircraft. This incident apparently took place on June 9, 1982, when the jet was being flown by future astronaut Eytan Stibbe. Both Stibbe, and Eliezer Shakedi, in another Netz, each used an AIM-9L Sidewinder air-to-air missile to down a Syrian Arab Air Force MiG-23 Flogger combat jet during the intense air war over Lebanon. The same sequence of events is recounted in The Sword of David: The Israeli Air Force at War, by Don McCarthy.

Another single-seater that was once anticipated for delivery to Iran, Netz 220 also has the U.S. Air Force serial number 78-0327 and the manufacturer’s construction number 6V-20. This jet was from the Block 10 production batch and was also delivered to Israel under Peace Marble I. During its IAF service, it received a single kill marking.

This kill was achieved on June 9, 1982, when pilot Amir Nachumi downed a Syrian MiG-21 Fishbed using an AIM-9L missile, during the fighting over Lebanon. Nachumi himself is one of the preeminent Israeli F-16 pilots, credited with 14 victories, seven of which were achieved in the type, with the remainder in the F-4 Phantom II. He retired as a brigadier general and also took part in the Osirak attack.

The only two-kill Netz among this batch of four, this aircraft also has the U.S. Air Force serial number 78-0346 and construction number 6V-39. It was completed as a Block 10B jet and was also diverted from the planned Iranian Peace Zebra order. Delivered to Israel under Peace Marble I, it initially served with 110 Squadron of the IAF, in whose hands it downed another two Syrian aircraft during the 1982 Lebanon War.

On June 6 that year, Roee Tamir was at the controls when he blasted a Syrian MiG-21 out of the sky with an AIM-9L missile. Two days later, it was the turn of Avishai Cana’an, who destroyed a Syrian MiG-23BN Flogger-H ground-attack aircraft, also using a Sidewinder.

The sole two-seater among the first batch of jets delivered, which also has U.S. Air Force serial number 78-0362 and construction number 6W-8, this aircraft was once expected to be completed for Iran as a Block 5B aircraft, but instead went to Israel under Peace Marble I. This Netz is not known to have seen any combat service, reflecting the fact that these early-model two-seaters were used almost exclusively for training.

This Block 5, and others, was upgraded once in service to bring them to a common Block 10 standard. Overall, the Netz fleet was further modernized, too, and the aircraft reportedly are now broadly equivalent in terms of capability to an F-16 Block 15 OCU jet, but still retained the original head-up display.

Clearly, the F-16 Netz was one of the most important combat types operated by the Israeli Air Force since its establishment. It remains to be seen what other combat records are associated with the remaining jets that Top Aces has now acquired. In fact, the exact number of jets that the company is getting remains unclear, although it has been cleared to buy as many as 29. Some of those jets could provide the Canadian contractor with its own flying movie stars, too — it was Israeli Netz jets that helped introduce the world to the F-16, in the 1986 air combat yarn Iron Eagle. You can read more about how the jets came to take part, here.

In the meantime, it is fitting that these first three combat veterans at least are set to continue to do aerial battle in the future — this time, within the much safer parameters of the red air aggressor mission.

Update: 2:30 pm PST: A tweet from the Israeli Ministry of Defense from earlier today confirms that Top Aces will be supplied with all 29 F-16A/Bs. The first four of these have now arrived in Phoenix-Mesa Gateway Airport, Arizona, onboard the An-124 transport.