The tiny drones can carry various payloads, including video cameras and explosive warheads, and fly together as a swarm after launch. 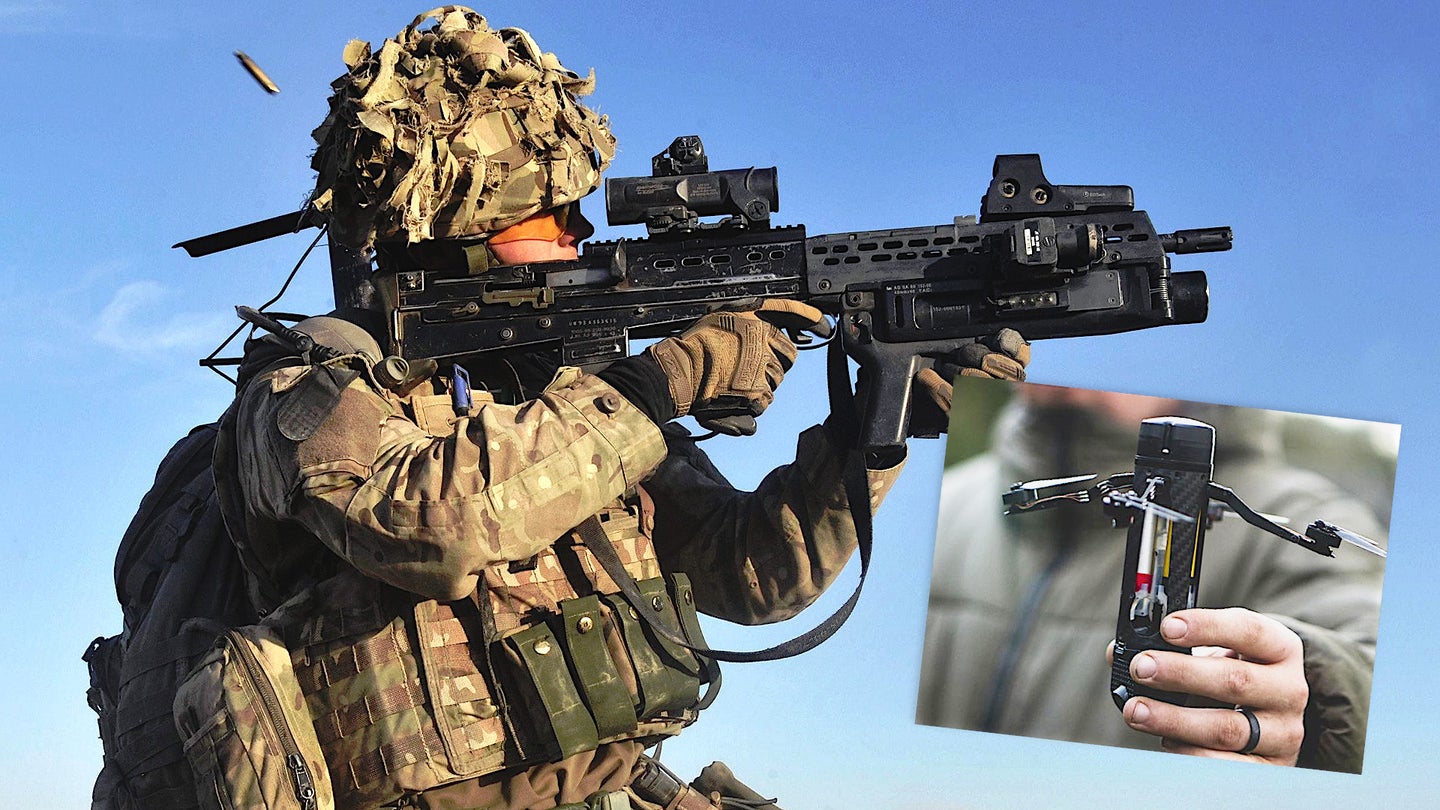 British Army troops in Mali are now reportedly using tiny unmanned aircraft that can be fired from standard 40mm grenade launchers. These diminutive quad-copter-type drones can be fitted with various payloads, ranging from full-motion electro-optical video cameras to small high-explosive or armor-piercing warheads, and that can fly together as a swarm after launch.

was first to report that members of the U.K. Task Group in Mali had received "several hundred" Drone40s from Australian firm DefendTex. British forces are in Mali as part of the country's Operation Newcombe, which provides support to Operation Barkhane, a French-led regional counter-terrorism effort, and the United Nation's Multidimensional Integrated Stabilization Mission in Mali, also known by its French acronym MINUSMA.

The Drone40, which DefendTex unveiled publicly in 2019, was among various new systems that British Army troops from the Light Dragoons and Royal Anglian Regiment were seen training with during a Mission Rehearsal Exercise (MRX) in October 2020. That MRX was part of the workup for members of those units that headed for Mali in December. It's not clear if the British Army has decided to acquire Drone40s for widespread use among its units or if it is conducting an operational evaluation through Operation Newcombe.

The Drone40 can be fired from launchers designed to fire standard 40mm low-velocity grenades. Its overall length is variable depending on the type of payload installed, but DefendTex says the length of the core body is close to five inches. As such, a launcher designed to fire over-sized 40mm cartridges, such as variants of the Heckler & Koch AG36 under-barrel grenade launcher, which are in service with U.K. and U.S. forces, among others, is necessary to employ them. Some older launchers, most notably the very popular American-made M203, can only accommodate relatively short 40mm rounds.

The Drone40 can also be deployed by hand, as was demonstrated during the British Army's MRX in 2020, as seen in the video below. Its design would mean that, regardless of the employment method, troops could carry them in web gear intended to carry standard 40mm grenades.

While Drone40s configured with the video camera payload were shown in videos from the MRX, it's not clear if British troops in Mali have received any other types. DefendTex says that payload can be readily swapped in the field and that when fitted with the cameras, the drones can be recovered and reused.

The feed from Drone40s equipped with the cameras is transmitted back to the operator via a line-of-sight link and is on a hand-held tablet-like device. This is also how the drone's movements are controlled after launch, via a GPS-enabled navigation system.

The camera configuration by itself would be an obvious boon for troops, especially those operating in small units. Drone40s with these payloads offer a way to scout ahead for enemy forces or other hazards, especially in areas full of natural or man-made cover, such as dense urban environments.

In addition, though, DefendTex offers high-explosive and anti-armor warhead options, as well as smoke and less-than-lethal flash-bang payloads. There is also an option to fit the drones with small electronic warfare jammers or laser designators to mark targets.

These other payloads would give units equipped with Drone40s a host of other capabilities. Friendly units safely behind cover could send out armed examples to fly over enemy positions and launch attacks from above. They could also deploy smoke screens to shield their movements or jam enemy communications systems or sensors to confuse or disorient them. Laser pointer-equipped types could paint targets for other units to engage with precision-guided munitions.

On top of all this, DefendTex says that Drone40s can operate together as at least semi-autonomous swarms after launch. They also offer was it described as multiple round simultaneous impact (MSRI) capabilities.

What this means is that a single individual could fire multiple Drone40s with kinetic payloads and then they could be directed to fly to a designated point, after which they would all drop at the same time. With a mix of different warhead types, this could allow for more effective engagement of complex and dispersed targets all at once, such as troops standing in the open near light armored vehicles.

Combined with a camera-equipped type, the Drone40s could act as loitering munitions, hovering over a certain area, waiting for targets to emerge, and then being directed to engage them when they do. DefendTex says that the unmanned aircraft have a range of at least 12 miles and can remain airborne for 30 to 60 minutes, all depending on what type of payloads they're carrying. Of course, line-of-sight restrictions exist for the command links between the operator and the drones, but it may be possible to use another drone to work as a relay.

For British troops in Mali, who are tasked with conducting patrols over broad areas in a region where various militant groups are very active, the benefits of just having small drones to provide additional immediate situational awareness are obvious. If they have received other types of payloads for their Drone40s beyond the camera package, it could provide them with an additional means of engaging enemies in the event of an ambush or any other kind of firefight.

For these exact reasons, very small so-called nano-drones are becoming increasingly popular among military forces around the world. Interestingly, the U.K. armed forces had previously employed early versions of the Black Hornet, a tiny hand-launched drone helicopter, in Afghanistan, starting in 2012, before withdrawing them from service in favor of larger individually-launched types sometime between 2016 and 2017. You can read more about the Black Hornet, variants of which are now in service in almost 20 different countries, in this past War Zone piece.

The Drone40 is also not the only drone intended to be launched from a 40mm grenade launcher presently on the market. The U.S. Army evaluated another type, Skyborne Technologies' Cerberus GL, during its annual Army Expeditionary Warfare Experiment AEWE in 2019. It's interesting to note that Skyborne Technologies is also based in Australia.

Last year, researchers at the Army Research Laboratory (ARL) filed a patent on another camera-equipped 40mm drone design, known simply as the Grenade Launched Unmanned Aerial System (GLUAS). That unmanned aircraft can remain aloft for up to 90 minutes, but has a maximum range of just over one mile, indicating that it may be slower than the Drone40 and more limited in range in terms of its command and control interface options.

All told, the British Army's fielding of the Drone40, even in limited numbers with forces in Mali, is another example of how drones and other unmanned capabilities are only becoming more and more ubiquitous, including at the very lowest operational levels, among military forces around the world.

These tiny drones give even small units a significant boost in situational awareness, providing a low-risk way to spot ambushes and other threats.