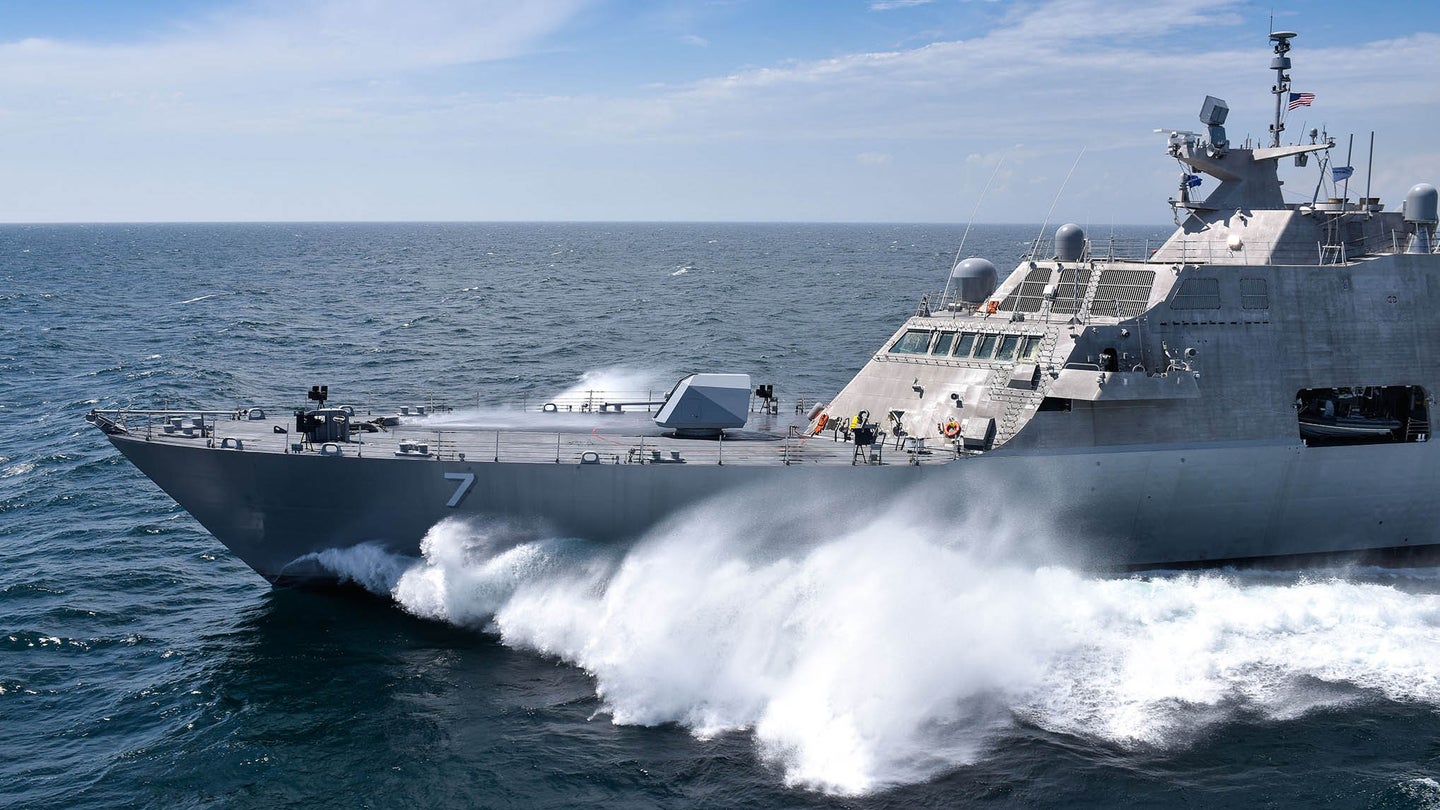 In the latest setback for the U.S. Navy’s troubled Freedom class Littoral Combat Ship, the service has decided to suspend further deliveries of the warships until a persistent problem with the transmission is finally ironed out. Industry journal Defense News reported today that the Navy had confirmed to them that “a material defect” in the transmission on the Freedom class would have to be fixed before any more of the warships are accepted for service. As it stands, 10 examples of the Freedom class have been delivered, with another five under construction or in the process of fitting out, and one more example is on order, too.

The news follows an incident last October when the Freedom class Littoral Combat Ship (LCS) USS Detroit suffered a significant breakdown while operating in the waters around Latin America. You can read all about the related events here.

A failure of the combining gear, a part of the ship’s drive train, was thought to be the cause of the October incident and it’s a design flaw in the same feature that has led to the Navy’s latest decision. The combining gear, which has been a source of problems on multiple occasions in the past, links the two main diesel engines on the Freedom class ships to a pair of gas turbines, which can provide additional power for its water jet propulsion system. This combined system is key to the ability of these ships to reach speeds of over 40 knots, which was a core requirement when the ships were under development. On diesel engine power alone, their top speed is only around 10 to 12 knots.

Previous incidents involving the troublesome combining gear also occurred in 2015, when the USS Milwaukee suffered a problem with this part of its propulsion system while making its maiden voyage to Naval Station Mayport in Florida, where Detroit is also homeported.

The following year, USS Fort Worth experienced a significant breakdown in its combining gear, as well. The Navy subsequently determined that incident to have been the result of a chain of errors by the crew that resulted in the system running for an extended period without critical lubricating oil.

Last December, as concerns about the combining gear grew, the Navy told Defense News that the government was “investigating a material defect with the combining gear of USS Detroit and USS Little Rock, both Freedom-variant Littoral Combat Ships.” The same statement noted that a joint Navy and Lockheed Martin team was working with RENK AG, the original equipment manufacturer, to find the root cause of the defect.

The Navy has now told Defense News that it’s working on a fix to address Freedom class LCSs already in service, while new hulls will begin to be delivered again once this has been introduced. However, an anonymous senior Navy official told the same publication that the fix is likely to take months to install on each ship.

Although the Independence class LCSs are of a separate design, they too have been dogged by problems with their propulsion systems. Ships from both subclasses have been involved in various mishaps, over the years, as well.

This catalog of reliability issues has led to the Navy conducting only very limited operational deployments of its two LCS fleets, ever since the first-in-class USS Freedom, also known as LCS 1, was commissioned more than a decade ago. In 2018, for example, not a single LCS from either subclass was deployed operationally anywhere.

Last September, the Navy began its latest initiative to try to and get more valuable service out of its LCSs. This involved sending the Spearhead class expeditionary fast transport USNS Burlington to the U.S. 4th Fleet area to serve as a mothership for Detroit and other LCSs in the region. A Maintenance Expeditionary Team onboard the Burlington was available to work on the ships while at sea, hopefully reducing the number of port visits required for more intensive repairs.

Aside from that, the LCSs also pack only fairly modest combat capabilities. While there exists a Navy initiative to provide an over-the-horizon anti-ship missile capability, so far only the Gabrielle Giffords has actually received the RGM-184A Naval Strike Missile (NSM) and this effort has also faced its own set of problems. It has been suggested that some of the LCSs might eventually also receive laser weapons.

As for the first two LCSs in each subclass, these were produced with such considerable differences compared to subsequent members of their respective classes that the Navy has now begun looking at options to retire them entirely. As it is, these four vessels are currently only deemed fit for training and test and evaluation, a result of the concurrency procurement concept that has affected other Department of Defense programs too, and which you can read more about here.

Ultimately, while the Navy has announced plans to build an entirely new class of more capable frigates, the first of which uses a design from an Italian shipbuilder, it has so far chosen to stick with its LCSs, despite their various shortcomings. The service will no doubt be hoping that, once a long-term fix has been devised for the Freedom class, both subclasses of LCS will eventually finally fulfill even a portion of their hoped-for potential.