It has been a very tough couple of weeks for America's fighter jet communities. 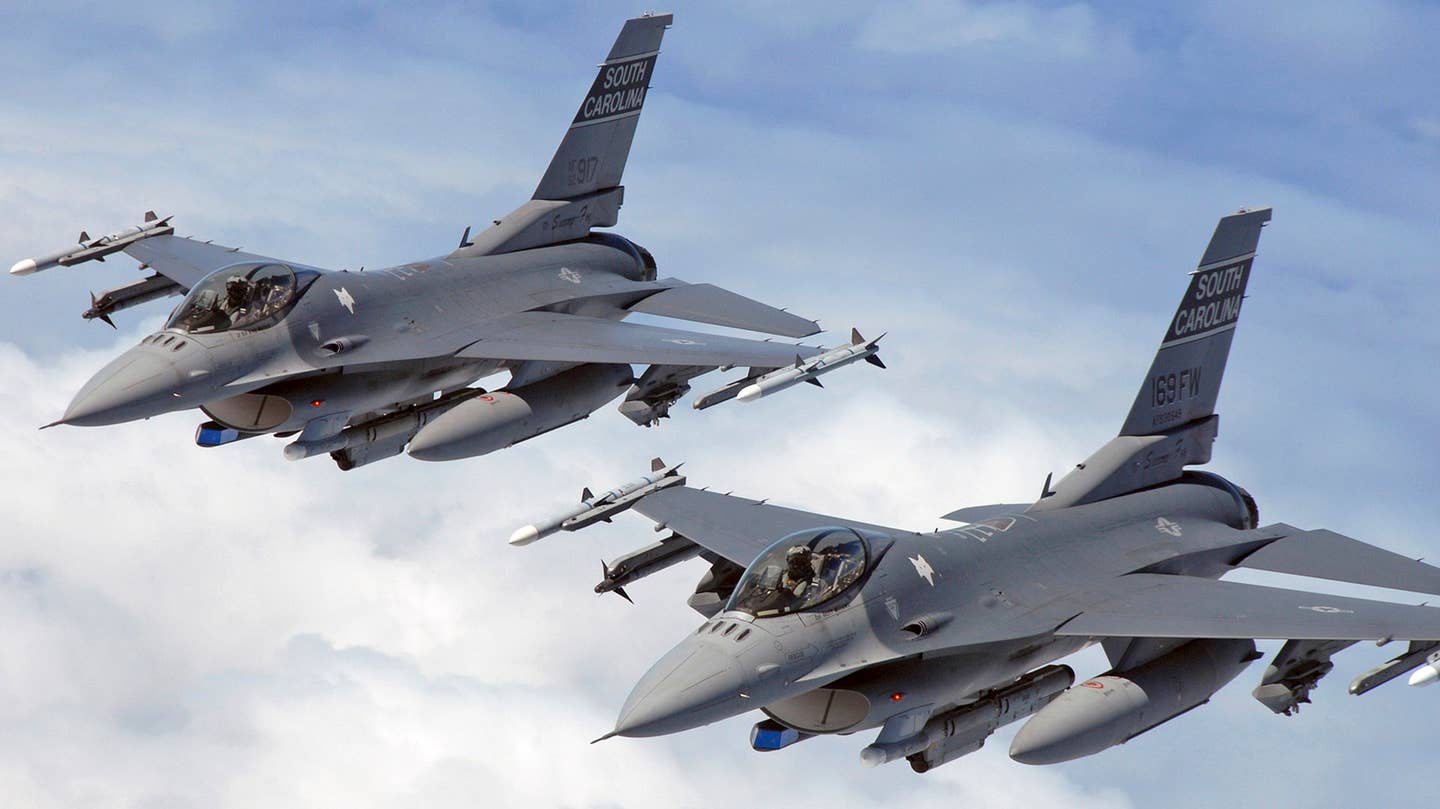 A pair of Block 52 F-16CJs from the South Carolina Air National Guard’s 157th Fighter Squadron, the Swamp Foxes, collided during a night training sortie last night. Thankfully both pilots ejected safely and have been recovered in good condition. The event occurred in the “Bulldog” military operating area and Townsend Bombing Range in Jefferson Country, Georgia. The range is frequented by USAF, Navy and Marine aircraft. There have been no reports of injuries from the stricken jets’ fall to earth.

The collision comes after a spate of high profile tactical fighter crashes over the last couple of weeks. Two US Navy Super Hornets collided during a daylight training mission off the coast of North Carolina on May 26th, both aircrews ejected and were recovered in good condition. Then, just last week, another Block 52 F-16C belonging to the USAF Thunderbirds was lost after performing a flyover for the USAF Academy graduation. On the same day the Blue Angels lost one of their teammates, opposing solo pilot Captain Jeff Kuss, during a demonstration training flight. Strangely, both incidents included each team’s #6 jet.

All of these crashes are under investigation, with the Thunderbirds #6 jet, which was left largely intact and lying in a field a few miles south of Peterson AFB, having been removed just yesterday. Meanwhile, the Blue Angels, which have been hit hard by the loss of their teammate and friend, executed a moving and unique aerial display over the team’s home town of Pensacola, Florida last night.

The team’s solos are a unit onto themselves, as their flying is some of the most dynamic and precise in the demonstration. As such, the existence of a unique bond between the two solos is a staple of the Blue Angel’s culture. With this in mind, Fat Albert had a giant gold “6” painted on its nose for the tribute mission. The two solos were united in the air one last time.

A memorial will be held for the Captain at NAS Pensacola’s chapel on Thursday.

Both the Blue Angels and the Thunderbirds stood down from display flying following the harrowing events of June 2nd, canceling a series of appearances in the process. The Thunderbirds have since taken back to the air for formation training. So far just near-term shows have been cancelled and there is no talk of an entire season stand-down, but that could change as more details emerge as to the cause of the crashes. In the meantime, the Navy has increased its Super Hornet single-ship demo capacity to fill in the best they can for shows where the Blue Angels were supposed to appear.

The Blue Angels may take more time to recover considering the severity of the incident and the loss of Captain Kuss. Just replacing a member of the flight demonstration team without a crash complicating matters is a huge issue as the team has trained as an integrated unit arduously over the winter to perform the demo with confidence and precision.

In the past, when a member needed to be replaced, past Blue Angels pilots have been called upon to do so if available. This still takes training and time. It is possible that the Blue Angels could perform the demo without a #6 aircraft, changing the #5’s routine without effecting the flow of the four-ship diamond, but this would leave  the six-ship delta formation without one of its wings.

Although this would look strange, it does happen already when one of the solo jets is down for service and the spare is not available or cannot launch in time. It could also be a fitting tribute to the team’s lost comrade all in itself.

One thing is for certain, if and when the Navy’s bureaucracy clears the Blues to start training as a team again, the team will find a way to come back as strong as possible. I mean they are the Blue Angels, if any group of people on this planet can mount an awe inspiring comeback, it’s them.