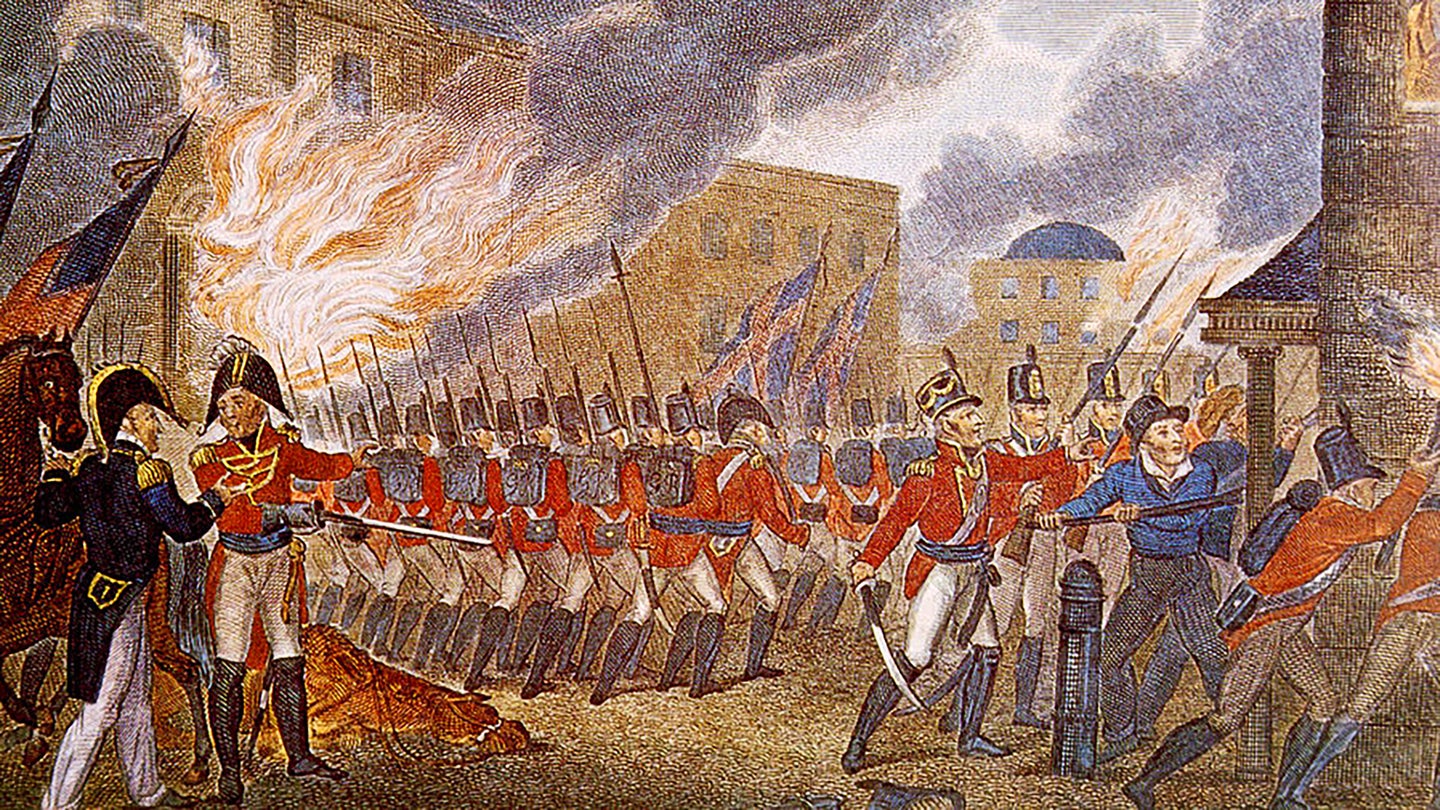 On January 6, 2021, the United States Capitol came under siege for several tense hours as supporters of President Donald Trump attempted to disrupt the joint session of Congress that had convened to certify President-elect Joe Biden's win in the 2020 presidential election. The Capitol went under lockdown as security forces, including Capitol Police and FBI strike teams, cleared the building and restored order. By the time the facility and its surrounding grounds were secured, four people had lost their lives and dozens of others were injured.

It had been over 200 years since the last storming of the Capitol, which occurred during the War of 1812. At the height of that conflict, British troops fought their way up the Patuxent River, eventually making their way into Washington, where they burned several government buildings, including the Capitol. To help contextualize yesterday’s disgraceful and unprecedented events, here's a look back at what happened the last time the seat of American democracy came under siege.

In the early 1800s, a conflict began brewing between America and Great Britain. Britain was implementing several naval policies that heavily restricted trade by the fledgling United States. These included harassing ships at sea and even forcibly conscripting American sailors to serve in the British Navy. The United Kingdom also aided Native American tribes in their resistance against America's westward expansion.

When James Madison was elected president in 1808, he instructed Congress to begin preparing for another war with Britain. Congress would vote to declare war against the British on June 18, 1812, and fighting began in July when American forces invaded Canada, which was at that time a British colony. Those forces would be beaten back, but the fighting would continue for over two more years.

On August 24, 1814, British troops led by Major General Robert Ross marched into Washington City (now Washington D.C.) after defeating American forces at the Battle of Bladensburg, one of the worst defeats in American military history. Attempting to hold them off was a ragtag band of between 6,000 and 9,000 hastily-mustered and poorly-trained American militiamen and a few hundred seasoned regular army troops under the command of Brigadier General William Winder.

The American forces, despite their greater numbers, were easily defeated due to several tactical errors, coupled with the skill of British sharpshooters and the British use of Congreve rockets, a crude, early form of rocket-propelled grenade. In addition to the damage they inflicted, just the violent sight and sound of the rockets drove American forces back in terror. Casualties on both sides were relatively light during the battle, but American forces fled in disarray, leaving Washington nearly undefended.

With a clear path to Washington in front of them, Rear Admiral George Cockburn ordered close to 4,000 British redcoats and Royal Marines to march on the American capital.

As British troops approached Washington, Ross used his drummers to play a parley, a drumbeat meant to signify a request for the American leaders to discuss terms of surrender and/or truce. When no American commanders returned the offer, Ross and Cockburn marched into Washington with no intention of razing the city. However, after snipers fired upon British officers, the decision was then made to burn buildings, but only those belonging to the American government, to send a clear signal that British grievances were with U.S. authorities, not the American public.

In all, British sappers burned 10 government buildings including the Department of War building, the Treasury, the Executive Mansion, and the Capitol. The Executive Mansion, now known as the White House, was painted white in 1817 to hide the scorch marks left behind by the blaze. The Capitol was still under construction at the time, but British troops found enough furniture and documents and brought enough gunpowder to quickly set the interior of the building alight. The entire Library of Congress – at the time consisting of 3,000 books – made for a fast-burning fire that spread to the Senate Chamber.

While much of the Capitol was constructed of fireproof materials, such as iron, marble, and sandstone, the blaze inside did burn hot enough to melt glass skylights, destroy sculptures, and heavily damage much of the architecture. Some of the fires burned so quickly and fiercely that the British were forced to retreat from the flames, sparing several areas of the facility.

On August 25, 1814, a thunderstorm brought heavy rains down on Washington, dousing the flames set by invading British troops the day before. Several of the original sandstone architectural elements survived the fire, however, and can still be seen in the Capitol today.

When the rain subsided, hundreds of thousands of dollars worth of damage had been done to the U.S. Capitol, according to Superintendent of the Public Buildings of the City of Washington, Thomas Munroe.

On December 24, 1814, representatives of both sides of the conflict signed the Treaty of Ghent, named after the city in what was then the United Netherlands (today part of Belgium), where the ceremony took place. The deal effectively restored the pre-war status quo and saw the return of territory that the two countries had occupied during the course of the fighting.

The news of the agreement famously did reach U.S. forces under the command of future President Andrew Jackson before they won the Battle of New Orleans on February 12, 1815. The U.S. government did not formally ratify the treaty until February of that year, as well.

Reconstruction of the Capitol subsequently began late in 1815, with the help of military engineers, and would continue until 1826. The Capitol would later be expanded with new wings in 1850, while its recognizable dome was added in 1855 during another expansion. In 1958, yet another major expansion was added to the East Portico.

The 2021 siege of the U.S. Capitol by supporters of President Trump may not have damaged the building to anywhere near the extent of the Burning of Washington in 1814, but the fact that mobs of protestors were able to storm the Capitol and breach Congressional offices will no doubt be remembered for centuries to come and have lasting effects on how security is handled in our nation’s capital for some time.