Pro-Trump protestors have stormed America's seat of power and law enforcement is trying to control the dire situation. 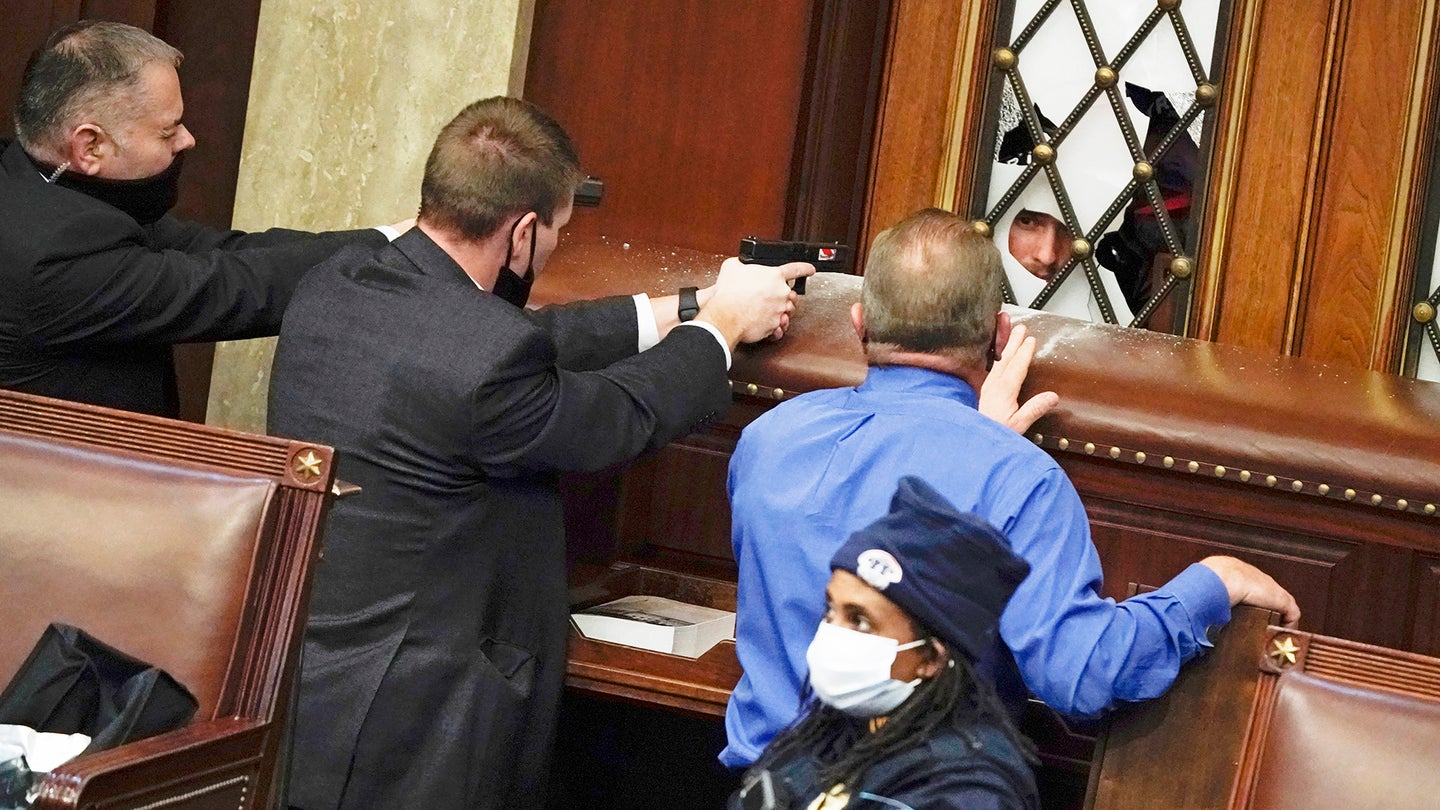 Unprecedented chaos has erupted at the U.S. Capitol in Washington, D.C. after supporters of President Donald Trump breached security barricades and made their way inside the building. The situation is evolving very quickly, but there are already reports of at least one person having been shot and the use of tear gas as Capitol Police and security personnel try to regain control of the scene.

Members of Congress were in the midst of a debate surrounding the certification of President-elect Joe Biden's win in the 2020 presidential election when the security breach occurred, prompting the Capitol to go into lock down. Trump has repeatedly asserted the results of the election were fraudulent, including at a rally just today in front of the White House, despite no hard evidence having been provided to support these claims.

So far, there have been no deployments of the National Guard or active U.S. military units in response to the security breach [See update below]. Secretary of the Army Ryan McCarthy, who is third in the chain of command of the District of Columbia National Guard, under the President and then the Secretary of Defense, is said to be in close contact with local and federal law enforcement officials about a possible deployment. The D.C. National Guard had already put hundreds of personnel on alert earlier in the week. D.C. Mayor Muriel Bowser has also already announced a curfew that will begin at 6:00 PM EST.

The images coming out of the U.S. Capitol are truly striking, with protesters making their way onto the floors of Congress and into individual members' offices. Law enforcement personnel have already detained some individuals.

In another truly unprecedented twist for most Americans, the leadership of foreign countries and international organizations are beginning to make public calls for calm in Washington, D.C. NATO Secretary General Jens Stoltenberg issued one such appeal. Another came from the Turkish government, which is certainly no stranger to political upheaval or autocratic leadership.

All told, this appears to be one of, if not the most significant breach of the Capitol since British troops stormed the building and set it ablaze on August 24, 1814, during the War of 1812.

A reported pipe bomb had already triggered an evacuation of a nearby building earlier in the day, but authorities had already sounded an all-clear regarding that incident before the violence erupted at the Capitol.

President Donald Trump has now issued a video statement calling for his supporters to "go home," but also continuing to insist that the election last November was "stolen" from him, despite there continuing to be no evidence of that being the case.

The Pentagon has now activated all members of the DC National Guard to help respond to the situation at the Capitol after talks with Mayor Bowser, in which she reportedly agreed to allow them to engage with civilians, which had been a point of contention. They will, however, not be armed.

Pictures have also emerged of a gallows that erected near the Capitol earlier in the day.

There is also video that shows Capitol Police officers opening a barricade to protesters before they stormed the building.

In addition to the Capitol Police and the deploying National Guard, reports also indicate that law enforcement offers from the D.C. Metro Police Department, the Federal Bureau of Investigation (FBI), the Bureau of Alcohol Tobacco and Firearms (ATF), the U.S. Marshals Service, and the U.S. Park Police have all also taking part in the response. You can read more about more specialized law enforcement capabilities, including tactical teams, better known as SWAT teams, that those agencies have to offer in this past War Zone piece.

Acting Secretary of Defense Chris Miller has issued the following statement regarding the activation of the D.C. National Guard:

"Chairman Milley and I just spoke separately with the Vice President and with Speaker Pelosi, Leader McConnell, Senator Schumer and Representative Hoyer about the situation at the U.S. Capitol. We have fully activated the D.C. National Guard to assist federal and local law enforcement as they work to peacefully address the situation. We are prepared to provide additional support as necessary and appropriate as requested by local authorities. Our people are sworn to defend the constitution and our democratic form of government and they will act accordingly."

The aviation picture has been interesting over Capitol Hill. Just one helicopter doing circuits over the Capitol is squawking, an AS 350 that belongs to the Washington D.C. Metropolitan Police:

Just minutes ago, an E-4B national airborne command post aircraft sortied out of nearby Andrews Air Force Base in Maryland. These aircraft are essential tools when it comes to continuity of government and in assuring the resiliency of the nuclear deterrent. We do not know if the E-4B's mission is related to what is ongoing in nearby Washington, D.C., but they are supposed to launch under certain circumstances from their forward operating location at Andrews. They famously did so during the events of 9/11, for instance.

Regardless, the question of continuity of government is a very real one at this time, with personnel scattered about during this crisis. It isn't clear if any level of these plans have been enacted, but we do know key players have been moved to undisclosed and hardened locations.

Senator Jeff Merkley, an Oregon Democrat, has Tweeted that the Electoral College Ballots that were to be counted, certifying President-elect Joe Biden's win, were rescued from the floor of the Senate after protested breached the Capitol. He suggested that they could have been burned.

Pictures and video also show protests trashing equipment belong to The Associated Press outside of the Capitol.

Washington is now under curfew while thousands of people still remain in a face off of sorts with law enforcement. At the same time, the House Sergeant at Arms has declared the Capitol cleared of intruders.

On another note, an E-6B TACAMO 'doomsday plane' has been orbiting over the region. It isn't clear if this mission is related to the events in Washington. E-6s do regularly fly missions around the country from various forward staging points. In this case, though, the E-6 sortied out of MCAS Beaufort and flew to the central east coast region and has been flying in the area since. This area includes a track over Chesapeake Bay, Philadelphia, and Delaware.

The fog of war is thick surrounding the violence in the Capitol. The woman who was shot was reported deceased by CNN. Apparently, it remains unclear who pulled the trigger.

Meanwhile, across the country in the Pacific Northwest, pro-Trump protestors have broken onto the grounds of the Governor's Mansion in Olympia, Washington.

President Trump has also tweeted the following sentiment that is getting a tremendous amount of criticism considering the situation unfolding:

Mitt Romney has called the events an insurrection caused by the President:

Secretary of State Mike Pompeo, one of Trump's and MAGA's biggest official-level supporters, put out the following statement:

Trump's Acting Attorney General also put out a statement condemning the actions by some Trump supporters and warning about law enforcement action:

A picture has emerged showing members of Congress wearing hood-type emergency gas masks as they evacuate the Senate floor. The D.C. Metro Police Department had said that protesters had used "chemical irritants" to help them gain access to the building in the first place.

A picture shows that Capitol Police were also equipped with less-than-lethal launchers capable of firing tear gas rounds, among other ammunition types, but it's unclear if they ever employed them. The New York Times reported that at least some Capitol Police officers effectively stepped aside rather than confront the protesters after they made their way inside the building.

CNN has also reported that suspected pipe bombs were found at the headquarters of both the Democrat and Republican National Committees in Washington, D.C., as well as the Capitol grounds, but were all destroyed in controlled detonations.

There is also a picture that shows a protester holding what appear to be flex cuffs, or similar improvised restrains, but, despite suggestions that they might have been planning to take hostages, it's unclear what the exact intent might have been.

Senate Minority Leader Chuck Schumer, a New York Democrat, and House Majority Leader Nancy Pelosi, a Democratic Representative from California, have said that the plan is to resume the process of certifying President-elect Joe Biden's win tonight once the Capitol is determined to be fully cleared for use.

Retired General and Trump Administration Secretary of Defense weighs in with scathing statement:

The First Lady's long-time Chief of Staff has resigned:

The Electoral College certificates have been moved back to the secured Senate Chamber:

Special tactics team inside the Capitol as the session is about to reconvene:

Washington, D.C.'s local government has put out more alerts about the curfew that is now hours into effect:

Here is the statement from President George W. Bush:

Vice President Pence is now talking in the Senate Chamber.

Here is the security the members had as they entered the Capitol:

Reports state that Pence appears to have been calling the shots in terms of the security reactions to the events on The Hill:

Even the deployment of the National Guard seems to have been an issue from the very top of the chain of command:

All this puts into question the state of play of the chain of command at this time, at least to a certain degree.

D.C. under public emergency for the next 15 days now:

There is also a lot of talk about the 25th Amendment being discussed among senior staff at the White House. Until we have a primary, first-hand source come out about this, it is best to treat it as a rumor.

The video below, which is graphic, appears to show the woman being shot as she tried to climb through a window in a set of barricaded doors that led to the offices of the top congressional leadership. It is an incredible chaotic scene with police standing right next to the woman when she was fell to the ground:

A huge question that will need to be answered is just how this happened. Clearly, this was going to be a huge and very heated crowd. What failed in terms of preparations and protocols that allowed large groups of people to break into the Capitol? You can imagine how things could have turned out far, far worse if some of those folks were armed and had a far darker and well-coordinated plan. You can imagine a Mumbai like episode here with what appeared to be limited defenses against it even during a massive and historic protest.

The time it took for the National Guard to show up is also a huge question at this time.

The post-mortem on this thing, at least in terms of the security and defensive measures put in place, will be remarkable.

This is the Senate Parliamentarian's office:

It's done. At around 3:45 AM local time, Congress certified the Electoral College's vote and Joe Biden will be the next President of the United States. It was a destination we were going to end up at one way or another, it's just remarkably sad the detour that was taken.

Russia is already at it. Expect the full leveraging of this event by the Kremlin in the coming hours and days:

Trump's statement came shortly after the joint session ended. You can come to your own conclusions on this one!:

This is a new angle on the deadly shooting that occurred in the Capitol. Very strange scenario. Graphic video warning: