A recent photo taken of Groom Lake by a private pilot shows what appears to be a dagger-shaped object in one of the facility's aircraft shelters. 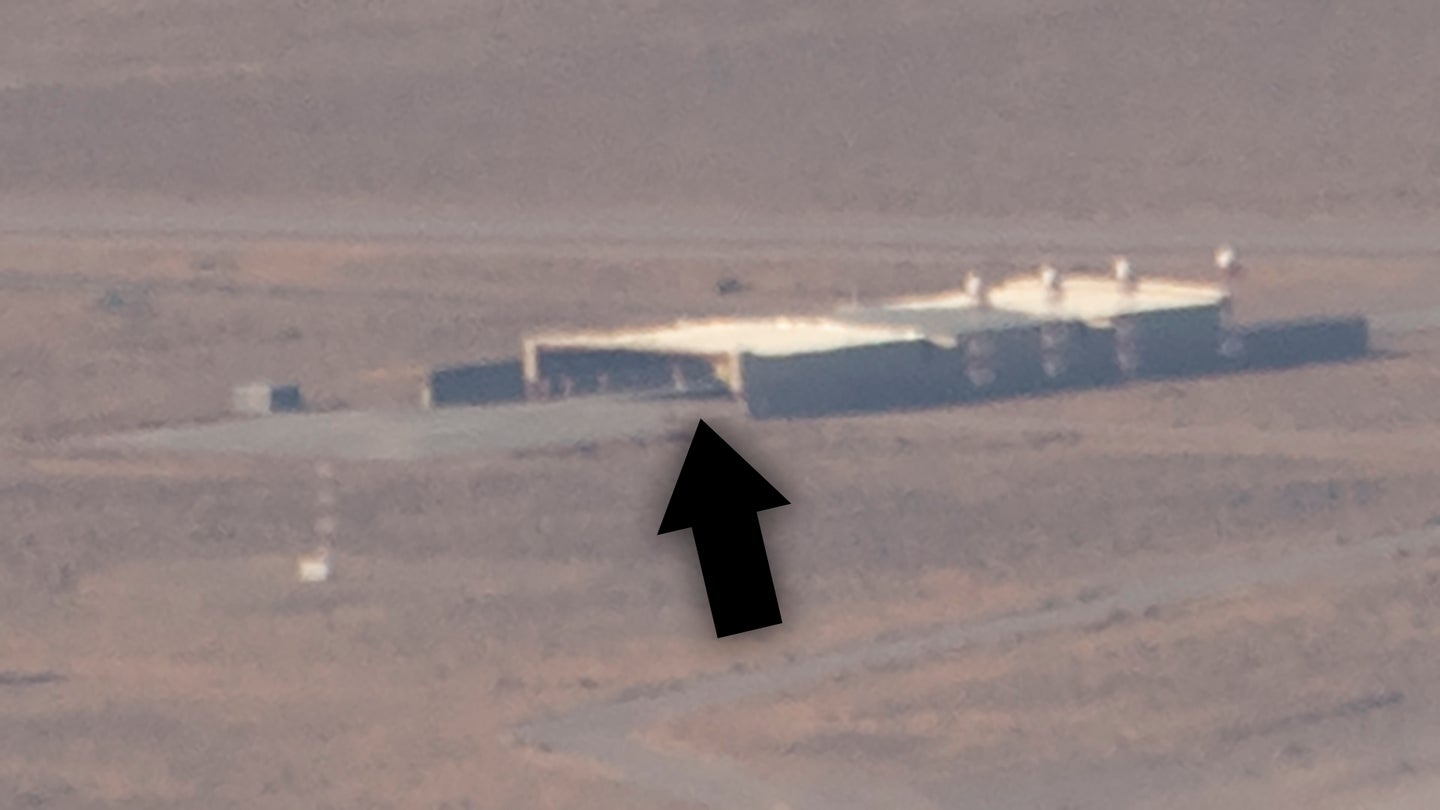 Private pilot Gabriel Zeifman, who has taken aerial shots of Area 51, also known as Groom Lake, the U.S. Air Force's famous clandestine flight test center in Nevada, as well as other shy installations, in the past and whose flights we were first to report on, grabbed new pictures of the facility on Christmas Day. Zeifman shared his latest batch of images with numerous outlets via a public link, which has drawn new interest in the base. Overall, they are very similar to past images, but they do include a particularly good view of an elongated hangar-like structure, known as scoot-and-hide shelter, which appears to have a strangely shaped object of some kind visible inside. We have received dozens of inquires asking about this object and the shelter that it sits in, so we thought we would address them in a new post.

Before we begin, we want to reiterate that Zeifman shoots these pictures from his small Cessna 150 while flying through tightly controlled airspace under the close supervision of air traffic controllers on the ground. You can see more of his photographs and learn more about how these flights are possible in these past War Zone pieces.

You can see a video of Gabe's latest flight out over the Nevada Test and Training Range (NTTR) below:

The shelter in question at Area 51, which measures 120-feet wide by 320-feet long, and has been identified in the past as Hangar 19, is situated along a taxiway that connects the base's main ramp area with its long-closed and extremely lengthy original runway. The taxiway continues on to the new active runway to the east. A hangar had existed at this location for years, seemingly back to the 1980s, but by around 2005, substantial additions were made to its north and south ends, effectively tripling its covered length. The next year, wall-like structures were added to either side of the expanded facility, the extensions of which are open on their lower sides. This walled configuration would further block the view of what was going on there not only from the main apron and the main runway, but from prying eyes on Tikaboo Peak a couple of dozen miles away.

By 2007, an expanded turn-around pad had been added to its southern end. As such, an aircraft could taxi into the shelter, engines running, and then taxi out, turn around, and head back through to the taxiway.

The structure is not really just a hangar in the traditional sense. Scoot-and-hide shelters help conceal flying test articles from prying eyes, most notably from satellites above. This also provides a site closer to the runway where personnel can perform last-chance checks and troubleshooting, as well as arming any explosives, while the aircraft remains concealed. For tactical aircraft, these types of checks are traditionally done at end-of-runway hammerhead areas on operational air bases, which are fully exposed—Groom also has those areas. Similarly, when the test aircraft lands, the shelter offers a place to quickly get it out of sight where it can be made safe before returning to its own assigned hangar under its own power or shut down and then towed back to its hangar at a more opportune time. It can also use the facility to be quickly turned around for another sortie.

By 2007, an array of four antenna towers, typically associated with unmanned aircraft operations, were constructed along the east side of the shelter, as well, indicating that it may have been used, at least in part, to support drone test programs. There are other similar arrays around Groom Lake. These specific towers are highly visible in Zeifman's latest pictures of the base, as well.

As for what is seen in the latest image showing the inside the open scoot-and-hide shelter, we really cannot say for sure. To our eye, it looks like a very low-slung dagger-shaped object, similar to the low-observable endcaps and some test articles that have been placed atop radar cross-section (RCS) testing poles at RCS test facilities, although this one has a rise towards its rear, which one could speculate may be a cockpit. So, could this object be a similarly shaped stealthy or high-speed test article? It's possible. If it is, it sits extremely low to the ground.

With that in mind, could it have been a vehicle damaged in a mishap and missing its landing gear? That may be a good reason to store it out in the scoot-and-hide shelter until it can be safely moved elsewhere, disposed of, or returned to flight.

We have to underline that this is just outright speculation and it could very well be something else entirely, including a component of a non-flying asset, such as part of a radar dish. The images do not have the resolution to conclude one way or another. So, we just don't know, although its odd shape is intriguing, which shouldn't be surprising, as most things that fly out of Groom under a secretive test regime look alien, at least historically speaking.

If we are to go down the rabbit hole in regards to the general shape that we think we are seeing here, at least based on the very limited photographic evidence provided, the closest thing we can find with regards to an actual known aircraft is the Martin Marietta X-24B lifting body. You can read all about this late 1960s initiative here. This program initially emerged out of a grander U.S. Air Force-NASA effort focused on exploring the concept of hypersonic lifting body shapes. This research, including the resulting X-24B, would go on to be used to study unpowered aerial vehicle designs capable of re-entering the Earth's atmosphere from space and then landing on a traditional runway, work that later informed the development of the Space Shuttle.

The X-24B flew into the mid-1970s, after which a follow-on initiative to build a hypersonic test aircraft based on lessons learned from the program emerged.

Lockheed was working on plans to do just that via the X-24C—a more powerful outgrowth of the X-24B. It would have been markedly larger than its predecessor and was designed to achieve hypersonic speeds (in excess of Mach 5) at high altitudes using a ramjet or scramjet engine. The L-301 design eventually evolved out of that initiative alongside a number of additional derivatives, before the program was called off due to funding limitations—at least that is what the public record says.

There are unsubstantiated claims that this program actually morphed into a highly classified one, code-named Copper Coast, which flew secretly out of Area 51 during the 1980s. Regardless, certainly, advanced research into hypersonic flight has never fully stopped and there are likely numerous high-speed flight test programs leveraging exotic test vehicles that have occurred at the base over the decades.

Fast forward to today and there are a ton of ideas from decades past that have been re-leveraged as part of the flat out race for hypersonic superiority that was kicked off in the last half of the previous decade and is only maturing now. The shapes that NASA and the Air Force came up with in the 1960s still remain relevant today and have likely been leveraged in additional research. Beyond that, hypersonic parasite aircraft have long been rumored to have been a part of research and development programs at Area 51. That capability has also taken on a new emphasis in the current age of peer competition and we speculate such a mothership-type aircraft that could launch a smaller extremely high-speed aircraft or space-access craft could potentially be intended to call the new tall hangar at the southern end of the base home, if indeed that program is still underway.

When it comes to high-speed experimental planes that may exist today, we also know the Skunk Works was looking to test an F-22-sized hypersonic demonstrator that leveraged combined-cycle engine technology slated for its SR-72 concept as soon as 2018. That is if the option to do so, which supposedly would cost less than $1B to realize according to then-CEO of Lockheed Martin Marilyn Hewson, was executed when it was first openly discussed. That aircraft would have to feature an elongated, dagger-like profile, as well.

Once again, this is all just interesting background and is not in any way conclusive in regards to what the object is that we are seeing in the photos.

We also must underscore that it shouldn't be a surprise that aircraft exist inside most of the covered aircraft facilities available at Groom. In fact, if anything, most indications point to a chronic lack of space for both ongoing projects and those that are already served their purpose. Oftentimes, test articles are only built for very limited amounts of flight time. Once they have served their purpose, they are stored or disposed of, and literally burying old projects in the ground around Area 51 is said to have occurred as a secure way to make up more space at the high-demand facility.

The base's constant expansion, which has seen no less than three massive hangar projects executed in the last decade and a half, along with many smaller projects, is an even more concrete indication of the need for further aircraft storage space for the clandestine flight test facility. The latest hangar expansion, which The War Zone was first to report on, is similar in some regards to the scoot-and-hide shelter, although on a far grander scale. It too had large portico-like extensions put on both sides of an existing hangar facility that dated back decades. This massively increased its concealed square footage allows for unique operational flows that the original hangar facility could not provide.

It is also possible that the hangar is being used to support a single program, or at least store test articles related to that program, if it isn't needed for concealing various aircraft during ongoing test operations. Once again, hangar space is thought to be limited at the base, so using at least part of the scoot-and-hide facility for storage or to support a singular program isn't out of the question.

One puzzling part of this story is that the scoot-and-hide shelter does close via a set of overhead doors on each end—not via outward-swinging doors, as some have confused with the wall-like screens on either side of the facility. Why it remains open is unclear, although it could point to it being used operationally when the images were taken or to the possibility that whatever is inside just isn't that big of a security risk to leave exposed if the doors are no longer operational for whatever reason. That being said, it is very unlikely that the facility was being used for operational flight testing on or just before Christmas Day, as activities on the base usually wind-down in advance of major holidays. Gabe's presence nearby is also another indication that flight testing activities were more or less nonexistent at the facility when the images were taken.

So, as it sits now, this like so many other things Area 51 related remains of a mystery, and we may never find out if an aircraft that matches the odd description of what we are seeing in the photos above ever even existed at all.

That is one of the grand features of Area 51 and the opaque veil of secrecy that has been carefully draped around it over the past six decades of its existence.