The first training event of its kind provided a high-end finale for the F-35A student pilot syllabus. 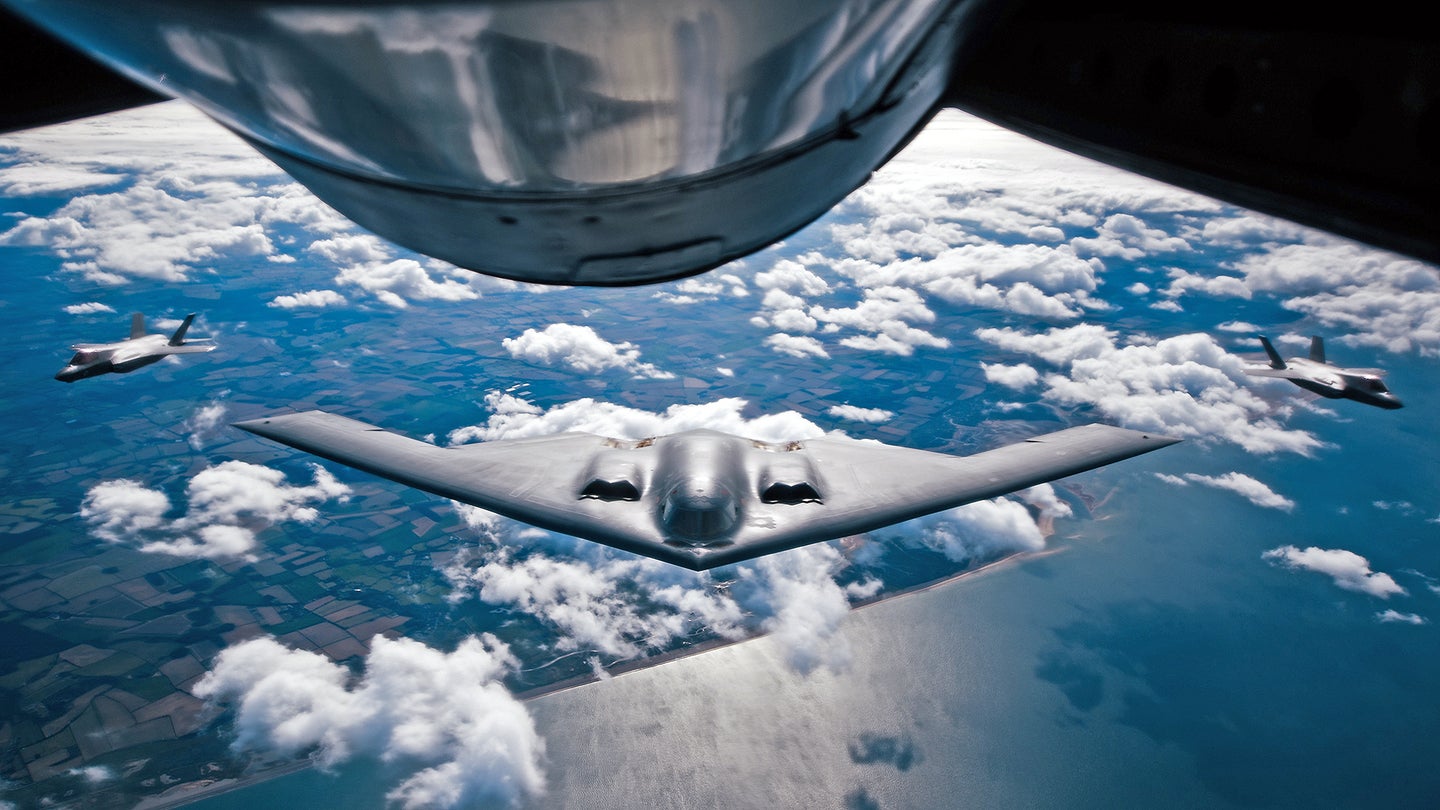 The U.S. Air Force has revealed details of an exercise involving ten F-35A Lightning II fighters working alongside a pair of B-2 Spirits. It marked the first time that the stealth bombers have teamed up with Joint Strike Fighters from the training establishment at Luke Air Force Base, Arizona. During the mission, the stealth team fought its way through simulated enemy air defense threats, with the F-35s dropping weapons in the process. The maneuvers exposed F-35 student pilots to real B-2s, rather than the virtual simulations that have been used to represent the bombers in training up till now.

Known as Panther Capstone, the joint training mission brought together F-35As from the 63rd Fighter Squadron “Panthers” at Luke Air Force Base, and two B-2s assigned to the 509th Bomb Wing, Whiteman Air Force Base, Missouri. The F-35 pilots comprised six instructors and four students preparing to graduate. Although the training event took place on November 18, 2020, details have only been released now.

“This was a first-time event for Whiteman’s B-2s integrating with Luke’s F-35s,” said Lieutenant Colonel Christopher Diller, 509th Bomb Wing program manager, and B-2 pilot. “As the number of F-35s increase, the understanding and interoperability between the various platforms must increase. What better way to facilitate this than at the capstone event at the F-35 schoolhouse?”

The 63rd Fighter Squadron mission is to train U.S. Air Force student pilots on the F-35A and, although part of a six-nation F-35 schoolhouse enterprise at Luke, the unit only provides its basic course, or B-course, syllabus to U.S. Air Force candidates. The eight-month B-course teaches F-35 lead-in graduates everything from how to take off, navigate and land the jet, to flying air defense missions and attacking ground targets. It is then followed by mission qualification training with an operational F-35 unit.

The move to add live training with the B-2 to the finale of the F-35A B-course syllabus reflects Air Force plans to have the two low-observable (LO), or stealthy, assets work together in contested airspace — using their respective attributes to defeat the air defenses of a potential peer or near-peer enemy.

With that in mind, Panther Capstone involved an offensive counter-air mission, with the F-35s and B-2s flying as an attacking team that took on “multiple advanced adversary air and surface-to-air missile threats,” according to an Air Force press release. It was not revealed whether any live Red Air threats were present in the form of Air Force or contractor-operated aggressor jets.

The F-35s dropped weapons during the mission, “to soften the target areas for the B-2s,” according to the Air Force. F-35 student pilots are required to drop inert munitions as part of their B-course. During the training mission, they also “pressured enemy air defenses,” which is a key role for the Joint Strike Fighter, and escorted the bombers to deter enemy aircraft.

“The F-35 was built to be able to escort low-observable assets like the B-2 into highly defended territory in order for them to be able to hold targets at risk,” explained Captain Sean Gossner, a 63rd Fighter Squadron instructor pilot and flight commander. “We finally got to practice this with real B-2s for the first time at Luke Air Force Base with the Panthers.”

“Typically, we train for LO escort by using simulated assets that are not actually airborne with us, which leads to various training limitations,” Gossner continued. “To be able to bring together everything with 10 F-35s and two B-2s against a robust air threat picture and surface-to-air missile threat picture was incredible training for us.”

While synthetic training, either in simulators or in embedded virtual-constructive training scenarios, is becoming an ever-more powerful and important tool, this is counterbalanced by the limitations inherent in non-live flying: in particular, the lack of adrenaline or “fear factor” inherent in real-world scenarios. Introducing real B-2s to a B-course mission addresses this, but also provides useful training for the stealth bomber crews, too.

As well as integrating with the B-2s in the air during Panther Capstone, the 63rd Fighter Squadron pilots took part in mission planning with the B-2 crews at Whiteman Air Force Base, helping figure out the best way to deal with threats and other tactical problems, for an added layer of realism, reflecting how composite air operations would be planned on the front line.

Gossner added that the 63rd Fighter Squadron is the only F-35 unit at Luke “with the ability to integrate with the B-2 in this capacity,” suggesting that training alongside the secretive stealth bomber is not an option available to the foreign-manned units at the base.

How the F-35s and B-2s actually communicated with each other during the mission is unclear, but the ability, or lack of, to align stealthy data links is also a matter of growing concern for the U.S. military, reflected in recent experiments involving the XQ-58 drone an “airborne translator” between the F-22A Raptor and F-35, which you can read about here.

The F-35 uses the stealthy Multifunction Advanced Data Link (MADL), while both the F-35 and the B-2 have Link 16 connectivity, although it is not stealthy and can compromise the aircraft's cloak when used in a two-way, non-receive only manner. The Air Force plans to integrate the MADL onto the B-2, but it is unclear how far these efforts have progressed.

The training mission also reflects a broader desire within the Air Force to bring together different stealthy aircraft as it seeks to further enhance the kinds of high-end capabilities that would be needed to penetrate into denied areas, as well as suppression and destruction of advanced enemy air defenses. Earlier this year, examples of the F-35A, F-22, B-2, and the ultra-secretive RQ-170 Sentinel stealth drone, basically the USAF's disclosed stealth force, all took part in the so-called Large Force Test Event (LFTE) at Nellis Air Force Base in Nevada. You can read all about that effort in this previous

As for the four B-course pilots who will hopefully graduate after Panther Capstone, they will arrive with their operational units having benefited from the type of high-end training that only live flying can provide. Working alongside a unique strategic asset like the B-2 will undoubtedly help prepare them for integration with other stealth platforms and the Air Force has confirmed its aspiration to run similar training events for its F-35 pilots in the future.