While it’s long been a fixture of naval aviation, recently relaxed Air Force rules mean its flyers now have some of the coolest helmet art we’ve seen. 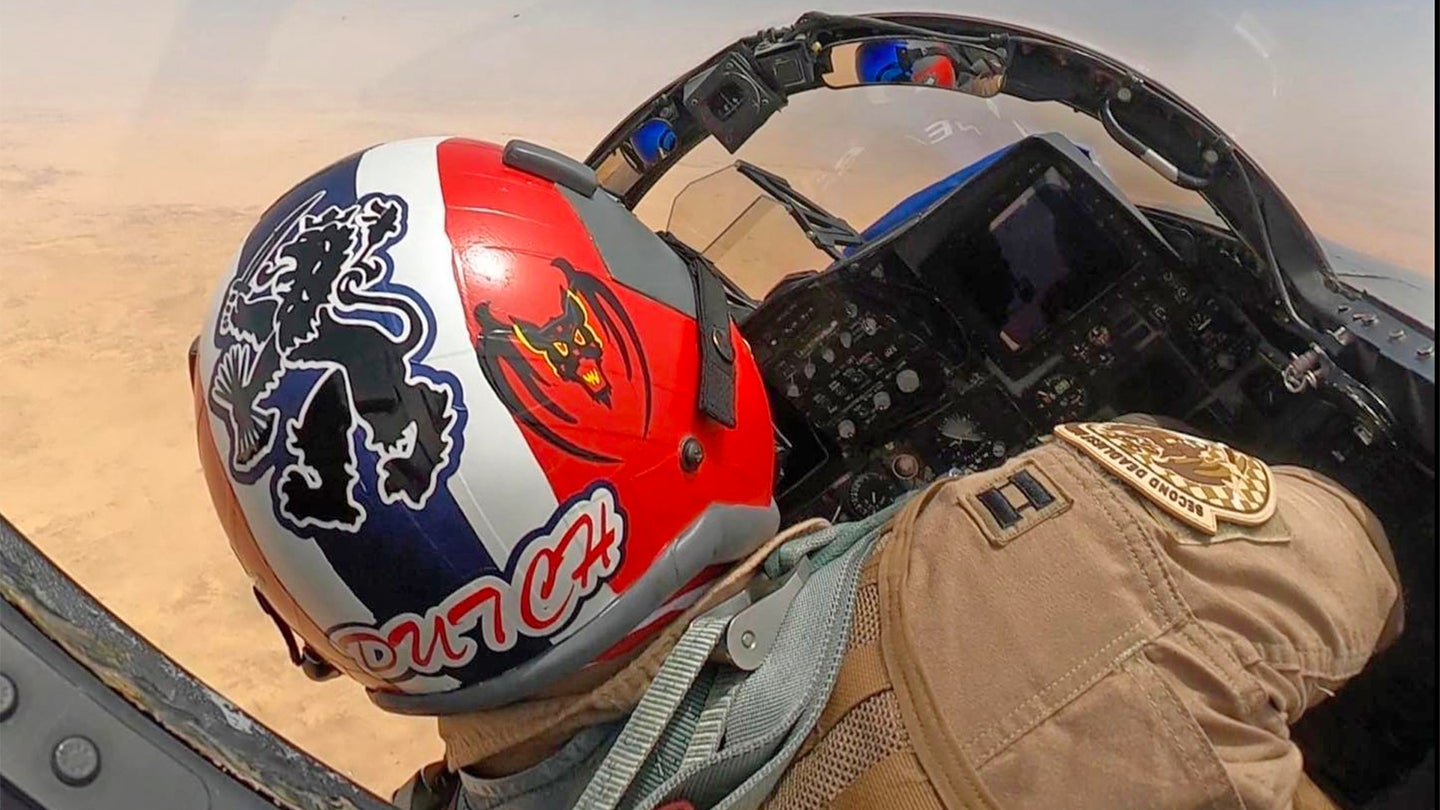 U.S. Air Force pilots are creating incredible personalized artwork to adorn their flying helmets. Previous strict USAF rules regarding any changes to flying helmets have been relaxed as part of a push to improve morale in squadrons and empower the more junior ranks. The result is some stunning helmet wraps that are now appearing in increasing numbers throughout the Air Force. These helmet decals are often designed to represent an individual squadron or airframe and foster esprit de corps among the aircrews that wear them.

Disgruntled officers approached then USAF Chief of Staff Gen Dave Goldfein in 2019 to seek his blessing to implement changes in regulations as part of the wider bid to help improve squadron culture and morale, thus helping to address a serious issue with retention. U.S. Naval aviators have traditionally customized their flying helmets with reflective tape, callsigns, and squadron emblems, but USAF aircrews have been prohibited from doing so in recent years due to specific Air Force Instructions, or AFIs.

In fact, the only USAF aircrews officially allowed to apply any sort of artwork to their flying helmets were those assigned to the Air Force Demonstration Team, better known as The Thunderbirds, and from aggressor units, the latter of which were permitted to apply a small red star to their helmets. So, aircrews took their argument directly to General Goldfein, who was supportive. The official regulations would take time to change, however, the wheels were set in motion.

Initially, personnel at Holloman and Eglin Air Force Bases started working with their Major Commands (MAJCOMs) in order to receive a waiver that would mean they could bypass the official regulations. It was seen as something of a rebellious movement initially, but an increasing number of MAJCOMs issued year-long waivers that allowed the practice to continue. In fact, over 20 squadrons are now thought to be actively engaged in applying helmet wraps.

A-10C Thunderbolt II pilots at the 23rd Fighter Group at Moody Air Force Base, Georgia, started using helmet wraps in early 2020 in a bid to “help increase morale and keep pilots, aircrew flight equipment specialists and crew chiefs connected to the rich history of the ‘Flying Tigers,’” according to a USAF news release.

“There's a lot of pride that goes along with it,” said Air Force Captain Jonathan Swift, the 23rd Operations Support Squadron (OSS) Aircrew Flight Equipment (AFE) flight commander. “We’re a part of the 23rd Fighter Group, a very historic unit within the Air Force. There's a lot of heritage that comes with that. So there's a strong connection between putting these wraps on the helmet and that heritage that we all share.”

“These helmet wraps are emblematic of the pride we feel in who we are, what we do, how good our predecessors were and how well we continue to do our mission,” said Air Force Colonel Ryan Haden, the 23rd Fighter Group commander. Haden noticed a growing interest in helmet wraps around the Air Force and jumped at the opportunity to implement them for the 23rd. Captain Swift coordinated with a local graphics and commercial printing company to design, print and form the wraps to the HGU-55/P helmet.

The 494th Fighter Squadron, the “Mighty Black Panthers,” at RAF Lakenheath in the United Kingdom was the first unit within the United States Air Forces in Europe (USAFE) MAJCOM to start adding wraps to aircrew helmets. “There are a lot of rules and paperwork that you need to go through even though you have approval from top generals,” said an F-15E pilot from the unit, identified only as Captain “Rogue.” “I saw the whole story of the helmet wrap initiative and took it upon myself to start writing a waiver to send up the chain to the USAFE MAJCOM — we were the first USAFE squadron to try anything like this.”

“Rogue” says the waiver hit roadblocks early on as some fellow officers in other departments simply weren’t aware of the initiative. “The irony was that while top generals had said yes, those in the units still had rules to follow and good reasons to say no. However, as we started to work through the details our Operations Support Squadron [OSS] commander, who essentially owns the Aircrew Flight Equipment [AFE] shop, agreed to the plans.”

“The issue is that the fighter squadron doesn’t technically own our flight gear. We — the aircrew— don't own our helmets. While they are custom fitted to us and you are pretty much tied to that helmet, it’s not technically yours. The biggest hurdle was making sure the proposed wraps didn't somehow damage the helmet. In fact it’s quite the reverse, it actually helps to protect it.”

“Once our OSS signed off the waiver, it went via our Operations Group commander and up to USAFE for approval. It’s great that the air force has agreed to trust us with this. There was a lot of back and forth on the actual details in the waiver, mainly the fine detail regarding which parts of the helmet can be covered by the wrap, and which parts cannot. Certain areas of the helmet are more prone to cracking, so they need to be available to be visually inspected. The wrap cannot go under the visor, and it can’t go onto the Joint Helmet Mounted Cueing System [JHMCS] part that is added to the standard HGU-55/P shell. Different MAJCOMs have different waivers, and this is an evolving project.”

At Lakenheath, one of the biggest concerns was that the custom wraps might make aircrews more easily identifiable if they are deployed on combat operations. “That was well founded, but we mitigated the risk by only allowing the callsign at most — so it’s actually not that big of a deal.”

The 494th Fighter Squadron approached commercial car wrap firms in the local area and eventually found a company that could look after the design and manufacturing process. After some tests and a lot of careful refinements of measurements the first helmet wrap was completed earlier this year. “We now have close to 20 custom flight helmets in the squadron,” explains “Rogue,” adding that some aircrews have been hesitant to follow the trend. “If we go on operations it's down to the deployed wing commander to decide whether or not we can fly combat missions with the wrap. If they said no then we can easily peel them off.”

So, what’s allowed and what isn’t? For the 494th, “Rogue” is the aptly designated approval authority. “We are going to remain very cautious, we don't want to ruin the trust that has been put in us. Each squadron has their own guidance, and ours is that the design can be whatever the individual wants it to be, but it must be in good taste. The company puts together the design for us based on our sketch. The guys love it. We have a pilot in the squadron with the callsign "PInball." Her helmet has an incredible chrome effect wrap. I just got my helmet done and it’s a Black Panther with a big claw rip effect.”

While some squadrons are using local firms to wrap their helmets, Brad “Scooby” Hunt has started Nugget Wraps, a company specializing in a bespoke service. Hunt told The War Zone that his motivation was to help improve morale among fighter pilots. “I tried to find a local company to wrap a helmet, but they either said no or it turned out terrible. So, one weekend I decided to try to figure out how to do it for myself. I looked at how the Navy does it, and it’s actually not a single piece, they use adhesive strips. So I went to a car shop and got some red, white and blue vinyl, and wrapped my first flying helmet.”

“More guys saw what I’d done, so I started to develop the technique and it grew from there. It took a few weeks to figure out how pilots could do it for themselves, so I nailed down the process and now if they order from me they get a video and PDF instructions for how to apply the wrap. Someone message me with details like their callsign and a theme they might like, and I can put an idea together for them. Others have sketched out the entire design. I do a quick mock-up, they will have a few tweaks, and we roll from there.”

The Nugget Wraps kit includes a base color of strips, and printed decals that are then applied — all in the type of hard-wearing vinyl that is used in car wraps or on commercial airliners. The do-it-yourself helmet kit can be mailed to the aircrews to apply themselves. Hunt says he is expanding into other areas and has just started doing vinyl printed A-10 ladder door art.

The helmet wrap phenomenon is gathering pace — and the feeling in the USAF pilot community is that this really is going to become a big thing. The initial one-year waiver that was granted by the MAJCOMs expired in October 2020, but this has now evolved into an indefinite waiver that will last until the official regulations catch up.

The USAF’s F-15, F-16, F-22, and A-10 squadrons, as well as a growing number of other air forces, are going all-out on helmet wraps. The craze has already expanded into bomber squadrons and other communities within the USAF are following suit.

F-35A pilots are trying to get waivers, too, but their helmet is significantly different and doesn’t come under the same waiver as the HGU-55/P and JHMCS. It remains to be seen if the highly-expensive F-35 Gen III Helmet Mounted Display System (HMDS) will be granted approval for similar eye-catching treatment, but word on the street is that it’s only a matter of time.

Whether or not F-35 pilots are approved to adorn their noggins with similarly impressive wraps, it's the latest craze for USAF fighter pilots, and looks set to grow and help perpetuate that feeling of camaraderie and squadron culture that the USAF has been working so hard to promote in recent years.