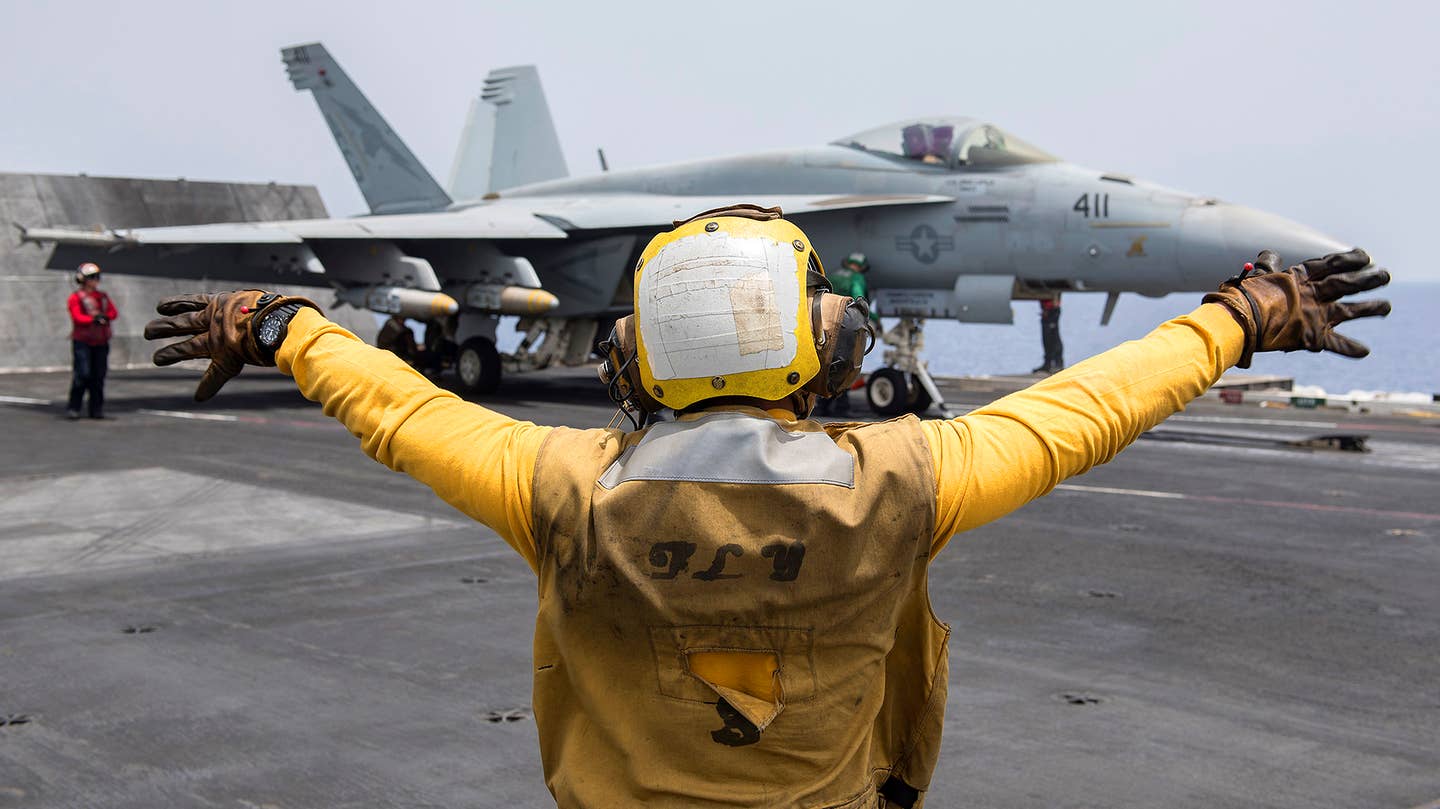 Under seemingly unrelated deployments, the US has moved a lot of heavy-hitting weaponry into the European theatre in the recent days. This includes B-52Hs that are being forward deployed to RAF Fairford for exercises over Europe and Africa, P-8 Poseidons that have arrived in Germany, and a full-on Carrier Strike Group operating in the eastern Mediterranean.

The Harry S. Truman Carrier Strike Group, which includes the USS Harry S. Truman, three destroyers, a cruiser, and a fast attack submarine, has moved into the Mediterranean to take on ISIS from the west. Although such a strategy seems logical, it has been rarely executed by the Navies of the anti-ISIS coalition. In fact, it's the first time an American Carrier Strike Group has flown strikes from the region in 13 years.

Although a French-led multi-national flotilla did execute some operations from the Mediterranean for a short time following the Paris terror attacks, the carrier Charles De Gaulle and its escorts were quickly moved to the Persian Gulf.

America’s anti-ISIS air campaign plugged along for nearly a year before Turkey opened up its airspace and basing for coalition aircraft last July. Yet even before that occurred, America’s carrier-based air power never took advantage of western access into Syria, and has been relegated to operating solely from the Persian Gulf for the operation. Once Russia became heavily involved in the Syrian conflict last Fall, access to Syrian airspace, via directly flying over the country’s western shore, became a non-option.

It wasn't just the Russian fighters’ presence that caused this. Russia’s deployment of Slava-class air defense cruisers equipped with S-300 surface-to-air missiles off the Syrian coastline shortly after ramping-up air attacks out of their airfield south of Latakia, Syria, greatly complicated the airspace situation. Then, a Turkish F-16 shot down a Russia Su-24 along the Syrian-Turkish border, sending Russian-Turkish relations (and NATO-Russian relations, to a certain degree) into a tailspin. Russia’s subsequent deployment of its advanced S-400 air defense system to their base near Syria’s western shore resulted in a seemingly abrupt end to any coalition air combat operations that included manned aircraft over western Syria.

Although Russia still maintains its airbase in Latakia, supposedly including its S-400 air defense system, the Sukhoi fighter and attack jets that once packed the base are gone, as is Russia’s air defense picket ship that was once stationed off Syria’s central coastline. Russia’s much reduced presence in western Syria has likely paved the way for the air strikes being conducted by the USS Harry S. Truman today.

In doing so, it opens another front on America’s war on ISIS—one that could take the place of Turkish basing if Ankara’s hospitality turns sour. Although it's likely that the Navy’s Hornets, Super Hornets, and Growlers are still flying over Turkish airspace to circumnavigate Russia’s defenses, this could change if Turkey were to close its airspace to coalition aircraft.

The idea that Turkey would pull US basing for the anti-ISIS campaign sounds strange considering the country’s NATO affiliation, and the threat that ISIS poses to its people, but it is possible considering recent events.

The US is actively backing Kurdish YPG and YPJ fighters in northern and eastern Syria. These are the same PKK-affiliated groups with which Turkey is actively at war, and that war is a bloody one. Just recently, PKK militants shot down a Turkish Cobra attack helicopter, and Turkish fighters have been bombing Kurdish installations just as they've been bombing ISIS ones since the first day of airstrikes after joining the US-led anti-ISIS air campaign.

Making things more complicated, a photo recently surfaced of a US special forces operator wearing a YPJ patch while operating alongside Kurdish units in Syria. The YPJ is the PKK’s female military combat corps, which is a battle-hardened force that has proven to be among the most effective and brave when it comes to fighting ISIS. This enraged Ankara, and the Erdogan Administration, which is already walking a fine line by playing ball with American basing requests while still showing that it draws a hard line when it comes to fighting Kurdish “terrorists.”

The presence of a Carrier Strike Group in the eastern Mediterranean, along with B-52s in England, also sends a strong message to Russia, whose Navy has had a greatly increased presence in the region. It also puts the American flotilla on the doorstep of Russia’s long-held port in Tartus, Syria, their only Mediterranean naval facility.

As Russia’s Black Sea Fleet continues to be modernized and strengthened, it will become an even more permanent fixture in the Mediterranean. Russian live-fire exercises and other war games and airspace closures in the area have also become a near-constant reality; even as a the Truman Carrier Strike Group plows the shores off Syria, a Russian torpedo drill is supposedly underway nearby.

As the Cold War taught us, the Mediterranean can become a crowded, volatile body of water. Now, with an American supercarrier sitting off of Syria’s shore, and between Russia’s naval forces and its port in Tartus and airbase near Latakia, Syria, there will likely be some response from Moscow.

Part of this response could include Russia sending its only carrier (albeit one with questionable viability) the Admiral Kuznetsov, and its flotilla, which included tugs on standby to tow the carrier when it breaks down, to the same eastern Mediterranean operating location.

Rumors about this deployment already exist, but now that the US is freely operating in the area it seems like such a deployment would become more of a priority. Still, one has to take reports of the Kuznetsov deploying with a grain of salt, since the carrier always seems as if it's about to be sent to face off against US interests, at least according to sensationalist news sites and the Russian media itself. It's very possible that the carrier will remain in port for repairs and upgrades for the foreseeable future, after which it will premiere its new MiG-29K fighters, as has been stated in the past. Either way, we'll probably know in the coming weeks.

Even if the Kuznetsov doesn't enter the Mediterranean anytime soon, other Russian vessels, many of which were built almost exclusively for sinking US carrier strike groups, likely will.

One thing is certain: after decades of declining prominence, the Navy’s Sixth Fleet is beginning to play a much more strategically important role in America’s foreign policy. Beyond having at trio of forward-deployed destroyers at its disposal, Carrier Strike Groups are now flying combat missions under its umbrella, and that fact alone will shift the strategic paradigm in the region.