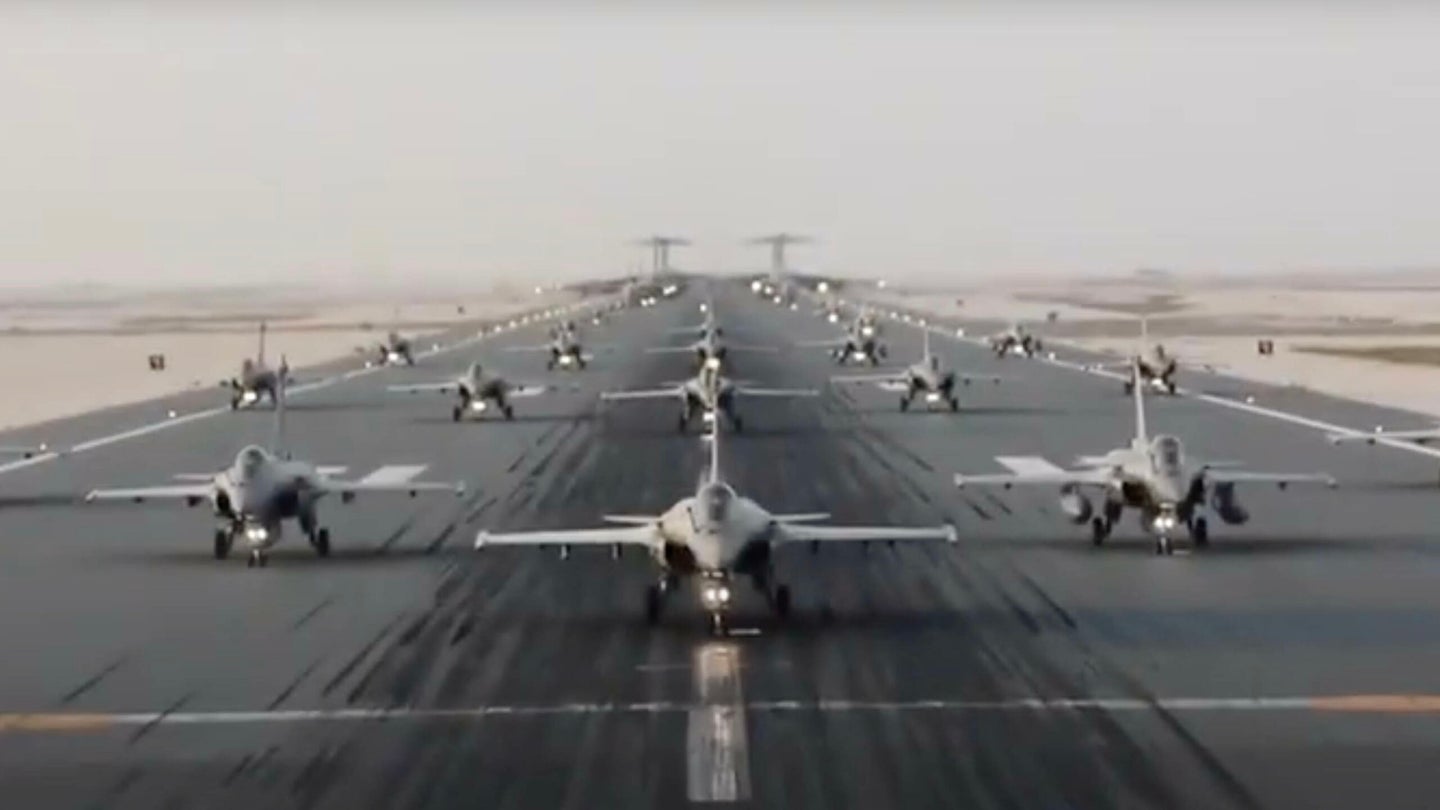 The Qatar Emiri Air Force, which finds itself in the midst of an extraordinary period of expansion, has staged an impressive “elephant walk,” involving everything from frontline fighter jets to fixed-wing transports and support helicopters. The video also shows, apparently for the first time, an AGM-114 Hellfire missile launch by the service’s recently delivered AH-64E Apache helicopter gunships.

The video, which bears all the hallmarks of being an official Qatar Emiri Air Force (QEAF) production, appeared on YouTube recently, but it’s not clear exactly when it was produced and nor is it immediately obvious where it was filmed. the Qatari “superbase” at Al Udeid — which also houses a significant U.S. military presence — is an obvious candidate.

The concept of the elephant walk is by now familiar from various U.S. Air Force readiness drills that involve the generation of a massive number of sorties, and these have included diverse types such as the F-15C/D Eagle, F-22A Raptor, and the F-35A Lightning II.

Sometimes, elephant walks involve mixed aircraft types, for example, the one launched by Osan Air Base in South Korea that featured the resident F-16s and A-10s. The U.S. Marine Corps has also got in on the act, with its CH-53s and MV-22s, and foreign air forces, too, are increasingly using these impressive shows of force to practice generating multiple sorties simultaneously, displaying a level of readiness that could be utilized during a full-blown crisis.

What’s impressive about this Qatar Emiri Air Force (QEAF) exercise is not just the sheer number of individual airframes involved, but also the variety of different aircraft types. In the United States, we’ve seen co-located F-22s, KC-135s, and C-17s team up for an elephant walk, as well as an unusual combination of B-52s, KC-135s, and an RQ-4B Global Hawk drone together with a U.S. Navy MH-60S Seahawk helicopter and MQ-4C Triton drone. Meanwhile, the Qatari iteration involves Dassault Rafale multirole fighters, C-17 and C-130J transports, plus AH-64E and AW139 helicopters, drawn from all three of the QEAF’s airbases.

You can see the video in its entirety below:

As well as seeing these aircraft taxiing out and lining up on the runway, the footage includes aerial action sequences, including formation flying, delivery of cargo and paratroopers, and the live-fire of the Hellfire missile.

The video opens with the Rafale, which is currently the most advanced fighter jet in service with the QEAF, although it’s soon to be joined by the F-15QA, described as the most advanced Eagle to date and an aircraft that you can read all about in detail here. Remarkably, Qatar has three new fighter types on order, with additional Rafales to be joined in the future by Eurofighter Typhoons, on which Qatari pilots are already training, as well.

The Qatari order for the French-made Rafale dates back to 2015 when an agreement was reached for the QEAF to acquire 24 examples, split between 18 single-seat EQ and six twin-seat DQ variants, together with associated weapons produced by the European missile consortium MBDA, at a total cost of around $7.05 billion. Although not confirmed, reports suggest that the Qatari weapons package includes SCALP-EG conventionally armed cruise missiles, Meteor beyond-visual-range air-to-air missiles (AAMs), MICA IR and MICA EM AAMs, and possibly Exocet anti-ship missiles. Unusually, Qatar specified the Lockheed Martin AN/AAQ-33 Sniper targeting pod and the Israeli Elbit TARGO II helmet-mounted cueing system for its Rafales.

The first five Rafales for the QEAF arrived at the newly established Tamim Air Base on the western coast of the Middle East peninsula in June 2019. In the meantime, Qatar exercised an option to buy 12 more Rafales in 2017, which will bring the Qatari total to 36 aircraft. Combined with the 36 F-15QA and 24 Typhoon jets on order, the QEAF is rapidly heading from being a relatively modest air force to one of the most powerful in the region.

Next up is the AH-64E, wearing the QEAF’s unique desert camouflage scheme for the type. The Apache Guardian, as it is also known, is another recent, high-end addition to the QEAF. An order for 24 of these attack helicopters was announced in 2014, together with three Boeing 737 airborne early warning and control (AEW&C) aircraft, although plans to acquire these have since been shelved.

The U.S. Defense Security Cooperation Agency notified Congress of a proposed $3-billion Foreign Military Sale of 24 AH-64Es to Qatar back in 2012. The DSCA stated at the time that the deal would also include up to 576 AGM-114R Hellfire II missiles, 295 FIM-92H Stinger Reprogrammable Micro Processor (RMP) Block I Missiles, and 4,092 2.75-inch Hydra rockets.

The first Qatari AH-64E was handed over during a formal ceremony at Boeing’s Mesa production plant in Arizona in March 2019 and, at the time, deliveries were scheduled to be completed last summer, although it is not clear whether or not this happened. In its final guise, the Qatari Apache order was valued at $2.44 billion and the country also has options for up to 24 additional examples. These rotorcraft mark a considerable advance over the Aérospatiale SA342L Gazelle that was previously used in a close support role.

Another modern type, the Leonardo AW139 is a medium-sized twin-engined helicopter that’s used for a variety of roles within the QEAF, 21 examples being employed for utility, troop transport, search and rescue, border patrol, and special forces operations. The AW139 was also recently adopted by the U.S. Air Force, which is in the process of acquiring 84 examples of the MH-139A Gray Wolf variant, which you can read more about here.

The QEAF transport arm is represented in the video by C-130Js and at least six C-17s, which serve with the Transport Wing based at Al Udeid. In all, the QEAF has eight C-17s and four C-130Js, which provide an air mobility capability that was previously absent. Uniquely, one of the C-17s is painted in full Qatar Airways livery, rather than military camouflage, but it was apparently not involved in the elephant walk. The civilian-looking C-17 emphasizes the type’s use for humanitarian and disaster-relief missions, on which it has been heavily engaged. The Qatari Globemaster III fleet also includes the very last example to roll out of the Long Beach, California, factory in 2015.

After we see Rafales and C-17s taxiing on parallel runways, the perspective of the video switches to a view down the runway, revealing a spectacular line-up of at least 18, and possibly more, Rafales, followed by the C-17s. Further along the runway, ahead of the Rafales, are three AW139s and four AH-64s, which would have departed before the fixed-wing types.

The aerial sequences include a four-ship formation of Rafales, accompanied by an example of their predecessor, the Mirage 2000, and the Hellfire launch by the AH-64E, followed by a demonstration of the low-altitude parachute-extraction system (LAPES) airlift delivery method by a C-17, while paratroopers leap out of a C-130J.

Energy-rich and increasingly active on the world stage, Qatar is rapidly reorganizing its armed forces and, in the process, the QEAF is growing from a single fighter squadron, a small transport wing, plus several helicopter units, to one of the most capable air forces in the Middle East. This is all happening despite accusations of Qatar supporting terrorist groups, which led to a diplomatic crisis beginning in 2017, when Saudi Arabia, the United Arab Emirates, Bahrain, and Egypt, among others severed diplomatic relations with the country and instituted a regional blockade against it.

All in all, the video provides a dramatic indication of the strides toward modernization and expansion that have been made by the QEAF in recent years. What’s even more impressive is the fact that this growth is still underway and with the forthcoming delivery of both F-15QA and Typhoon jets, plus more Rafales, the fighter fleet alone will more than triple in size in the years to come.

The exercise demonstrated the ability to quickly shift command and control tasks to a base in the United States, if necessary.