Nigeria’s MiG-21 Fighter Jet Force Is Up For Sale

Nigeria’s Cold War-era Fishbed jets are up for grabs after many years of being grounded. 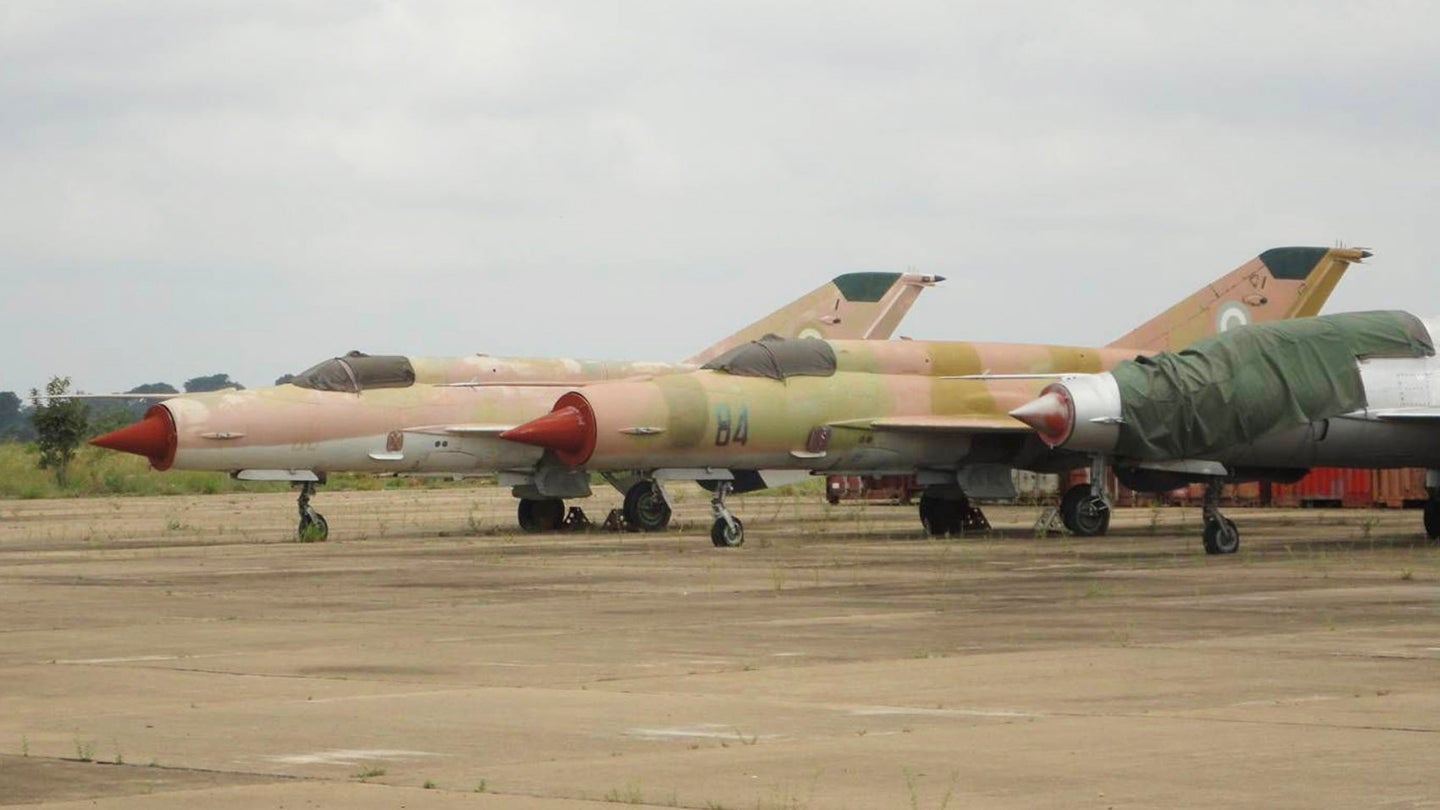 Twenty Soviet-made MiG-21 Fishbed jet fighters are being advertised for sale online. The jets, which apparently comprise the Nigerian Air Force’s entire remaining Fishbed fleet, are described as being in a “used” condition and are offered together with 15 “new” engines, as well as spares.

The offer, posted on the trade-a-plane.com website, is being made by the Inter Avia Group, which is based in Nevada. No prices are listed for the jets, the vendor instead requesting that any interested customers contact them directly for more information.

An accompanying photograph, seen at the top of this story and below, shows a line of out-of-service MiG-21s that clearly display the colors and insignia of the Nigerian Air Force (NAF).

The various jets have apparently seen relatively little use, with the MiG-21bis having between 34 and 169 flying hours on each airframe, while the MiG-21MFs have between 250 and 469, according to the listing. Finally, the two-seat models have accumulated between 199 and 547 hours each.

The performance specifications, as provided by the vendor, are, it must be said, a mixed bag. While the stated 1,385 miles per hour maximum speed of the MiG is undoubtedly pretty spectacular, the combat radius figure of 310 miles is less than impressive.

Nigeria ordered its Fishbeds from the then-Soviet Union back in the mid-1970s, to replace its aging MiG-17 Fresco fighter jets. The Soviets delivered 24 MiG-21MFs and six MiG-21UMs in 1975. However, peacetime attrition was apparently heavy, leaving only 12 MiG-21MFs and five MiG-21UMs operational by October 1984, according to figures published in African MiGs — MiGs and Sukhois in Service in Sub-Saharan Africa. At that time, Nigeria ordered another 13 of the more advanced MiG-21bis, plus two more MiG-21UM jets to make up for these losses.

The MiG-21’s operational service with the NAF included participation in a deployment to the northeast of the country in the early 1980s, to support an Organization of African Unity (OAU) peacekeeping mission in neighboring Chad. Flying from Maiduguri, the MiG-21s apparently flew several reconnaissance sorties over Chad, and reportedly, on occasion, even landed on various dirt strips in that country.

After a dispute about fishing rights on Lake Chad in April 1983, Nigerian MiG-21s are said to have attacked several lakeside villages, leaving as many as 90 dead and many more wounded, according to an account in Vic Fintham’s Air Wars and Aircraft.

Eventually, most of the Nigerian MiGs were withdrawn from service and put into storage during the early 1990s. Since then, they have been left in the open at Makurdi, in eastern Nigeria. At least one single-seat example has been preserved, now serving as the gate guard at Abuja Air Base, as seen below:

In mid-2004, reports emerged that a Russian-Israeli consortium had offered to overhaul and return to service “all 23 remaining NAF MiG-21s.” Instead, however, it appears that Nigeria selected a rival offer for similar work from the Romanian company Aerostar working together with Israel’s Elbit. A similar upgrade has also been undertaken on Mozambique’s MiG-21 fleet and the same two companies collaborated in the LanceR upgrade for the Romanian Air Force MiG-21 fleet. The Nigerian deal was shelved after the government apparently failed to secure the required funds.

Ultimately, Nigeria turned to China to fulfill its fighter jet requirements, introducing in 2010 the Chengdu F-7, which is a much-modernized Chinese development of the MiG-21. More recently, the NAF has ordered three JF-17 Thunder aircraft that are scheduled to be delivered in 2021.

As for the 20 MiG-21s, their limited flying hours means they could theoretically still offer many more years of service. However, their storage in the open for upward of 30 years suggests that bringing them back to airworthiness could be a significant undertaking — provided it’s even possible.

With MiG-21s still active with multiple operators around the world, there may well be interest in acquiring these jets as a spare parts source, especially as they are being offered with 15 apparently unused engines. In sub-Saharan Africa alone, seven nations still fly or have recently flown, MiG-21s, and some of those aircraft have been upgraded to extend their service life further.

There is a remote possibility that the MiG-21s might interest a civilian contractor, for potential adversary services or other military support work. However, although the basic Fishbed still offers supersonic performance, its lack of any modern avionics and sensors means that it provides very limited capabilities for Red Air aggressor work. The level of safety the type offers may also be an issue.

Indeed, while Draken International has a fleet of 25 MiG-21bis and MiG-21UM aircraft, these have apparently not seen any meaningful use, despite the company’s offers to equip them with electronic warfare pods and modern radar.

Still, should there be any customers eager to acquire a ready-made, but currently non-functional air force, then the Inter Avia Group is also offering for sale three former Nigerian Air Force C-130H Hercules transport aircraft, with the proviso that these “have been stored for many years and have many parts removed.” All three of the airlifters are for sale at $2.5 million, but their transfer would require approval under the International Traffic in Arms Regulations (ITAR), the U.S. guidelines controlling the manufacture, sale, and distribution of defense equipment and services.

While it remains unclear what future awaits the little-used Cold War-era MiG-21s, if a buyer does emerge, we will watch with keen interest to see where they end up next.

Three parties were offering used F-16s and Sweden was offering the JAS-39 Gripen for the Croatian fighter tender.