Submarine-launched drones are already a reality now and the Navy is working hard to expand their use across its underwater fleets. 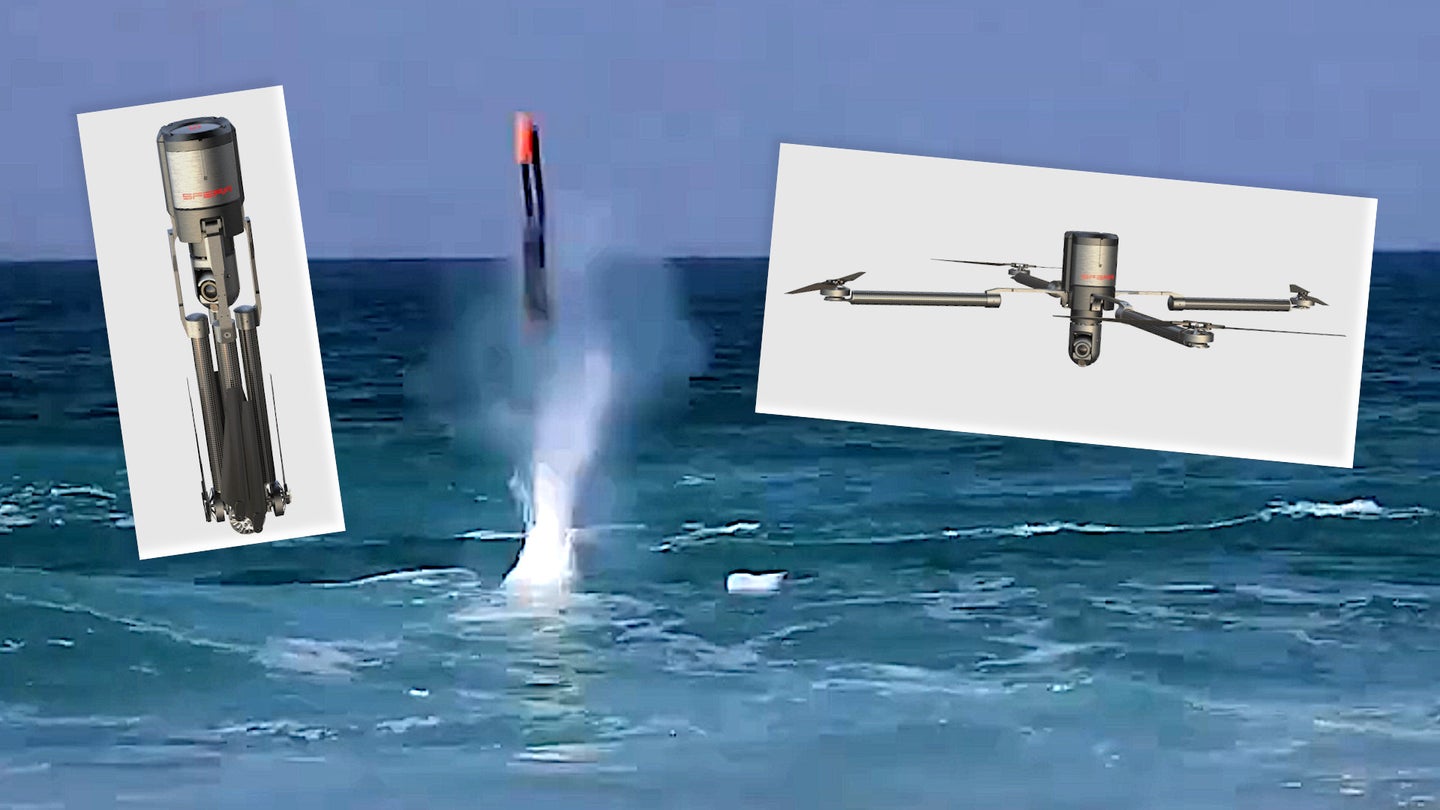 The U.S. Navy recently announced that it was interested in acquiring unmanned aircraft that its submarines could launch from the three-inch launchers they all have for deploying signal flares and marine markers. At the same time, earlier this year, an Israeli firm unveiled a line of encapsulated drones that can be deployed from 40mm infantry grenade launchers, 66mm grenade launchers on vehicles, as well as underwater launch systems.

Naval Sea Systems Command (NAVSEA) first posted a contracting notice for what it referred to as a Submarine-Launched Unmanned Aerial System (SLUAS) online on Oct. 30, 2020. NAVSEA made clear that it is only seeking proposals for potential SLUAS designs at present and that it has no firm plans to buy any such drones right now.

"The Navy requires the capability of a SLUAS with a 3-inch diameter form-factor to provide enhanced sensor, communication and cyber-security capabilities," the contracting notice reads. "The integrated system should be capable of launch from the US submarine fleet’s 3-inch Signal System Ejector (SSE) equipment."

"Threshold performance of the air vehicle should include electro-optic capability with reliable target solution analysis," it continued. "The vehicle should remain airborne for at least one hour, operate at ranges out to the line-of-sight radio horizon, and use a variable bandwidth encrypted datalink with at least 256-bit encryption strength."

In August, Israeli company Spear debuted its Ninox product line of drones designed to be fired from various launchers. The smallest of these is the Ninox 40, which is intended to be fired from standard 40mm infantry grenade launchers, including those capable of being attached to an individual's rifle. After launch, four arms pop up laterally on this tube-shaped drone, which weighs less than a pound, morphing it into a small quad-copter.

A second individual controls the UAS via a tablet-like device, which also provides a feed from the drone's electro-optical and infrared cameras. As such, troops can use the Ninox 40 during the day or at night to scout ahead for potential threats or attempt to find and fix the location enemy during an actual firefight. Spear also says that this drone has automated target recognition and tracking capabilities.

The larger Ninox 66 is similar in function and is intended to be fired from 66mm launchers on vehicles, which are typically used to fire smoke grenades or other obscurants for concealment. Unlike on the Ninox 40, the four arms on this quad-copter-type drone flip up from the base after launch. Spear says this UAS can carry various payloads weighing up to 1.5 pounds and has the ability to be networked together with others to operate as an autonomous swarm.

The biggest drone in the Ninox family is the Ninox 103, which is a scaled-up derivative of the Ninox 66 and carry payloads weighing just over three pounds. "The Ninox 103 is intuitive and easy to use with up to 60 minutes flight time, and the most advanced capabilities, including swarm, mesh [network], computer vision, target tracking, homing algorithms and more," according to Spear's website, which says that this quad-copter can remain stable in winds up to 20 knots and fly through other adverse weather conditions.

Much of this would seem to meet the Navy's basic capability requirements for the SLUAS. It's unclear exactly what type of launchers Spear has designed this system to be fired from. The drone's manufacturer says that it is suitable for launch from ships at sea, as well as vehicles and even other aircraft, but interestingly the only marketing video it has released for the Ninox 103, so far, seen below, shows it being deployed from an underwater platform. This is exactly how it would function if fired from a submarine.

It's not clear what the diameter of the Ninox 103 is, but if the company's naming conventions hold true, then it should be around 103mm, or 4 inches, which would be too wide to fit inside a Navy three-inch signal launcher. A version of the Ninox 66 that could be submarine launched would fit, as 66mm is around 2.6 inches.

The ability for a submarine to launch a small quad-copter that only has 60 minutes of flying time might not seem like much, but it could provide valuable additional situational awareness for the boat's crew without having to surface and expose themselves. Additional drones acting as communications relays could help extend how far this surveillance coverage might be able to reach while still using line-of-sight links.

Between the relatively covert nature of deploying such a system, especially at night, combined with the unmanned aircraft's small size, it could also be difficult for an opponent to quickly detect that they are under surveillance or determine the drone's point of origin. For a submarine, the drone could also provide a way to help verify surface targets and their position before engaging them with a torpedo. Determining a firing solution for launching a torpedo is a complex process that you can read about in more detail in this past War Zone piece.

In fact, in November, the Navy disclosed that it had conducted just such an experiment in 2019 with an existing, unspecified submarine-launched drone. The Los Angeles class attack submarine USS Annapolis was used in the demonstration and launched the unmanned aircraft from periscope depth and was able to control it "out to tactically significant ranges — well beyond the line of sight," according to a presentation that Rear Admiral Dave Goggins, the Navy's Program Executive Officer for Submarines, gave during the annual symposium of the Naval Submarine League, which was held online this year due to the COVID-19 pandemic.

“By doing so she [USS Annapolis] was able to target and conduct a rapid simulated torpedo attack against a participating surface ship, in case the [Independence class Littoral Combat Ship] USS Charleston, pretty much at near-maximum effective range of that torpedo, by flying that UAV to obtain a fire-point solution after gaining that initial sonar gain," Goggins continued.

"Consider a submarine-deployed unmanned aircraft as a flying periscope able to dramatically extend our submarines' organic sensor range, provide target-quality sensor data back to the submarine, or to a joint force capability, and enable Harpoon and Maritime Strike Tomahawk missile engagements," Navy Rear Admiral Blake Converse, Commander, Submarine Force, U.S. Pacific Fleet, said in a separate online talk as part of the Naval Submarine League symposium. "We are always working on tactic development exercises to enhance the performance of our existing submarine sensors and identify areas for improvement so that we can detect the adversary well before he sees us and we can shoot him first."

The potential to network submarine-launched drones together into swarms, something, as noted, that Spear says Ninox 103 can do, would offer additional capabilities to submarine commanders. A swarm of unmanned aircraft could search for targets or other objects of interest across a broader area at once. Individual drones could carry a mix of payloads, including electronic warfare jammers and even potentially small munitions, allowing them to perform multiple tasks simultaneously, including launching kinetic or non-kinetic attacks themselves. They can also be used as 'daisy chain' relays to extend line-of-sight connectivity.

A swarm also simply has the inherent ability to present an opponent with a large number of targets approaching from multiple vectors at once. This can overwhelm, confuse, or otherwise disrupt the decision-making processes of an enemy, making it hard for them to effectively respond.

It is, of course, important to note that Ninox 103 isn't the only submarine-launched drone that the Navy might be interested in for this new SLUAS requirement. The service has been exploring this kind of capability for decades now, as you can read about in more detail in this past War Zone piece.

In 2013, the Navy said it has been actively testing AeroVironment's Blackwing, a derivative of that company's Switchblade loitering munition, or "suicide drone," that is capable of being fired from three-inch countermeasures launchers on submarines. In November, Rear Admiral Goggins said that 21 SLUASs had been employed in demonstrations, though it's not clear how many individual types the Navy has actually experimented with. The service had notably completed a series of fly offs in July in cooperation with the Pentagon's Defense Innovation Unit (DIU), which has the stated mission of "accelerating the adoption of leading commercial technology throughout the military."

"I have five SLUAS shipsets in the fleet today and we will continue to deliver this capability," Goggins added. "We’re really working on the evolution of that capability going forward."

Hopefully, we will learn more as time goes on about new submarine-launched drone designs that the Navy might be considering acquiring in the future. What is clear is that this is a capability that is already in use to some degree and submarines deploying unmanned aircraft look set to become increasingly the norm as time goes on.