Aevum’s Space Launch Plane Is A-5 Vigilante Sized, Its Claims Are Even Bigger

The rollout of a mockup of the Ravn X Autonomous Launch Vehicle concept was intriguing, but it also raised a lot of questions. 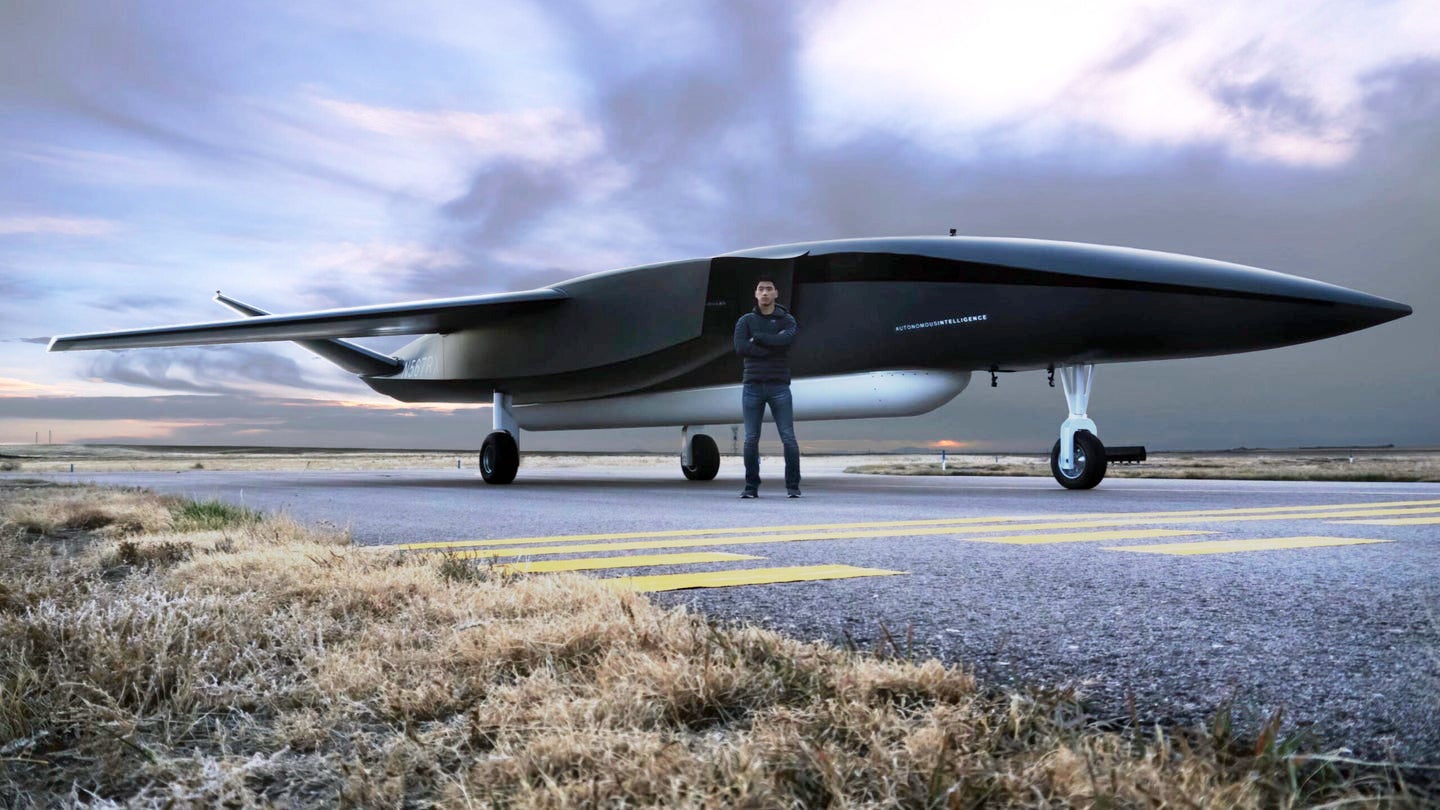 A little-known U.S. start-up, Aevum, held an online rollout event yesterday for its Ravn X Autonomous Launch Vehicle, including footage of a full-size mockup of the aircraft. Established in 2016, the Huntsville, Alabama-based firm is proposing a reusable drone that will carry an underslung rocket that will, in turn, launch a small payload, such as a satellite, into low orbit.

The twin-engine Ravn X drone — described by the company as the first stage of the system — reportedly weighs 55,000 pounds, is 80 feet long, and has a wingspan of 60 feet — roughly the size of an A-5 Vigilante. The sleek drone, strongly reminiscent of the smaller Boeing Loyal Wingman in basic appearance, has seemingly been tailored for speed and will serve as the “mothership” for a two-stage rocket that is able to carry a payload of just over 1,000 pounds. As such, Aevum classifies the complete Ravn X system as a three-stage space launch vehicle.

Intriguingly, the full-size mockup shown in the video wears the U.S. registration N567RX, which, although it’s registered in the CEO’s name, is not currently assigned to a particular aircraft and, at the time of writing, due to be removed from the registry on December 15, 2020.

You can watch the rollout event in full in this video:

The company claims that using an unmanned vehicle as the first stage of its launch system has the benefit of allowing the rocket motor to be ignited as little as 0.5 seconds to 1 second after release. Such a rapid separation from below the belly of the drone reduces energy bleed from the rocket, meaning that it loses as little momentum as possible after being released. The company contends that this kind of launch profile would be prohibitively dangerous using a manned first stage. In a traditional air launch, from a manned vehicle, the rocket has to fall away for a longer period before the rocket ignites, keeping the crew safe, but decreasing the kinetic potential of the rocket.

According to reports, the rocket is intended to be released from the drone at an altitude between 33,000 and 66,000 feet. Each of its two stages will apparently generate 5,000 pounds of thrust. Company CEO, Jay Skylus, told the Ars Technica blog that the engines “have been hot-fire tested beyond their full-duration burns,” and have “gone through qualification and acceptance testing.”

Although there have been similar proposals using a reusable spaceplane as the first stage, the concept of a reusable, unmanned, autonomous mothership that can take off and land like a normal aircraft is new, at least to the private sector. The Ravn X also promises to be generally simpler, cheaper, and more flexible than traditional rockets fired from fixed launch pads. The company is at pains to distinguish its concept from other air-launch methods, including the Northrop Grumman Stargazer or Virgin Orbit LauncherOne, since the Ravn X first-stage drone accelerates the rocket up through the atmosphere at high-speed until a quick release and ignition. Exactly just how big of a difference in end-game performance this method garners remains unclear.

The highly ambitious timeline for getting Ravn X into the air will start with “vehicle-level testing” to obtain the required airworthiness certification and launch licensing for operations, a process that should take 18 months, according to Skylus. From there, Aevum plans to secure airworthiness certification for the first-stage drone from the Federal Aviation Administration.

Once these goals have been accomplished, the company says the Ravn X will commence orbital launch tests from Cecil Spaceport in Jacksonville, Florida, by late 2021. That is undoubtedly a very ambitious, if not almost bizarre, timetable for a system that, apparently, has not yet been built. While taxi tests have been promised, the mockup shown in the rollout video does not seem to be suitable for this kind of test work, lacking fundamental features, as keen observers were quick to point out:

While Skylus has confidently predicted that the Ravn X should be ready for operations within the next 18 months, there also remain some major question marks about the feasibility of the project and the source of its funding so far, which is reported to have included five rounds of angel investment fundraising.

Although the certification needed to operate this type of launch vehicle is somewhat uncharted territory, Aevum believes that the drone-based design makes the most sense from the point of view of its future customers, as it will be able to make use of existing (manned) aircraft infrastructure and support equipment. The drone portion is powered by standard jet fuel fed to traditional jet engines. All this is considered necessary to dramatically reduce the lead time required for a launch to a matter of months, rather than years, Aevum contends.

As for the likely customers for Ravn X, the initial mission will be on behalf of the U.S. Space Force, following the award of a $4.9-million contract last year. This is for the Agile Small Launch Operational Normalizer, or ASLON-45, and was originally awarded to Vector Launch. That company had to withdraw after financial troubles, leaving the door open to Aevum, which is now scheduled to complete the mission in late 2021.

Present at the digital rollout was Lieutenant Colonel Ryan Rose, chief of the Space and Missile Systems Center’s Small Launch and Targets Division at Kirtland Air Force Base, New Mexico, confirming that there is genuine U.S. military interest in Ravn X. She noted the “bold innovation and responsiveness” that Aevum has demonstrated. However, it may be a stretch to describe the Air Force as a “mission partner” in the initiative, as some reports have suggested.

The firm has a plan to eventually provide eight to 10 launches annually, at a cost of $5 million and $7 million for each mission.

Other government money is coming from a U.S. Air Force Small Business Innovation Research contract worth $50,000 and another, classified Pentagon contract. In addition, the start-up is competing for launch contracts under the Orbital Services Program-4, which could be worth almost a billion dollars across a nine-year period.

At least one press release, however, seems to suggest that it has already secured this $986 million that covers the 20 launches specified under Orbital Services Program-4. In fact, Aevum is just one of several companies that will likely compete for this work.

While funding is already coming in from U.S. government contracts, Aevum has also received private funding, although how much has not been disclosed. The company website mentions one commercial customer, but withholds its identity as “confidential” and it does not reveal when that mission is scheduled to take place. Ultimately, Aevum hopes to have 85 percent of funding come from commercial clients, while the other 15 percent is from different defense and research agencies.

With costs that the company admits are not as competitive as some space launch rivals, Aevum is hopeful that Ravn X will instead offer a faster and simpler route to putting payloads into orbit, thanks to its independence from traditional rocket launch infrastructure: “After making its delivery to low-Earth orbit, the UAS [unmanned aircraft system] simply returns to Earth, autonomously landing safely on a runway and parking itself in the hangar,” the company explains.

The limited throw weight that is a limitation of this type of launch vehicle concept means it will not be able to deliver larger payloads into orbit, but that is not necessarily a problem for the U.S. Air Force, and now the Space Force and the Missile Defense Agency, who all have requirements for putting smaller satellites into space. This concept could potentially be used for other work two, including testing of hypersonic weaponry and air-launched missiles of other varieties. One could even see the potential offensive applications for such a system. If this concept were to come to fruition, just being able to more rapidly and reliably access low-Earth orbit on demand would be very enticing for the Pentagon, as it sees its larger satellites as vulnerable during a peer-state conflict. As such, being able to rapidly replace them with constellations of smaller, less complex satellites is becoming an increasing priority, as is putting new capabilities in orbit as needed at short notice.

Despite a relatively huge number of legitimate questions about the viability of the project, it seems that Aevum has come up with an intriguing space launch concept. Only time will tell if the company’s bold claims will be followed by the successes that have been promised.