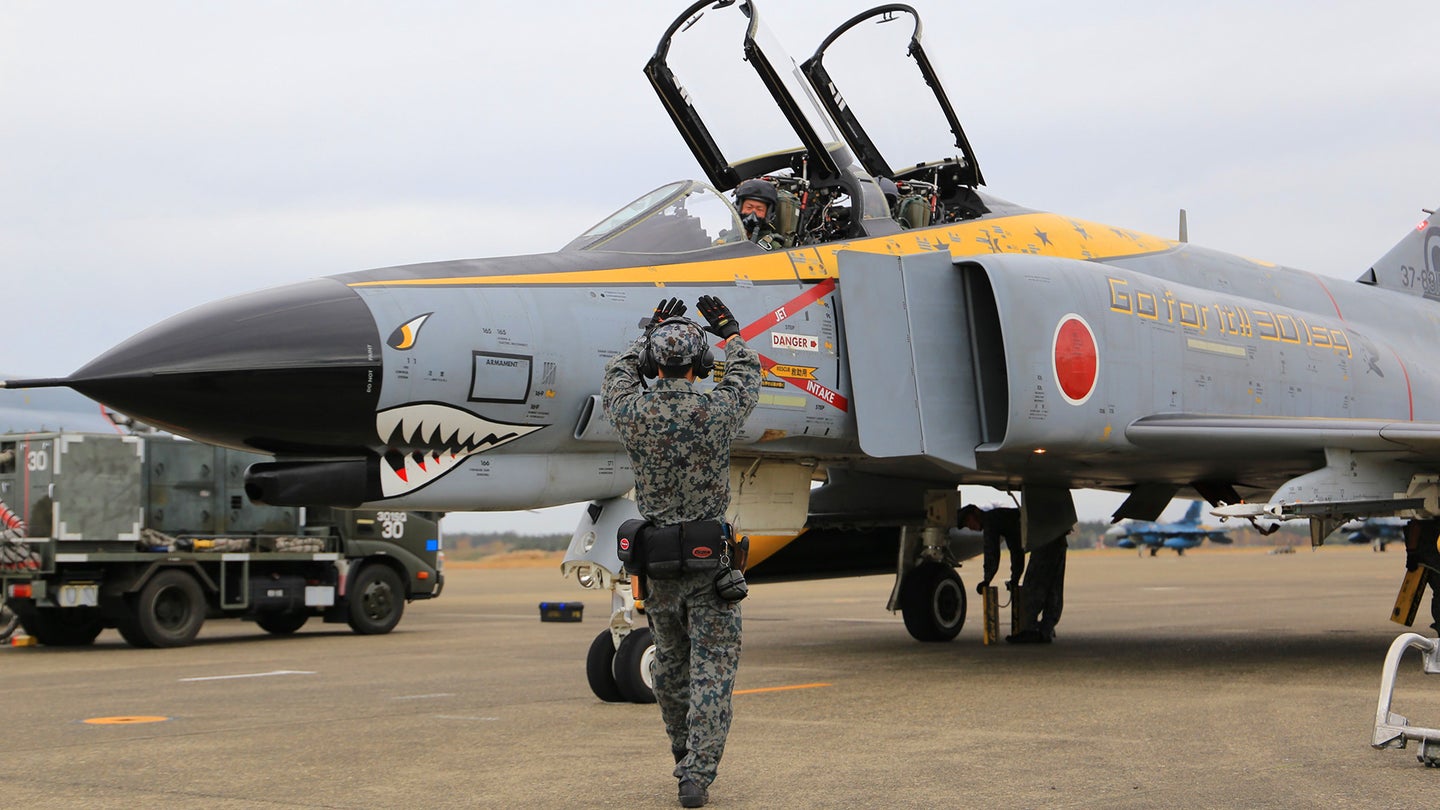 After 48 years, Japan’s days of flying F-4 Phantom II fighters in a combat role are coming to an end. The landmark was formally marked today, with a send-off event for the jets. The aircraft were from 301 Hikotai, the country’s last combat unit equipped with the type, and it’s expected to cease flying operations next month. The remaining F-4EJs will, in the future, only be flown by the country’s Air Development and Test Wing.

The ceremony to mark the end of the Japan Air Self-Defense Force (JASDF) operating the F-4EJ took place at Hyakuri Air Base, 301 Hikotai’s home base, in Ibaraki Prefecture, 50 miles northeast of Tokyo. Representatives from the base, various squadron commanders, as well as officials representing the wider JASDF attended the event.

Japan’s Phantom story began in 1968 when the McDonnell Douglas type was selected for the JASDF, an order being placed for 140 F-4EJ versions, based on the U.S. Air Force’s then-standard F-4E. The production effort was of considerable significance for Japan’s aerospace industry, with all but the first two F-4EJs being completed under license by Mitsubishi Heavy Industries (MHI).

Meanwhile, the initial pair from the production line in St Louis, Missouri, touched down in Japan on July 25, 1971. The first Phantoms to be based at Hyakuri arrived there in 1972 and were assigned to 301 Hikotai, which was declared fully operational the following year.

The Japanese production run also included the last of the 5,195 Phantoms built anywhere in the world — F-4EJ 17-8440 rolled off the MHI production line on May 21, 1981. The following year, Japan kicked off a major upgrade effort for its F-4EJ fleet, which would bring 96 examples up to F-4EJ Kai standard, with “Kai” meaning “improved.”

The definitive F-4EJ Kai, which the JASDF had continued to fly in a frontline role until today, had new avionics other systems installed, including an enhanced bombing computer. It also featured an AN/APG-66J pulse-Doppler radar, based on the standard AN/APG-66 used in early F-16 Viper fighter jets. The upgraded Phantoms gained the AN/ASN-141 inertial navigation system, similar to the one found in Japan’s F-15J air superiority fighters, as well.

In the cockpit, the F-4EJ Kais received modern hands-on throttle and stick (HOTAS) controls and a head-up display (HUD). Additional avionics changes included the installation of the AN/APX-76A identification friend or foe (IFF) system and the J/APR-6 radar warning receiver (RWR) suite, while AN/ALE-40 countermeasures dispensers were fitted for self-defense.

The F-4EJ Kai’s airframe was also reworked to add another 2,000 hours of flight time, while weapons options were expanded to include the indigenous ASM-2 anti-ship missile and AAM-3 air-to-air missile, and eventually the Joint Direct Attack Munition (JDAM) — all of which can be seen in the photos below, together with a towed target. The improved variant of the fighter entered service beginning in 1989.

As well as the F-4EJ, Japan had acquired Phantoms for the reconnaissance role. The first of an initial batch of 14 unarmed RF-4E variants were delivered by McDonnell Douglas in 1974 to replace the aging RF-86F Sabre.

Another 15 existing F-4EJs were later converted to RF-4EJ standard, but these lacked any internal reconnaissance equipment and were limited to carry external reconnaissance pods. These jets also underwent their own upgrades during their service, receiving AN/APQ-172 terrain-following radar, a new inertial navigation system, and modified RWRs.

At its peak, the F-4EJ equipped six JASDF squadrons, spread across four bases. Most of these were gradually re-equipped as the force received more modern and capable equipment, chiefly the F-15J and the Mitsubishi F-2 multirole fighter.

The last two operational units flying variants of the F-4EJ at Hyakuri were 301 Hikotai and 501 Hikotai. 301 Hikotai had left Hyakuri in 1985 for Nyutabaru Air Base, before returning to its original home in 2016 and operating in an air defense capacity. 501 Hikotai, the Teisatsu Kokutai, or Reconnaissance Air Group, flew RF-4Es and ceased operations in March.

The retirement of the Phantom doesn’t signal the end for 301 Hikotai. It is now due to move to Misawa Air Base, where it will become the second JASDF squadron to be equipped with the F-35A stealth fighter.

The JASDF established its first operational F-35A squadron, 302 Hikotai, at Misawa in March 2019. This squadron was another former Phantom operator that gave up its last F-4EJs at Hyakuri in 2019 before switching to its new base. As for Hyakuri, it will continue to serve as a fighter base, with 3 Hikotai scheduled to transfer its F-2s there from its current base at Misawa.

The introduction of the F-35 in Japan is following in similar ways to the country's Phantom program, too. MHI worked with Lockheed Martin to establish a Final Assembly and Check-Out (FACO) facility for the JASDF’s F-35A variant in Nagoya, Japan, after the first four F-35s for the service were built at Lockheed’s plant in Fort Worth, Texas.

The State Department’s approval of this proposed deal follows Tokyo’s initial order for 42 conventional takeoff and landing (CTOL) F-35A variants, deliveries of which are now well underway. One of the F-35As has been lost, in a fatal accident that occurred over the Pacific Ocean in April 2019.

The end of Phantom combat operations in Japan comes at a time in which the country is stepping up military spending and looking to modernize its military, as a whole, in response to increasing national security threats and challenges, especially from China and North Korea. In terms of its tactical aviation fleets, in addition to the F-35, Japan is also now embarking on its next-generation combat aircraft, which will likely be co-developed with an aerospace firm from the United States or the United Kingdom.

The end of the line for frontline Phantoms in Japan also further reduces the dwindling total of F-4s still in operational service throughout the world. Surviving frontline Phantoms are now only found among the air forces of Greece, Iran, Turkey, and South Korea.

Trading in the Phantom, a classic Cold War-era fighter jet, for the F-35 is the latest, and one of the more visible steps, in the ongoing modernization of the JASDF. Still, saying farewell to the iconic F-4, after almost a half-century of service, will surely be bittersweet for the JASDF.