One of the aircraft's engines broke apart in flight, sending fragments flying through the fuselage and falling onto buildings below. 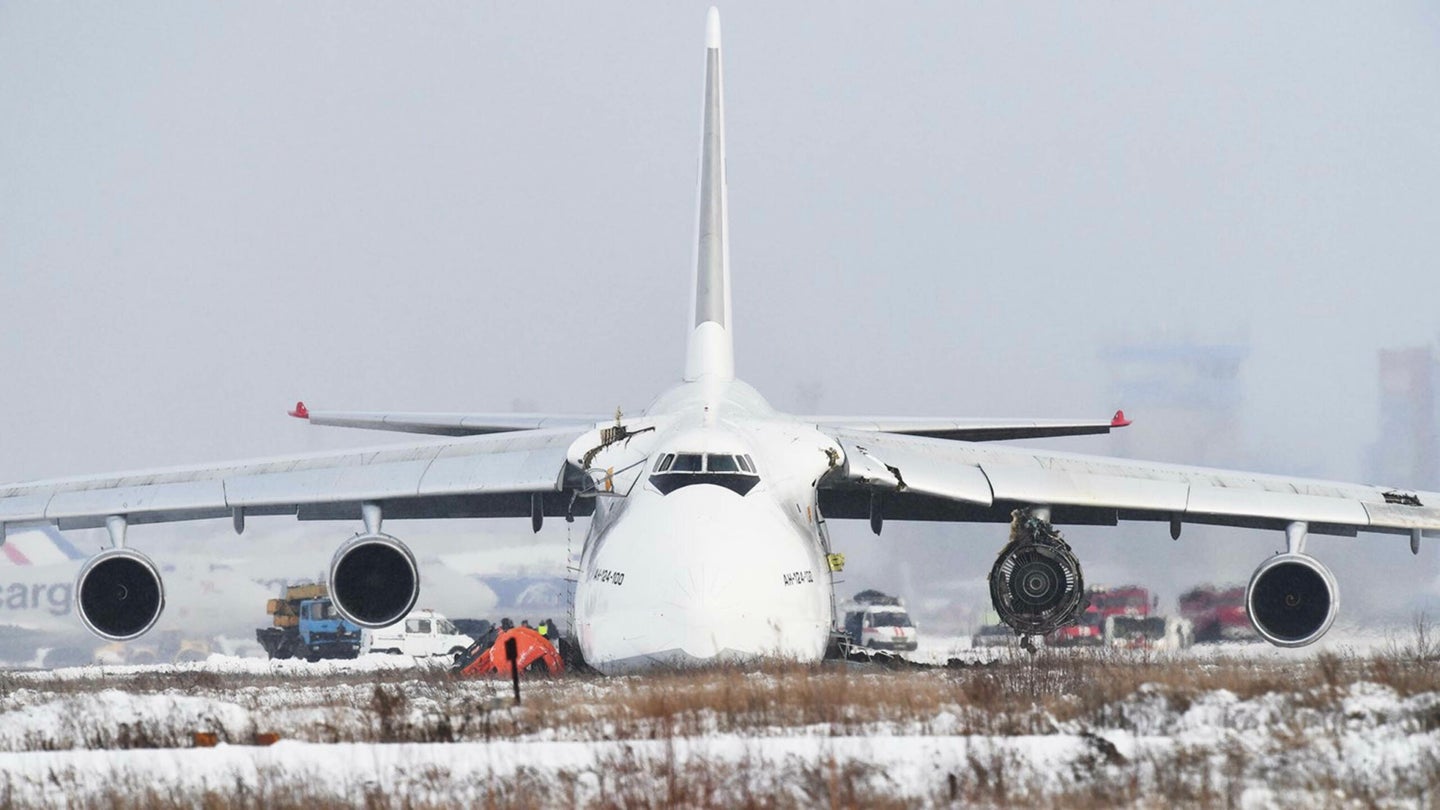 An Antonov An-124 Condor strategic transport aircraft, operated by Russia’s specialist Volga-Dnepr Airlines, made a dramatic emergency landing today at Novosibirsk in Siberia after a catastrophic engine failure after take-off. On landing, the airlifter’s nose landing gear collapsed and it skidded off the end of the snowy runway. Despite several pieces of engine debris landing on a populated area, no injuries have been reported so far.

The An-124-100, which has the Russian registration RA-82042, and is one of around a dozen in service with Volga-Dnepr, had departed Novosibirsk International Airport in Tolmachevo and was destined for Vienna, Austria. It was not carrying any cargo at the time of the incident, but 14 crew members were on board.

The An-124 has a normal flight crew of six and it generally carries two loadmasters for handling cargo, as well. For long-distance assignments, an additional relief crew can be carried in a separate compartment on the upper deck, behind the cockpit, which was the case on this particular flight.

Videos of the incident show the An-124 coming in to land at Novosibirsk International Airport in a tight banking turn, before touching down on runway 25, around two minutes after it had taken off. The An-124, which weighs over 390,000 pounds when unloaded, overran the end of the runway by around 650 feet, with its nose undercarriage collapsing in the snow.

Initial reports indicate that the aircraft’s number two engine, in the inboard left nacelle, suffered an uncontained engine event, which occurs when fragments of rotating turbine parts penetrate and exit through the nacelle. These types of failure can be especially dangerous since they pose a risk of fast-moving parts penetrating the cabin, fuel tanks, flight control surfaces, or other critical parts of the aircraft.

In this case, it seems that some of the engine parts penetrated one side of the fuselage before passing through the other, tearing especially visible holes around the wing root, while other parts fell to the ground. Photos posted after the event seem to show that some of this debris smashed through the roof of a warehouse.

The An-124 is powered by four Ivchenko Progress D-18T Series 3 turbofans, each rated at over 51,000 pounds of thrust at take-off. Like the An-124, these powerplants date from the Soviet era. It’s worth noting these engines were originally produced in Ukraine. The collapse in the Kremlin’s relations with that country following its annexation of Crimea in 2014 has made it impossible to secure additional engines and spare parts. Depot-level maintenance had also previously been carried out in Ukraine. It’s not clear if any of these issues contributed in any way to this particular accident and a formal investigation is currently underway.

As well as the engine failure, the An-124 reportedly experienced a loss of communications, with its radios and transponder failing. This all reportedly occurred when the plane reached approximately 1,800 feet, while it was still climbing to its cruising altitude. It’s unclear if the communications loss occurred simultaneously with engine failure.

Developed by the Antonov Design Bureau in Kyiv, Ukraine, from the early 1970s, the An-124, which is also named Ruslan, after a character from Russian folklore, was intended primarily as a strategic military transport, equipped with modern features including a fly-by-wire control system. The first of two prototypes first flew on December 26, 1982, and a total of 54 series-production aircraft followed, these being built in both Kyiv and at a factory in Ulyanovsk in Russia.

Four An-124s have been previously lost entirely in accidents, the most recent incident being in December 1997, when an example leased from the Russian Air Force by Cargotrans, carrying two Su-27UB Flanker jet fighters to Vietnam crashed after take-off at Irkutsk in Russia’s far east. The aircraft hit a residential building, killing 23 people aboard the aircraft and 45 people on the ground.

As of 2016, the Russian Aerospace Forces (VKS) operated 26 An-124s, but only nine were airworthy. The non-flyable examples are in a process of being gradually returned to service, at a rate of one or two each year.

The An-124 continues to offer unique capabilities to the Russian military and its allies, with aircraft operated both by the VKS and by commercial contractors, such as  Volga-Dnepr, who also provide their services to the country’s military and play a key role in transporting Russian-made military materiel to export clients, for example, the S-400 air defense systems delivered to Turkey. Important roles for VKS An-124s have included delivering arms and equipment to the Russian contingent in Syria and, more recently, ferrying Russian military materiel for its peacekeeping mission in Nagorno-Karabakh.

As well as serving Moscow and its clients, the An-124 has also played an important role for NATO in recent years, providing heavy-lift air transport to the alliance under the Strategic Airlift International Solution (SALIS) agreement that ensures access to up to five An-124-100 aircraft in support of national, NATO and European Union operations.

In the past, Russia planned to resume production of a modernized An-124 in Ulyanovsk, with hopes to have the first of 45 examples completed in 2020. However, this project had to be shelved following Russia’s breakdown in relations with Ukraine in 2014, as the Ukrainian Antonov company still retains the rights to the An-124.

Instead, Russia is now looking at an all-new design to replace the An-124 in the future. This program is named Slon, meaning elephant in Russian, and envisages an aircraft of similar overall appearance to the An-124, but even larger. You can read more about this proposed replacement in this previous War Zone piece.

When it comes to RA-82042, the exact causes of this mishap remain unknown and it’s unclear whether it will be possible to repair the aircraft and, if so, how long it might take to return it to service.