“Indestructible” Jack Lucas’ selfless actions saved three other Marines during the Battle of Iwo Jima. Now he is getting a destroyer named after him. 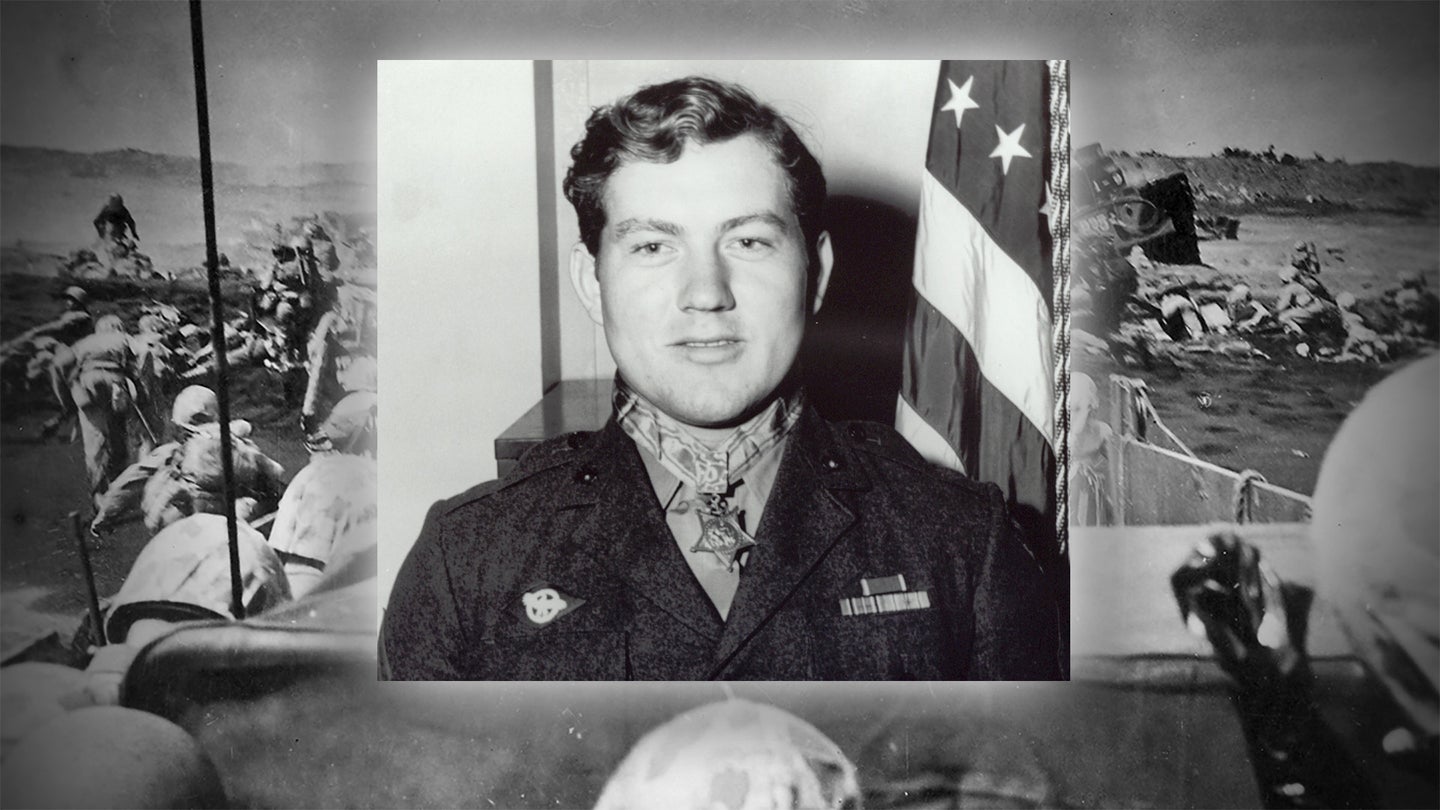 Though people often get the two mixed up, Veterans Day is a time for honoring those who have served in the armed forces, while Memorial Day is a time for tributes to those who paid the ultimate price during their service. Sometimes, though, the line between the two can get a bit blurry when talking about individuals who were clearly willing to give up their lives, and almost did, to save their brothers and sisters in arms. Case in point, the story of Jacklyn "Jack" Lucas, who threw himself on not one, but two grenades to shield his fellow Marines from the blasts during the Battle of Iwo Jima in the Pacific Theater during the latter stages of World War II. For this monumental act of heroism, Lucas was awarded the Medal of Honor, becoming the youngest recipient of this honor since the Civil War. The U.S. Navy is now set to get an Arleigh Burke class destroyer named after him.

Lucas, the son of a North Carolina tobacco farmer, had first enlisted in the U.S. Marine Corps Reserves on Aug. 8, 1942, just over eight months after the United States entered World War II following the infamous Japanese attack on the U.S. Navy base at Pearl Harbor in Hawaii. He was 14 at the time and was only able to sign up with the Marines after forging his mother's signature on a parental consent form, which said he was 17, and bribing a notary to sign it.

"My father died when I was 11 years old and I became kind of a tough kid after that to handle," Lucas said in a recorded interview decades later, which you can watch in its entirety below. "My mother couldn't handle me [and] sent me off to military school."

"I was kinda devastated when we got the news that all those people suffered there at Pearl Harbor," he continued. "That very day, a cold chill ran down my spine and I just became obsessed that I had to do something."

With the Marines, unaware of his true age, the teenager, who had just recently completed eighth grade, quickly went to boot camp at the famous Marine training base at Parris Island in South Carolina. After being assigned to a succession of training units, where he was ultimately qualified to be a heavy machine gun crewman, Lucas was eventually sent to join the 6th Base Depot, part of the V Amphibious Corps, at Pearl Harbor in 1943.

In the recorded interview, Lucas says that prior to leaving for Hawaii, he had become frustrated with not being able to get into combat and had broken ranks to join other Marines heading first to California. "They gave me orders, along with nine others, to stay at the base to relieve older cadres and to send them out" into combat, Lucas said. "That wasn't my cup of tea."

An official Marine Corps historical profile makes no mention of this. However, this spirit was certainly present after he arrived at the 6th Base Depot. On Jan. 10, 1945, then-Private First Class Lucas donned a khaki uniform and, with nothing but a pair of dungarees and an extra set of shoes, stowed away on board Haskell class attack transport ships USS Deuel. That ship was carrying the 1st Battalion, 26th Marine Regiment, part of the 5th Marine Division, and was headed to take part in the invasion of Iwo Jima.

"I didn't even know where the ships were headed," Lucas said. "I'd never heard of Iwo Jima in my lifetime. I knew I was going away to war and that's where I wanted [to be], that was my obsession."

The Marine Corps had declared Lucas Absent Without Leave (AWOL) and a deserter and put a reward out for bringing him back. The service demoted him to the rank of Private in the process. This was the predicament he found himself in when he surrendered to Captain Robert Dunlap, commanding officer of C Company, 1st Battalion, 26th Marines while the ship was still underway.

However, beyond the reduction in rank, Lucas received no further punishment for his actions. Lieutenant Colonel Daniel Pollock, the commanding officer of 1st Battalion, 26th Marines, promptly sent the teenager to join Dunlap's company as a rifleman.

The Marine Corps says that Lucas was technically assigned to Headquarters Company, 5th Marine Division, but he landed on Iwo Jima with the rest of C Company on Feb. 19, 1945. He had turned 17 just six days earlier.

The invasion of the island and the subsequent campaign to capture it from Imperial Japanese forces was a brutal undertaking. The initial landings were a particular slog given the volcanic sand on the beaches, which was soft and hard to traverse on foot and was virtually impossible to dig into to help provide any kind of immediate cover against fire from the heavily fortified Japanese positions ahead.

"Thank goodness I didn't have to go in the first wave, but when we went in it was like all hell broke loose about [sic] artillery, just tearing people up," Lucas said. "It was just a continuation from night and day for the rest of that battle."

More than 5,000 American service members had died on the beaches of Iwo Jima. Around 1,800 more were killed in the course of recapturing the entire island over the next month or so. Marines famously raised the American flag on the island's Mount Suribachi on Feb. 23, marking a major victory against the Japanese. The Battle of Iwo Jima was declared officially over on Mar. 26.

However, Lucas' participation in the fighting ended the day after the initial landing. He and three other Marines were advancing inland with other American forces when, after passing through a twisting ravine, they came under fire from enemy fortifications. Lucas and two other Marines jumped into a nearby trench, while the fire team leader scrambled to another, only to find it occupied by Japanese troops.

"Well, all hell broke loose and we opened fire on the Japanese. I opened fire, I shot two. The second shot, my rifle, of all things, my rifle jammed," Lucas said. "When I reached down to unjam my rifle, I saw two grenades. How long had it been down there? I didn't know. Two seconds?"

"If my rifle hand not jammed it would have probably wounded all of us, not killed us, but wounded us," he continued. "Then those Japs we were supposed to be killing in front of us would have finished us off."

Lucas dropped onto one of the grenades and pulled the second one underneath him. Only one went off, severely wounding him in the right arm, wrist, leg, thigh, and chest. The soft sand on Iwo Jima may have helped save his life by absorbing much of the explosion.

However, his fellow Marines, who were left unscathed, believed he was dead and moved on. Another unit subsequently noticed that Lucas was still alive and attended to his wounds before getting him back to more serious medical care at the beachhead. He was eventually transferred to the hospital ship USS Samaritan and made his way through various field hospitals before eventually returning to San Francisco. Doctors performed a total of 21 surgeries on Lucas and left more than 200 pieces of shrapnel inside of him, some large enough to set off airport metal detectors during his travels later in life.

In August 1945, at which time he was still a patient at the U.S. Naval Hospital in Charleston, South Carolina, the Marine Corps scrubbed the charge of desertion from Lucas' record and reinstated his former rank of Private First Class. He was formally discharged from the Marines due to disability on Sept. 18, 1945, just over two weeks after the official end of World War II.

On Oct. 5, 1945, President Harry Truman presented Lucas with the Medal of Honor for his actions on Iwo Jima. Three sailors and 10 other Marines, including Captain Dunlap of C Company, 1st Battalion, 26th Marines, also received Medals of Honor during this ceremony at the White House for their own heroics.

The official citation for Lucas' award is as follows:

"For conspicuous gallantry and intrepidity at the risk of his life above and beyond the call of duty while serving with the First Battalion, Twenty-sixth Marines, Fifth Marine Division, during action against enemy Japanese forces on Iwo Jima, Volcano Islands 20 February 1945. While creeping through a treacherous, twisting ravine which ran in close proximity to a fluid and uncertain front line on D-plus-1 Day, Private First Class Lucas and three other men were suddenly ambushed by a hostile patrol which savagely attacked with rifle fire and grenades. Quick to act when the lives of the small group were endangered by two grenades which landed directly in front of them, Private First Class Lucas unhesitatingly hurled himself over his comrades upon one grenade and pulled the other one under him, absorbing the whole blasting force of the explosions in his own body in order to shield his companions from the concussion and murderous flying fragments. By his inspiring action and valiant spirit of self-sacrifice, he not only protected his comrades from certain injury or possible death, but also enabled them to rout the Japanese patrol and continue the advance. His exceptionally courageous initiative and loyalty reflect the highest credit upon Private First Class Lucas and the United States Naval Service."

Though Jack Lucas remained a civilian for years afterward, his "obsession" with serving his country returned in 1961, when he re-enlisted in the U.S. Army in 1961, eventually training to be a paratrooper. He is said to have miraculously survived a training accident in which both his primary and reserve parachutes failed to deploy properly. He was subsequently assigned to the 82nd Airborne Division, but was not sent to Vietnam, despite volunteering to do so. His second stint in the armed services came to an end in 1965.

A profile on Lucas on the website of the National World War II Museum in New Orleans says that he also escaped a house fire and attempt by his then-wife to have him murdered. His memoir was, perhaps unsurprisingly, titled Indestructible: The Unforgettable Story of a Marine Hero at the Battle of Iwo Jima.

When the keel of the Wasp class amphibious assault ship USS Iwo Jima was laid down in 1997, Lucas placed his Medal of Honor citation inside, where it remains sealed to this very day. In 2016, eight years after Lucas' death, then-Secretary of the Navy Ray Mabus announced that a future Flight III Arleigh Burke class destroyer would be named the USS Jack H. Lucas in honor of the late Marine. That ship was laid down last year and is expected to be commissioned in 2023.

One can only imagine the traditions the ship's eventual crew may form around the memory of the indestructible Jack Lucas, a true American hero with a self-described obsession to serve his country.

On this Veterans Day, we are so thankful for Jack Lucas and all of those who proudly served.

It takes great mental fortitude and physical strength to execute one of the USMC’s most challenging missions and it has nothing to do with combat.