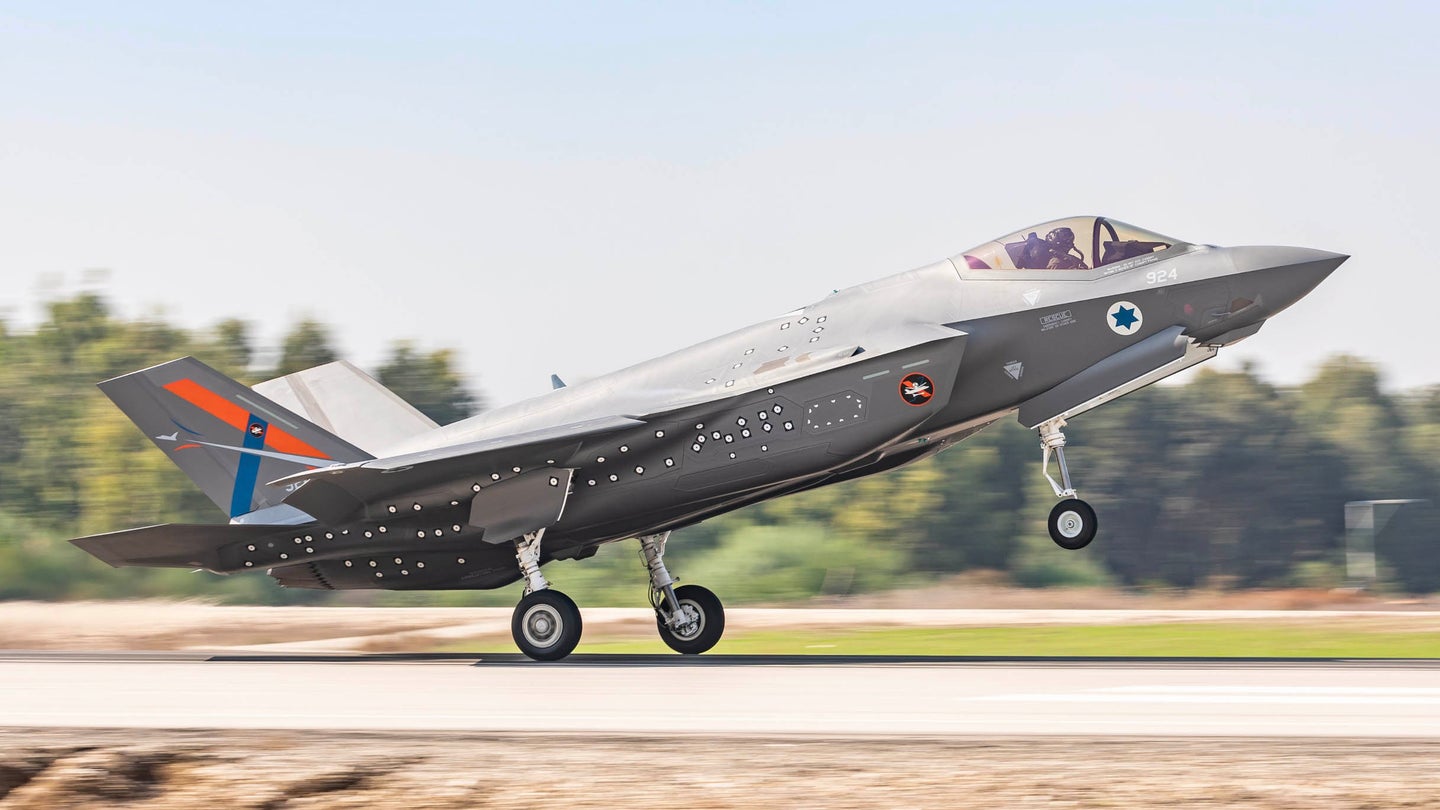 The Israeli Air Force’s uniquely outfitted test variant of the F-35I stealth fighter has arrived in the country, the air force confirmed today. The one-off version of the “Adir,” as the aircraft is named in Israel, touched down at Tel Nof Air Force Base in the center of the country, which has new facilities, including a revamped flight line, to host the fifth-generation jet.

​Described by the Israeli Air Force (IAF) as “the first test F-35” outside the United States, the specially equipped F-35I will join the service’s Flight Testing Center (FTC) Squadron, also known by its Hebrew acronym MANAT, which is charged with putting all of its equipment through its paces, including aircraft and weapons trials, avionics integration, and airframe modification and testing.

The first new aircraft to be assigned to the FTC in 14 years, the F-35I, line number AS-15, IAF serial 924, was the 15th “Adir” to come off the production line at Fort Worth, Texas and was initially retained in the United States, presumably for pre-delivery testing. During that time, it was seen with calibration markings, normally associated with weapons release tests, and it now sports the FTC’s orange and blue markings and squadron insignia, plus high-visibility national markings, making it one of the world’s more colorful F-35s.

If required, however, the test “Adir,” which you can read about in detail in this previous War Zone article, can be converted to a fully operational configuration, as can all the other aircraft in the FTC Squadron. Israel has already flown its F-35Is in combat, as disclosed by the Israeli Air Force back in 2018.

“To the FTC Squadron personnel, the absorption of the “Adir” poses new challenges,” said Brigadier General Oded Cohen, commander of Tel Nof AFB, speaking at the induction ceremony for the new jet. “I have no doubt that by virtue of your skill and professional spirit you will know, as you have proven in the past, how to challenge the limits of the “Adir’s” capabilities and lead the IAF through toward new horizons.”

Among those challenges will almost certainly be the introduction of Israeli-developed weapons destined for the IAF’s operational F-35Is, which are now serving with two other squadrons. Currently, all the IAF’s fast jet platforms have been adapted to use indigenous weapons and, in the past, the FTC has hinted that the aircraft’s flight envelopes have also been expanded while carrying these weapons. The IAF has mentioned that the “Adir” will receive locally developed electronic warfare and communications systems, too. Weaponry is expected to include the Rafael SPICE precision-guided bomb, but may eventually include air-to-air missiles and other weapons, too.

However, the air force also admits that incorporating indigenous systems in the F-35I will not be as easy as with previous-generation aircraft, thanks to the Joint Strike Fighter’s closely guarded software codes.

“In the “Adir” program, the IAF doesn’t have access to everything, and cannot fully intervene,” explained Lieutenant Colonel Y, commander of the FTC Squadron. Nevertheless, Lieutenant Colonel Y added that “The experimental F-35I will act as the main building block for acquiring new flight capabilities and allow for independent installation of munitions.”

Each new weapon introduced for the “Adir” will be tested as part of a certification process, and AS-15 will carry equipment to measure and record factors including load testing, flutter, and release characteristics.

“In load testing, we examine the durability of the weapon and aircraft while performing complex maneuvers,” Lieutenant Colonel Y continued. “In flutter testing, we check for aerodynamic phenomena that may endanger the jet. While testing release fluency, we scan for issues in the release process of munitions — a significant test for the “Adir” since its payload is released from an internal hold in the jet’s body. After the testing process is completed, we are able to determine the guidelines for operating with the new capability.”

All the data gathered by AS-15’s sensors in flight will be relayed in real-time to a ground station and evaluated by flight-test engineers. Most of the required sensors were installed in the jet on the production line, but the IAF also confirms that additional equipment can be installed in Israel, depending on the particular test being flown.

In the near future, Tel Nof AFB will also receive engineers from manufacturer Lockheed Martin to help the FTC’s personnel learn their way around the F-35I. “The IAF knows how to operate the “Adir,” but does not yet know how to operate an experimental model,” Lieutenant Colonel Y continued. “We need to receive the relevant knowledge in order to operate the aircraft and fly it prior to the testing process.”

Intriguingly, the commander of the FTC Squadron has said that he considers it likely that the United States will now “produce additional aircraft based on the current [AS-15] model for themselves.” This could take the form of a so-called “unlocked” F-35 that would be rigged up to make testing of all kinds a simpler, and less costly, proposition.

Whether the U.S. military also gets its hands on specially configured test F-35s any time soon, the future capabilities of the IAF’s frontline “Adir” fleet can now be more fully explored thanks to the latest equipment for Tel Nof’s Flight Testing Center.