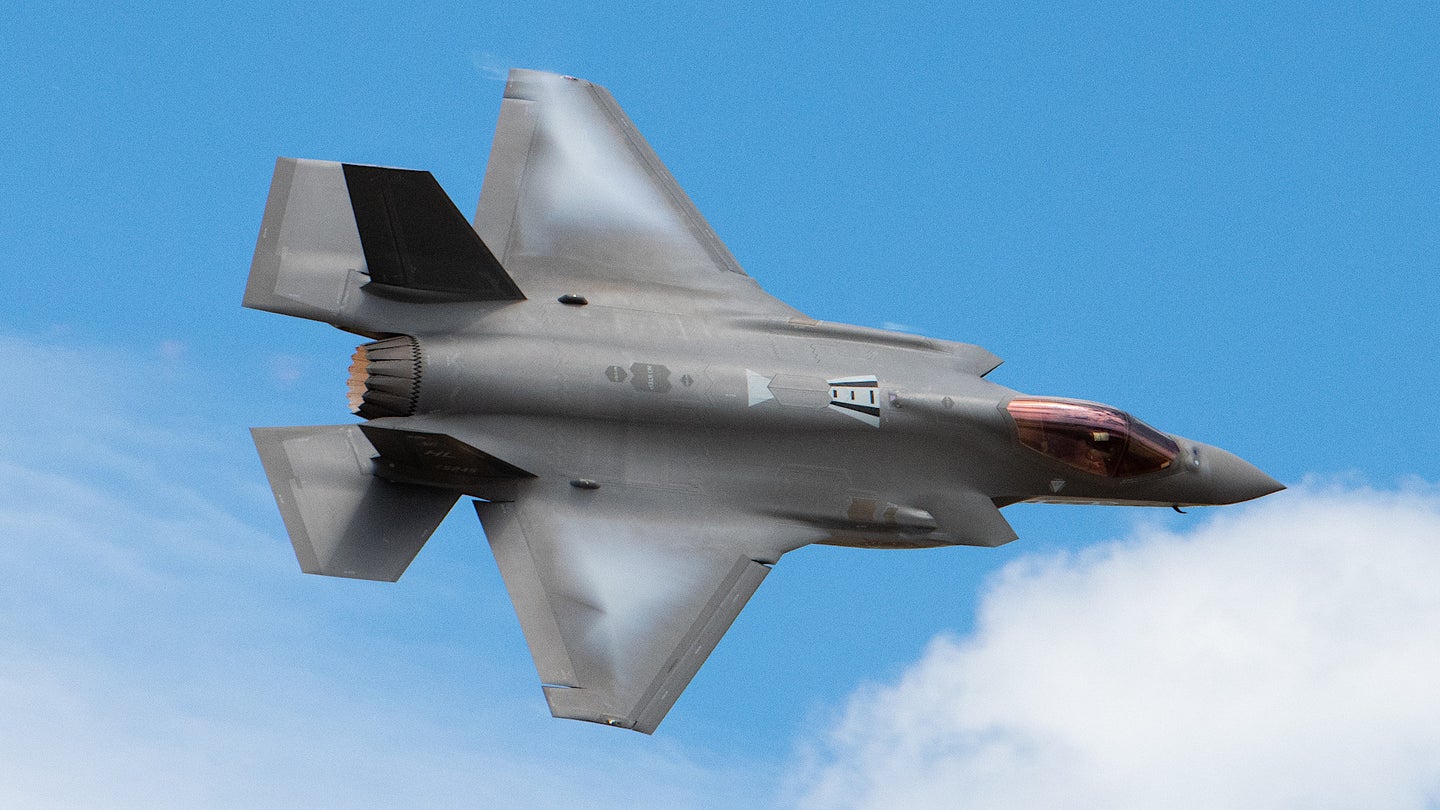 After weeks of reports that the U.S. government has been planning to sign off on the possible sale of various aircraft, including F-35 Joint Strike Fighters and MQ-9B drones, as well as other weapons and military equipment, to the United Arab Emirates (UAE), it has now formally approved three major proposed arms deals. These packages include up to 50 F-35As, 18 MQ-9Bs, and a multitude of air-delivered munitions, such as stealthy AGM-154E Joint Stand-Off Weapon-Extended Range cruise missiles, as well as other ancillary items, all valued at nearly $23.4 billion in total.

The U.S. military's Defense Security Cooperation Agency (DSCA) officially announced that the U.S. State Department had approved the potential sales on Nov. 9, 2020. There is still a need for Congress to grant its own approval for the deals. These various approvals also do not reflect a finalized agreement by the United Arab Emirates and exactly what that country decides to purchase, and what it will cost, could be subject to change in the future.

"This is in recognition of our deepening relationship and the UAE’s need for advanced defense capabilities to deter and defend itself against heightened threats from Iran," U.S. Secretary of State Mike Pompeo said in a statement prior to the posting of the DSCA announcements. "The UAE’s historic agreement to normalize relations with Israel under the Abraham Accords offers a once-in-a-generation opportunity to positively transform the region’s strategic landscape."

Full descriptions of the contents of the three possible sales are as follows:

The most notable of the three proposed deals is the F-35A package, which is also the most expensive of the trio, at approximately $10.4 billion. As had previously been reported, the package includes up to 50 Joint Strike Fighters, which the UAE has been interested in acquiring for years now.

Of the additional items mentioned therein, it is important to note that this sale would include Operational Data Integrated Network (ODIN), the replacement for the much-maligned Autonomic Logistics Information System (ALIS). ODIN, like ALIS before it, is the "computer brain" behind the F-35A and consists of a cloud-based network supporting hardware at bases, as well as in the jets themselves, which is used for everything from maintenance and logistics management tasks to mission planning and debriefing. You can read more about ALIS and ODIN in these previous War Zone pieces.

has previously explored in-depth how ODIN could be at the core of various export controls designed to limit any potential risks of a UAE Joint Strike Fighter fleet to Israel. If the UAE does ultimately acquire these F-35As, it will be the first country in the Middle East beyond Israel to receive approval to do so. The U.S. government had long opposed the sale of any Joint Strike Fighters to other countries in the region in order to meet a legally-mandated requirement to preserve Israel's so-called Qualitative Military Edge (QME) in that part of the world.

Talk of the possible sale of F-35s to the UAE following the signing of the Abraham Accords in September quickly became a major source of controversy within Israel. Those concerns have increasingly appeared to have been tempered in recent weeks with talk of various assurances from the United States that the deal will not negatively impact Israel's national security interests.

"The proposed sale will make the UAE even more capable and interoperable with U.S. partners in a manner fully consistent with America’s longstanding commitment to ensuring Israel’s Qualitative Military Edge," Pompeo said in his statement.

The possibility of other arms sales to the UAE had been much less of an issue for Israel. The DSCA notices still provide important insight into those prospective deals, though.

It had previously been unclear exactly what the configuration might be for the MQ-9Bs, which is a variant of the U.S. Air Force's MQ-9A Reaper. We now know that the drones being offered to the UAE, at least in part, would be configured in much the same way as their American counterparts, armed with Hellfire missiles and Joint Direct Attack Munition (JDAM) precision-guided bombs, as well as examples now entering service with the U.K. Royal Air Force (RAF).

However, the package also very notable includes maritime surveillance and anti-submarine warfare systems, including maritime surface search radars and sonobuoy launchers. It's not clear how many of the MQ-9Bs would be in this configuration, but it would offer new and important over-water capabilities to the UAE, which you can read about more in the War Zone's recent reporting on this prospective drone sale.

This proposed MQ-9B sale also notably comes after the U.S. government decided to reinterpret various provisions of the Missile Technology Control Regime (MTCR) arms control pact to make it easier to export higher-end drones. With the Air Force, the largest Reaper operator, looking to halt purchases of those unmanned aircraft and replace that fleet, this deal could also be an important windfall for the manufacturer, General Atomics.

The aerial munitions package is the one that there had been the least previous reporting on and is absolutely massive in size and scope. Since the proposed F-35 deal includes no weapons, it appears that these are at least partially intended for those jets and would provide the UAE with a full range of air-to-air and air-to-ground ordnance for those aircraft.

One of the most notable components of this possible deal is 50 AGM-154E Joint Stand-Off Weapon-Extended Ranges (JSOW-ER), a powered cruise missile version of the stealthy JSOW glide bomb family, which you can read about in more detail in these previous War Zone pieces. The UAE already had stocks of earlier AGM-154 variants, which provide an important standoff capability, especially in the suppression and destruction of enemy air defenses, a mission set commonly referred to collectively as SEAD/DEAD.

It's not clear if the Emiratis already have the AGM-154C-1 variant, which has an imaging infrared seeker that also gives it a demonstrated anti-ship capability, or could receive it as part of this new package. Regardless, the JSOW-ER offers the ability to conduct those kinds of strikes at significantly greater ranges than its unpowered predecessor.

There 150 AGM-88E Advanced Anti-Radiation Guided Missiles (AARGM) in the package, also primarily intended for suppression of enemy air defenses. These missiles are capable of carrying out time-sensitive strikes against other fleeting targets, as well, using their multi-mode guidance system, which you can read about more in this previous War Zone piece.

The arms package also includes a huge lot of 802 AIM-120C-8 variants of the Advanced Medium-Range Air-to-Air Missile (AMRAAM). This version of the AMRAAM has some of the improvements found on the more substantially upgraded AIM-120D variant, including a two-way datalink that allows third-party targeting. However, it does not have the extended range of the D, which you can read about in more detail in this past War Zone piece. Still, those missiles would give the UAE significant new air-to-air capabilities.

This prospective deal also includes very large numbers of multiple types of precision-guided bombs, as well. A basic breakdown of what the UAE could be in line to buy in that regard is as follows:

It's worth noting that the UAE's fleet of F-16E/F Desert Falcons, some of the most advanced versions of the F-16 series in service today, should be able to carry all of these weapons, as well. Together with the F-35s, this would give the Emiratis a very impressive combat jet mix.

The United States clearly sees all three deals as both a reward for UAE's agreement to normalize relations with Israel and a major boost to that country's military capabilities, with which it could further challenge mutual regional adversaries, chiefly Iran. "Our adversaries, especially those in Iran, know this and will stop at nothing to disrupt this shared success," Pompeo said in his statement.

Of course, it remains to be seen whether Congress will ultimately approve these deals and whether a new presidential administration under Joe Biden, which seems increasingly inevitable despite legal challenges to the recent election from President Donald Trump's campaign team, might alter these proposed sales in some way. A number of legislators have, in the past, been extremely critical of arms sales and other military support to the UAE over its involvement in the conflict in Yemen. In addition, a representative of the Biden campaign team had previously said there might be a future reexamination of the F-35 sale, specifically, if he were to win the election, as it appears he has done now.

If any of these sales, especially the F-35 deal, do come to pass, it could have ramifications for further arms deals in the region. Saudi Arabia, notably, has also expressed interest in buying Joint Strike Fighters in the past, though it has not yet normalized relations with Israel.

No matter what happens, the Trump Administration, which will continue to serve at least through Jan. 20, 2021, is clearly seeking to push ahead with the sales of state-of-the-art aircraft and other weapons and military equipment to the UAE.